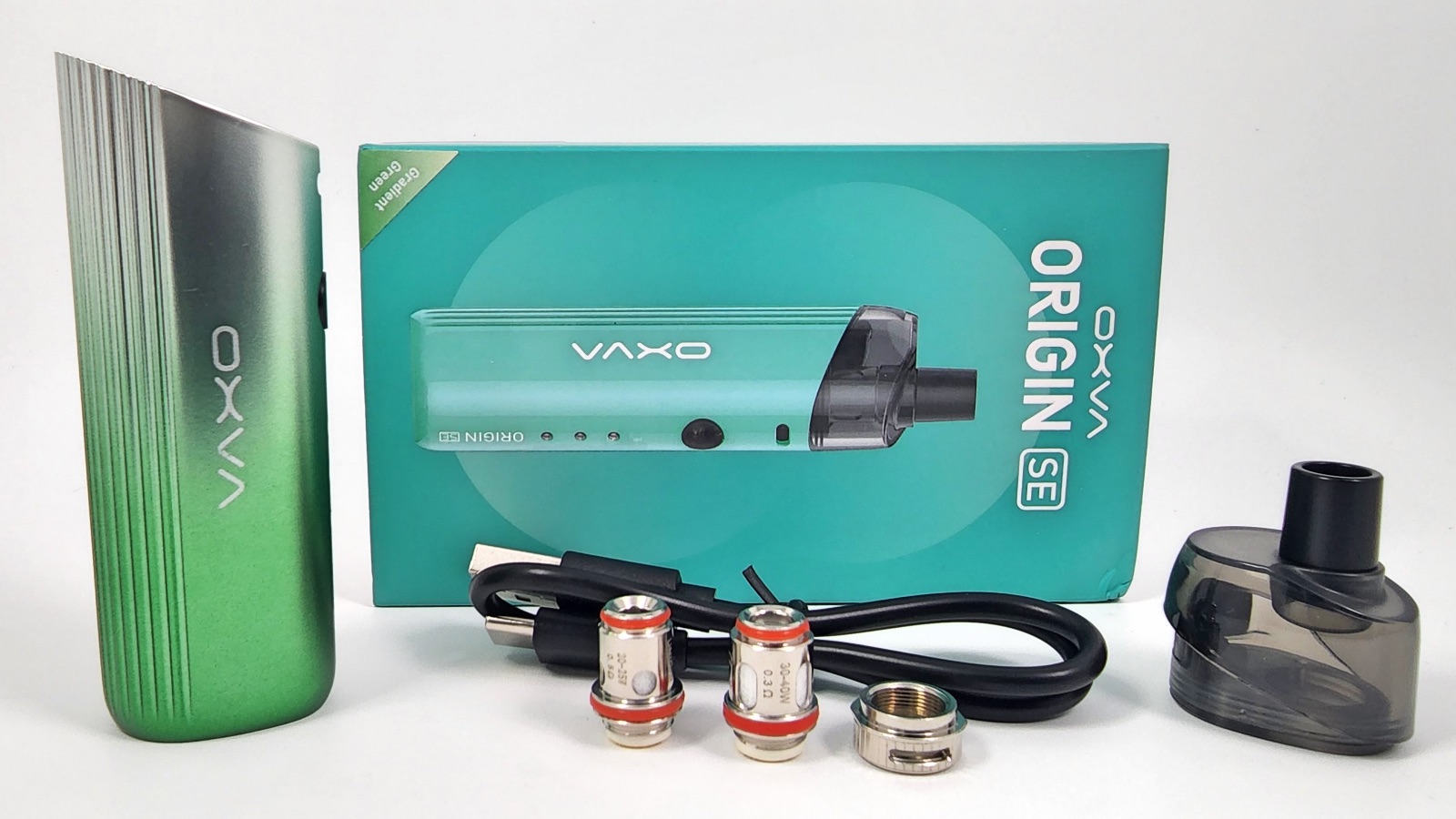 The Origin SE was sent to me for review from OXVA. This is a pod device similar in the way it’s built and how it functions to other replaceable pod devices like the Aegis Boost, except that it’s much smaller. 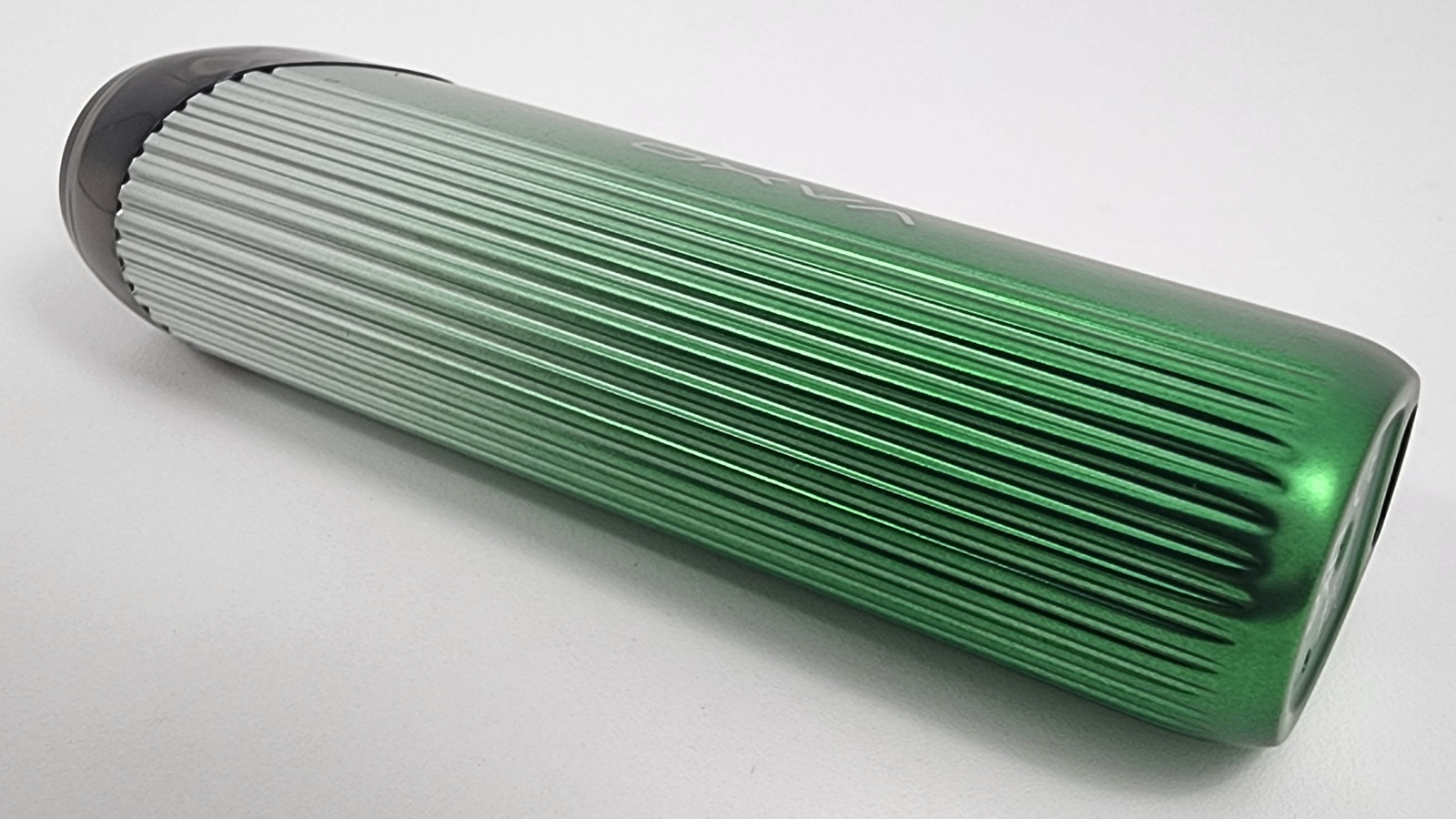 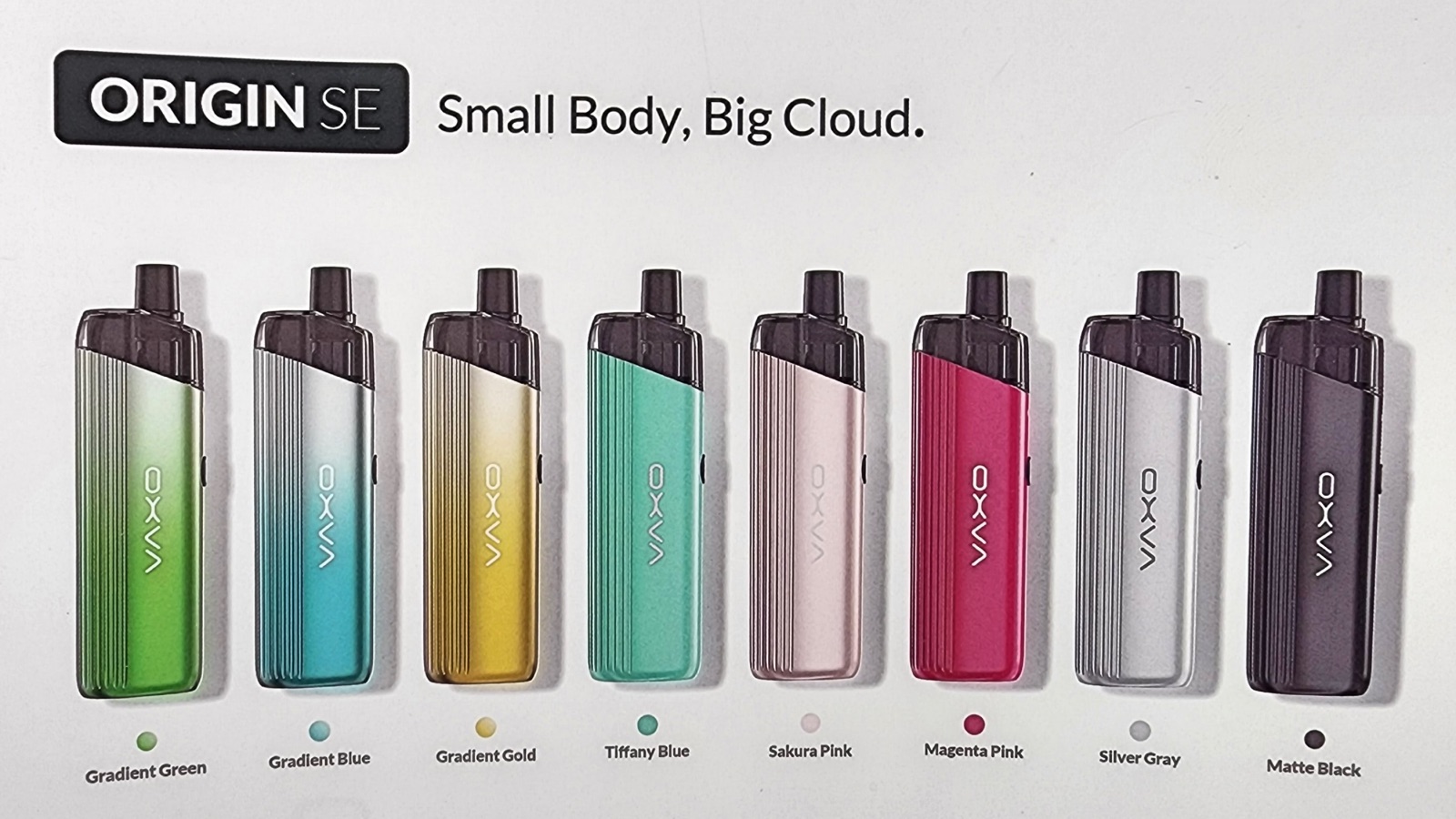 Oxva designed the Origin SE to be extra compact, and it is at only 53g in weight. It’s hard to explain how light that is, but it’s super light. 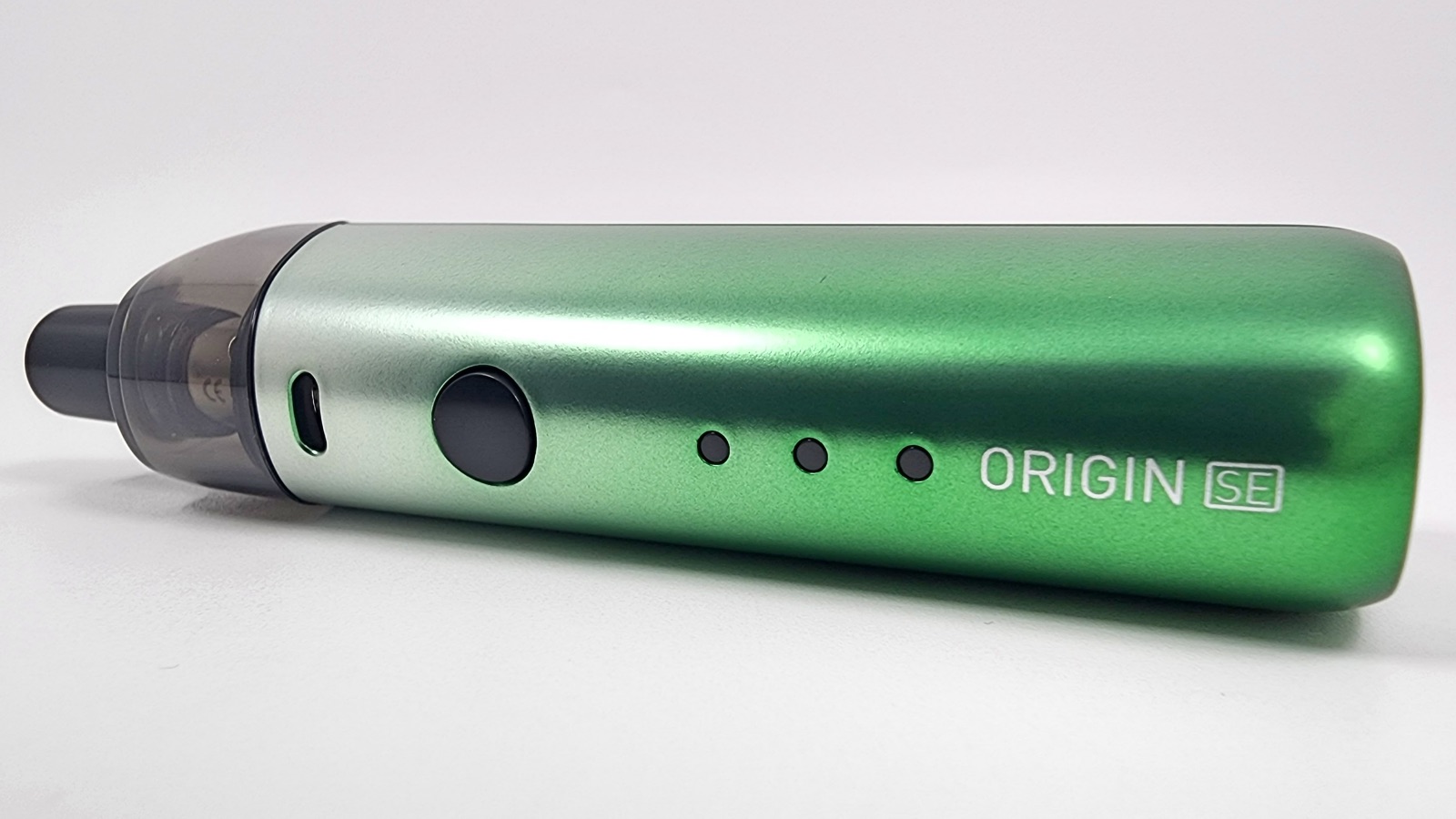 To turn the Origin SE on, press the firing button five times fast. The Origin SE works with either auto-draw or manual draw, and both are on at all times, so you can choose how you want to vape at any time. Auto-draw works well, but you have to draw hard to get a hit. I feel like I get a better and stronger hit by using the firing button and without having to take a hard pull on it, so that’s what I prefer.

There’s also a lock feature on the Origin SE, if you want to prevent it from firing. Click the firing button four times fast to turn that off and on.

There are three power levels to pick from here; low, medium, and high, which you can change by pressing the firing button three times fast. I’ve found that each power level has enough of a wattage difference between each other that they really are noticeable, so I think the power levels work really well.

The LEDs on the front panel indicate which mode you’re in. One light is low, two is medium, and three is high. Each power level auto-adjusts to a specific power output depending on the coil you use. 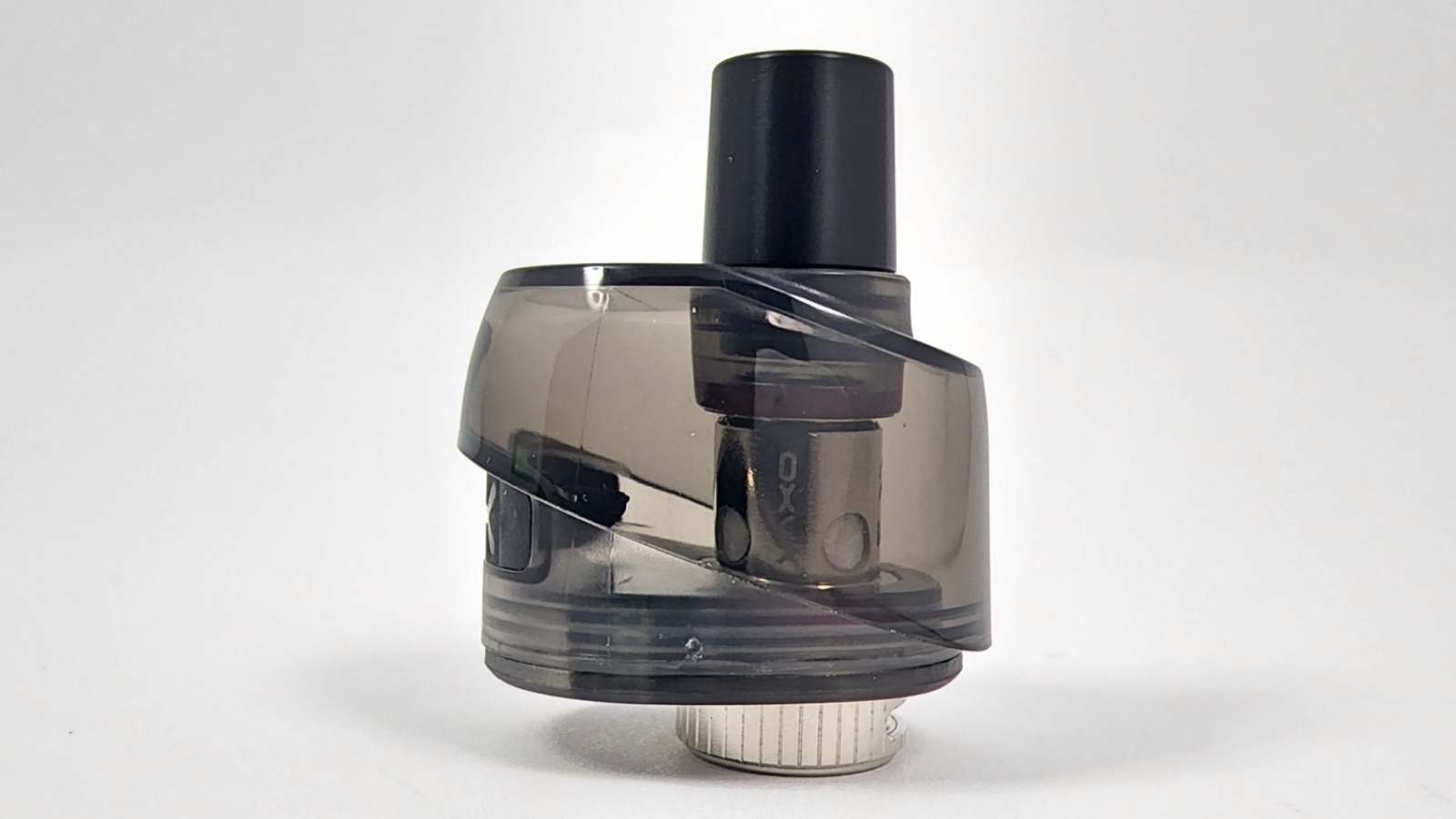 The pod comes with a 3.5 ml capacity or 2ml for TPD regulations. 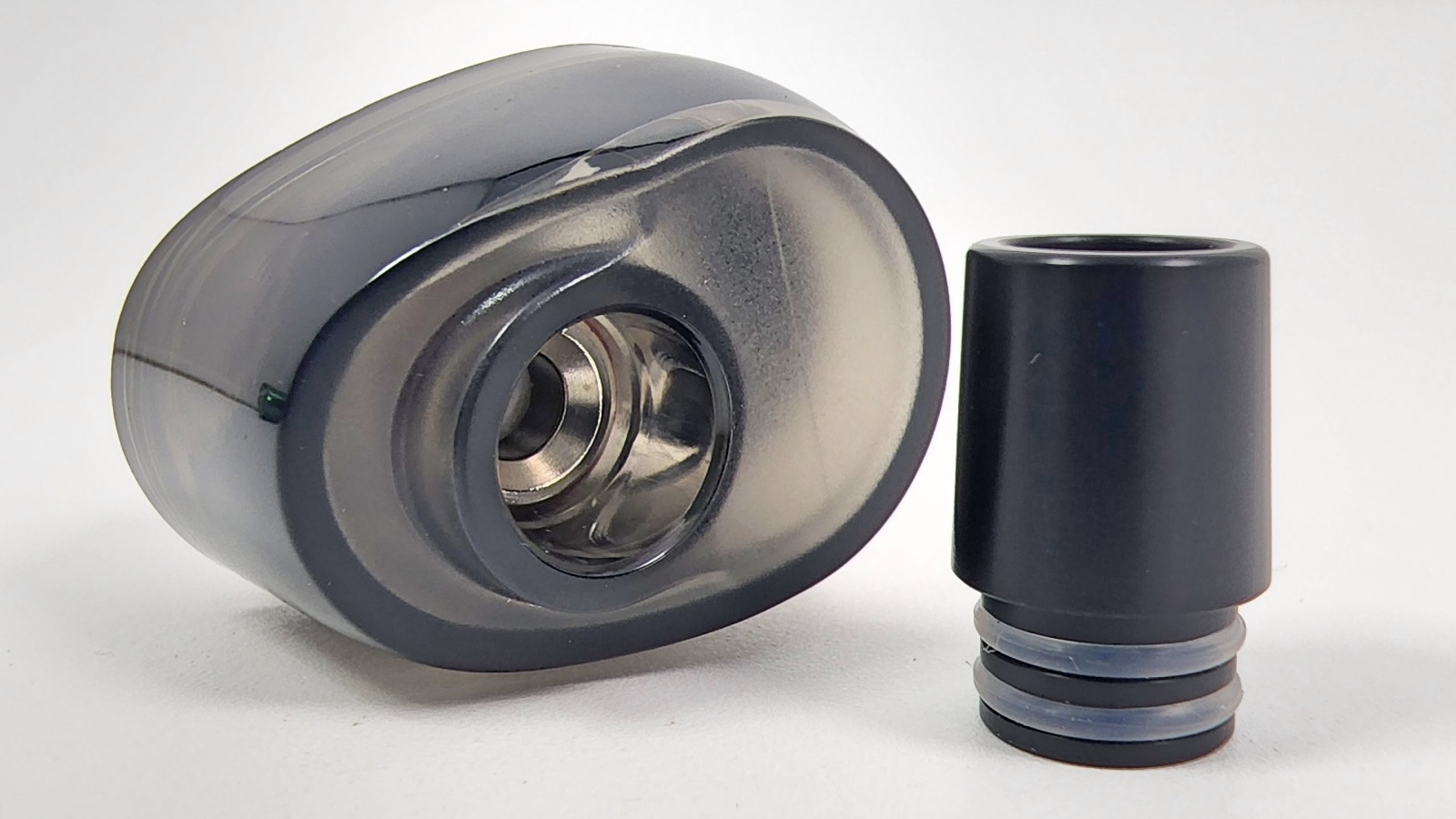 The round mouthpiece at the top is a 510 tip and is removable, so you can use another tip here, too, if you want. 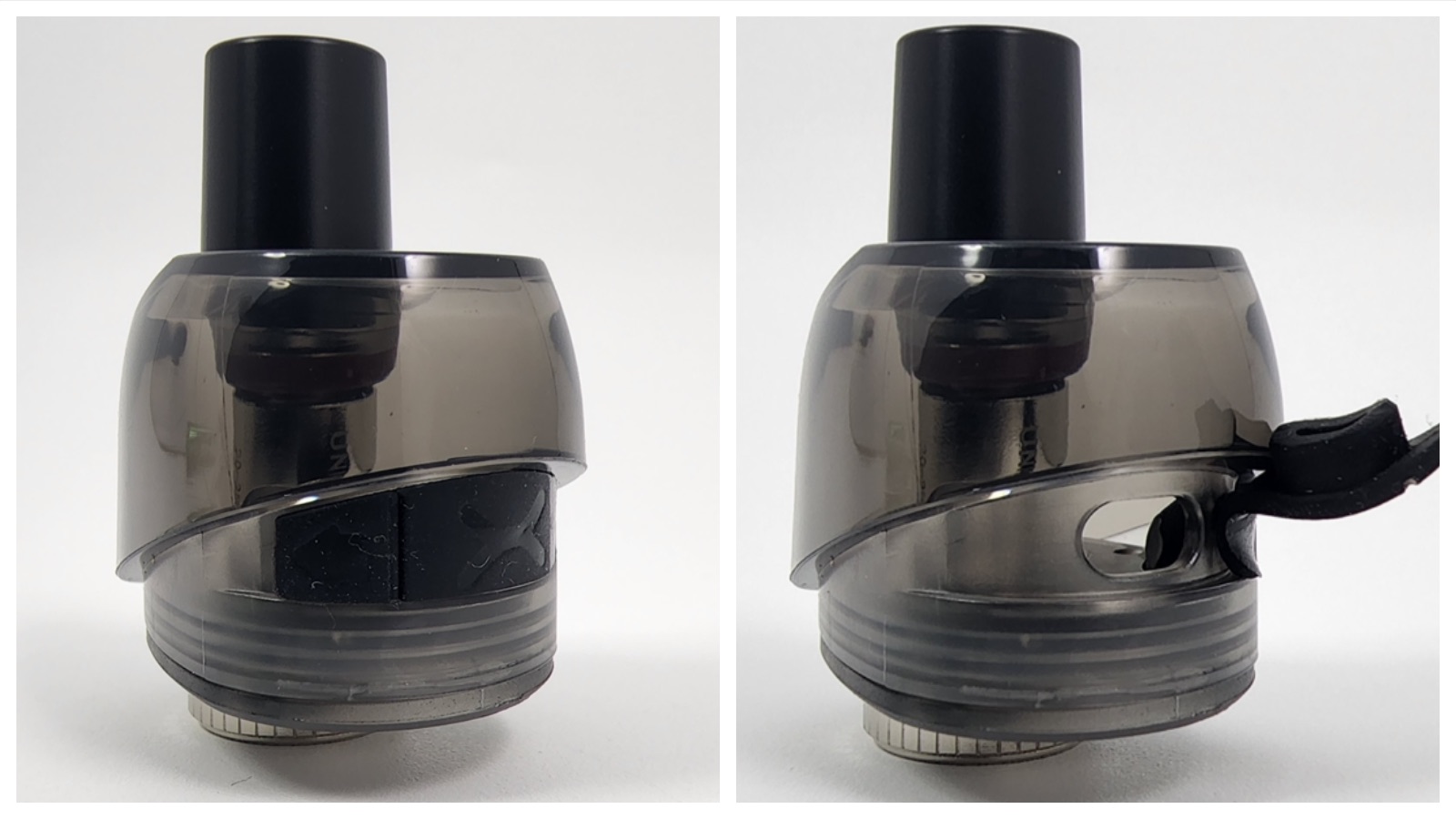 The liquid fill port is on the back of the pod and uses a rubber seal. You need to take the pod out of the device to fill it up. 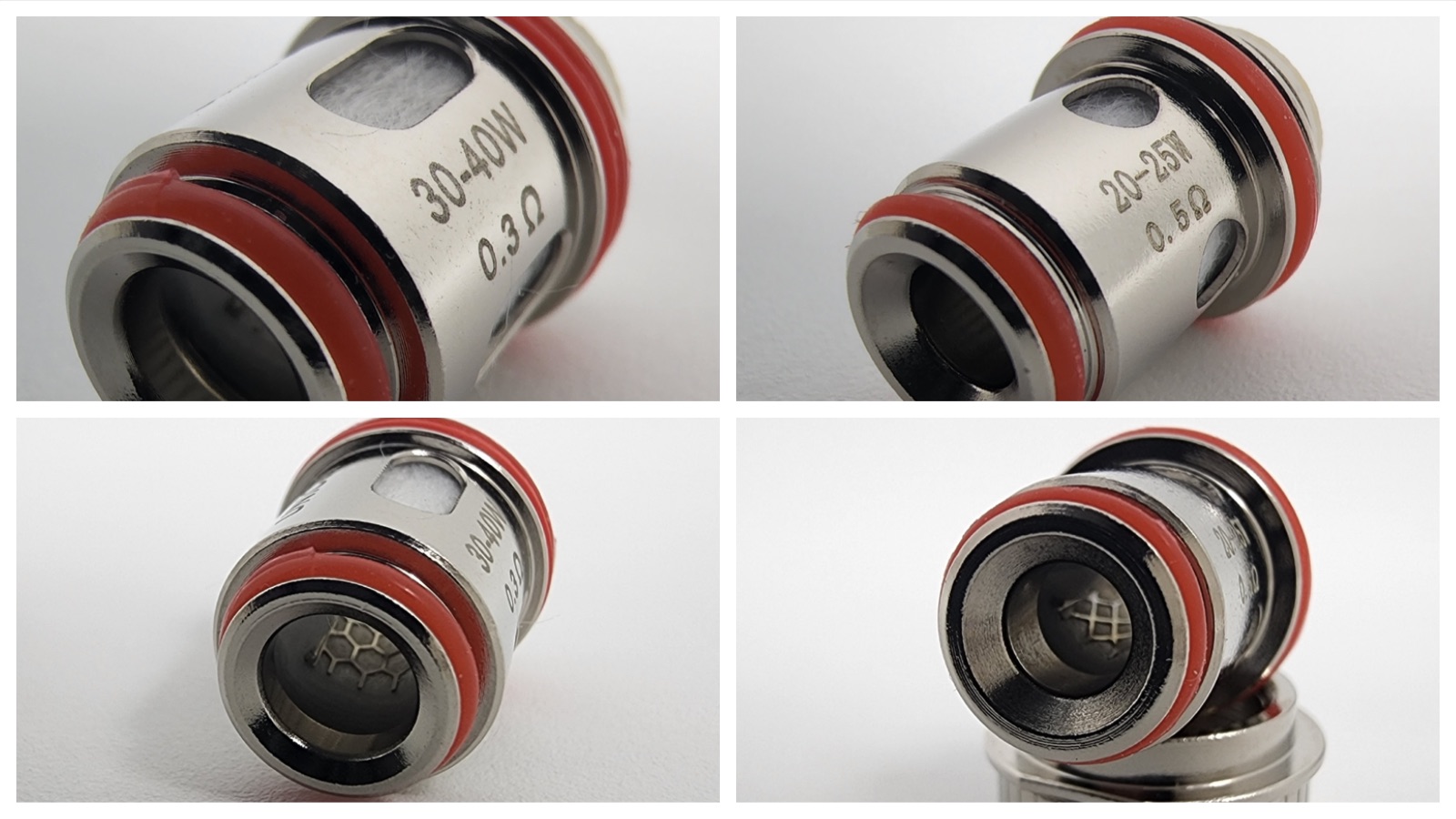 0.3 Ohm – This coil is rated for 30-40 watts, so it’s going to be best for low nicotine and big hits. I’m getting huge hits and lots of flavor. I’ve been vaping Peach Pear, which is my favorite flavor from the BLVK Hundred line, and the flavor is excellent. I feel like I’m really getting everything out of it.

0.5 Ohm – This coil is rated for 20-25 watts, so it’s still going to work best for low nicotine and big hits. The hits aren’t as big as the 0.3 Ohm coil, but they’re still big and also a lot more efficient. I’ve found my tank staying full for a long time, even when chain vaping this coil. The flavor production is really good too.

0.1 Ohm – This coil is rated for 10-15 watts, so this would be better for higher nicotine and probably tight-draw hits. This is also a Kanthal coil rather than a mesh coil, so the flavor is probably not as good as the other coils. They didn’t send me one of these to test, so I can’t tell you these things for sure. 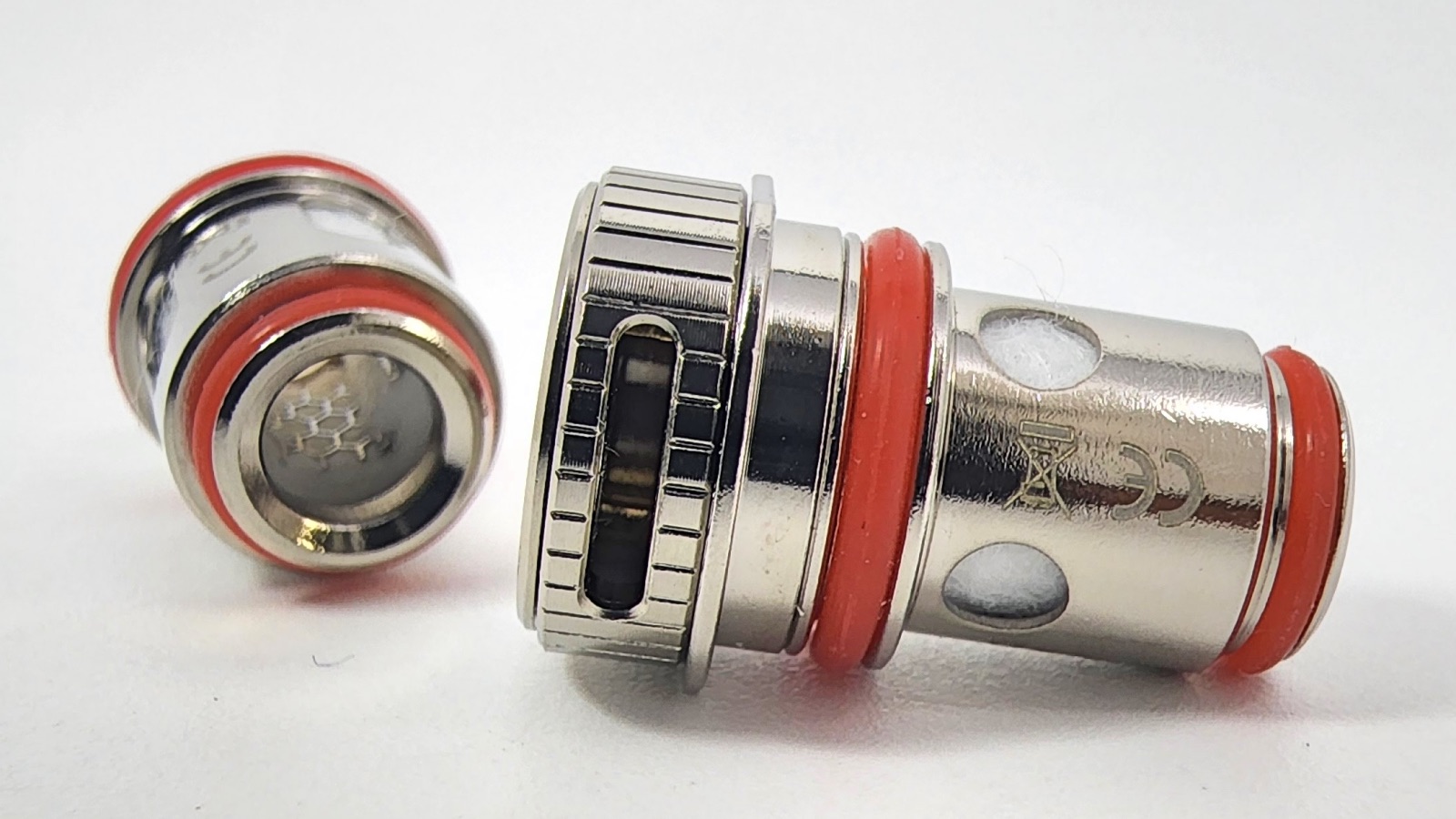 These coils have the airflow adjustment rings built in, which I actually really like. 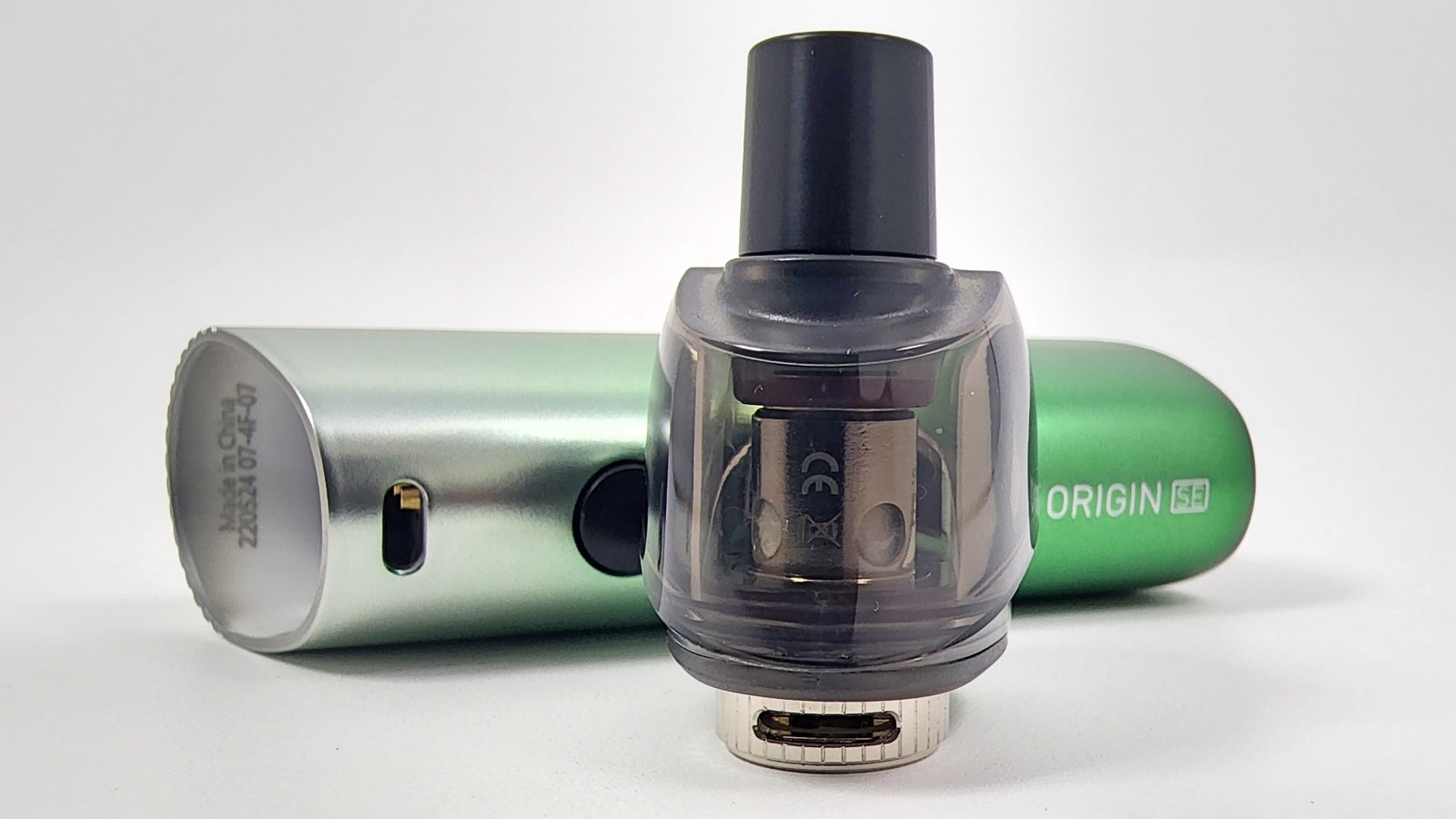 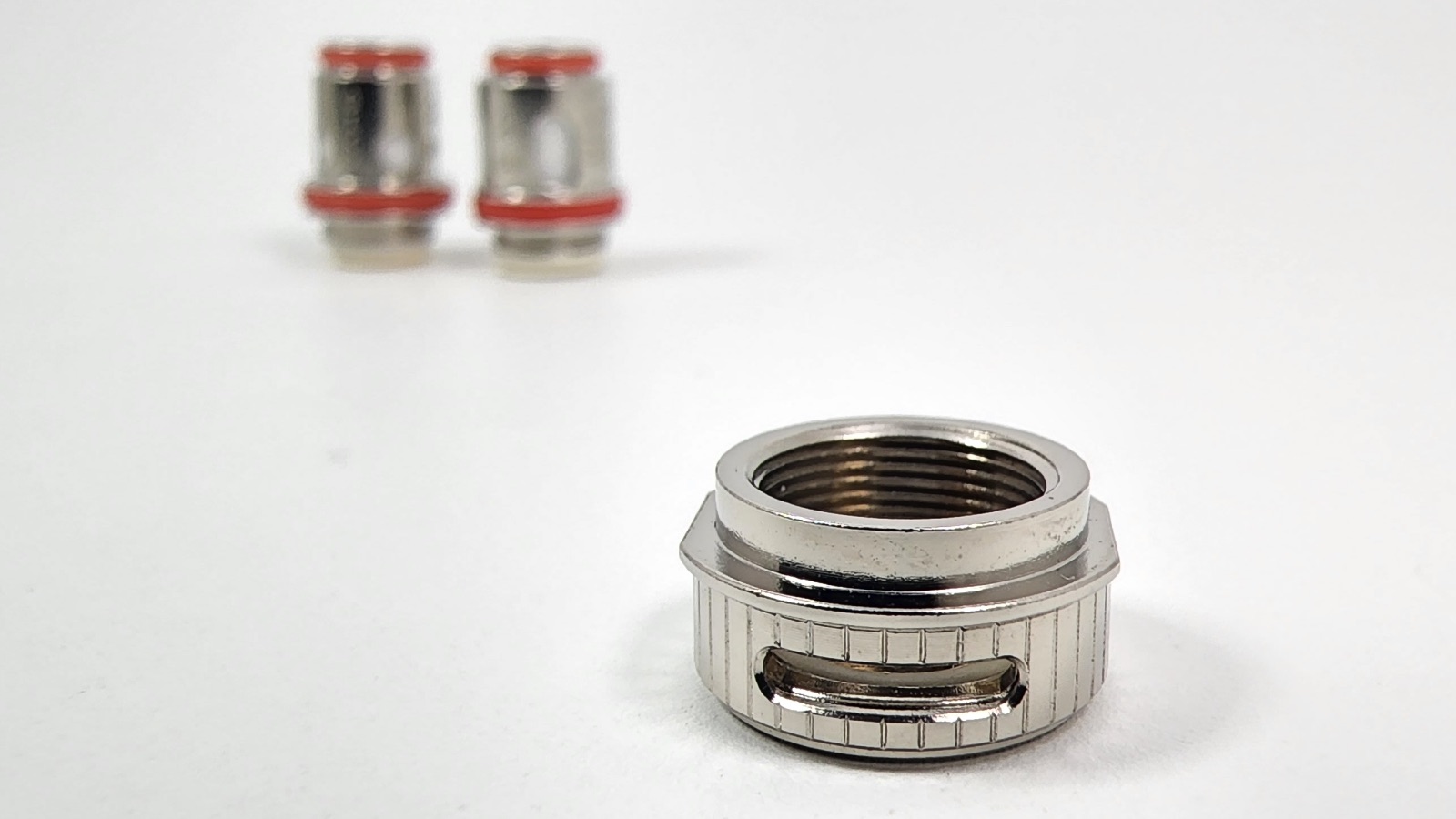 And it’s really not difficult to use anyway. Just pull the pod out and move it. The airflow ring works great too. With the airflow wide open, you get a lot of airflow for big hits, halfway open and it’s a restricted lung draw, and if you leave just a little open, you can get some pretty good tight-draw mouth-to-lung hits. I’m impressed at how well this can do both MTL and Lung Hits. 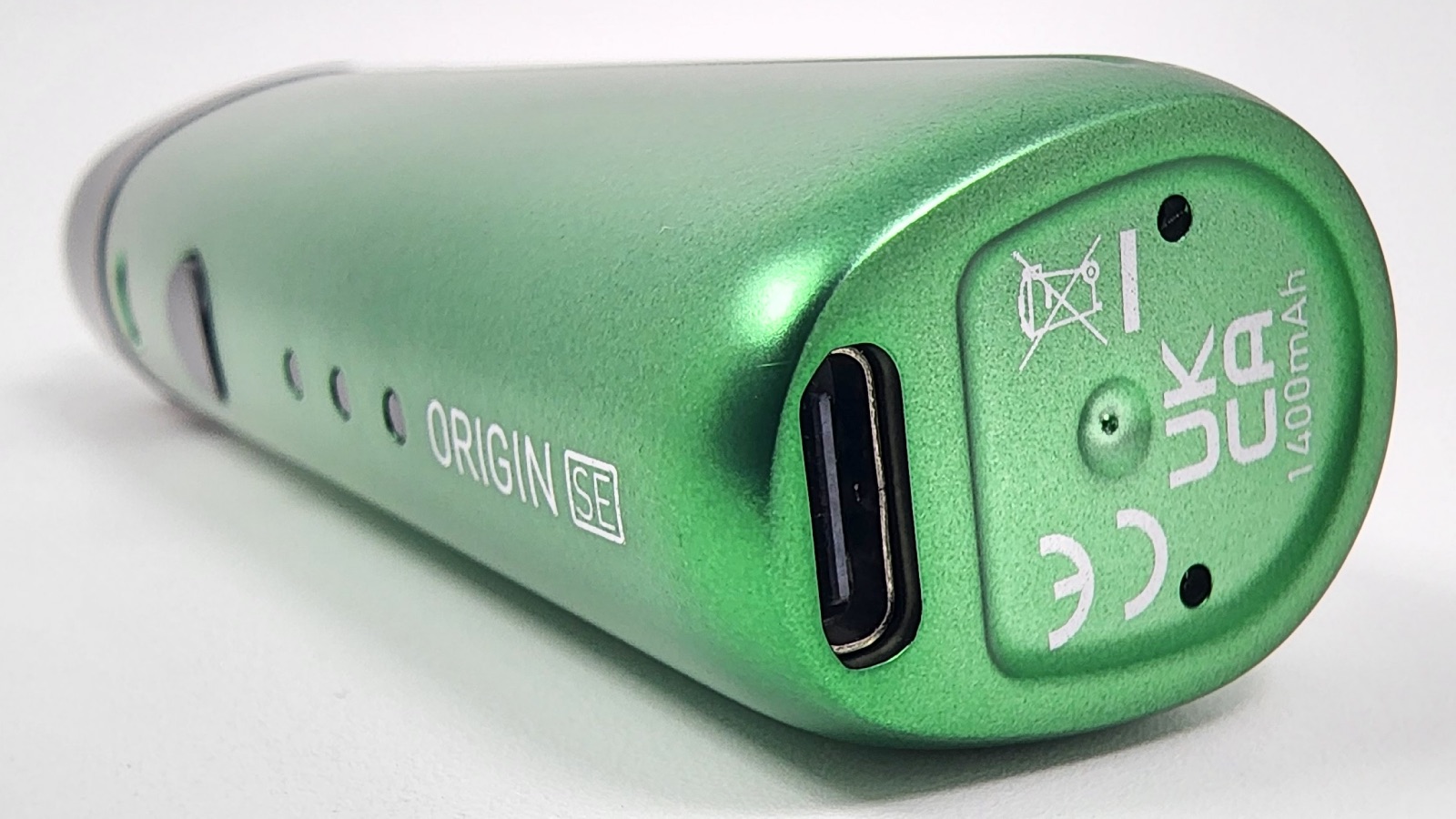 The internal battery inside the OXVA is a 1400mAh battery. That’s a good-sized battery for a pod device and especially for a device this small. It charges using USB-C with 5v/2a charging, so you can get it charged up to 80% in just 30 minutes.

The LEDs on the front panel display different colors depending on the charge of the battery. Green lights mean it’s above 65% charge, blue is 30-65%, and red means it’s below 30% charge.

The Origin SE is a really good pod system. It’s super light, the flavor production is excellent, the airflow adjustment works great, it has basic adjustable wattage settings, and it just performs really well. And the coils are great too. I’ve been chain vaping, and there’s no slow-down in how these perform – no dry hits and always great flavor. The plastic body of the Origin SE feels a little cheap, so that’s a drawback, but that also makes it so light, and it doesn’t impact the performance, so other than that, I really don’t have anything to complain about.