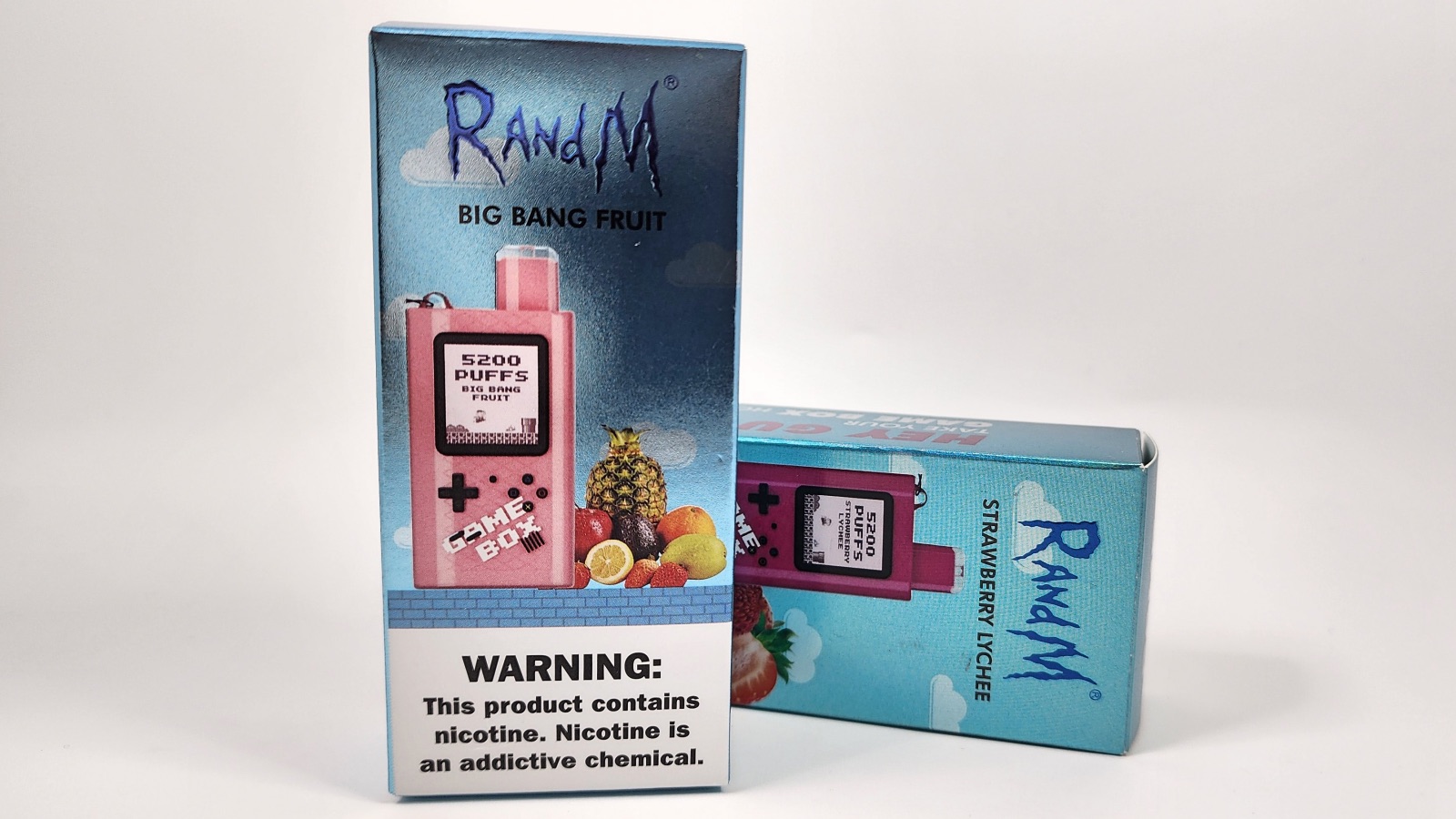 The Game Box disposables were sent to me for review from Fumot. These come from their brand, RandM (pronounced R and M). These are square box-shaped rechargeable disposables with 12ml of e-liquid and a video game theme. 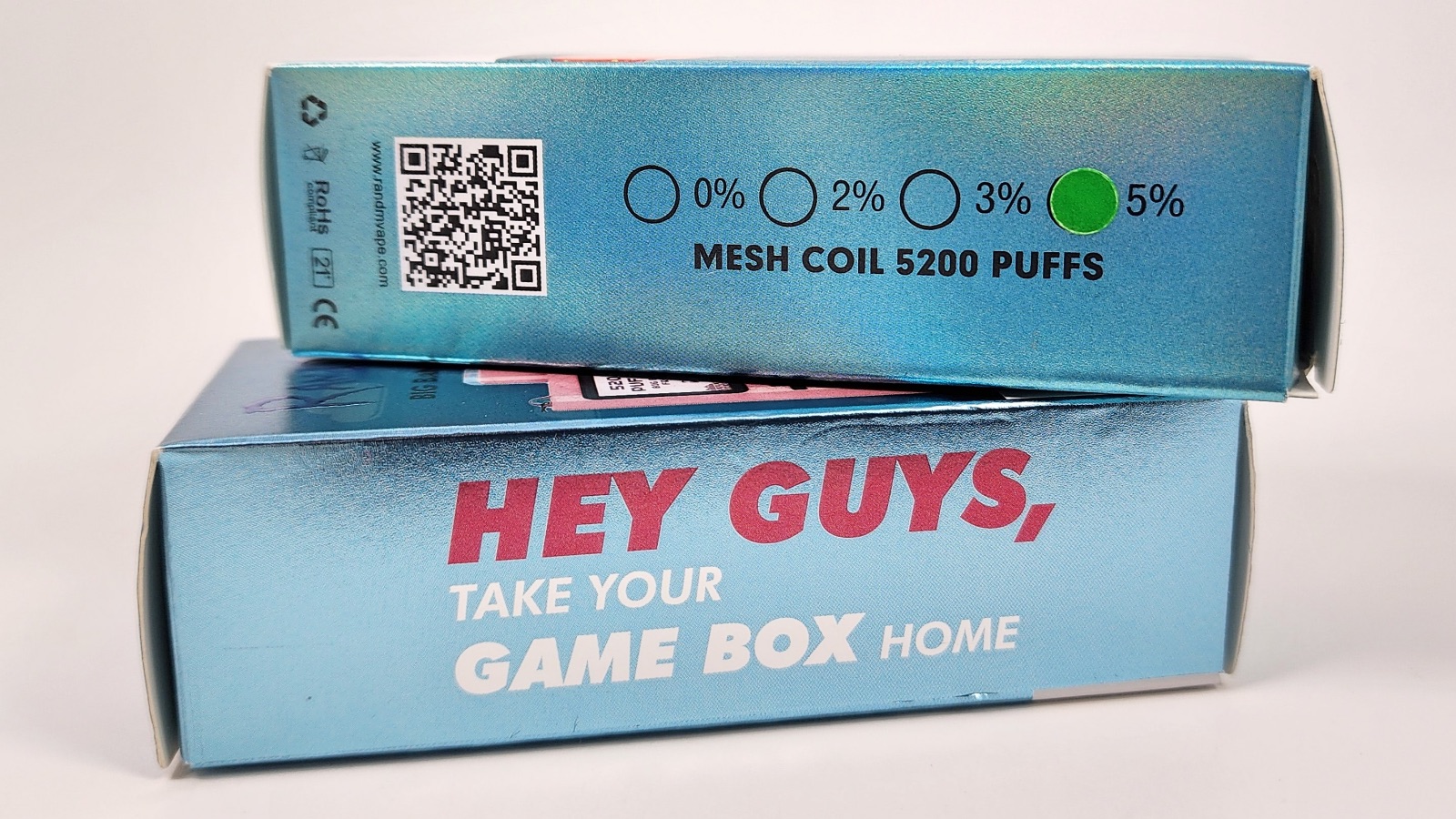 It Has a Gameboy Design 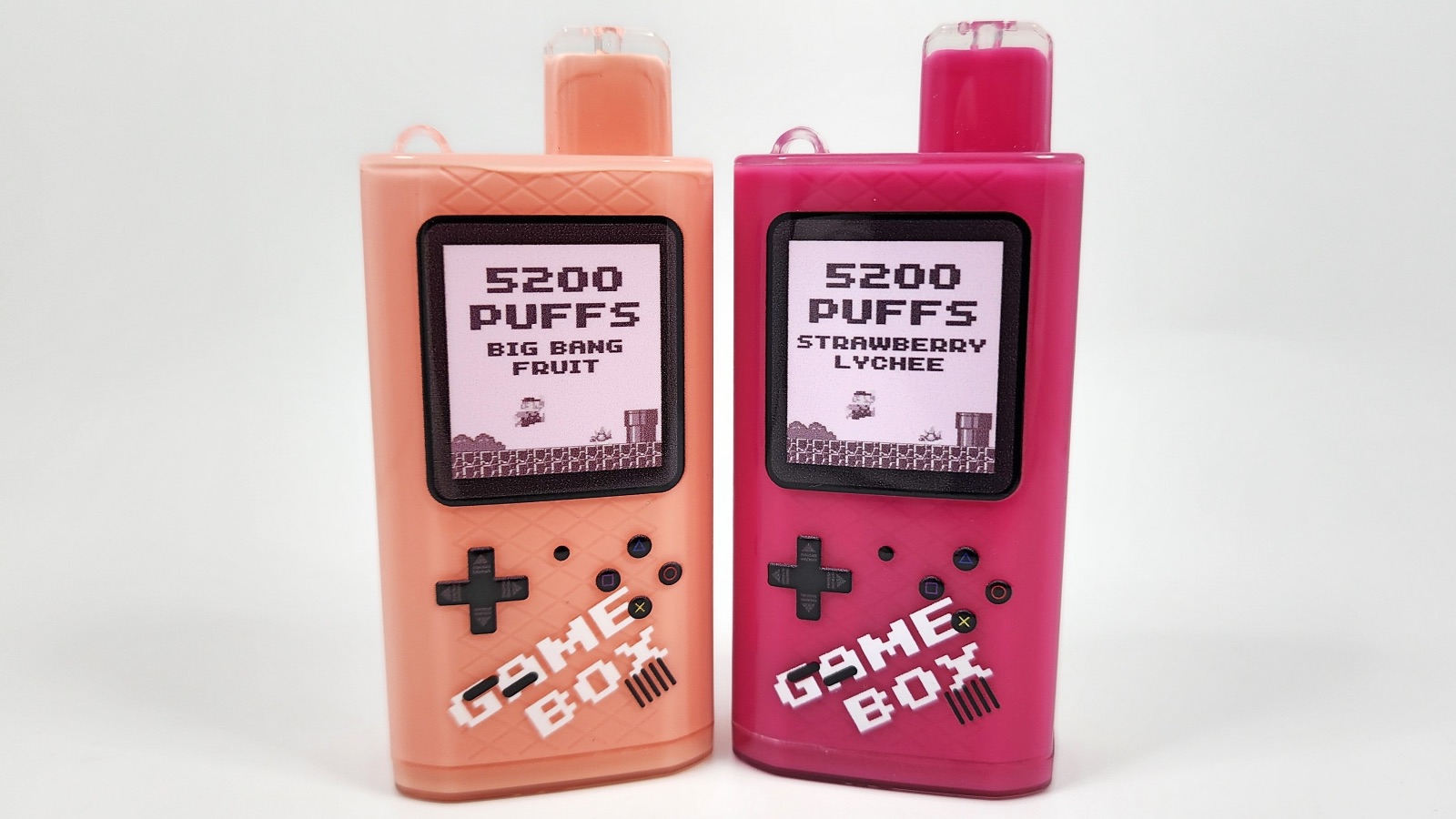 RandM has gone all out on the video game theme here. These are clearly designed to look like an old-school Nintendo Gameboy. It’s rectangular, has game controller buttons, and a fake screen. It’s mostly like a Gameboy, but instead of the Gameboy’s A and B buttons, it has the Sony Playstation’s buttons; Square, Triangle, Circle, and X.

Above the buttons is the fake game screen. The screen shows a screenshot from the first NES Mario Bros game. I have no idea if Fumot is actually allowed to use this screenshot on their products, but I’m not going to assume anything. Whatever the case is, I’m just going to say that this appeals to the gamer in me. 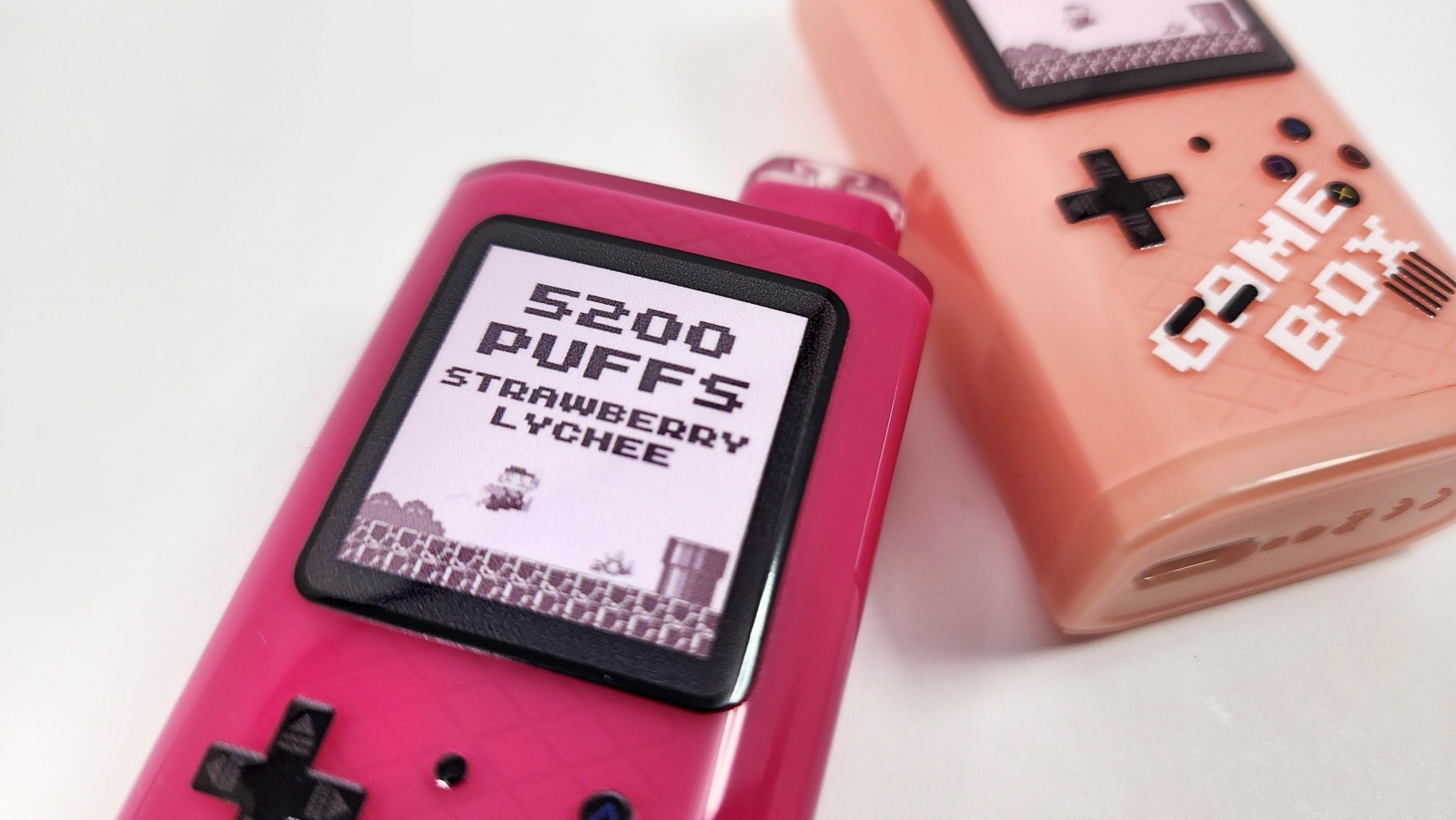 I have the usual; the NES, Super NES, Genesis, and PS1. But I’ve also got some of the more unusual systems like the Intellivision, Atari 2600, Atari Jaguar, Sega Master System, Dreamcast, and lots of others. I’m a huge game nerd! And I mention this just to explain why I like the Game Boxes so much.

The only thing that would’ve been better would be if Fumot used screenshots from other games on each device so that they would be different on each one.

Anyway, the design is printed on the device with a raised texture, so you can feel all of the buttons and parts. And if you turn the device around, there’s also some device branding, a descriptive picture of the flavor, and a flavor name. It all looks good and is printed in high detail. 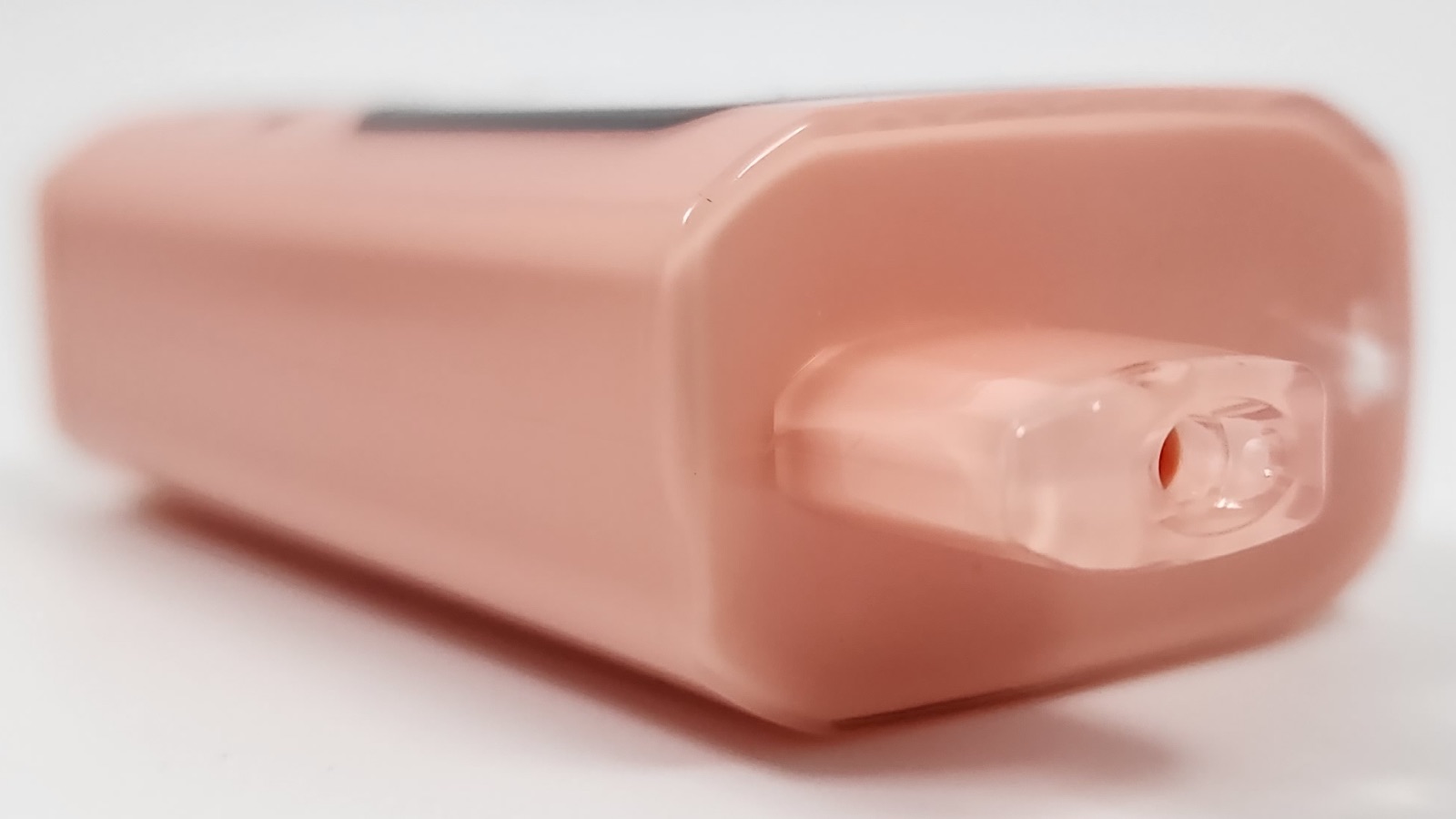 The mouthpiece is flat and comfortable to use. It’s the same color as the device and has a clear plastic layer over it. That clear layer comes up above the color at the top and adds to the look. 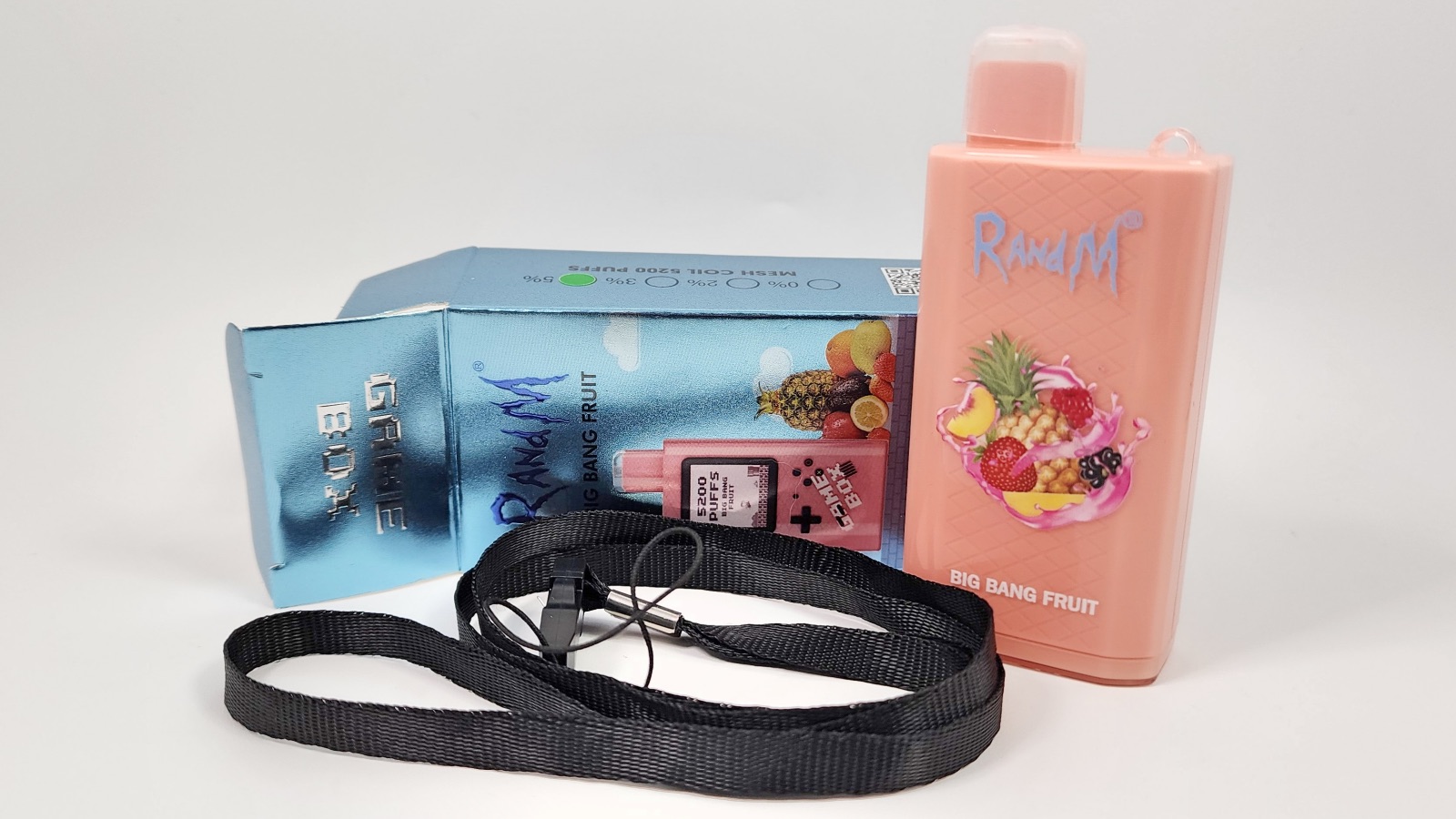 At the top of the device is also a little loop so that you can connect a lanyard. And the Game Box’s actually come with a lanyard in each package, so that’s a nice extra. It’s a fine lanyard. It’s a little skinny and thin, but it seems strong enough. It also has a connector so that you can easily remove the main lanyard cord from the end of the cord if you want. 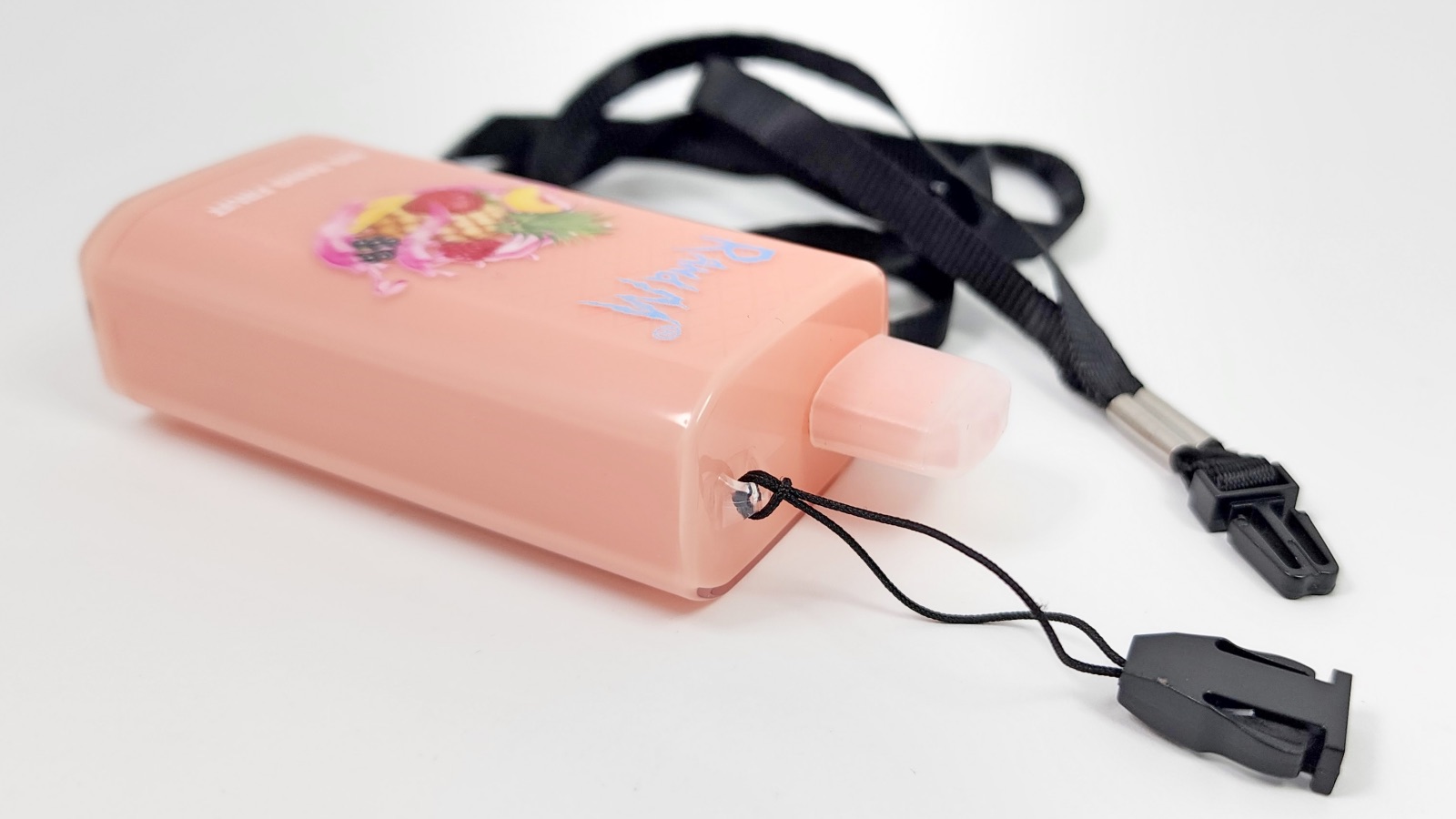 Fumot sent me two flavors to try, so let’s go over those: 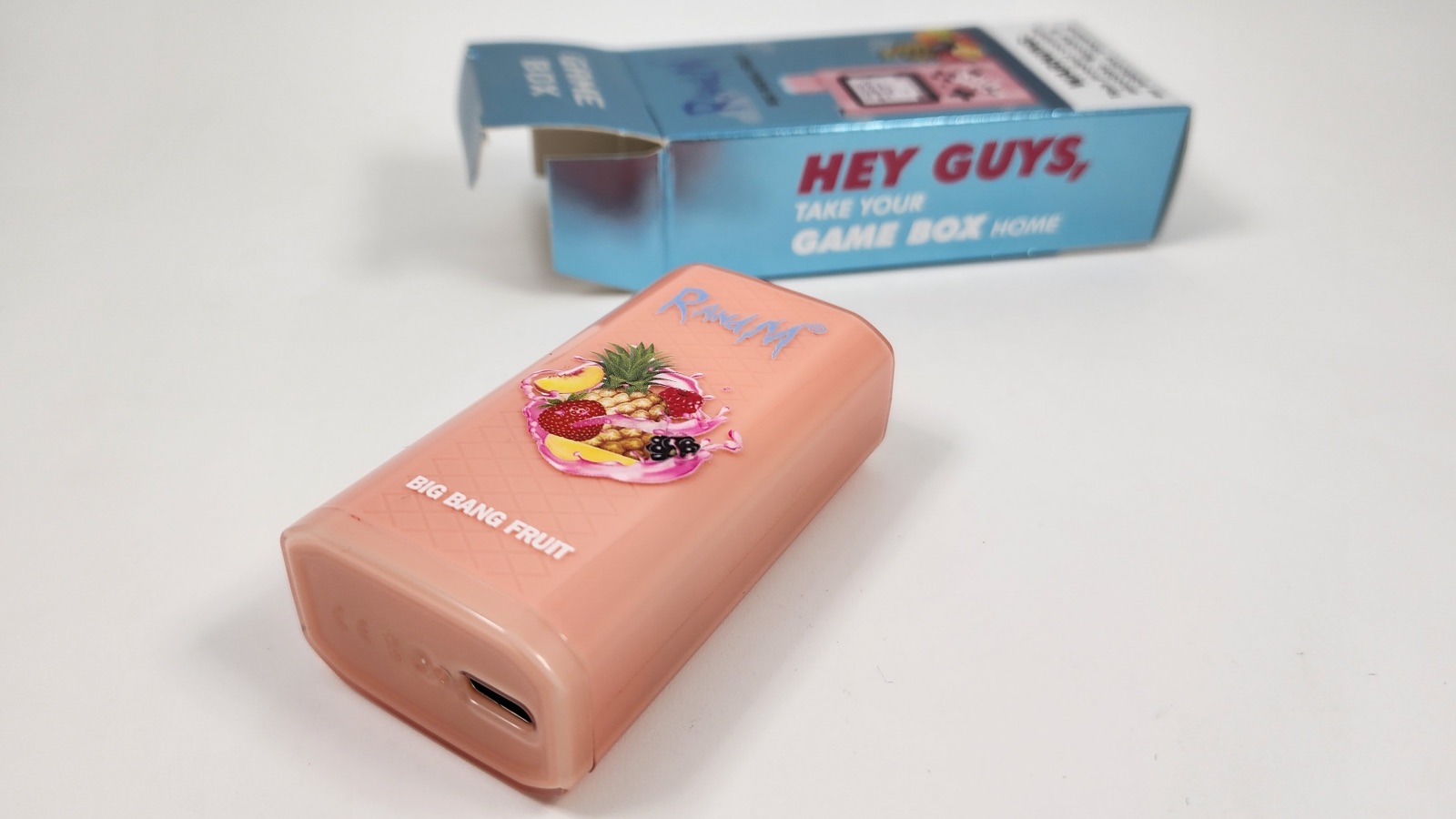 It’s not really clear exactly what this is supposed to taste like, but the picture on the device shows a pineapple, strawberry, blackberry, and peach. The picture on the box also shows a lime, apple, pear, and orange. I don’t know if all of those fruit flavors are actually in here, but this definitely just seems like a big mashup of fruit flavors. I’m not really able to pick any particular flavor out of here except for maybe that pineapple, which gives it just a slight tropical flavor. This has mint, too, so you’ll get that cool ice taste and feel from it. 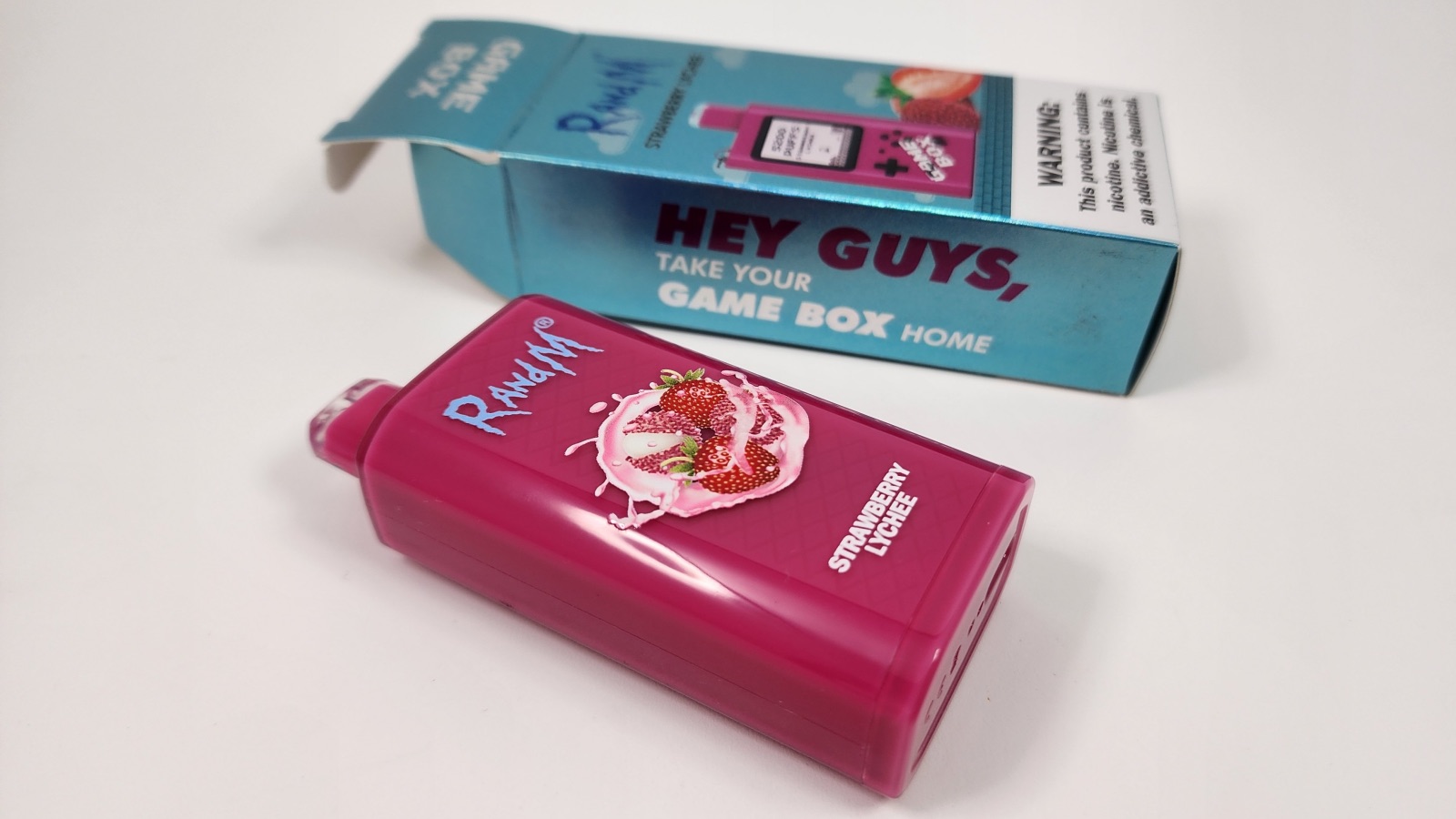 If you like lychee flavors, you’ll like this. The lychee flavor comes out very clearly. But you also get that strawberry flavor on top of it, which is really unique. Rather than a candy-ish artificial flavor, it’s more like a mix of natural lychee and strawberry flavors. It’s sweet but not overwhelmingly sweet.

So that’s just two flavors, but there are 20 in the full line:

It Has a Loose Draw 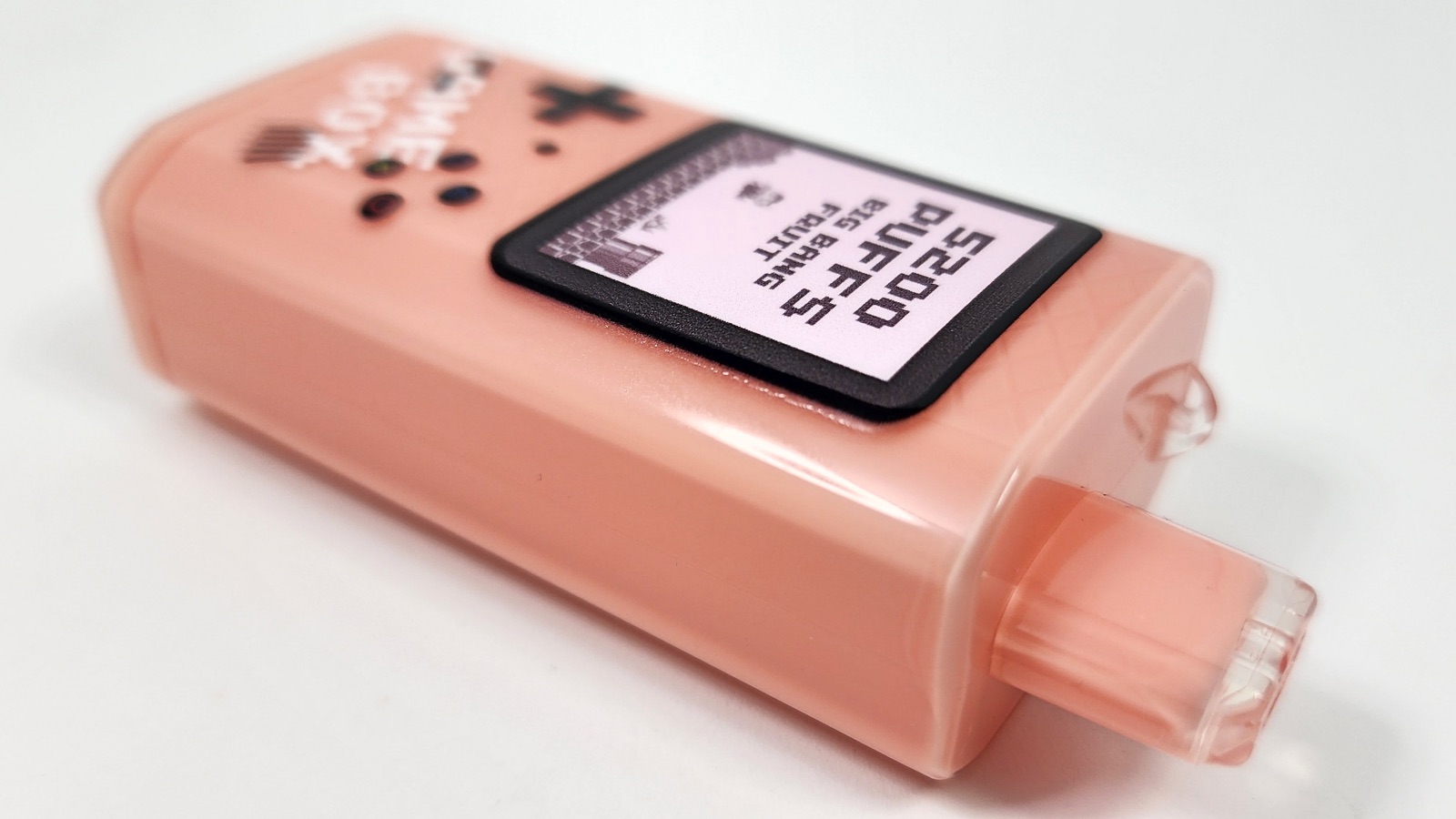 The draw is a little on the loose side, but the small mouthpiece and thin chimney help to make that loose airflow feel comfortable. I personally would have liked it if the airflow was a little more restricted, but I’m also fine with how it is currently. 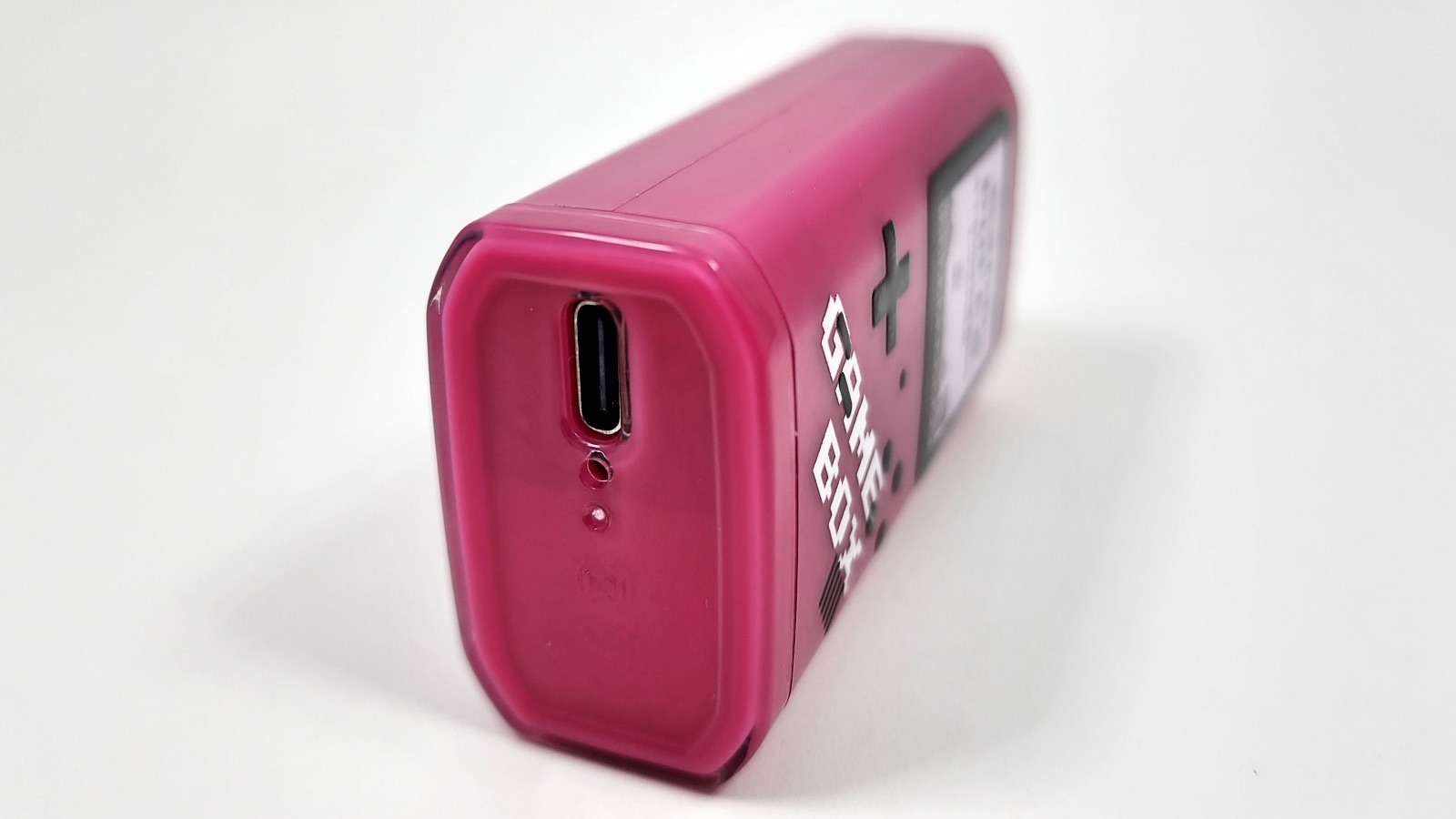 The Game Box charges using a USB-C cable, and they charge at 9 volts at a 2 amp charge. There are 12ml’s of e-liquid in these, so you’ll definitely need to recharge it a few times to get it all. The battery is an 850mAh battery, so there’s plenty of battery charge there to get you through a day of vaping. 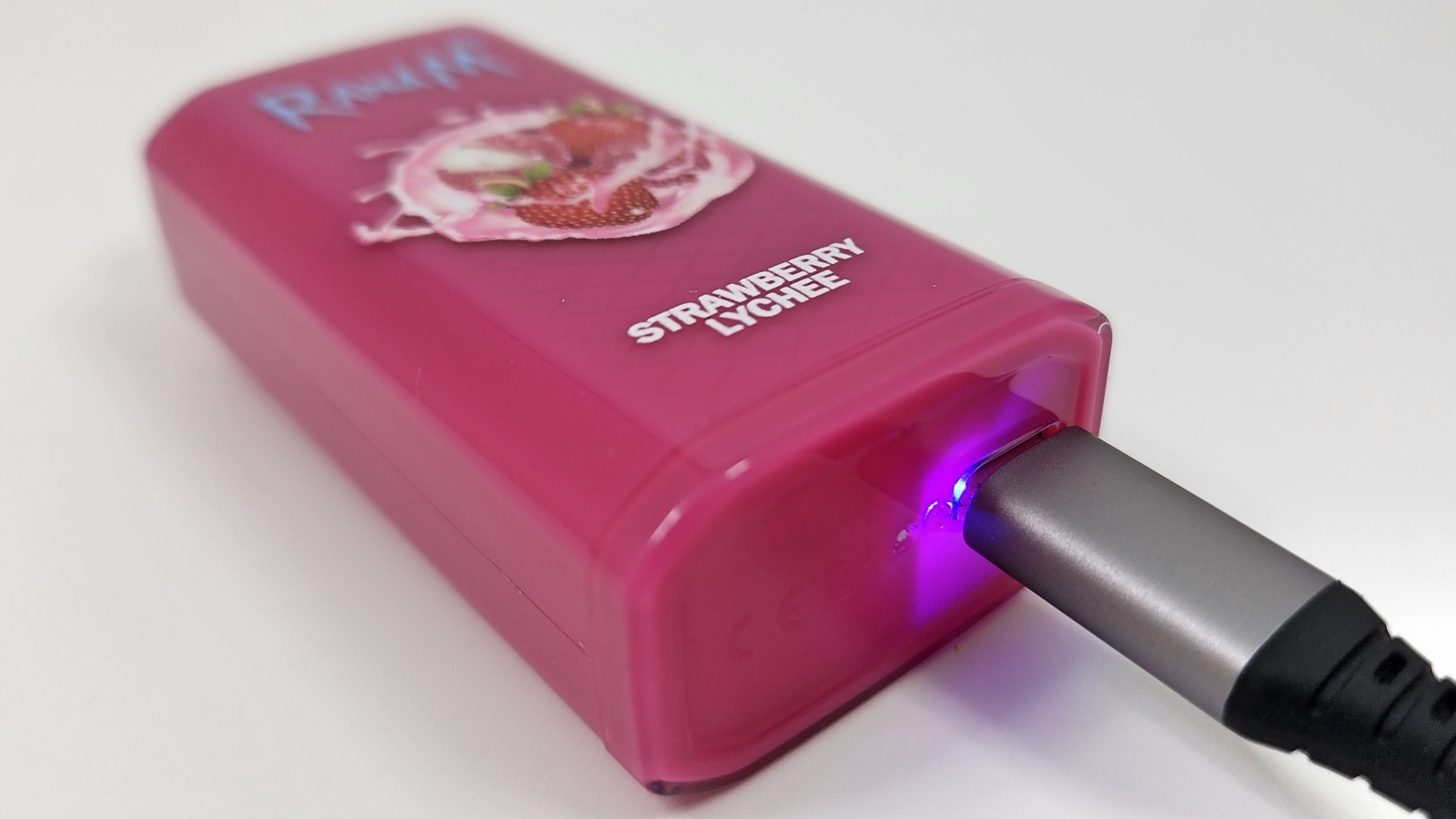 When you plug in the USB-C charger, the lights at the bottom of the device light up to let you know it’s charging. 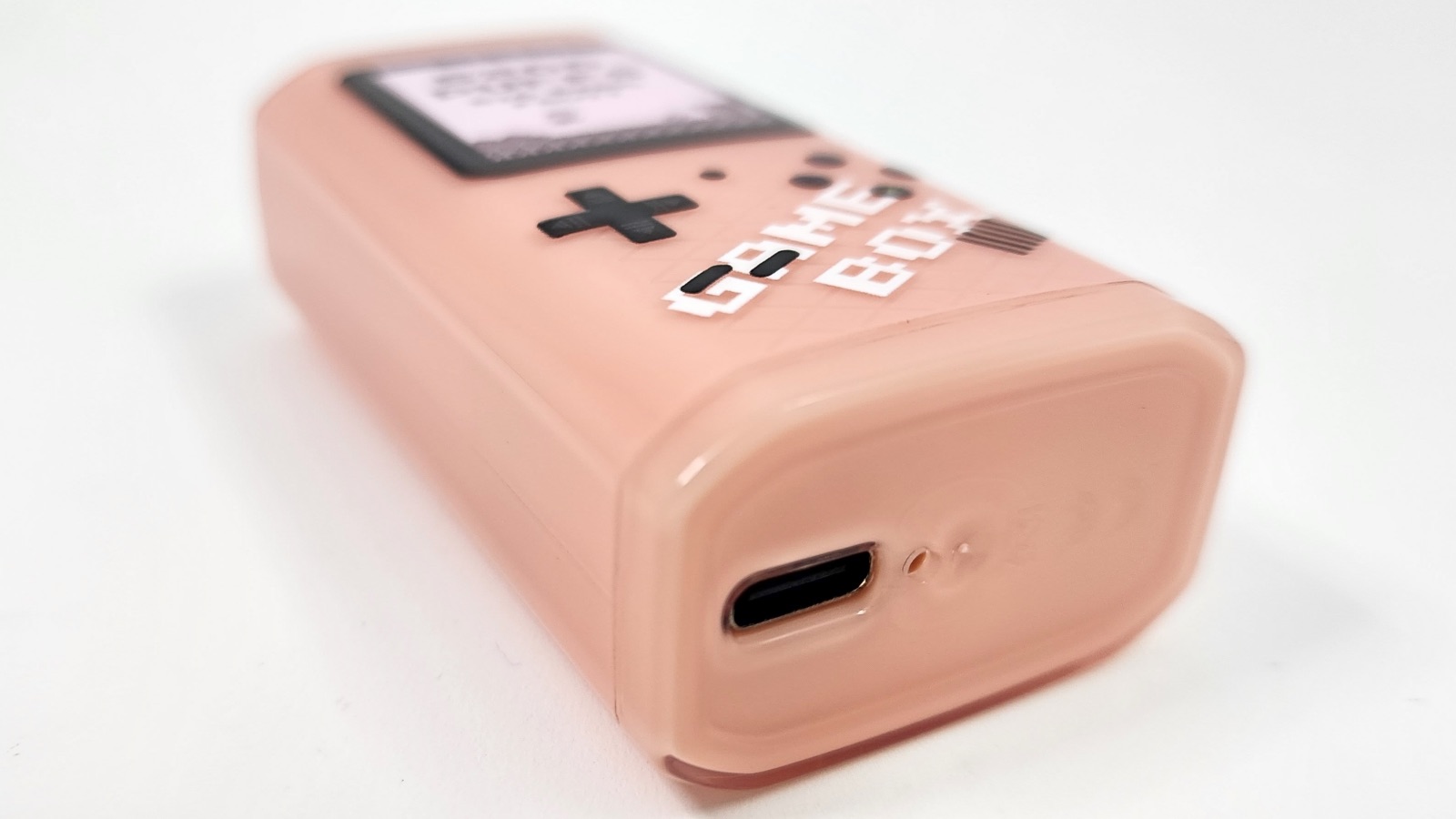 I really like the Game Box. I know there will be some concern about Fumot designing a vape device to look like a handheld video game system, and I totally get that. Personally, I think that might be problematic as well. But I’m just trying to review this for what it is. And as a gamer, I think it’s a fun design.

And this is a great device as far as performance goes. It has a nice smooth draw (although I would have liked it to be more restricted), the device is small and easy to carry around, the mouthpiece is comfortable, it has 12ml’s of e-liquid, it’s rechargeable with USB-C, and the flavors are good. It’s an overall good device.

This was sent to me for review from Fumot. They don’t have an official page for this, as far as I can tell, but here’s RandM’s site, which covers everything RandM makes.