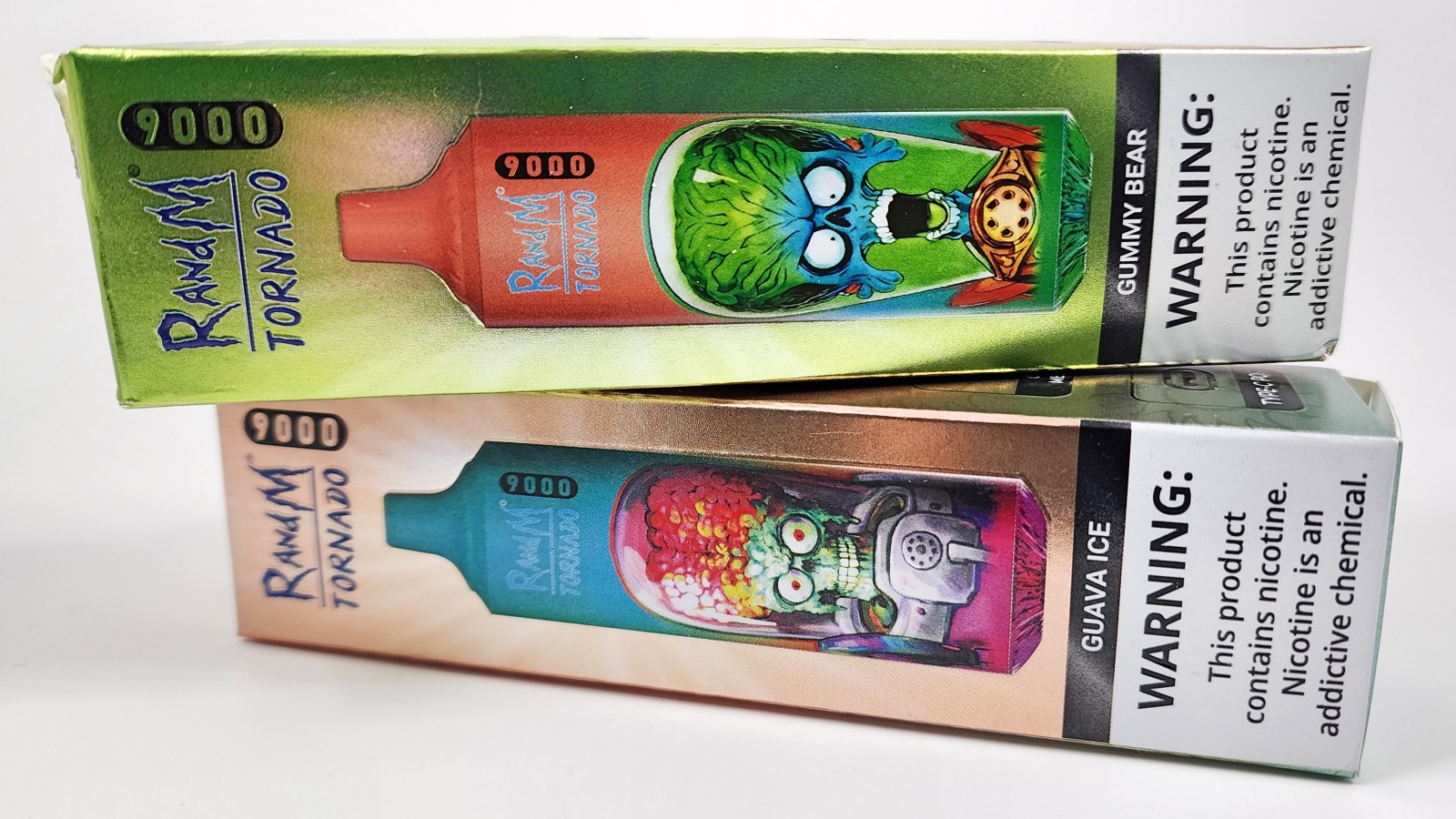 The RandM Tornado 9000 devices were sent to me for review from Fumot. These are big 9,000 puff disposable devices with some really cool alien artwork on them. 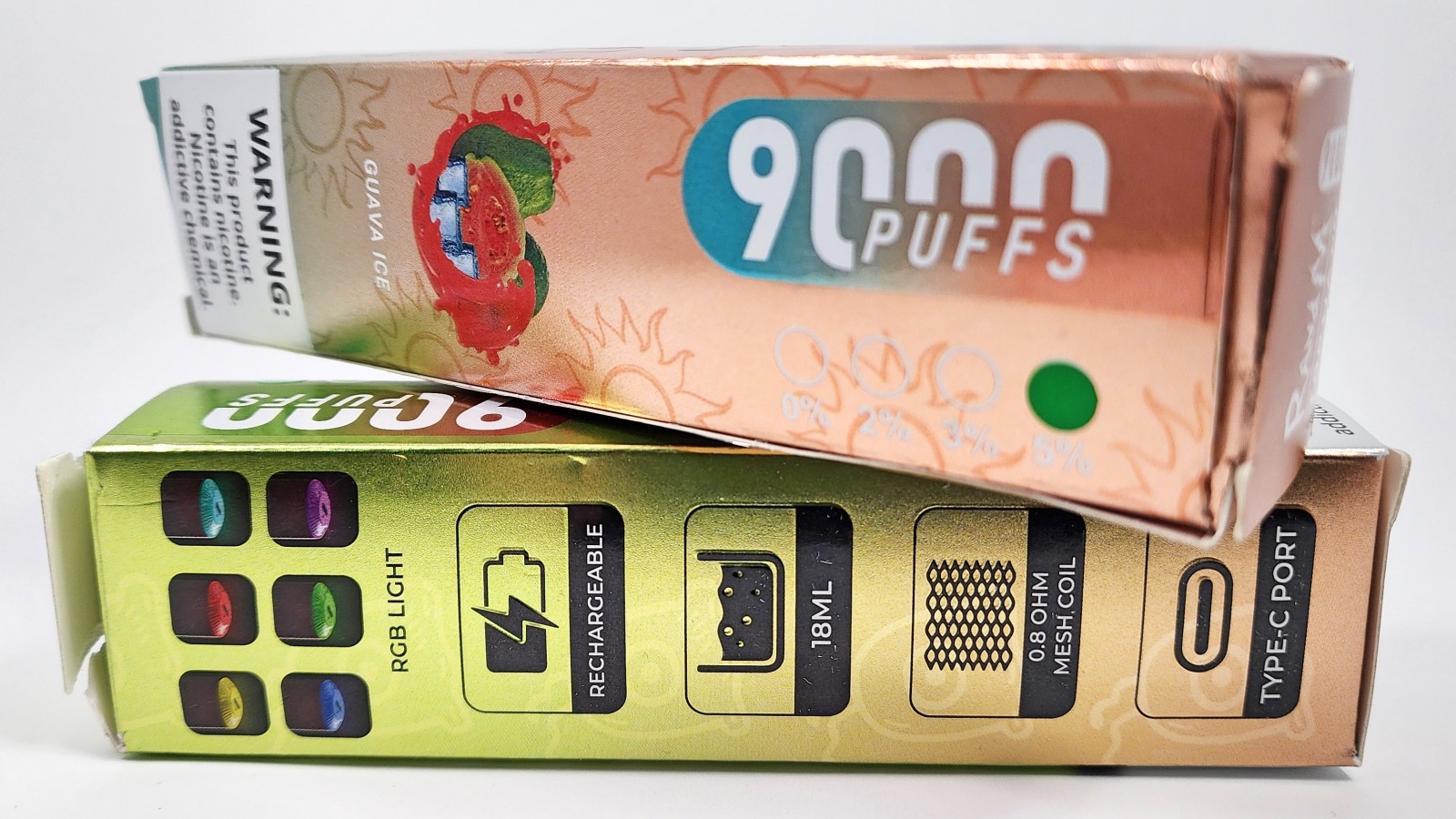 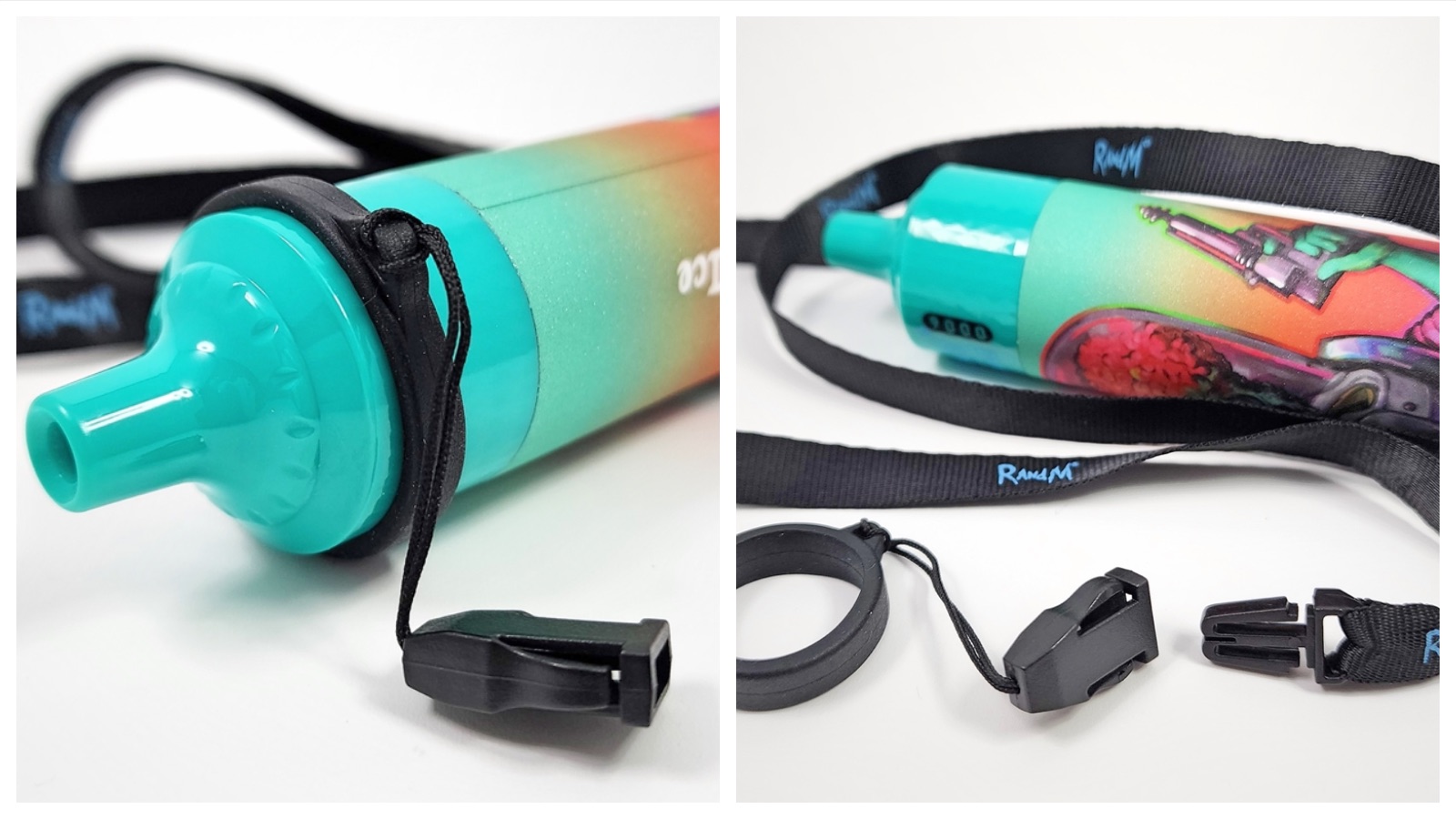 Every one of these devices come with a lanyard. I don’t use lanyards so it’s not a big deal for me but for anyone who does, I think it’s really cool that there’s one in each box. That’s a lot of lanyards to give out and something unexpected because when do you ever get anything extra with a disposable?

It’s a good lanyard too. It’s a strong material, plenty long, and it’s detachable using a little plastic clicky snapping piece. You’ll notice that the device itself doesn’t have a lanyard connection hole to connect to, which is why this lanyard has a rubber ring. It’s tight, so you really have to stretch this around the device but that keeps it really secure. And the rubber sticks well to the device too so it’s not going to slip out on you. 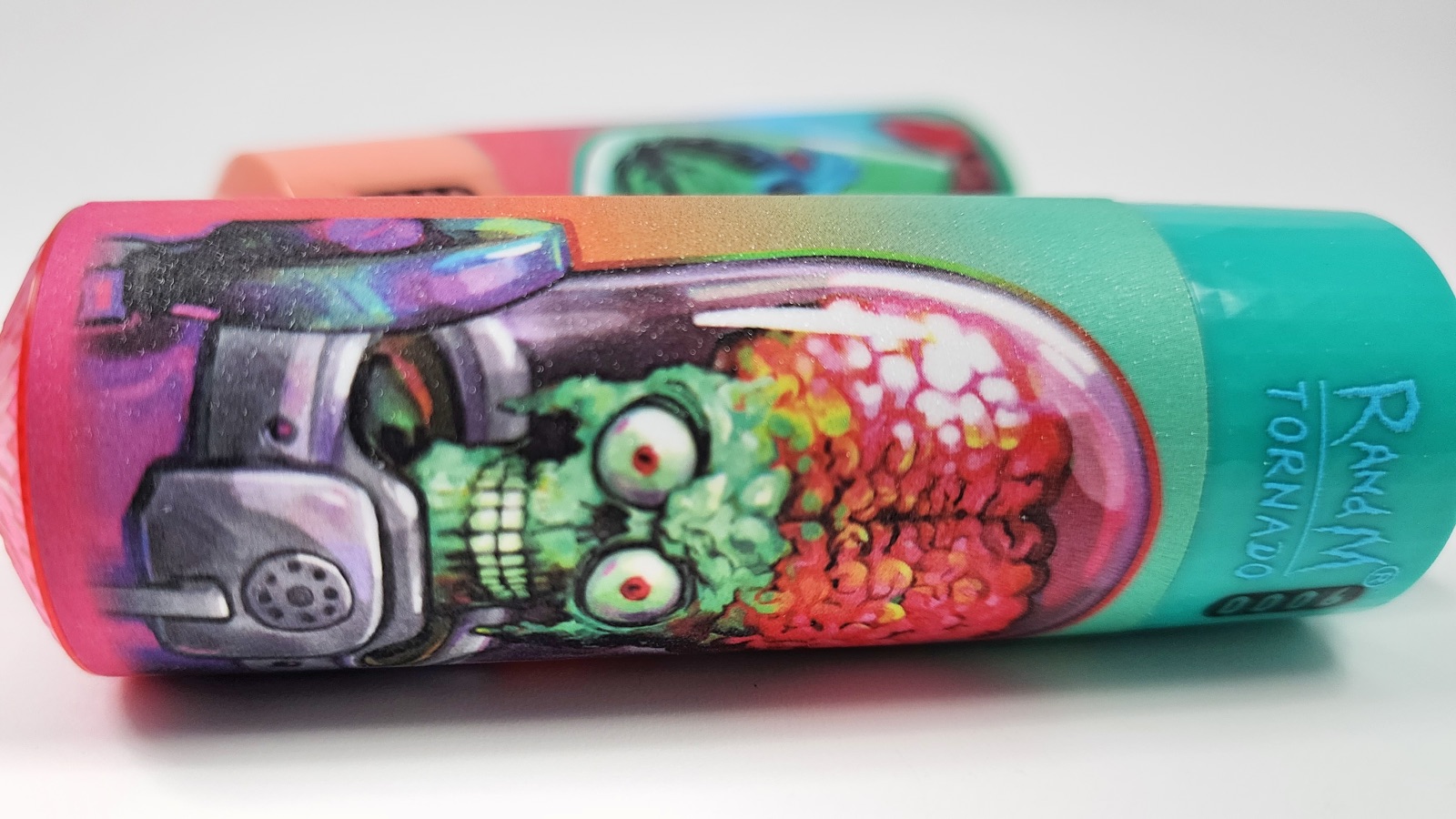 Okay, let’s talk about these designs. All of these designs feature different cartoon alien artworks. This has to be inspired by, or even direct copies of the artwork from the Mars Attacks trading cards of the 1960s. These were very popular trading cards created by Topps. I wasn’t alive in the 60s and if you weren’t either, you still might be old enough to remember the Mars Attacks! movie by Tim Burton made in 1996, so you still might recognize some of this art.

Obviously, these are scary-looking aliens who don’t come in peace. These martians came to violently conquer Earth. Seeing this artwork today, you probably don’t think much of it, but in the 1960s, this was very controversial. These cards depicted scenes of violence and torture, sexy women, and horrifying and disgusting aliens from another planet, hell-bent on killing the human race. That sort of thing just didn’t exist in those days so it was shocking. And as you’d expect, a lot of parents threw these cards away when they were found. So they’re super rare and if you find these at a yard sale or something, pick them up.

But as you can see, this is amazing artwork. It’s intricately detailed and originally hand-drawn. It’s very cool and I like that Fumot included this piece of historical art in their devices. 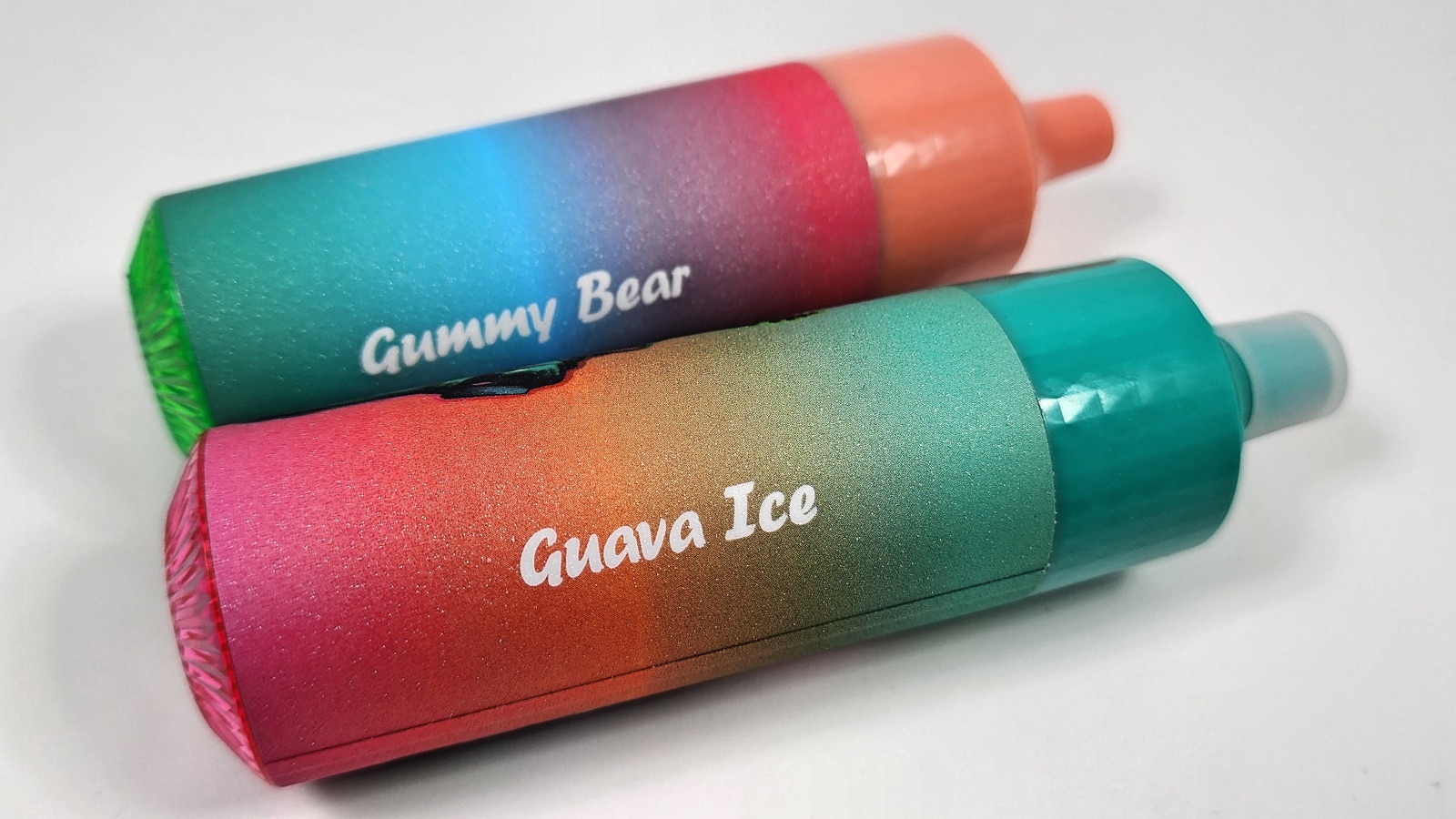 If you zoom in close to the sticker, you can see that it has a bit of texture, which gives it a sparkly design on top of matte colors. It looks great. But that texture here is also something worth calling out because it might be something you wouldn’t prefer. It’s a sort of rough, scratchy texture. For a lot of people, that probably won’t matter. But some people are very sensitive to textures so that’s something to keep in mind because you’ll feel it on your fingers and with your nails. 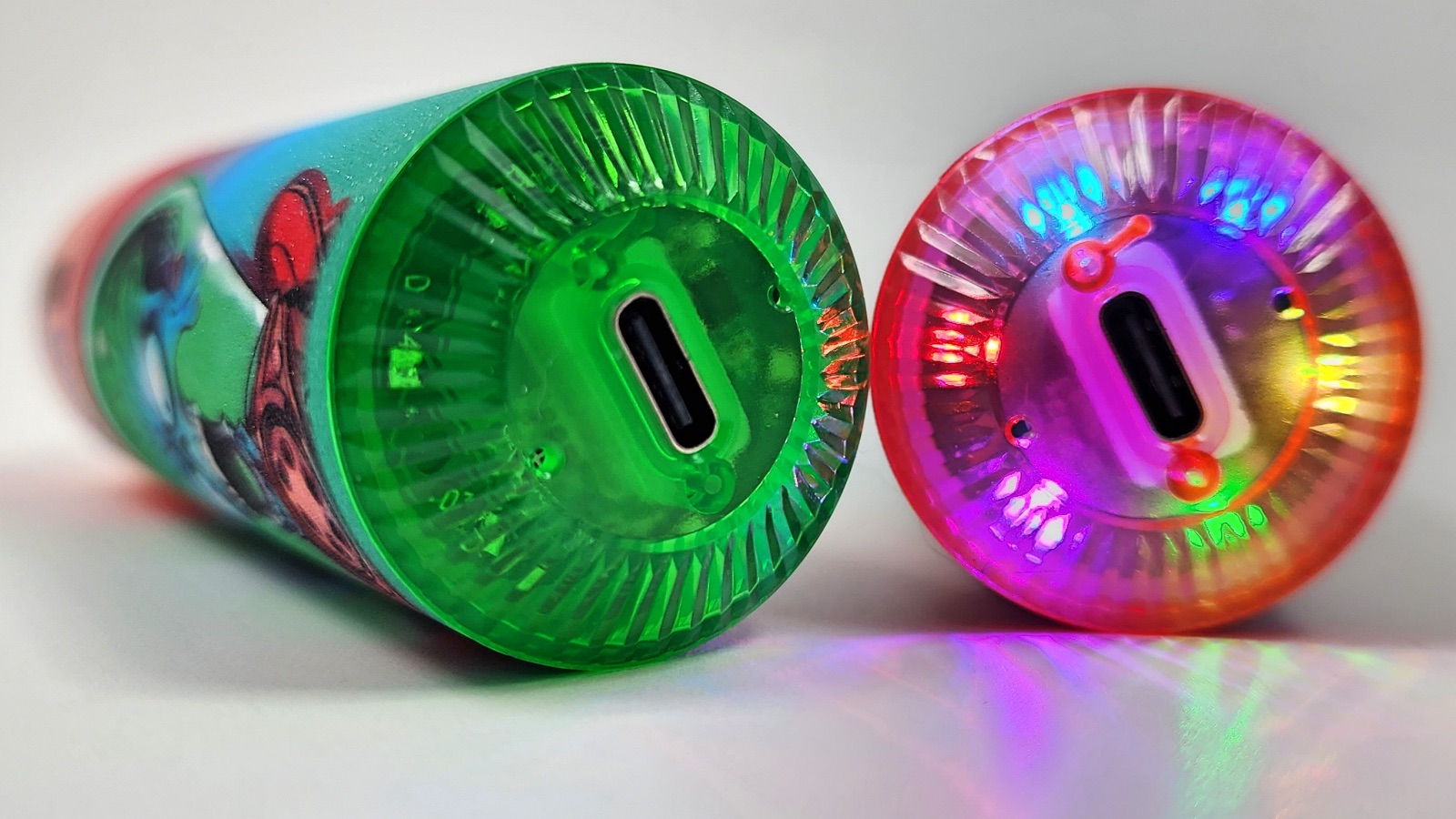 When you take a hit from these, the bottom of the device lights up. The bottom of the device has a clear plastic that encases six small RGB lights that are placed around the bottom in a circle design. While you take a hit, these lights rotate through several colors; yellow, red, light blue, blue, green, and purple. And each light hits each of these colors. So you have a lot of colors flashing through here. And these lights are bright. They’ll light up during your hit and keep going for about 7 seconds. The plastic cover over these lights has a pattern of lines too so it gives those flashing lights a circular, sort of kaleidoscope look. It’s pretty cool. 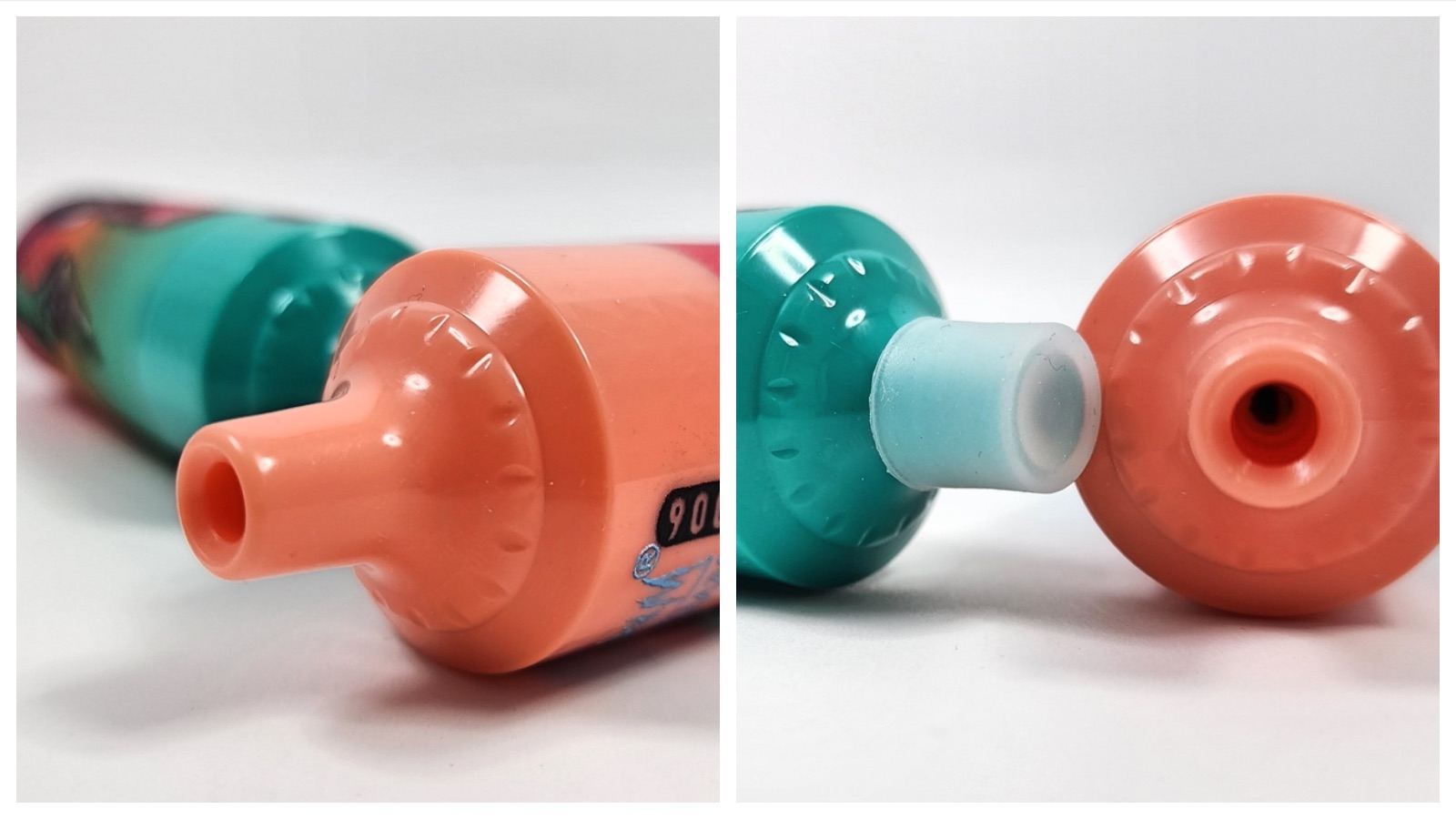 There are two little airflow intake holes at the bottom of the device. These holes are actually big enough to where you can’t get a tight draw. So this device is designed for bigger lung hits. You CAN take mouth-to-lung hits here but the draw is so airy that you can only take short, smaller hits, which isn’t the most satisfying for me.

But if you really wanted to, you can plug one of those intake holes on the bottom of the device to get a tighter draw. It’s a bit cumbersome to cover a hole and take a hit at the same time but it works. And you could put a piece of tape over one of those holes too or use the sticker that came with the device that covered up that USB-C port.

But really, this device is designed for bigger draws, so that’s probably who should be buying this. If you like tighter draws, go with one of the other devices that Fumot makes, like the Game Box or Supbliss Bingo.

These devices hold a massive 18ML of e-liquid so you’re going to get a lot of use out of these. And that’s where the name Tornado 9000 comes from because you should get about 9000 puffs from each device. 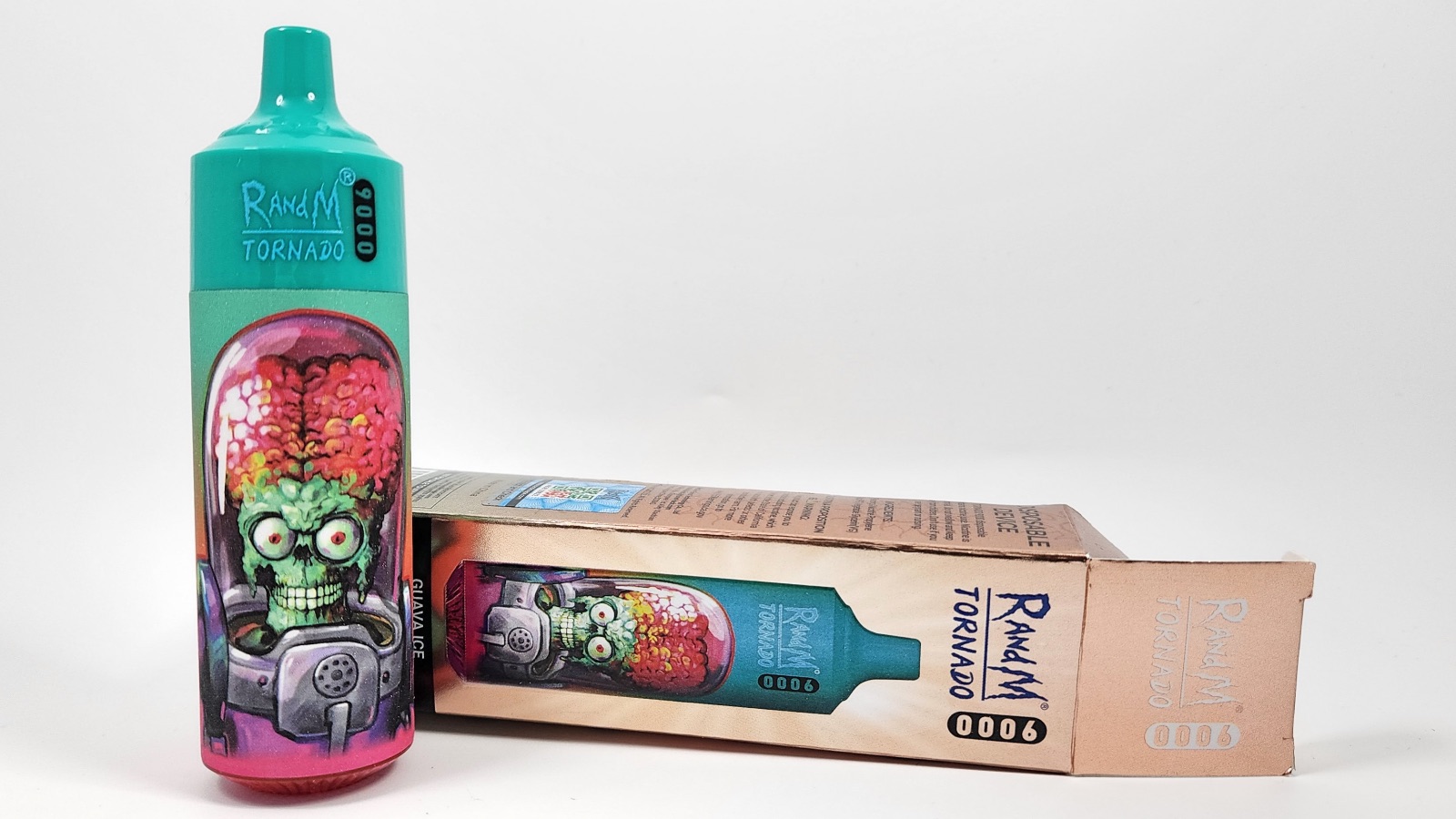 This one is strong in both guava and ice. The guava is really good and sweet. I don’t know if I would call it a real natural guava but more like a guava drink. So if you’ve ever had guava juice, that might give you an idea of what that guava is like here. It reminds me of refreshing pulpy juice. But on top of that, you have that ice flavor. Usually “ice” flavors have just a hint of ice or more of a sensation of cooling, but the ice actually seems to contribute a lot to the flavor in this one. It’s not just super-icy, but also minty. It’s a tasty combination. 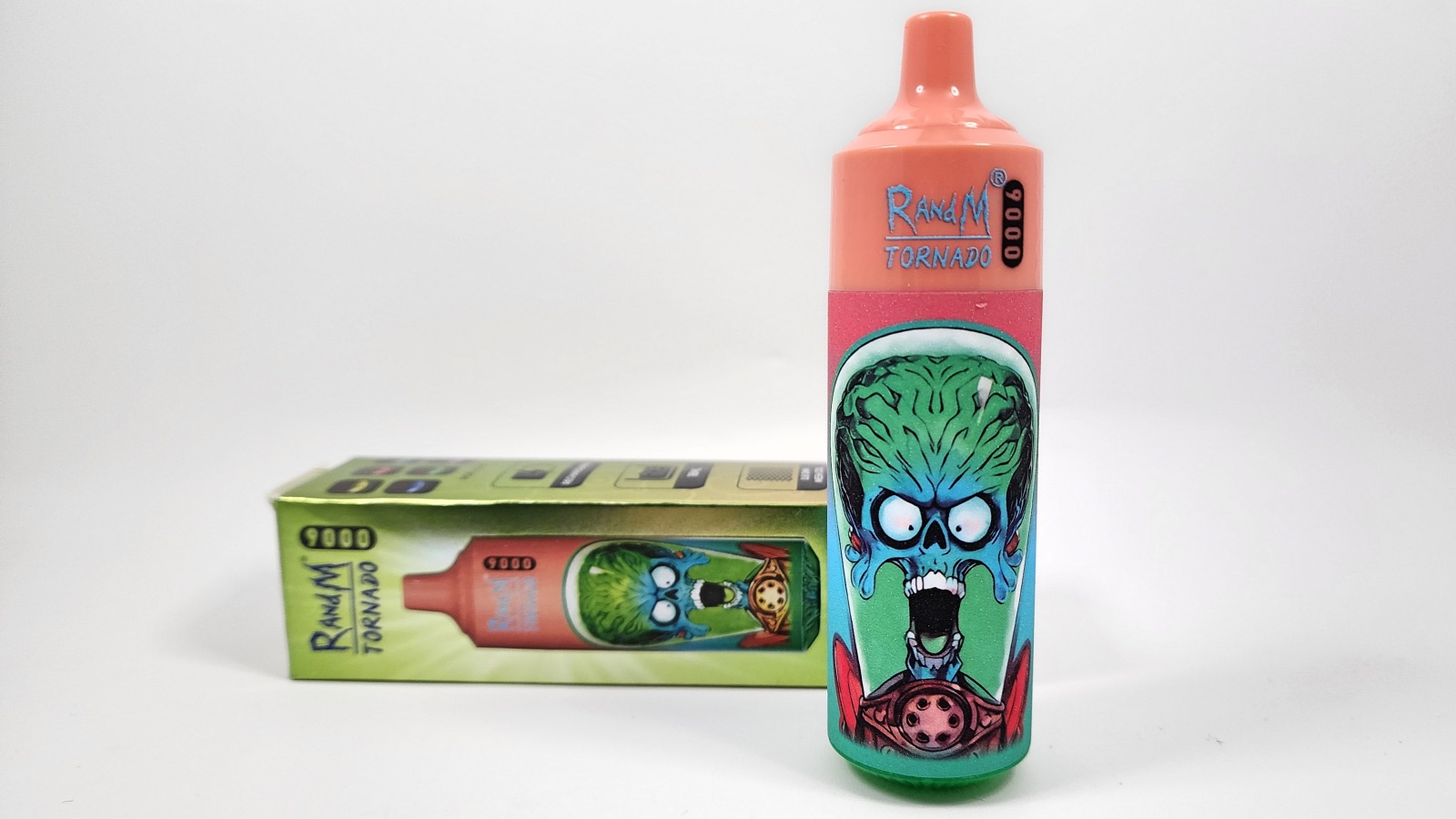 This is an awesome gummy bear flavor. A lot of vape companies have gummy bear flavors and they have a very mild taste, like a typical white gummy bear. Those are good and all, and I like them, but this one is different. This is more like a very fruity gummy bear but still with that white gummy bear taste, so it has a great realistic gummy bear flavor mixed with other fruit flavors. It’s almost like a fruit punch. And the flavor here is strong, which I like. It’s sweet too. The flavor and sweetness are perfect for me. It’s not overwhelming or like something I’d get tired of.

The flavor production is very good and that’s probably helped by the fact that these devices use a 0.8 mesh coil. Mesh coils are great for flavor and for efficient hits, so it makes sense that these taste so good.

That’s a lot of great-sounding flavors.

You can get these in 0, 2, 3, and 5% nicotine, so pretty much any of the normal strengths that you’d likely prefer. I was sent 5% nicotine, which is what I like, and it seems to be working as I would expect. I get a really good nic-hit from these. 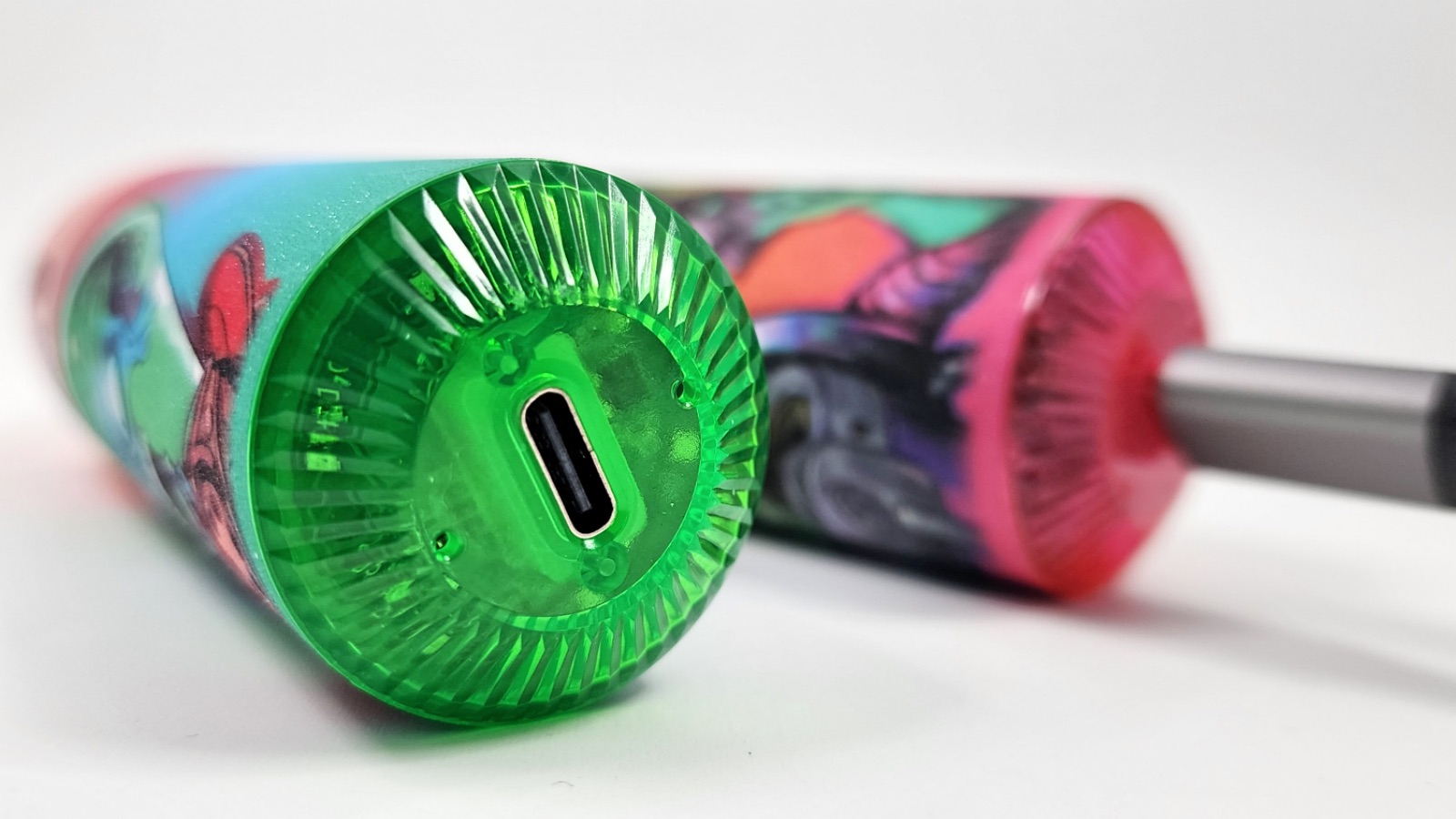 With 18ML of liquid, you obviously need to recharge these to get all of it. The Tornado 9000 has an 850mAh internal battery, which I’d say is a pretty good-sized battery. I would expect most people would get a full day of vaping before they need to recharge it.

It charges using a USB-C cable, which is not included, so you’ll need to provide your own cable here.

So that’s the RandM Tornado 9000. There’s a ton of e-liquid in these, the flavors taste good and come out strong, the artwork is awesome, and they perform well. But there are some things worth mentioning here that could be drawbacks for some people, for example, the scratchy texture, the lack of any indication that it’s charging, and this is pretty much a lung-draw-only device. The airflow style isn’t a problem, it’s just that lung draw is the style of vaping you should prefer if you decide to buy these.

So who are these for? In short, anyone who likes an airy draw and who love old-school nostalgic alien comic-style artwork.

That’s the RandM Tornado 9000. These were sent to me for the purpose of review from Fumot. The retail price for these is $26.99 each.