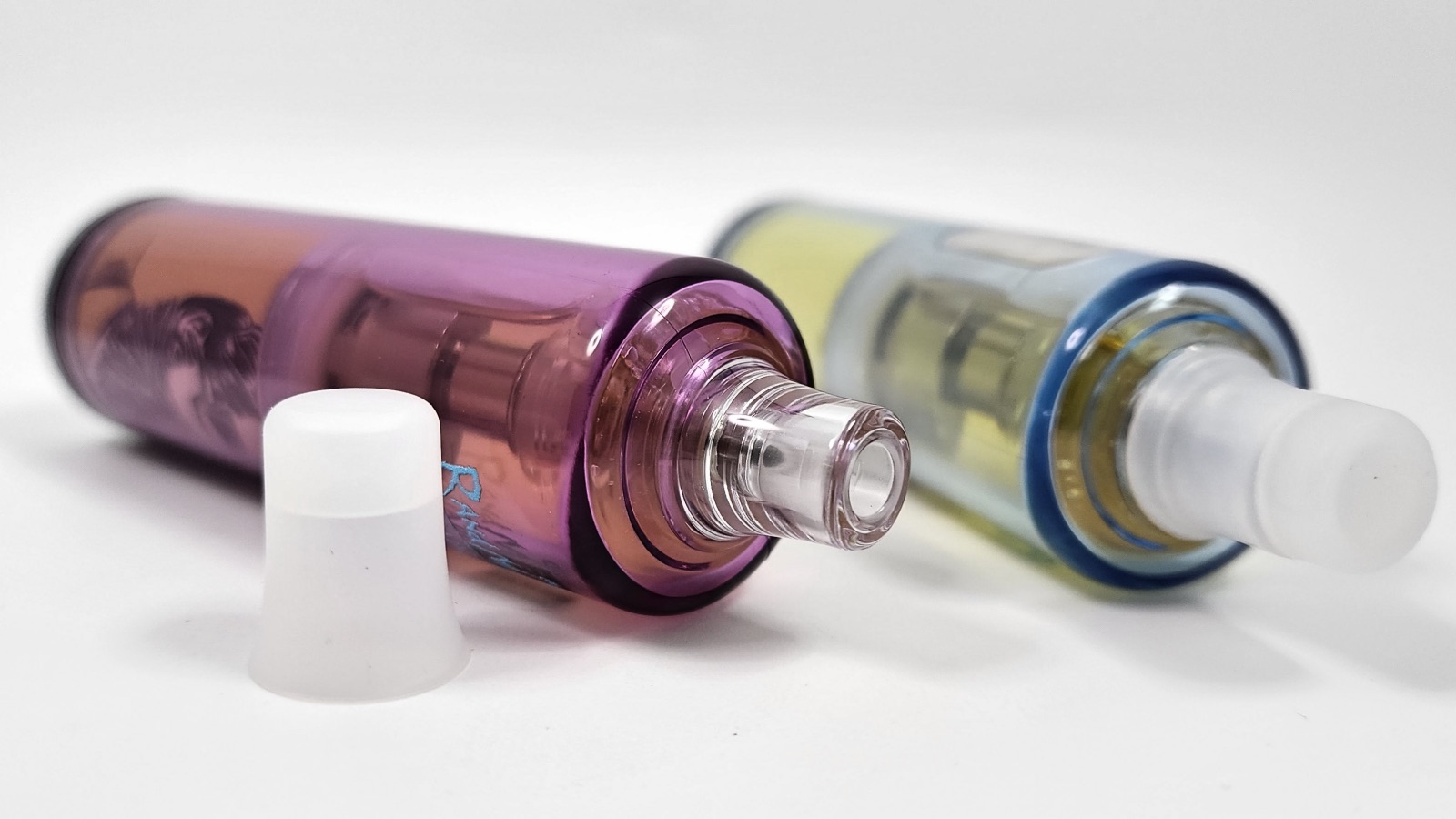 The RandM Tornado 7800 disposable vapes were sent to me for review from Fumot. These are some nice rechargeable disposables with bright, colorful lights, some nice designs, and a lot of e-liquid. 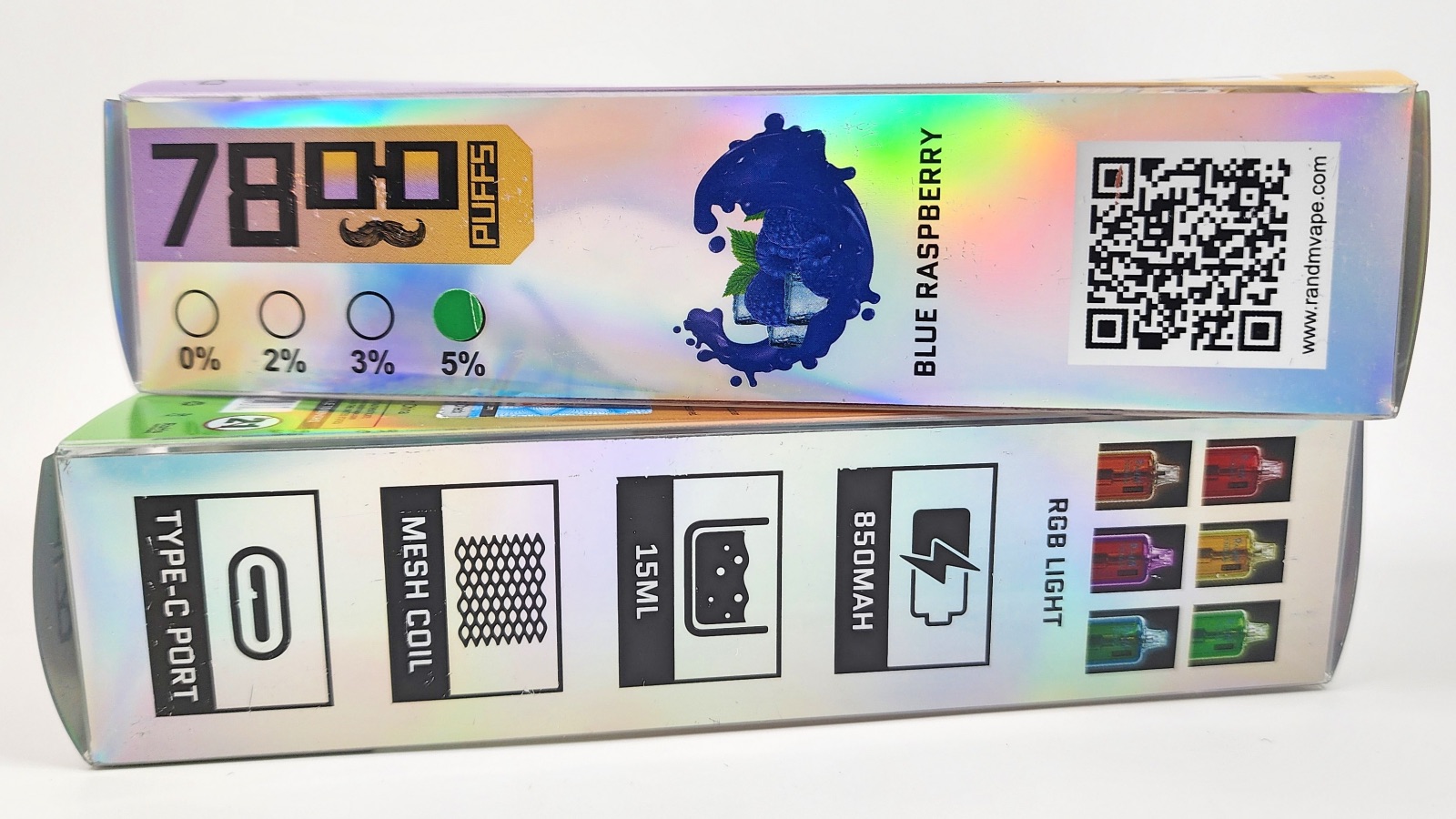 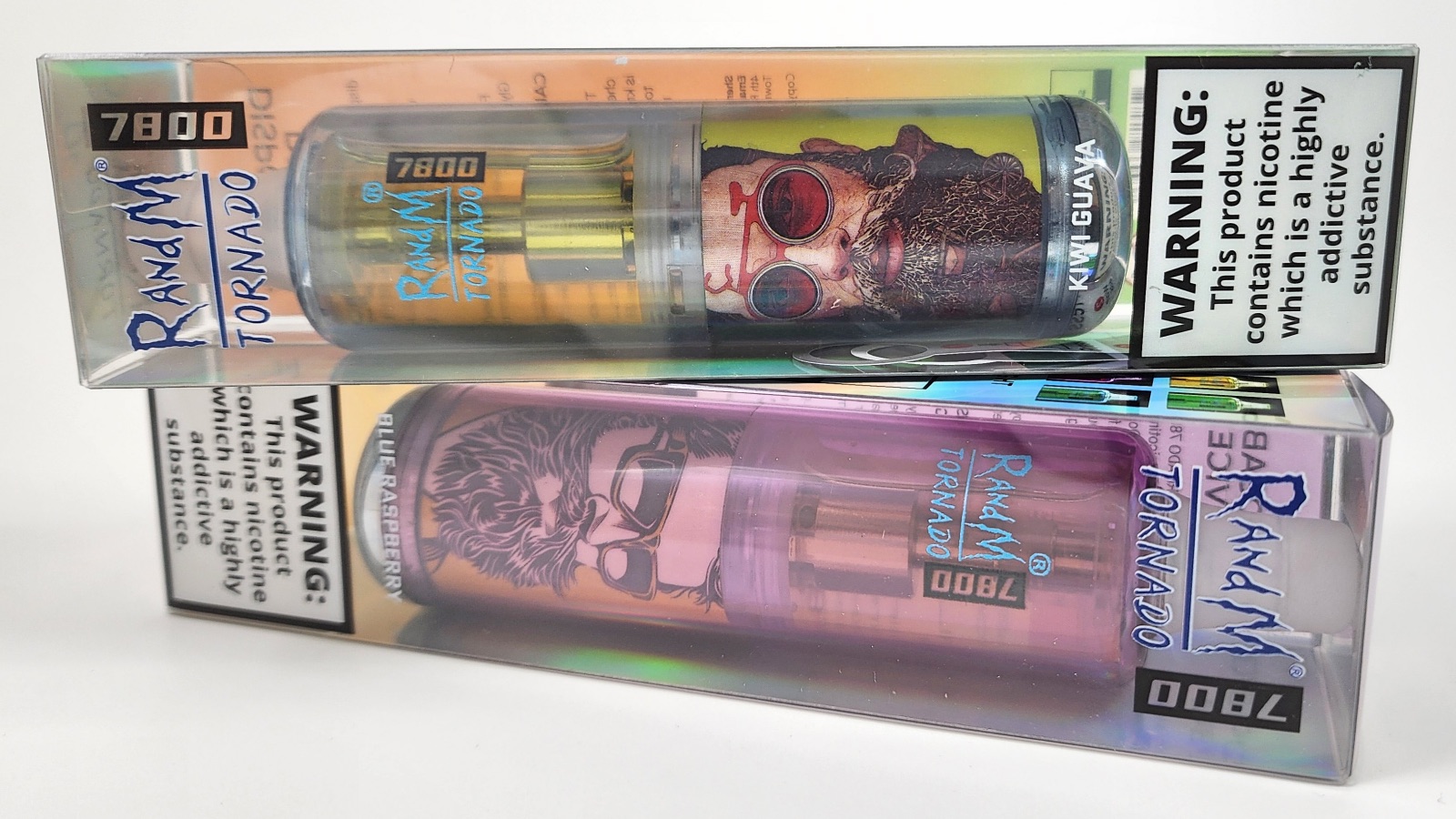 Everything from the device to the packaging is really nice. They come in these clear plastic packages. Lots of colors and shiny panels. I think it adds to the overall appeal. You know you’re getting something nice, even if it is just a disposable.

And the devices come wrapped so that you know they haven’t been tampered with. 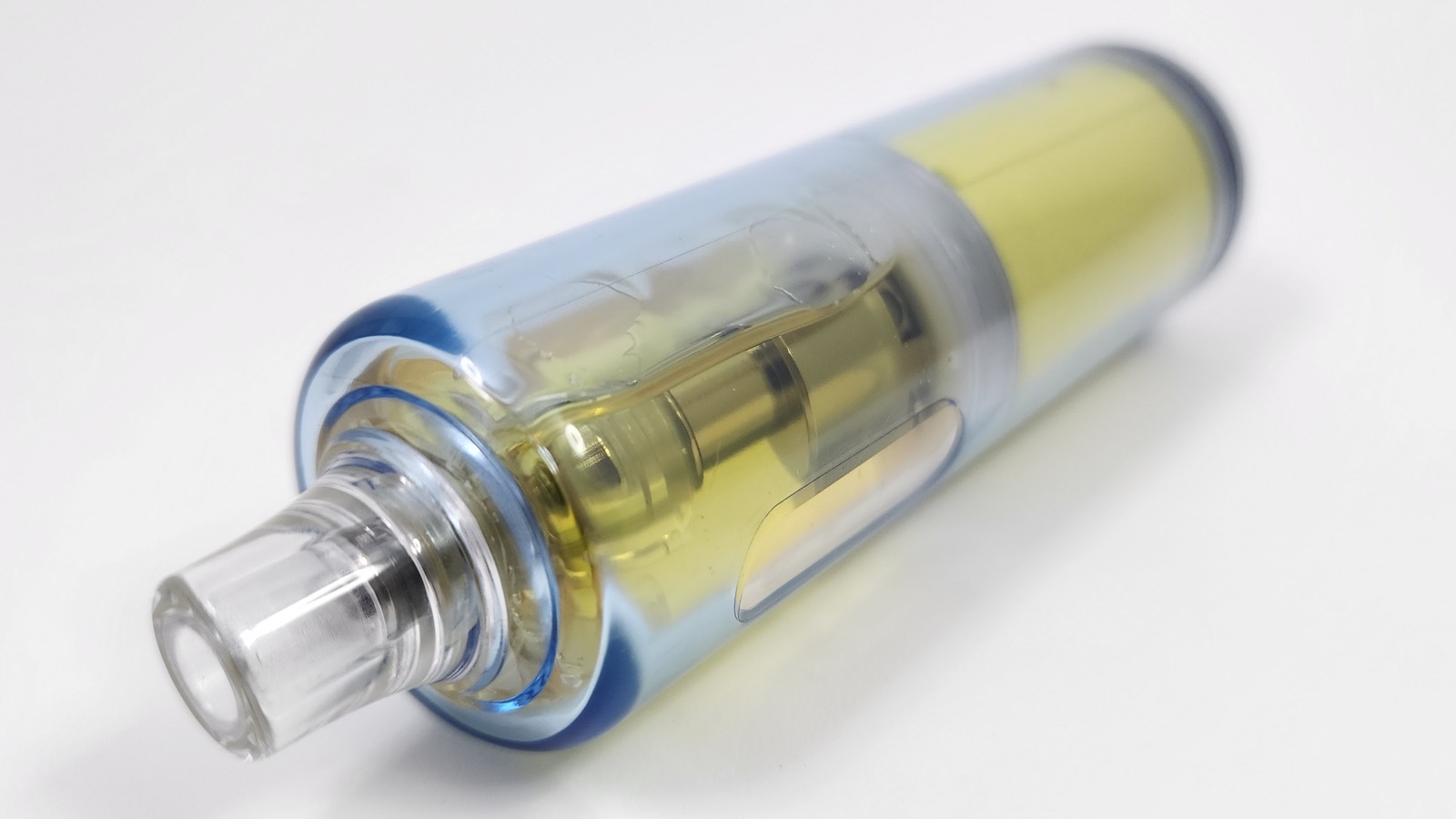 The device itself just has a great overall look to it. The top of the device has a clear slim mouthpiece that gets wider at the base. It’s really comfortable to hit from.

Then you have the body of the device, which is made of thick clear plastic. The plastic is tinted in different colors, depending on the flavor you get, but the two I have are tinted light yellow and light pink.

The tank section is see-through, and inside, you can see a chamber that holds the mesh coil. This is nice because you can see how much liquid you have in the device. The tank wicks really well too. You can chain vape this thing and never get a dry hit. It’s built really well. 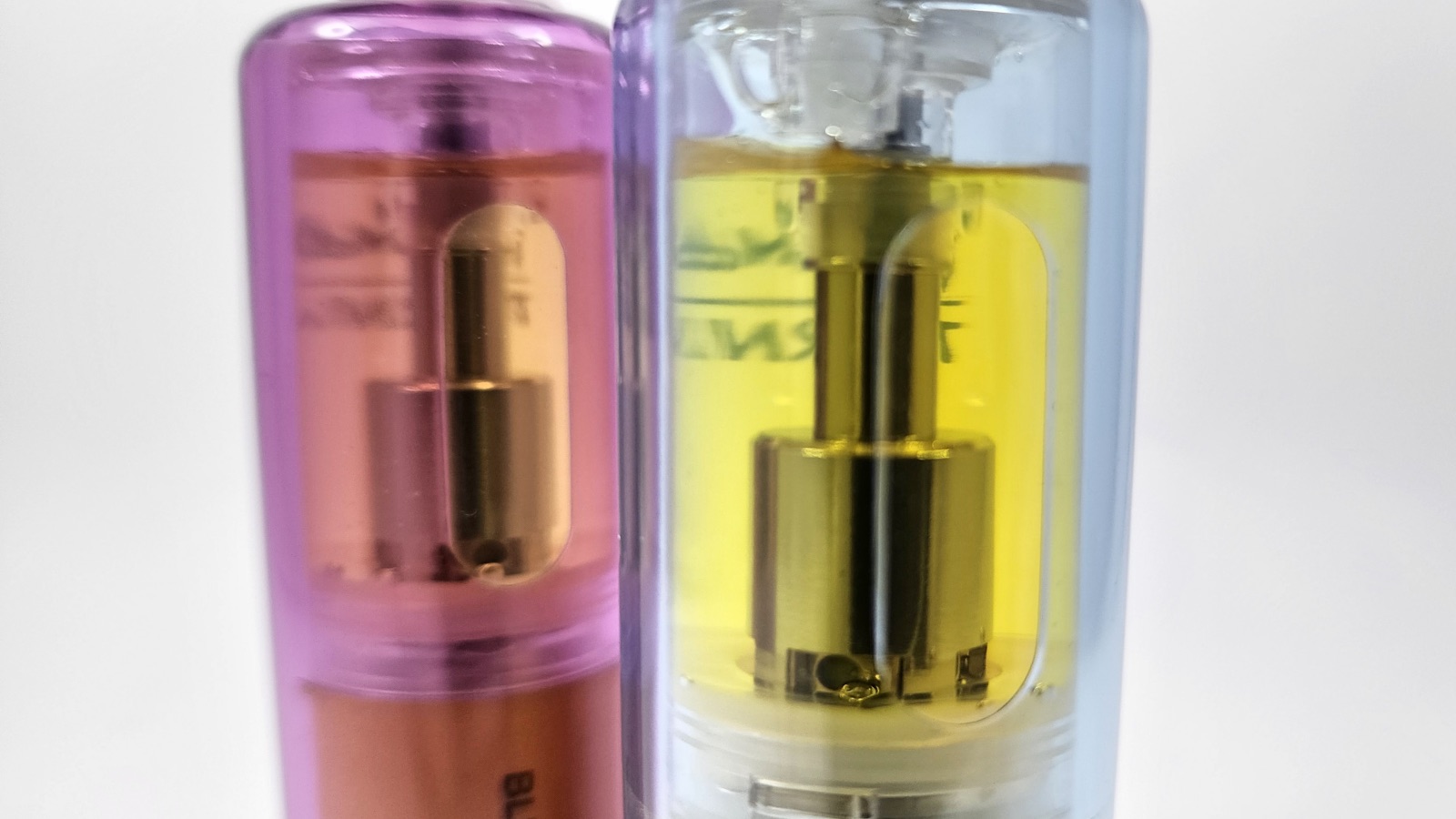 The see-through tank is also cool because you can see that this works just like a non-disposable sub-ohm tank. There have been videos on TikTok showing disposable device teardowns that imply that people are vaping gross filters and computer chips.

Obviously, those people have no idea what they’re looking at when taking their devices apart. But here, we can see exactly what’s going on. There’s nothing hidden here about how the device is built. You have a coil that draws in liquid from the bottom of the tank, it fires when you hit the switch, and the vapor goes up the chimney.

The Bottom of the Device 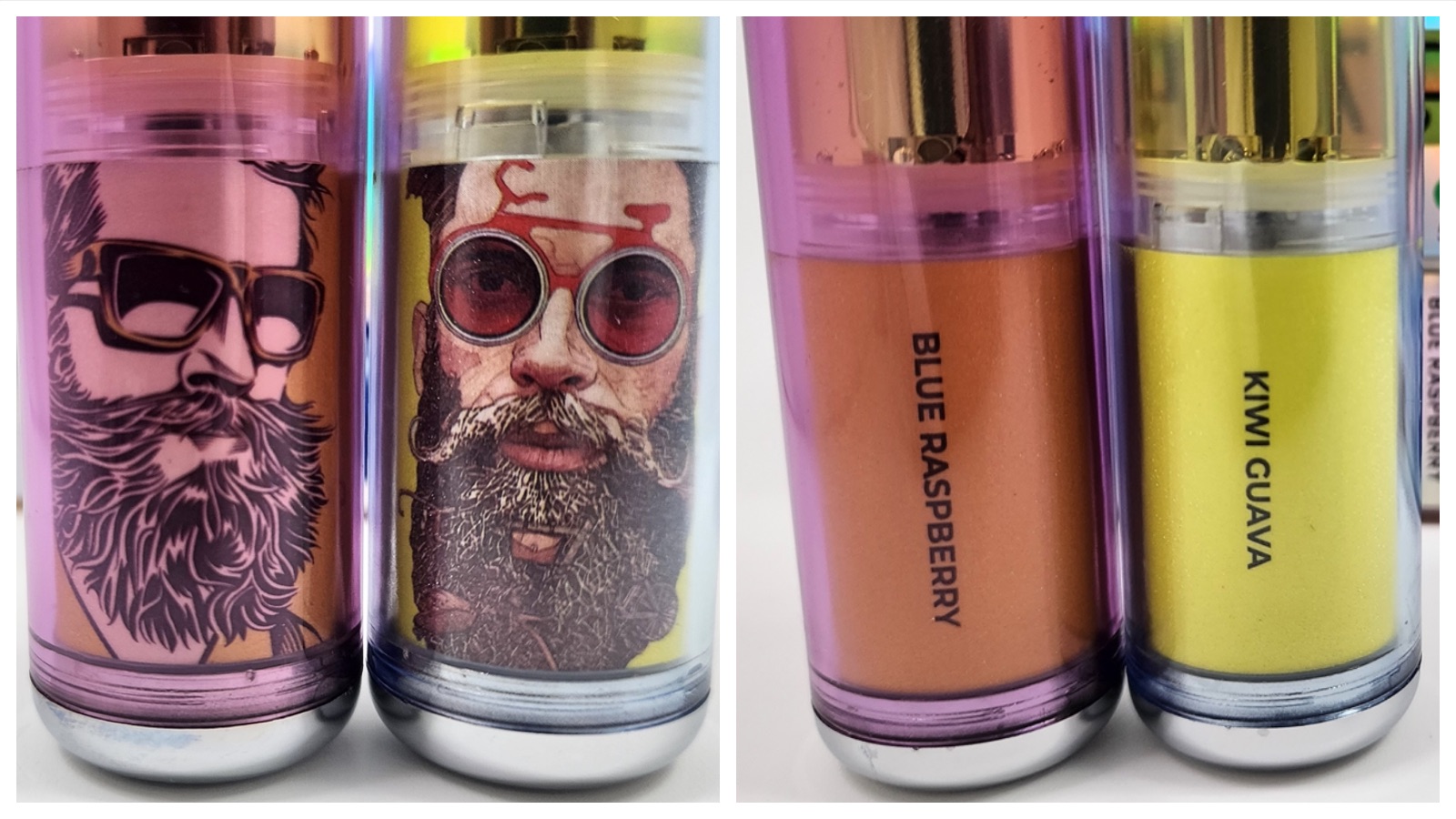 The bottom half of the device houses the electronics, so you’ve got your chip and battery in there. It’s all covered up by a sticker underneath the casing. These stickers all seem to have hipster guys with sunglasses. I wish I knew more about this artwork and the meaning of it, or who these guys are, because then I might be more interested in it, but since I don’t know anything about it, I would rather not have the faces of random guys on my vape device.

The bearded guy on the Blue Raspberry device is pretty boring to me, but I will say that the guy on the Kiwi Guava device is a bit more unique and interesting. This guy has sunglasses in the shape of a bicycle frame, and he’s got bike parts sticking out of his beard. I used to be an avid cyclist, so I think that’s a fun one.

On the other side of the sticker, you can find the flavor.

And then the bottom of the device has a shiny silver-colored plastic. It all looks really nice. The bottom is also where you’ll find the airflow intake and the USB-C charging port. 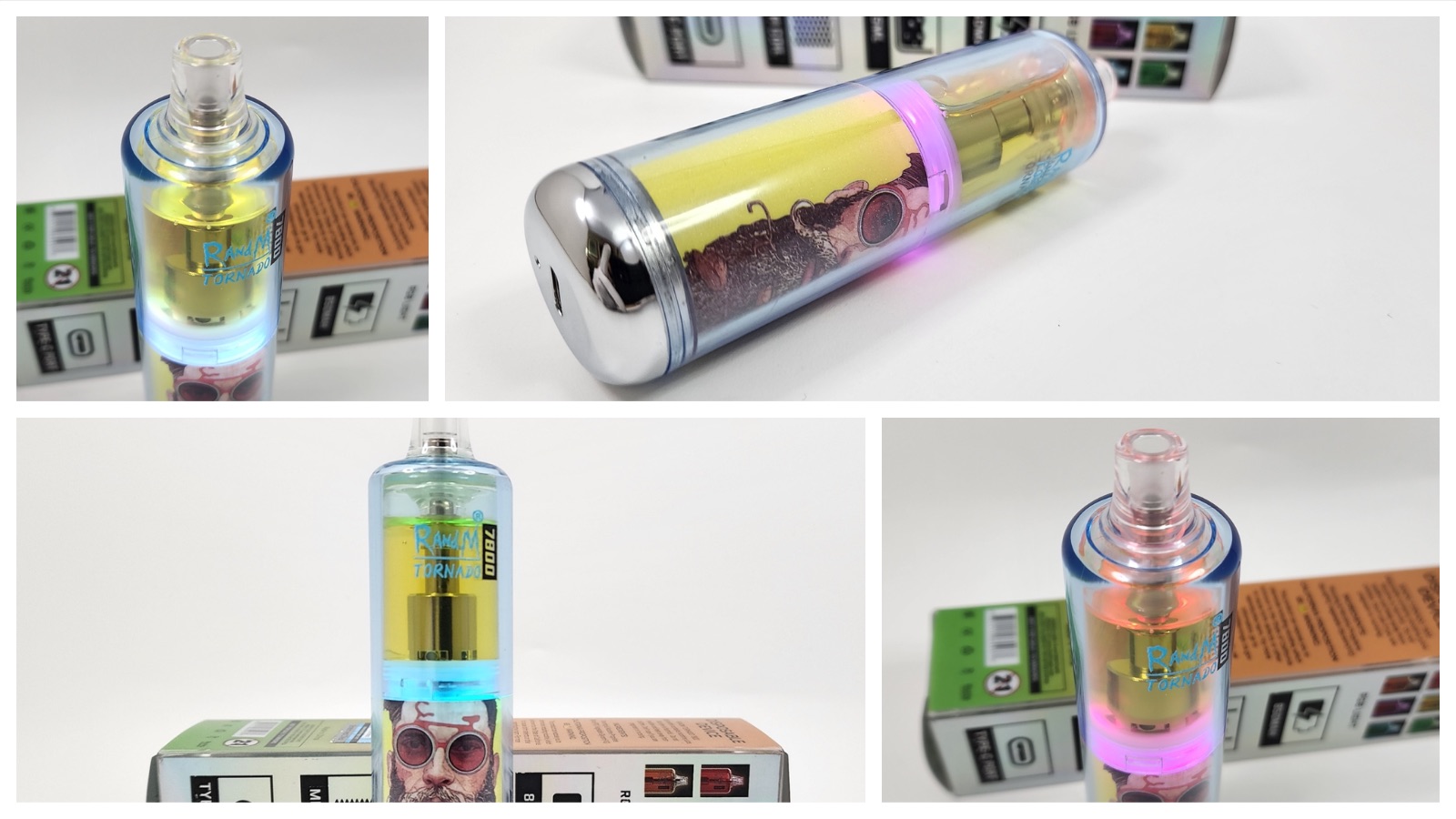 When you hit the device, the colors light up. You have two sets of lights built-in. There are lights right in the middle of the device where the tank meets the battery and another set of lights at the bottom of the device. Since this device is all clear plastic, the lights resonate all throughout the device, but it’s especially noticeable in the middle, bottom, and top.

The bottom light shines through where the sticker ends, which shines a small thin ring around the base. It’s nice.

But I think it’s REALLY cool how the middle light reflects off the liquid at the top of the device. It’s weird because the light from the LED shines one color, but some colors come out as a different color as it passes through the liquid. And then it bounces off of the plastic at the top.

The lights cycle through a variety of colors. You have red, yellow, green, orange, purple, and blue. It slowly moves through the colors as you’re vaping and then continues for about 7 seconds. Then it flashes quickly through all of the colors really quickly before shutting off.

The Tornado 7800’s have a loose aery draw which I was expecting because I had just tested the Tornado 9000s, which also has a very loose draw. But unlike the 9000s, these have only a single airflow intake hole at the bottom of the device. On the 9000’s you could sort of hack the airflow by putting a sticker or your finger over one of the holes to get a tighter draw. But since this has only one airflow intake hole, you can’t cover it; otherwise, you wouldn’t be able to take a hit.

The airflow really straddles that line of loose MTL hit and a lung draw, and that’s not really how I prefer to vape. For me, the draw is too tight to get a comfortable lung hit and too loose to get a satisfying mouth-to-lung hit. But MTL is my preferred way to hit this. It feels the most comfortable. That just means I can only take smaller, shorter draws on these. So I hope that gives you some idea of how this hits. If you like loose draws, this is for you.

These devices have 15mls of liquid. These also come in nicotine strengths of 0, 2, 3, and 5% nicotine. They sent me the 5% versions, which is the strength I prefer, and the nicotine hits how I like it, so it seems like good nicotine to me.

Fumot sent me two flavors to try; Blue Raspberry and Kiwi Guava. But they have 12 flavors in all in this line. They also have:

So let’s go over the two they sent me. 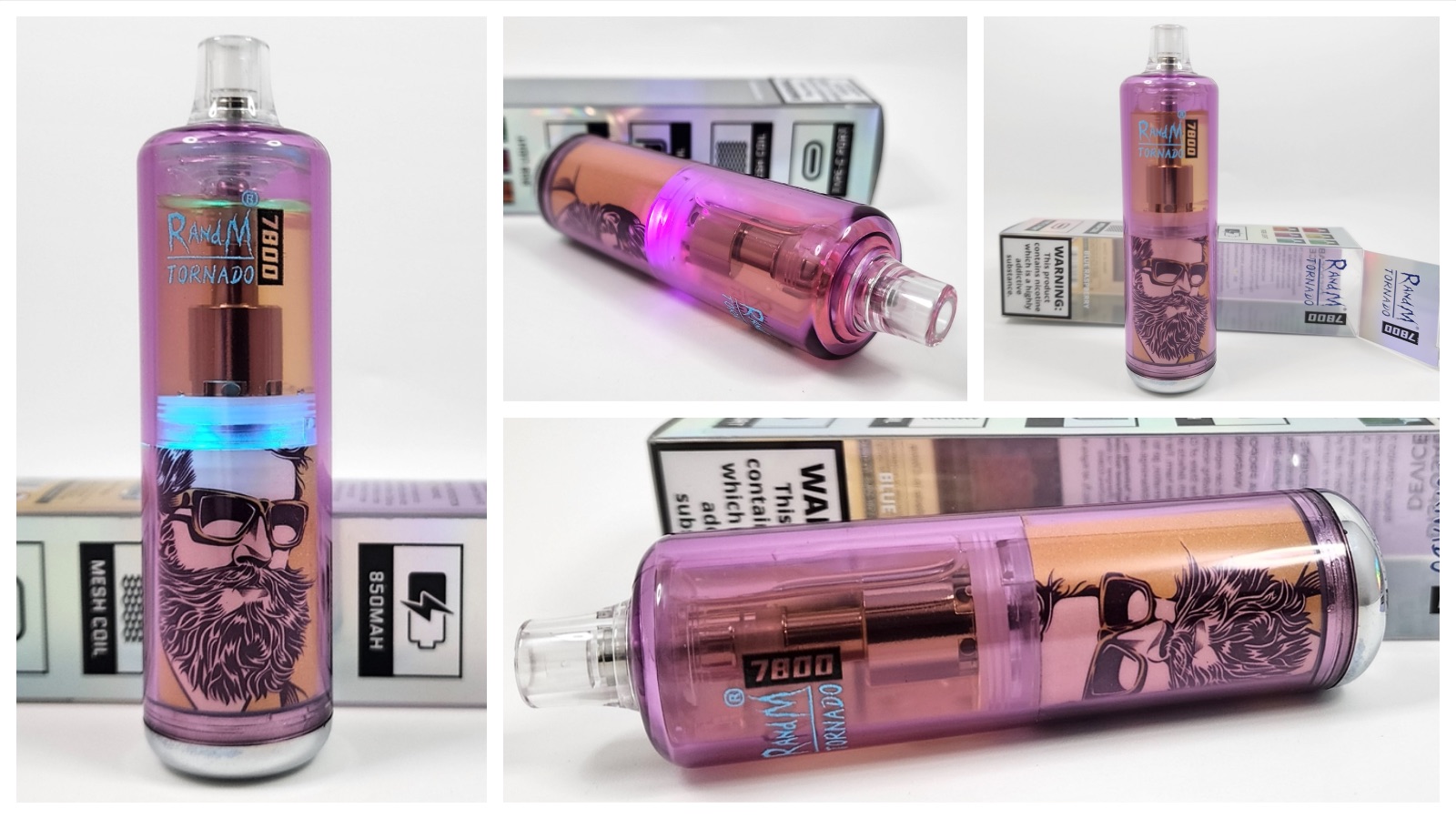 Blue raspberry flavors almost always seem to be mostly the same, and this one is a lot like the others, but that’s not bad. It’s a very good flavor. And something that makes this one stand out from others is that the flavor is much stronger than usual. This blue raspberry flavor just comes through really clearly. There’s no mistaking what this flavor is supposed to be. It’s a nice, sweet, strong blue raspberry. 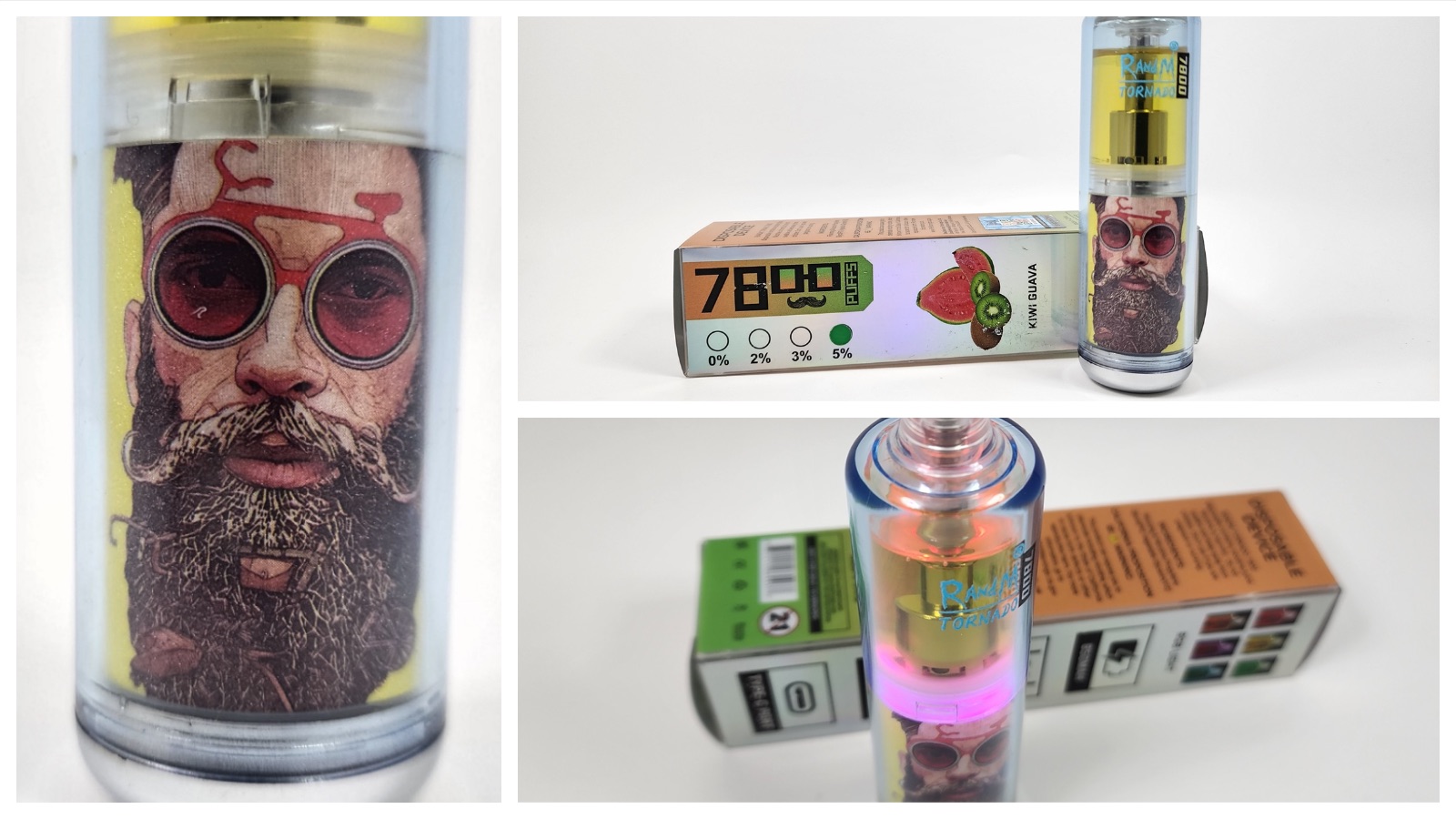 This is a great mix of flavors. Kiwi and guava just seem like flavors that should be mixed together. The kiwi is light, as I would expect, but what’s interesting to me is that I taste the kiwi first. But then that guava comes in really quickly after the kiwi, and then it takes over. The guava is a far more powerful flavor. There’s some ice going on here too. If you’re looking for a nice guava flavor, this is a good one. 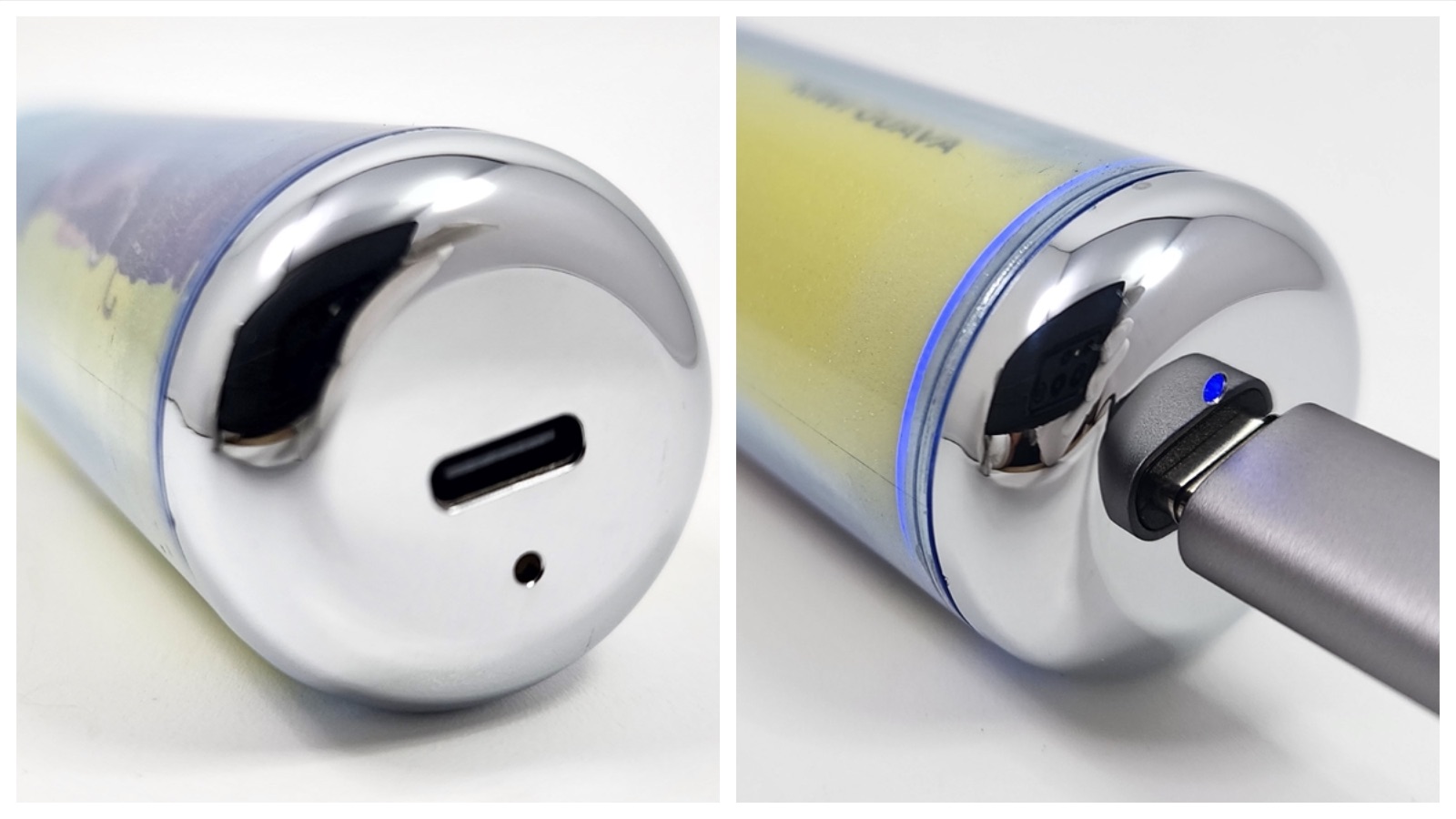 The internal battery in the Tornado 7800 is a big 850mAh battery. I think that’s a really good-sized battery for a disposable, so it should last you a full day of vaping. And when you need to charge it, it uses a USB-C cable. A charging cable isn’t included, but most people should have one these days. While the device is plugged in, the bottom LED ring lights up blue so you know it’s charging. Then it flashes when you unplug it.

I think these are some really nice disposables. They look great, I love being able to see the liquid in the tank, I like the way the lights shine through the liquid, the casing feels really durable, they charge with USB-C, they have a ton of e-liquid, and the flavors taste great and come through strong. I’m not a huge fan of the artwork but I don’t hate it. And the loose draw style isn’t my preference, but that just means these are for people who like really airy hits. But overall, these are nice devices.

The RandM Tornado 7800s were sent to me for the purpose of this review.