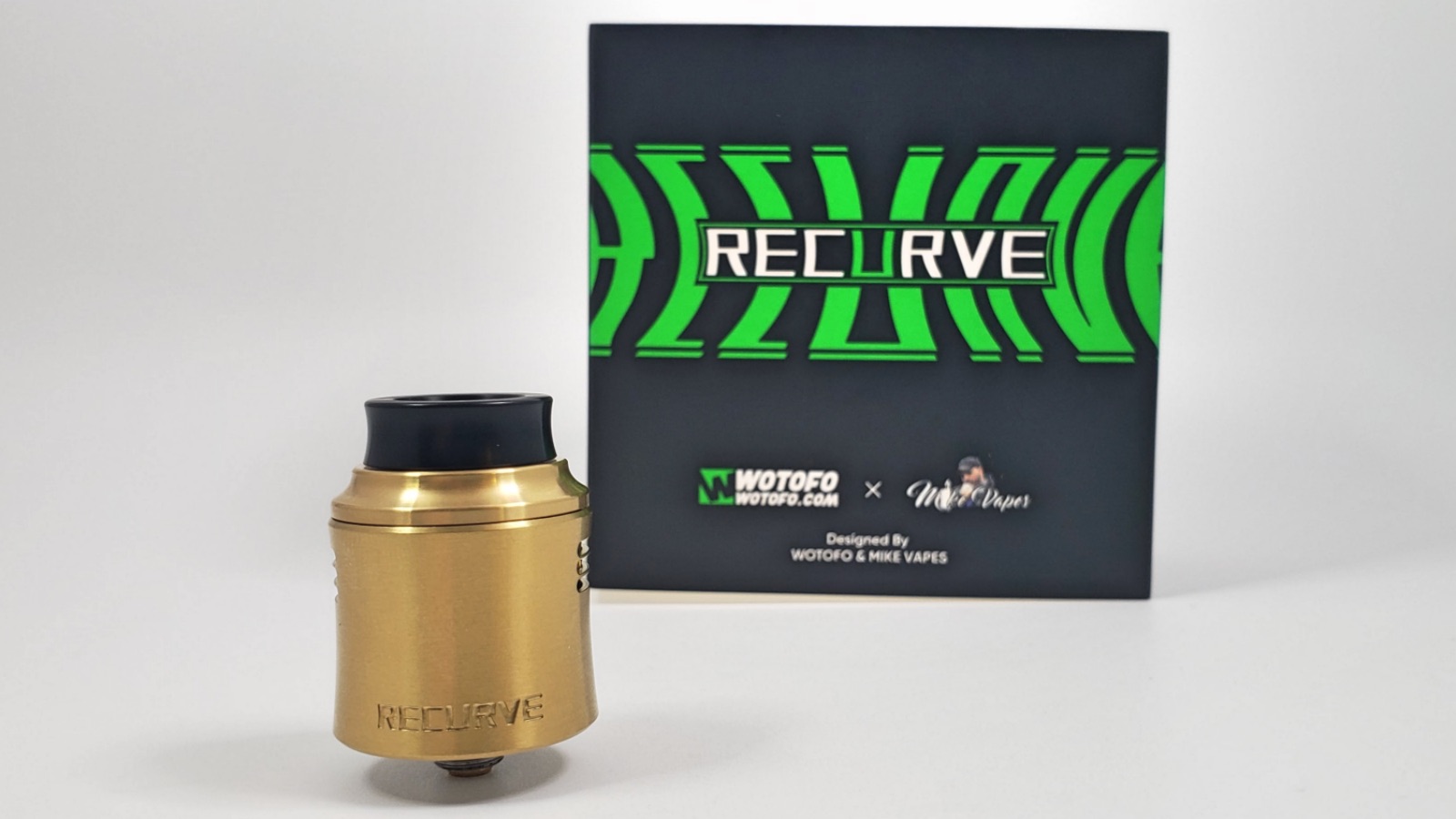 The Recurve V2 RDA was sent to me for review from Wotofo (check it out here). This is a dual-coil RDA made in collaboration with Mike Vapes. Although this is called the V2, this is actually the third iteration in this line because the original Recurve was a single-coil RDA released in mid-2018. Then Wotofo released the dual coil Recurve (check my review of that too) a year later, in mid-2019. And now this model is the updated version of the dual coil Recurve. So yeah, it does make sense to call it the V2; I just wanted to provide a little history. 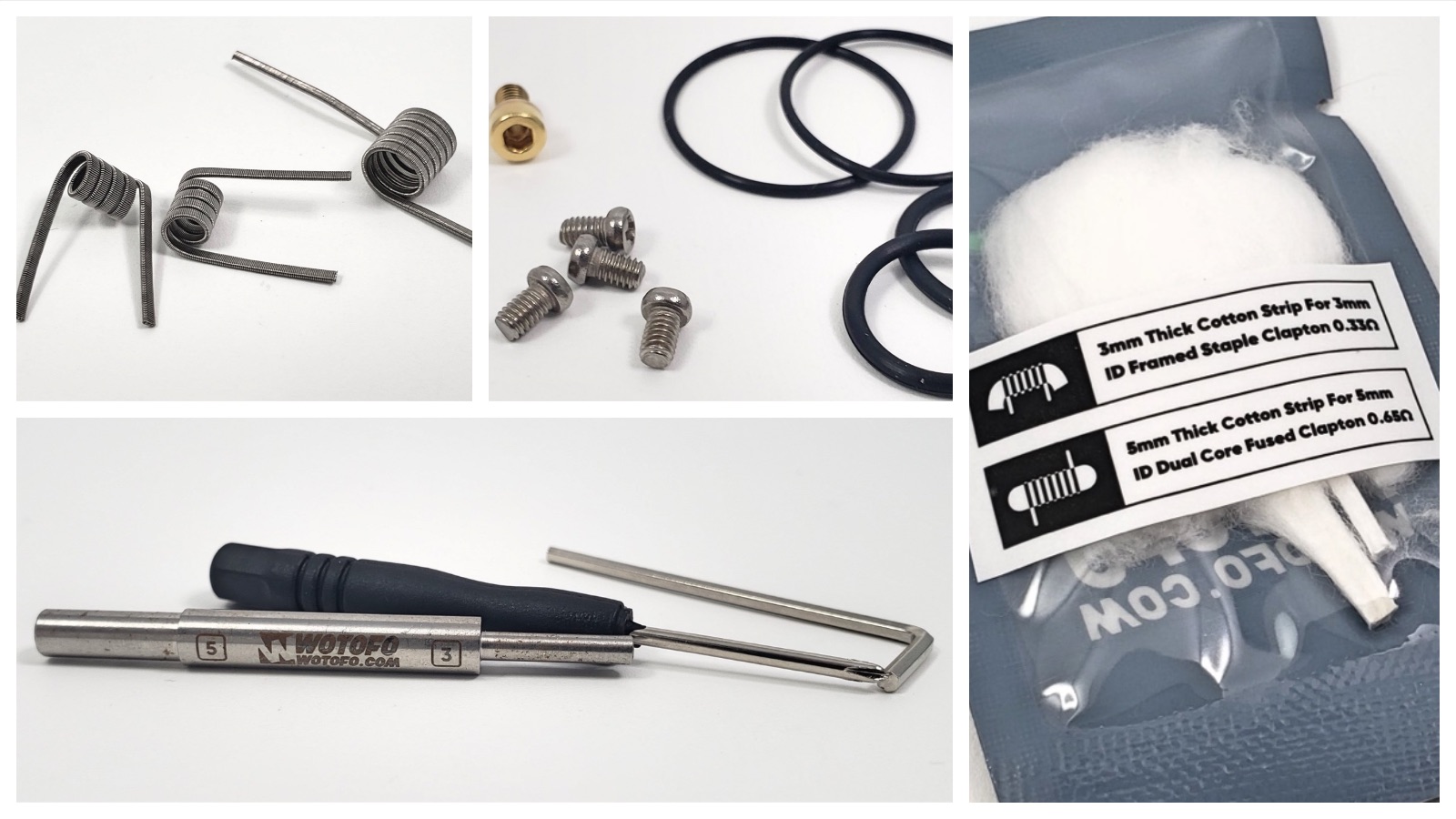 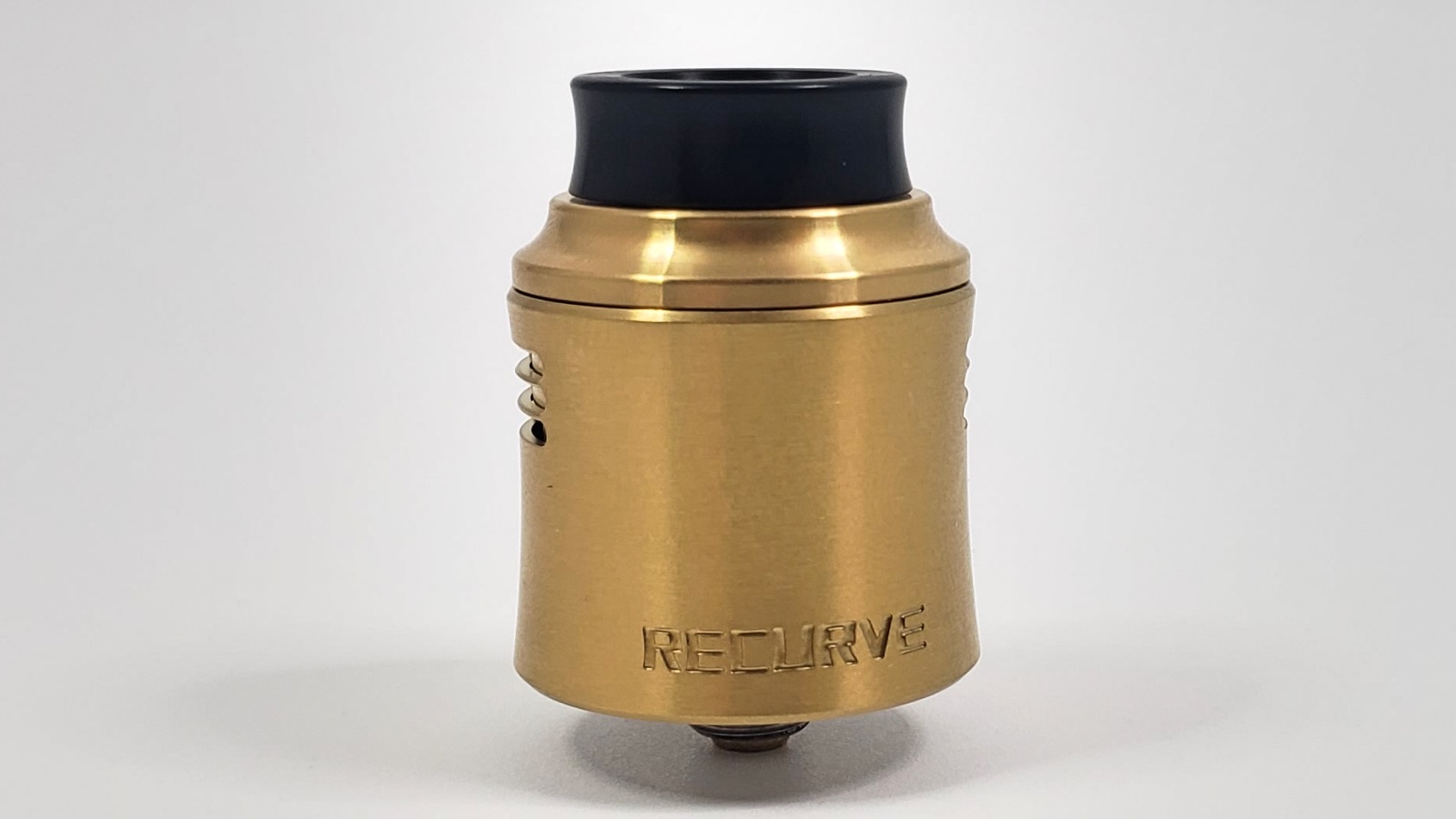 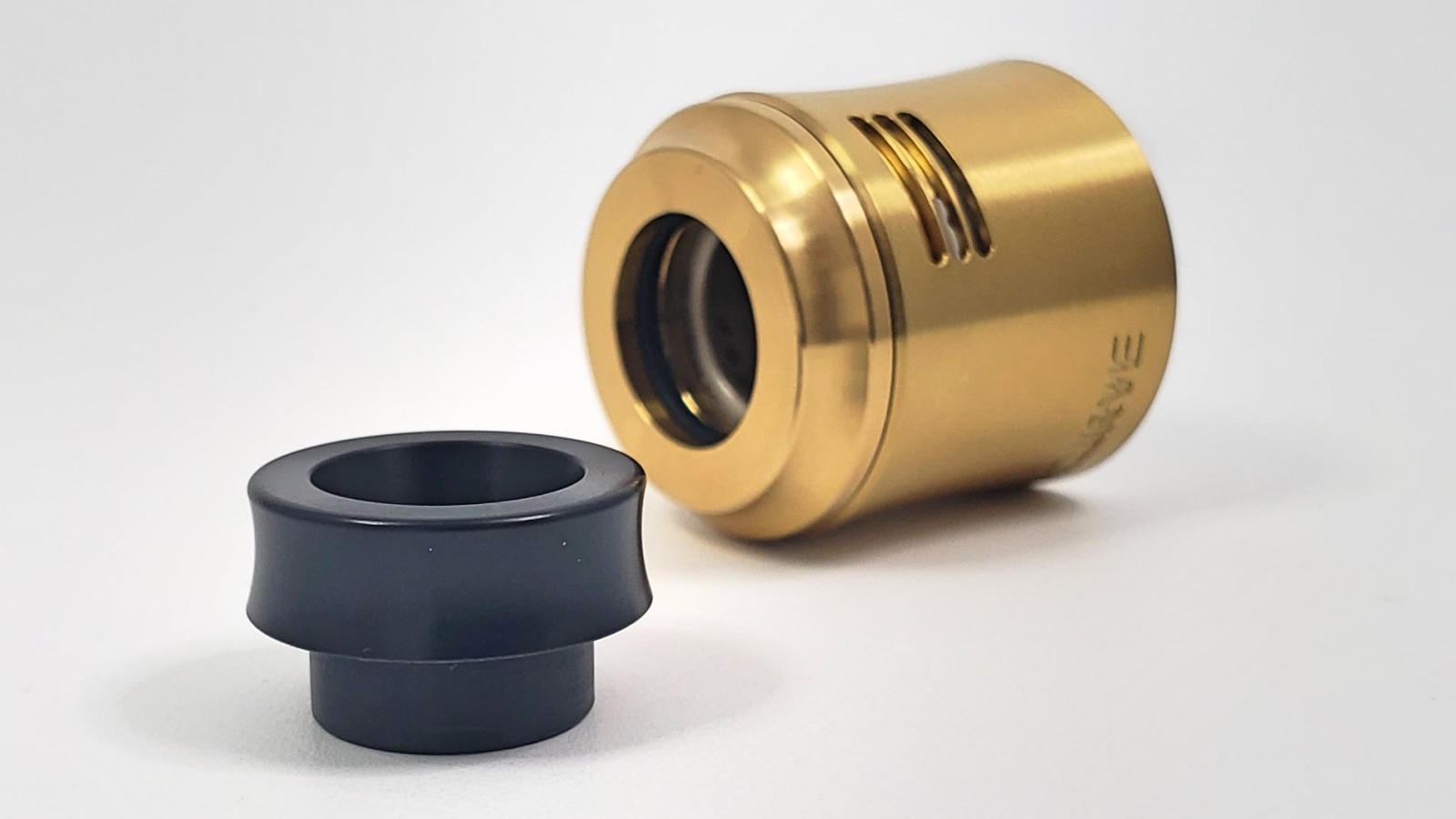 The drip tip is an 810 Delrin tip with a curved design to match the RDA. The last version of the Recurve came with two tips, one of them being a nice low-profile resin tip and the other a very curvy frosted tip. The V2 comes with only one tip, and it’s now a solid black low-profile version of the frosty tip that came with the last RDA.

I don’t mind only getting one drip tip, but I wish Wotofo would have included a nicer resin tip like both of the previous versions of the Recurve. 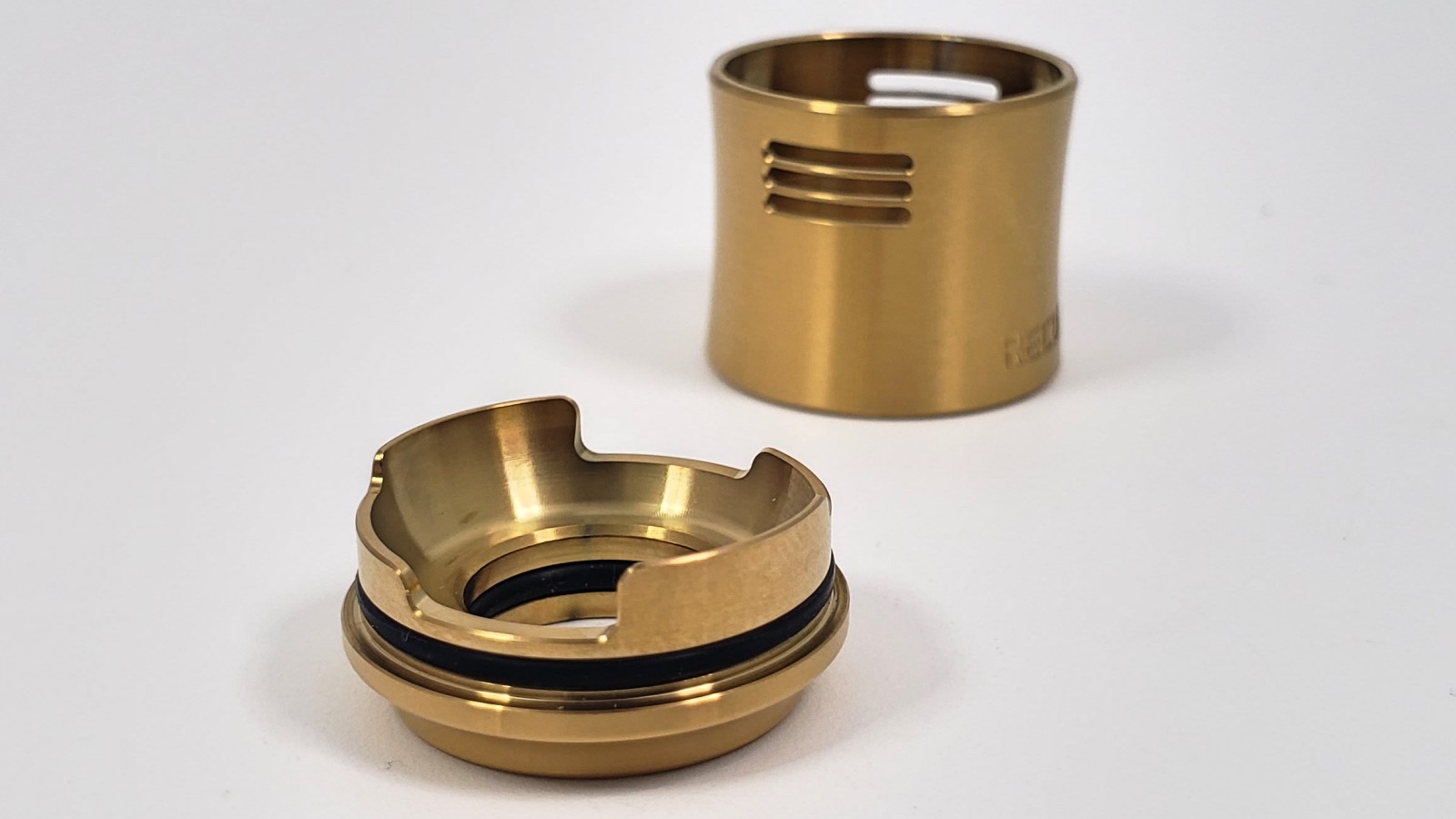 Below the tip is the top cap. This is new to the Recurve line because the previous models didn’t have a top cap. The barrel and top sections were a single piece. And I didn’t care for that all too much because when you turn the barrel to adjust the airflow, the RDA will try to turn, and sometimes it would come off the device unless you lubed up the o-rings with e-liquid. So this is a welcome change, in my opinion. Now you can turn the top cap to adjust the airflow.

When you pull this out of the barrel, you see that it has cutouts for the adjustable airflow. 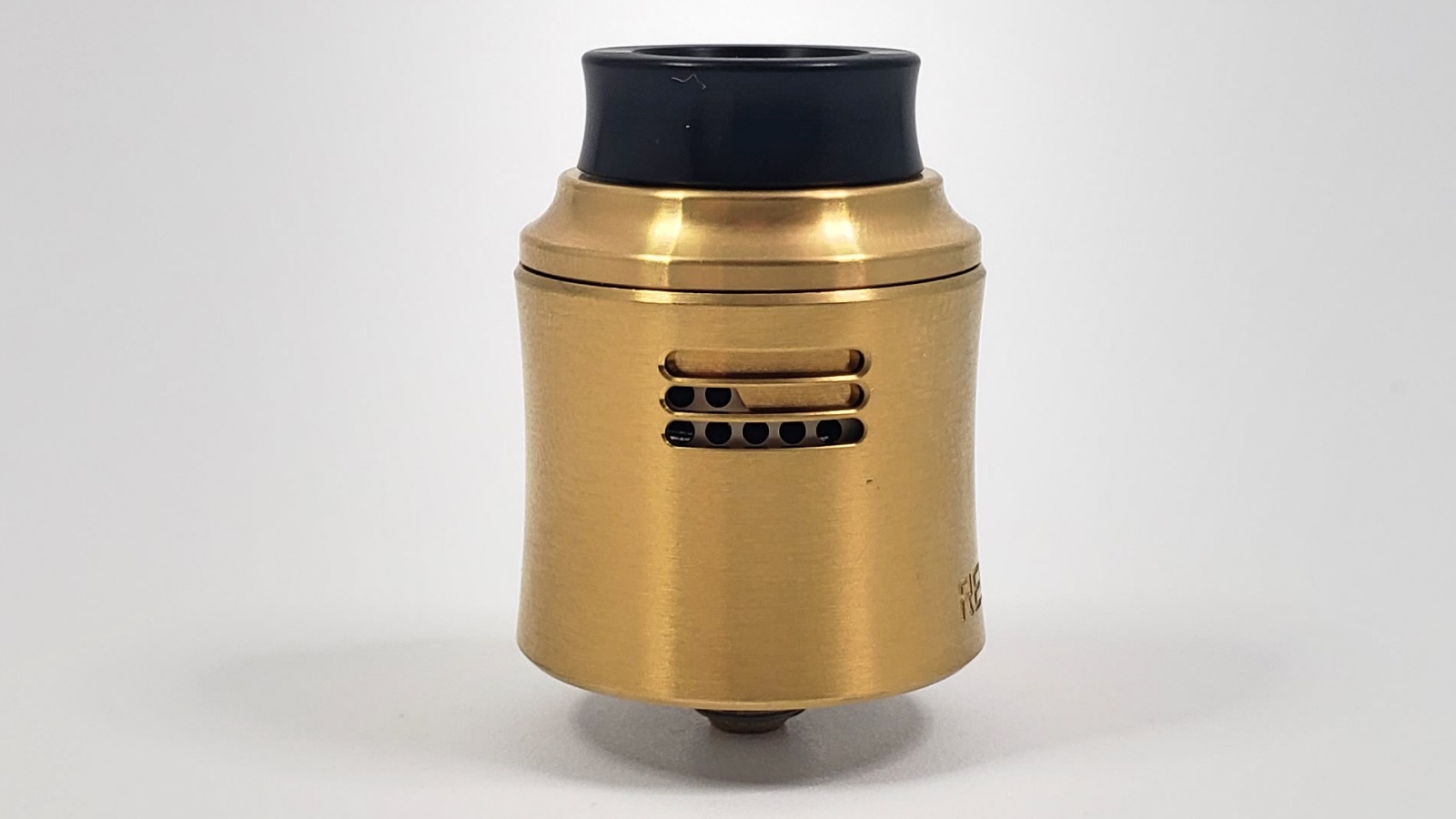 The barrel has six airflow slots, three on both sides. The cutouts on the top cap line up with these slots so that you can adjust the airflow in a few different ways. You can close off either the top row or the top two rows, but you can’t close the bottom row at all. I don’t know why they didn’t make that an option, but I wish they would have.

The top cap is a little snug when adjusting the airflow, but it’s not too difficult to turn. I wouldn’t say it’s perfect, but it’s good.

As for flavor as a whole – is it as good as a tank running a mesh coil? No, I don’t think so. But the flavor overall is pretty good. 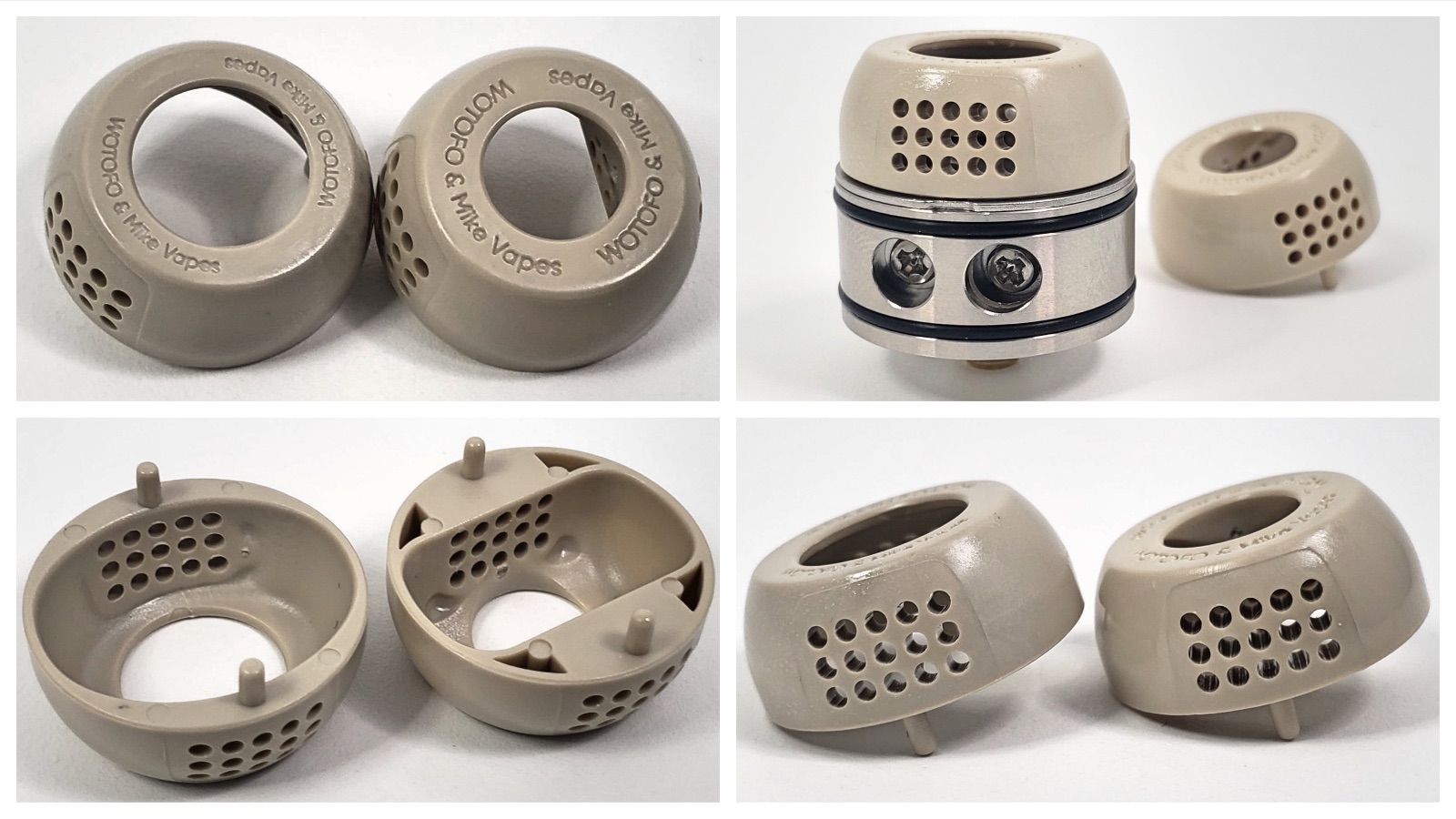 Before building the deck, the first thing to consider is which airflow adaptor you want to use. Now, this is a really interesting idea. Wotofo has made this RDA capable of both single-coil and dual-coil modes simply by using these adapters.

You get two adapters in the box, one for single coils and one for dual. The dual coil airflow adapter is pre-installed. These attach to the deck and sit above the coils, acting as a sort of chimney with honeycomb airflow holes built-in.

I really like this idea because, with a normal RDA, you have to hope that your coils are lined up in the right position to the airflow slots and that the airflow is hitting those coils in the right way to give you the best flavor. With this airflow cap, the incoming air has no choice but to be pulled into the cap and hit right on those coils. Positioning the coils might change things up a little, but for the most part, I’d say that you don’t have to worry so much about coil positioning. The adaptors significantly reduce the size of the chamber and direct as much flavor as possible up the chimney.

The only thing I don’t like about the airflow adaptors is how they look. This RDA is nice and shiny, but these adaptors look like ugly medical accessories. I would have liked for them to be a nice shiny metal. Maybe there’s a reason I’m just not aware of.

One other thing about these adaptors; they don’t stay snug once the deck is coated in e-liquid. So they could pop off if you give it a good bump, and they might come off when you take the barrel off. 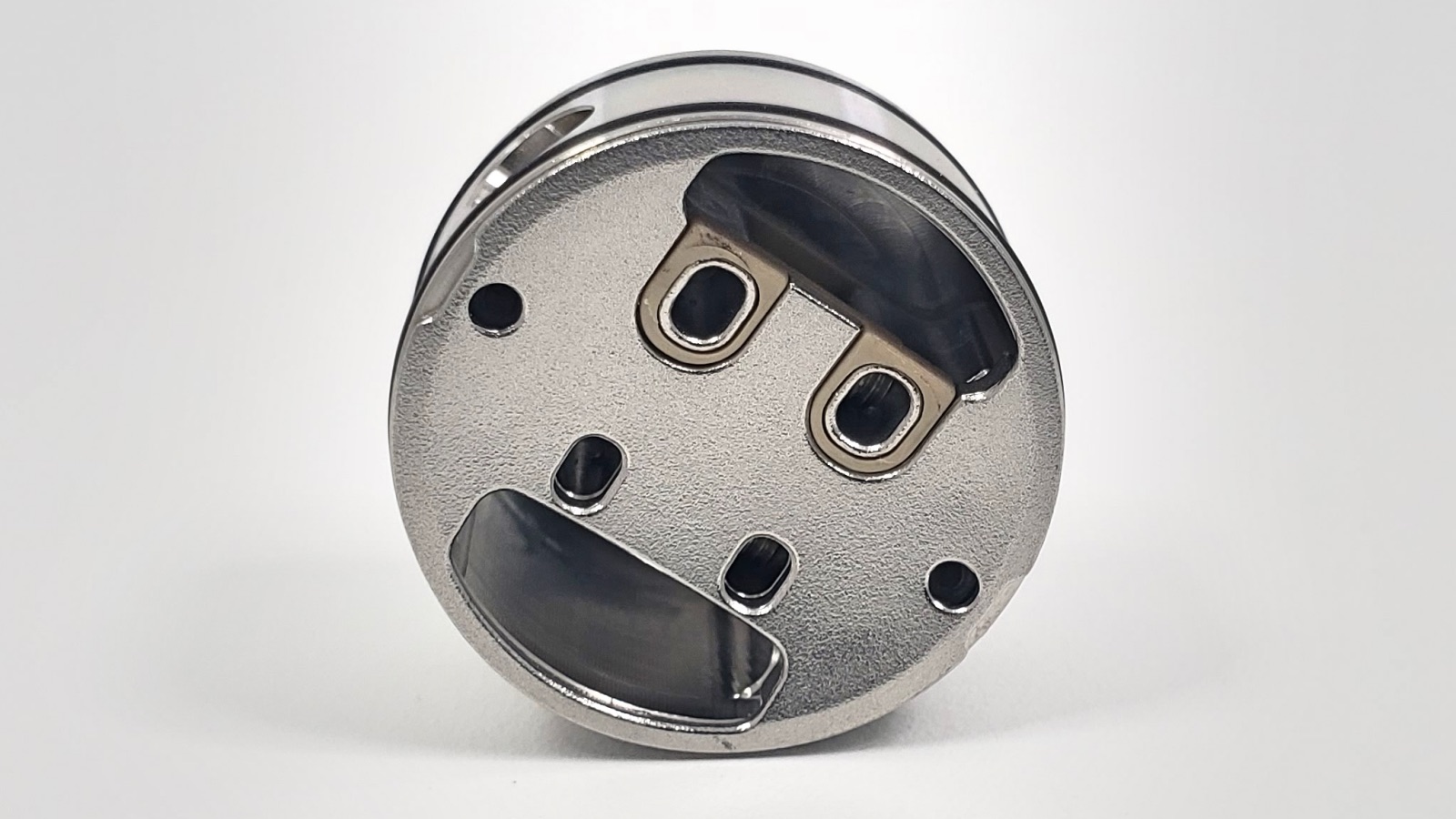 This is a postless deck, so to install the coils, you need to unscrew the screws on the side of the deck and drop the coils down. You’ll need to precut the legs on the coils first, which is one of the things I’ve never really liked about postless decks. Postless decks look cool and clean, but they’re not easier to build – or at least I don’t think so. I have to admit that this deck looks good, though. I think it looks way better than a deck with posts. This is sleek. 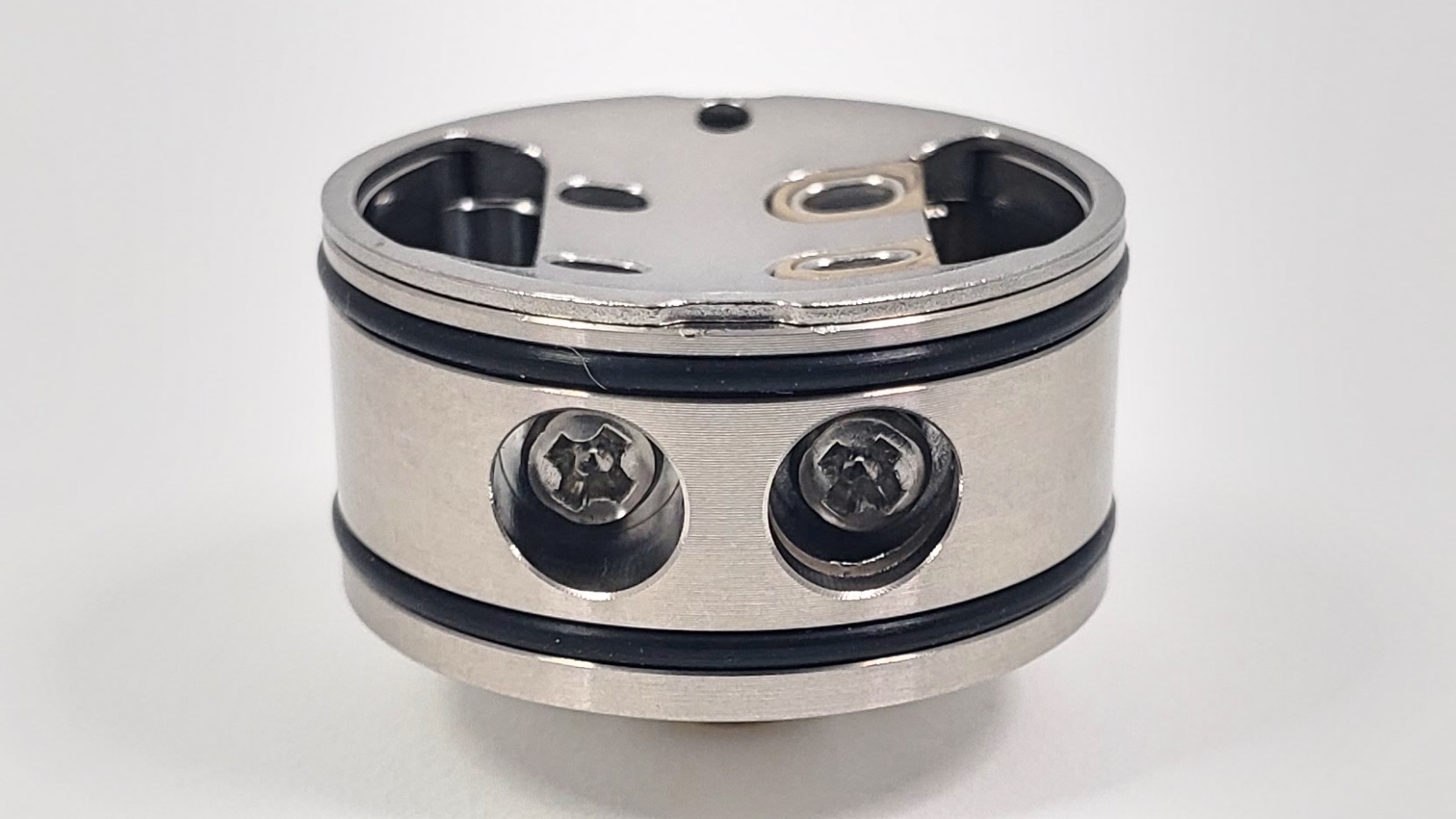 Wotofo recommends using a max size of either two 3mm inner diameter coils or a single 5mm diameter coil. They’ve included both of those in the box so that you can test the RDA out in both configurations. 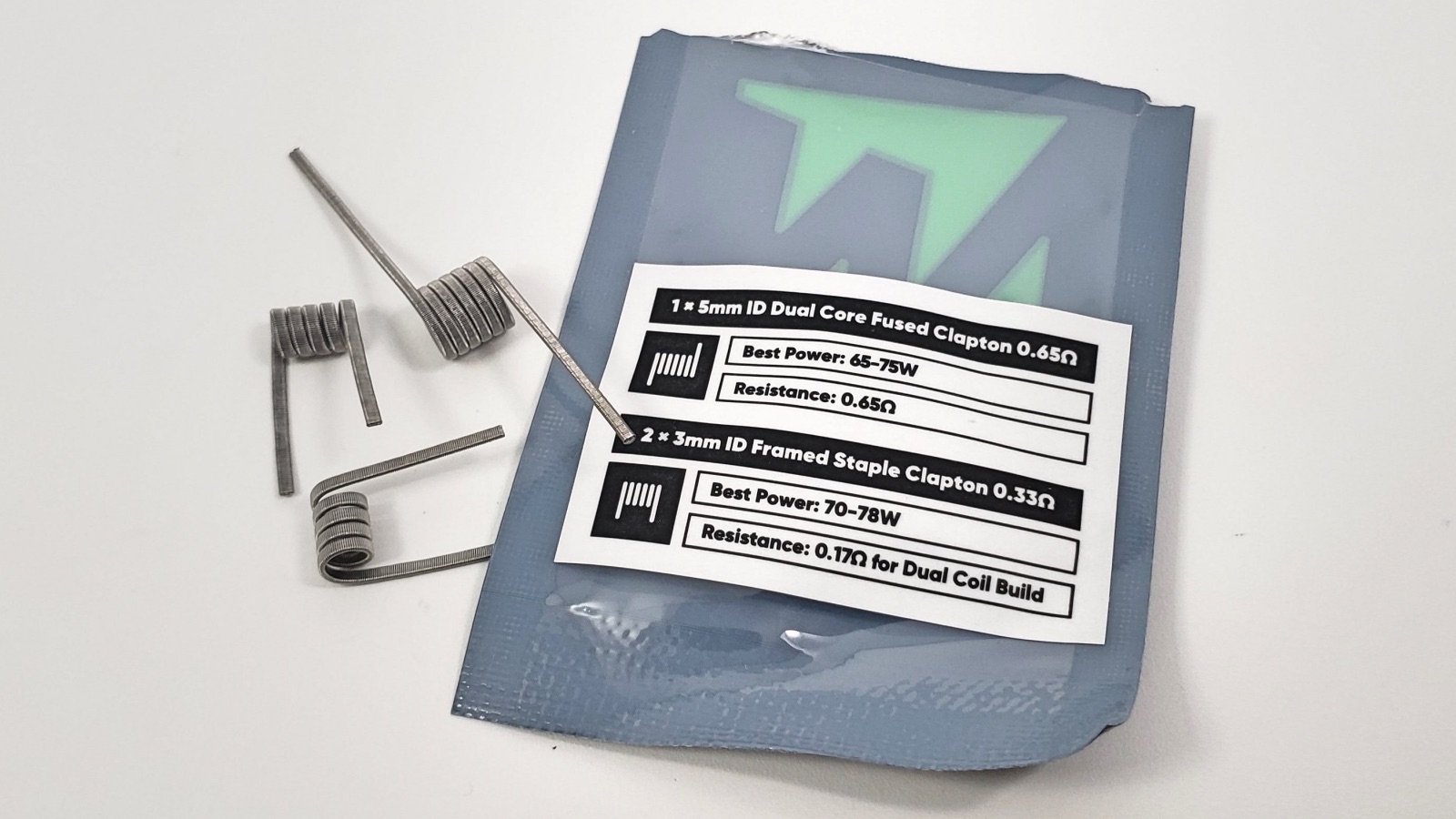 Since this is a postless deck, you’ll need to cut the coil legs before putting them in. You can cut these down to anywhere from between 6.5 to 8 mm with your coil measuring tool. Wotofo didn’t include a measuring tool, which is a bit of a bummer. All vape companies should include a coil cutting tool with postless deck RDAs, but if you don’t have one, you’ll have to play around with how short you cut the coil legs until you hit a good spot. And if you didn’t know, there are 10 mm in a centimeter, so if you have a standard ruler, look at the centimeter side and measure the legs up to 6-8 lines leading up to a centimeter and then cut them there. 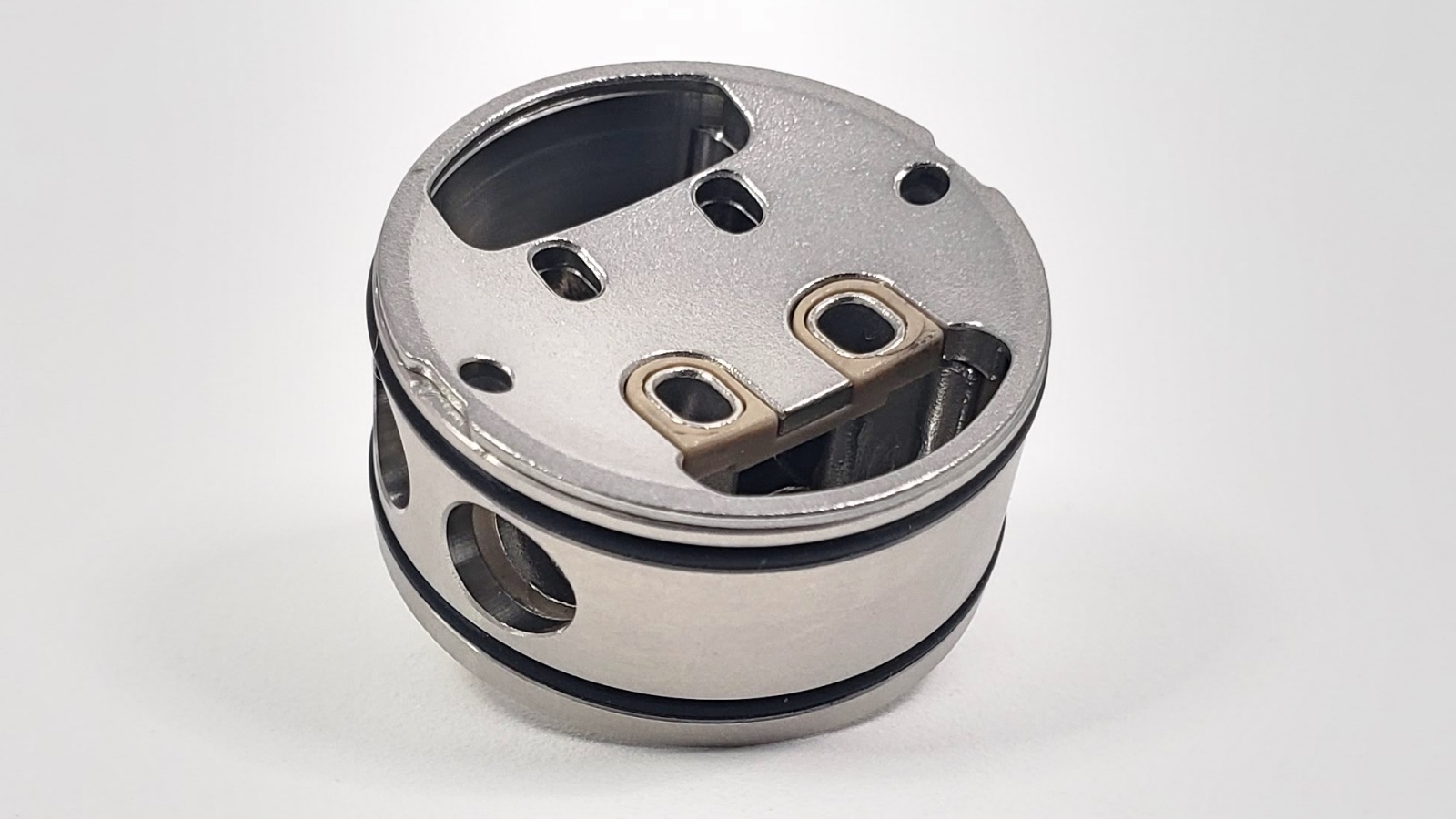 There’s also a squonk pin in the box, so if you want to use this on a squonker, you can easily swap that pin out.

This RDA isn’t as easy to use as a dripper as I would have liked for two reasons;

So it’s a little more cumbersome to use as a dripper and a little messier. Like the previous versions, it seems a lot more suited to squonking but it still works fine as a dripper. 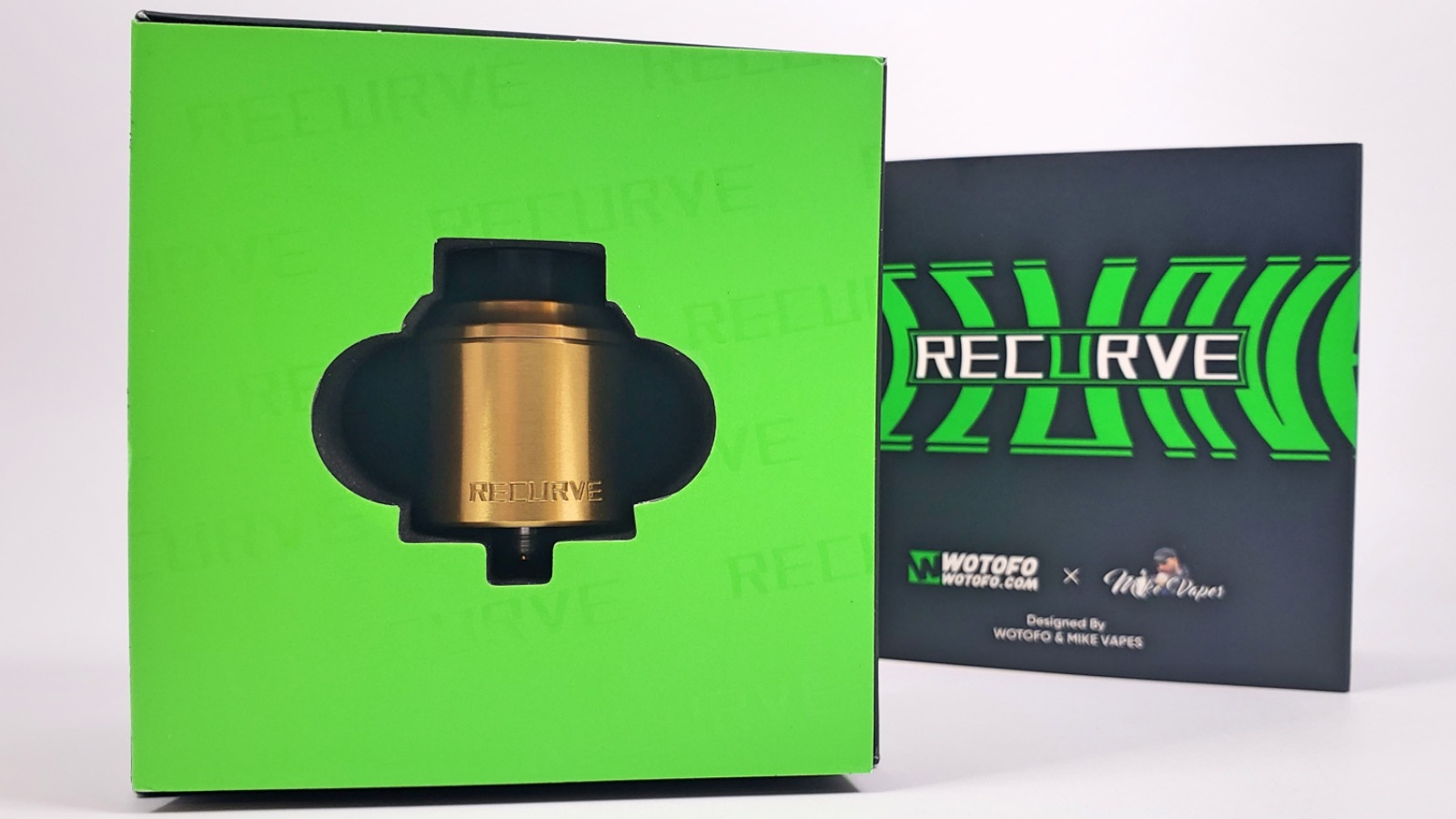 So that’s the Recurve V2. It’s a great-looking RDA that performs well and has good flavor.

The airflow is nice and smooth, and I like that you can use this in both single and dual code modes with the caps designed to restrict the airflow specifically for each coil mode. I think the airflow caps are a little ugly, but that has nothing to do with performance. I also wish you could close the last airflow row on the barrel, which would have been especially useful for single-coil mode.

I also like that Wotofo separated the barrel and top cap into two sections and that the top cap is now used for airflow adjustments. I would have liked a nicer resin drip tip, and it would have been nice to include a coil cutting tool, but those aren’t necessary to get a good vape out of this.

This was sent to me from Wotofo, and you can get one from them at Wotofo.com for $34.95