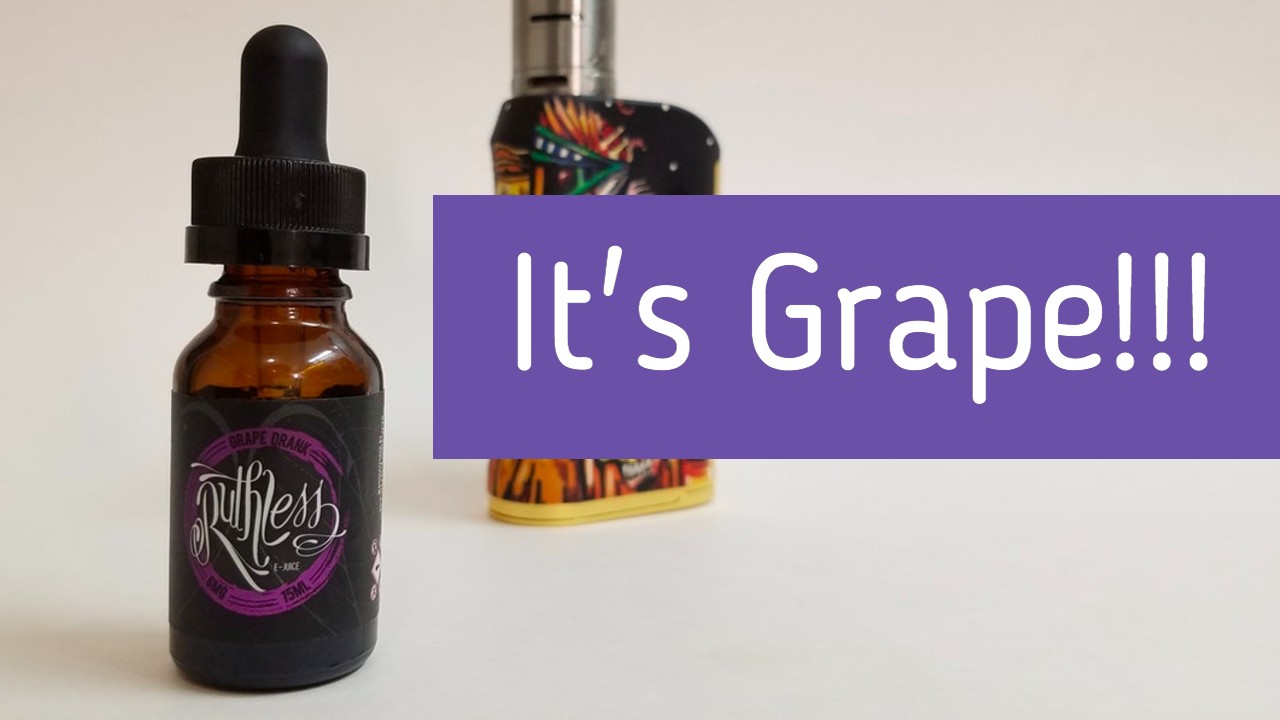 I bought this e-juice myself.

I’ve actually reviewed Grape Drank before, but it’s the number one video that I get crap for, mainly for vaping it at only 10 and 20 watts. I published it in January 2016, but it was actually recorded in May 2015 right after I bought my first RDA, the Smok Caterpillar. That’s how I was vaping two years ago and how a lot of people were still vaping. Sub-ohm vaping at 100 watts or higher wasn’t a thing yet. This was a time when people thought 60 watts was high.

I think Grape Drank is such a popular e-juice even today, which says a lot, but it’s still so popular that a lot of people find my old review not realizing how long ago it was recorded. And a lot of these people probably weren’t vaping 2-3 years ago and they don’t realize how different the products were back then. I regularly get comments making fun of how low I was vaping, to which I usually respond that it was a different time, and then they usually delete their comment.

So Grape Drank is described by Ruthless as grape soda and grape candy. And I see they have a new label now, which looks nice.

Ruthless used to say this tasted like grape skittles, but they probably changed it to grape candy before they got in trouble.

In my original review, I thought that Grape Drank tasted like grape soda, but not candy, and it had a really strong perfume taste. After coming back to it a month later, the perfume taste went away. Grape Drank is pre-steeped, so it shouldn’t have that problem, but it did. I think it just wasn’t pre-steeped long enough. And it’s not just me. This is another common comment I get from people on this video. They think it tastes like perfume too.

So let’s see if anything has changed…

I tested this using the Asvape Michael mod using the Goon 1.5 RDA built at 0.29 ohms at 125 watts

It smells just like I remember it. Smells like grape soda. Still don’t get the candy smell out of it.

It tastes like I remember it too. I mean after it steeped for longer than a month. It doesn’t have a perfume taste this time. I’m not sure if they pre-steep longer now or if this bottle has just been sitting around for a long time. It tastes like a grape soda. I still don’t get much of a candy taste, but it tastes like grape. It’s really sweet and really good.

I got 6mg nicotine and it’s not harsh at all.

BUT! I want to point out that this is one of those love it or hate it e-juices. Some people think it tastes like medicine and some people, like me, love it and say it tastes like grape soda. So if you do buy it and don’t like it, don’t say I didn’t warn you!