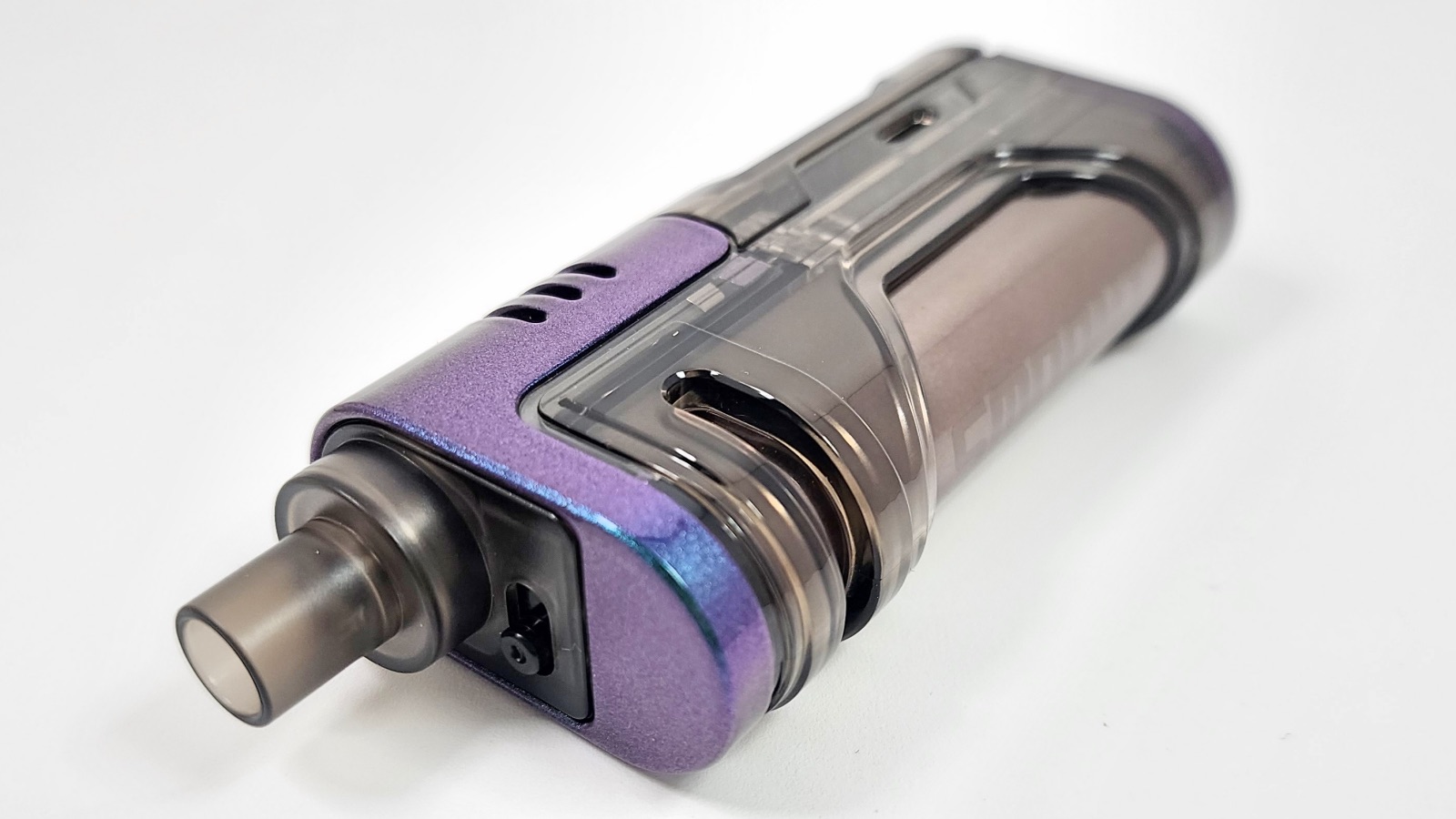 The Knight 40 was sent to me for review from Smoant. This is a 40-watt pod mod that uses replaceable coil heads, it has great flavor, adjustable airflow, and it has a cool, unique look. 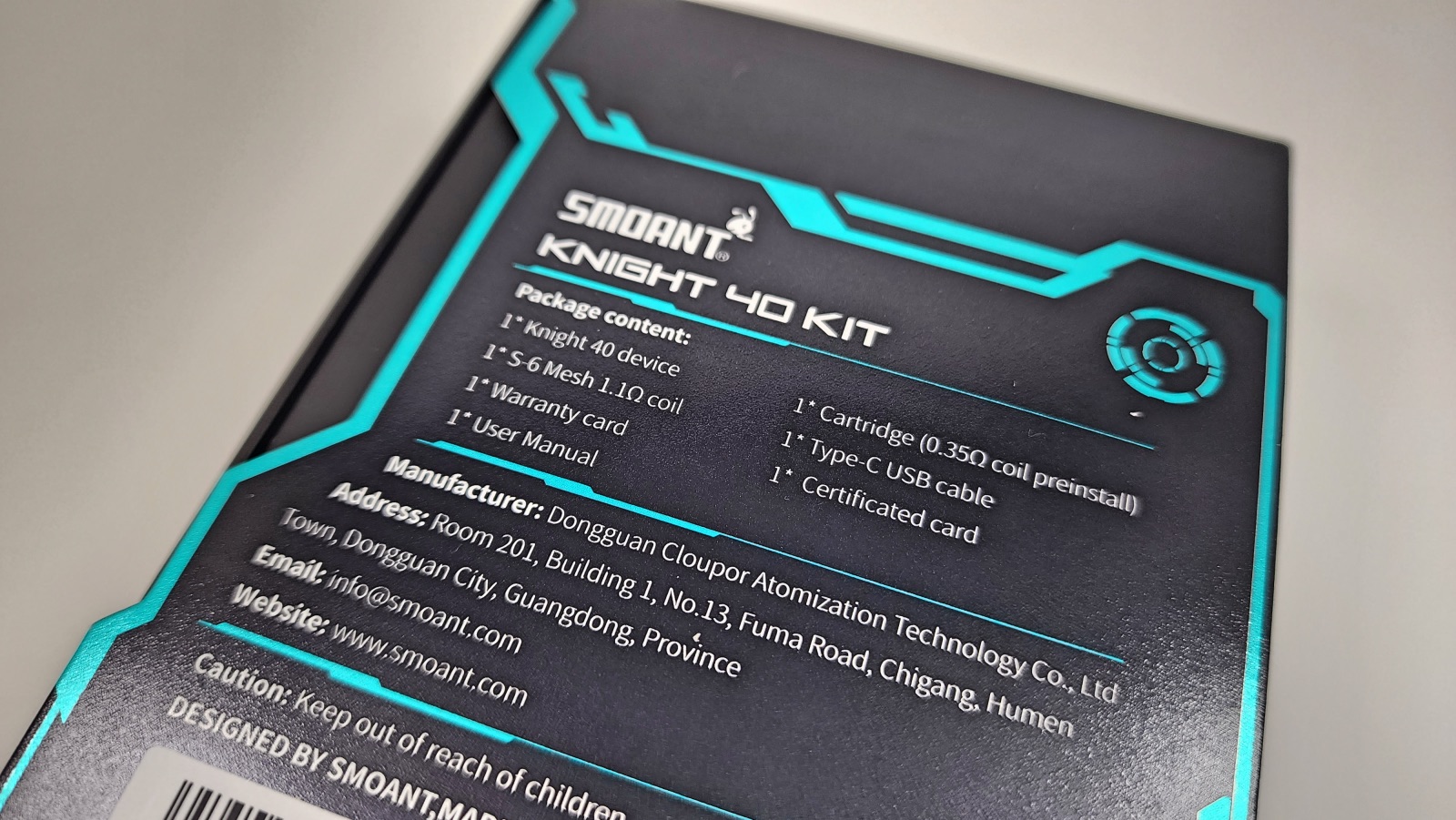 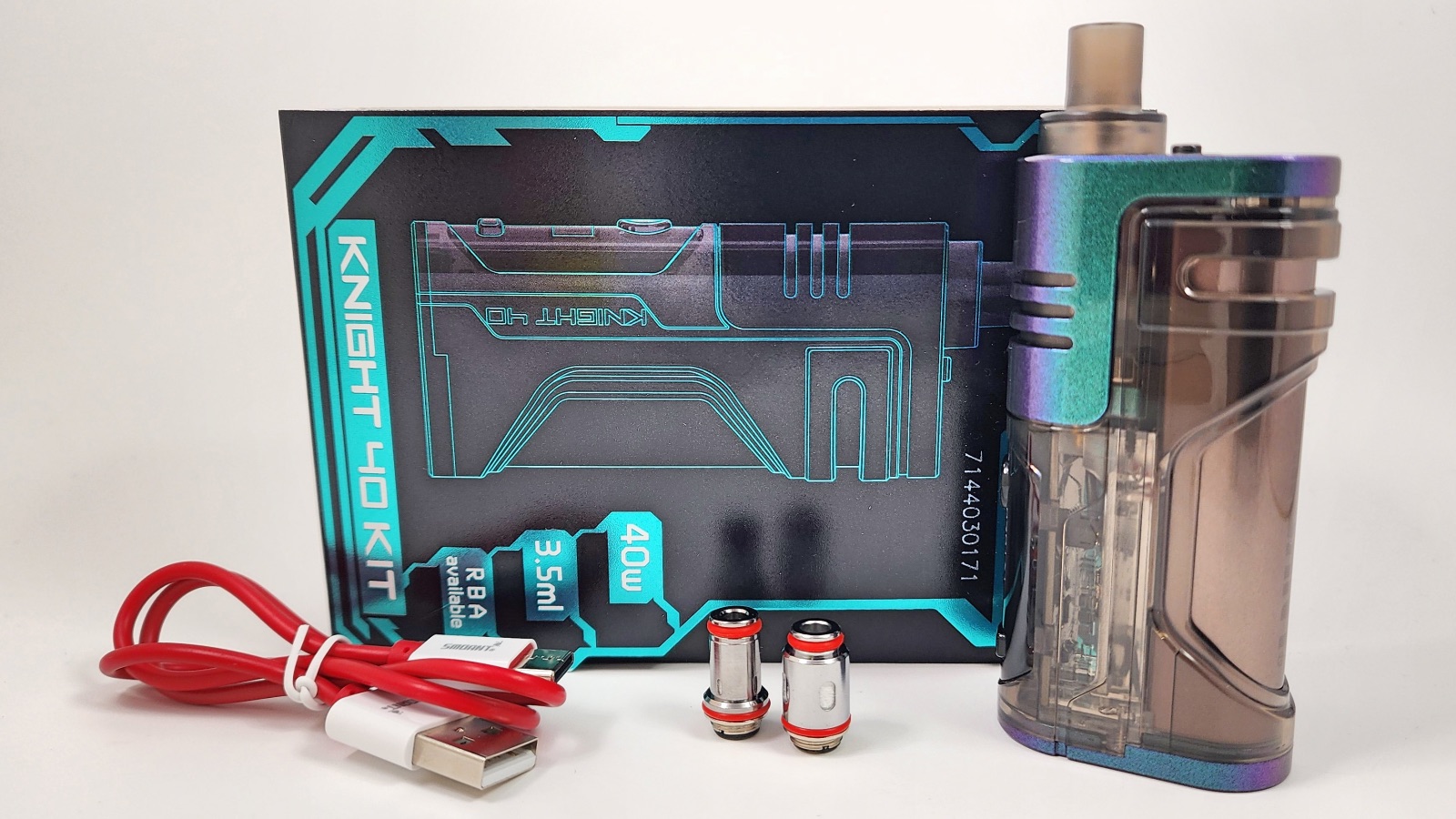 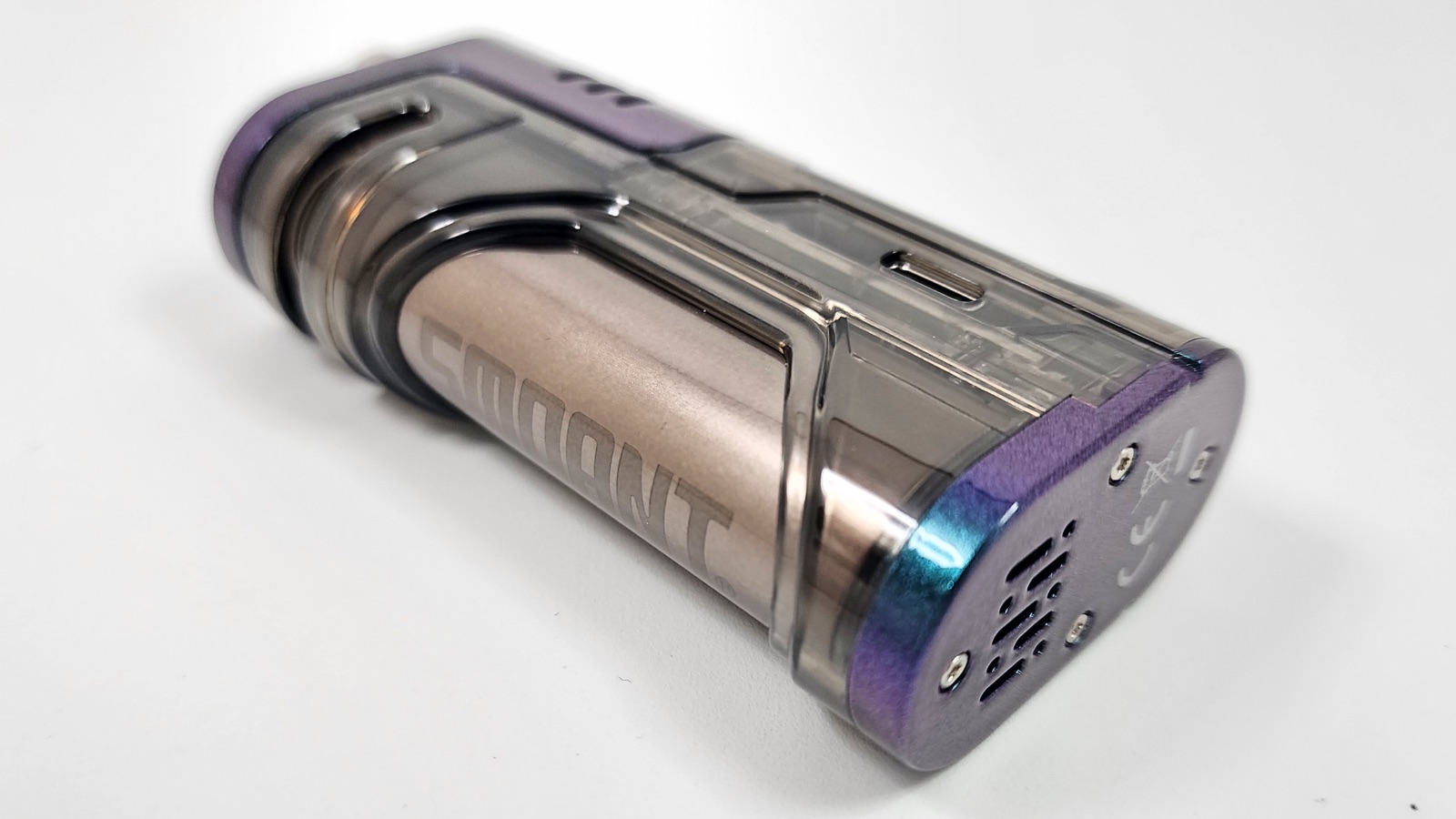 The body of the Knight 40 is made of zinc alloy and PCTG; just a small part of the body is made of metal, and the rest is clear plastic. It looks great with a sort of cyberpunk vibe. I don’t know if that’s what they were going for, but that’s what it looks like to me. Smoant also named this the Knight, as in Knight in Shining Armor and I wonder if the top metal part of the frame is supposed to be like the Knights helmet. 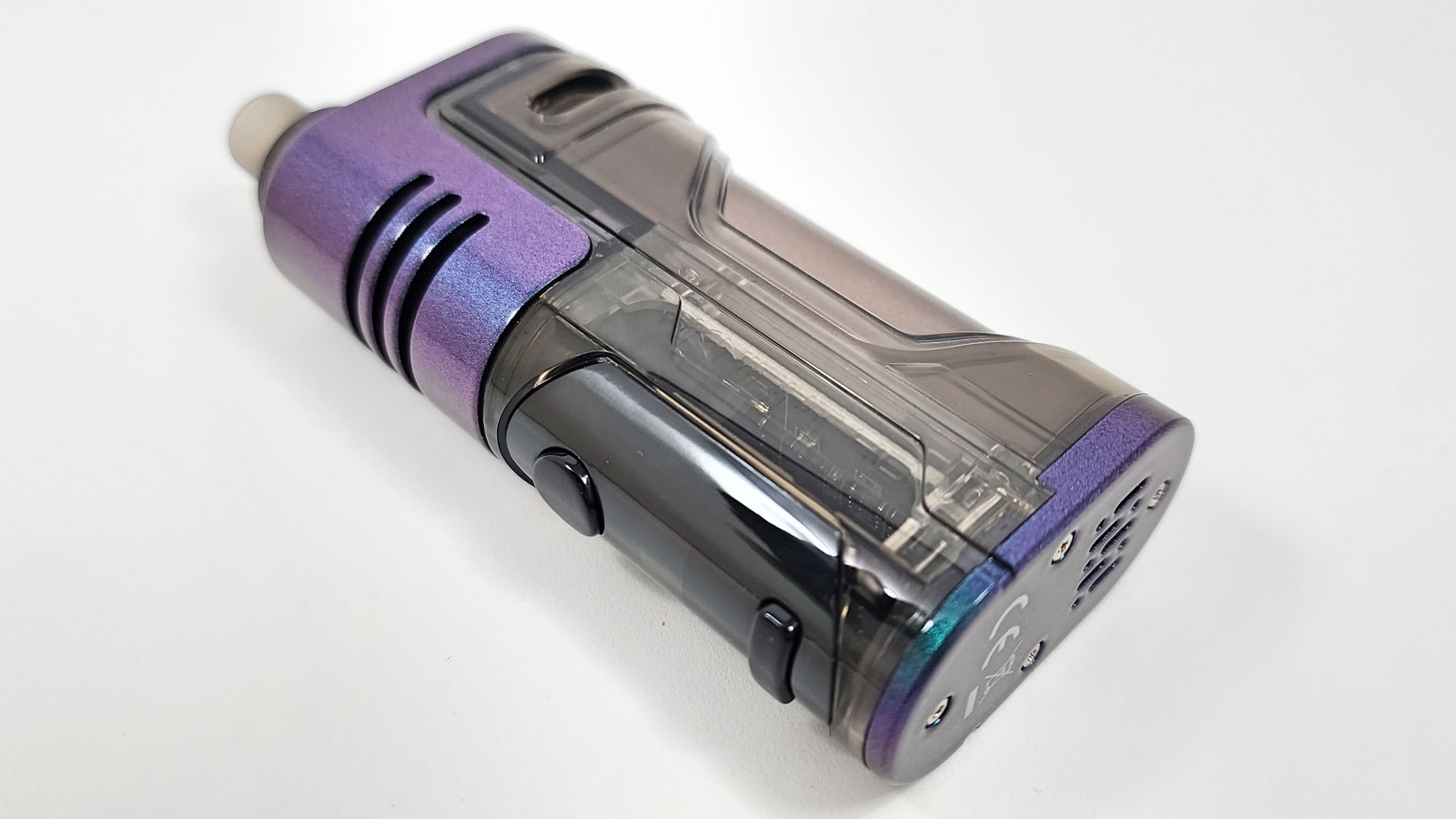 On the firing panel side of the device, there’s a firing button, an LED screen beneath that, and then some up and down buttons. The buttons feel nice and clicky, not squishy. And to the left of the screen is the USB-C charging port.

I do want to talk about the firing button. So the device feels really good in the hand. I love holding this thing. But I don’t like the position of the firing button because if I want to grip the whole device, I have to fire it with my middle finger, which isn’t comfortable. Since I like to use my pointer finger, I have to hold the device lower than I’d like. If that button was just a little higher, it would have been perfect. 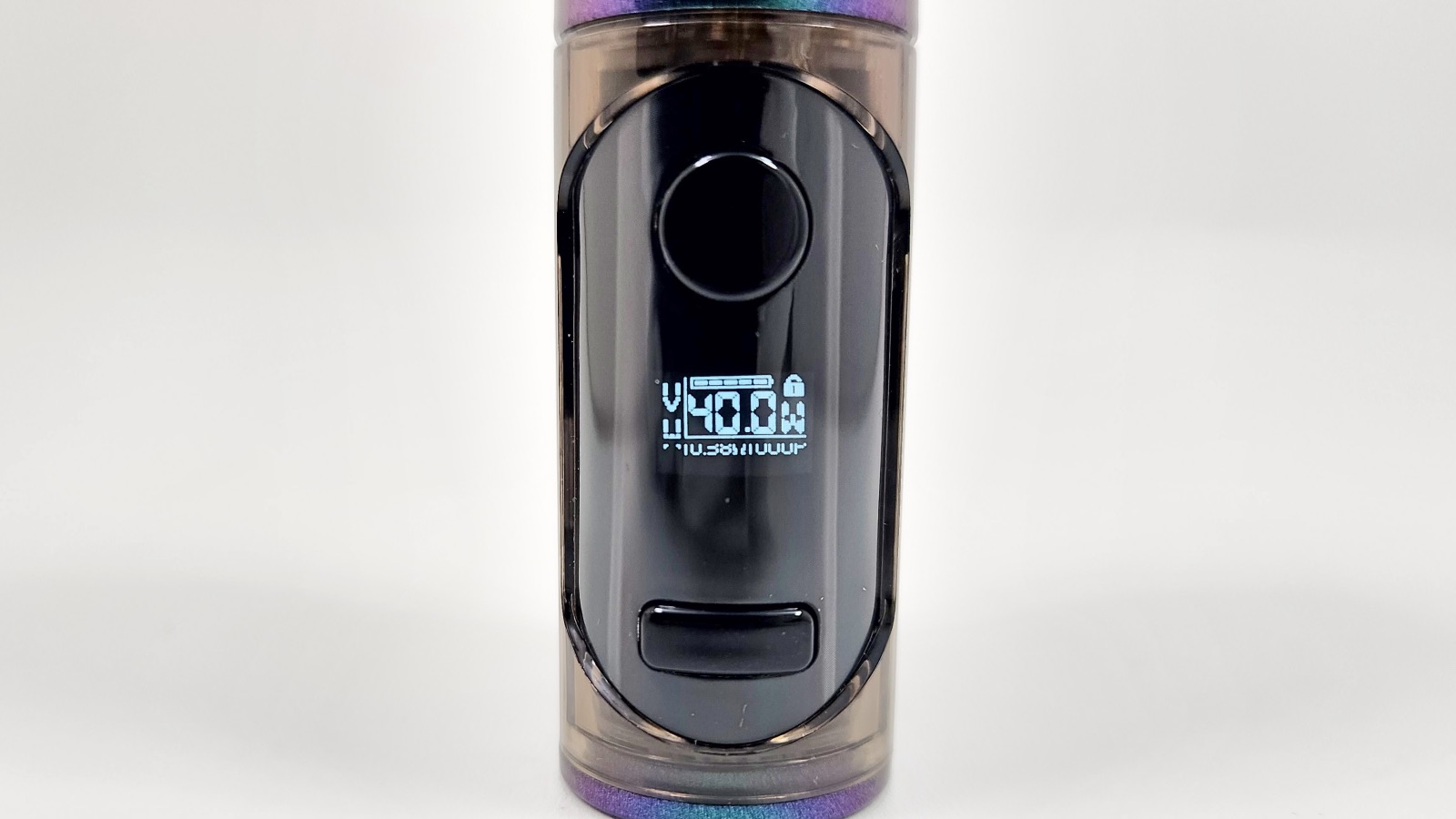 The screen is a 0.42-inch screen that shows the mode you’re in, the battery life, the lock symbol, your power setting, the resistance of your coil, and a puff counter. The screen quality isn’t very good, and that’s a little disappointing, but it works fine and shows you everything you need to know. There is one big flaw here with the screen, though; it’s crooked! I hope that’s not a common problem. 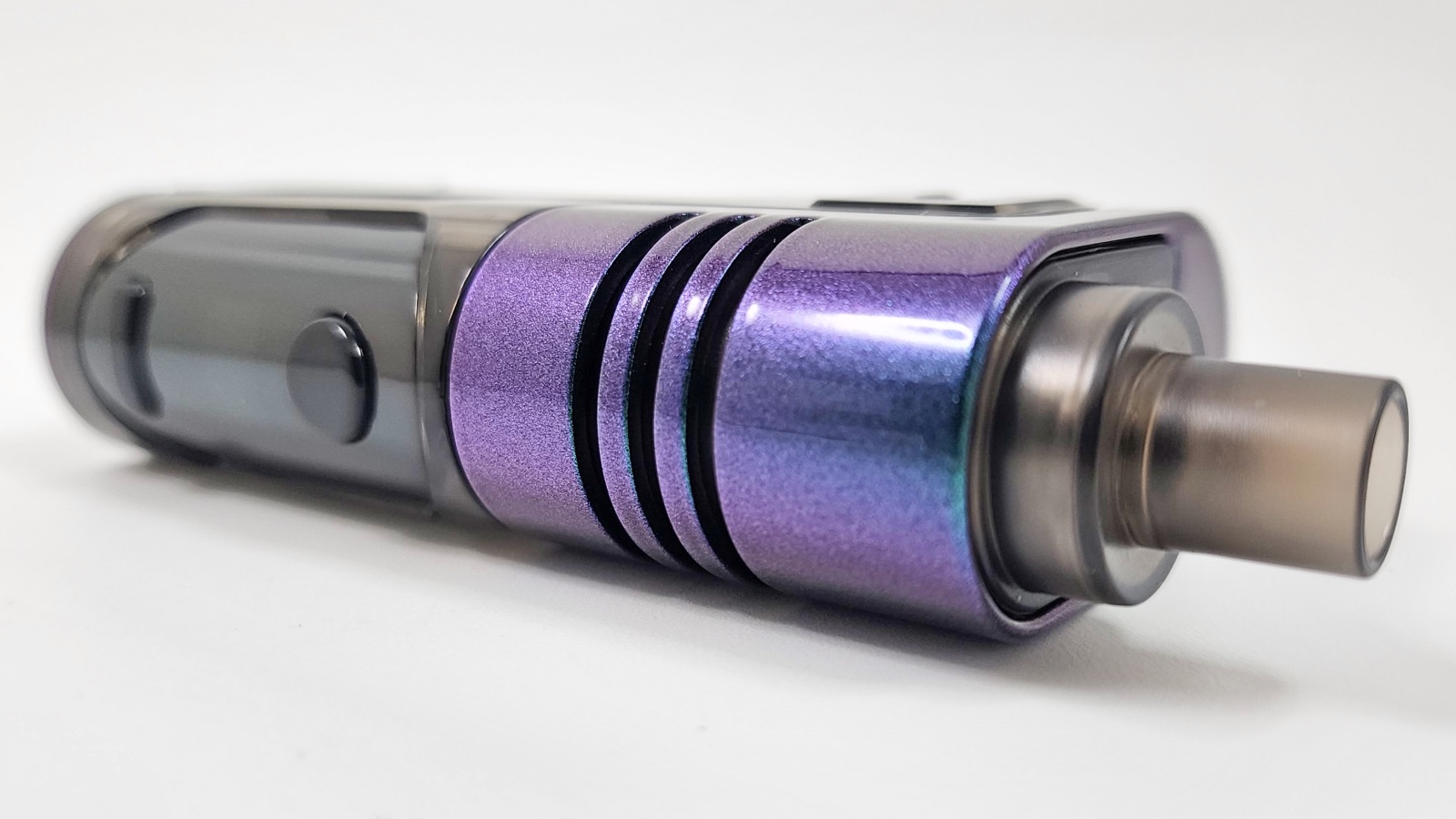 I love the color that Smoant sent me. It’s really hard to pick up on camera, but have you ever seen a car painted with color-changing paint where it has different shades of purple and blue depending on the angle you’re looking at it? That’s what this does. It’s really cool. 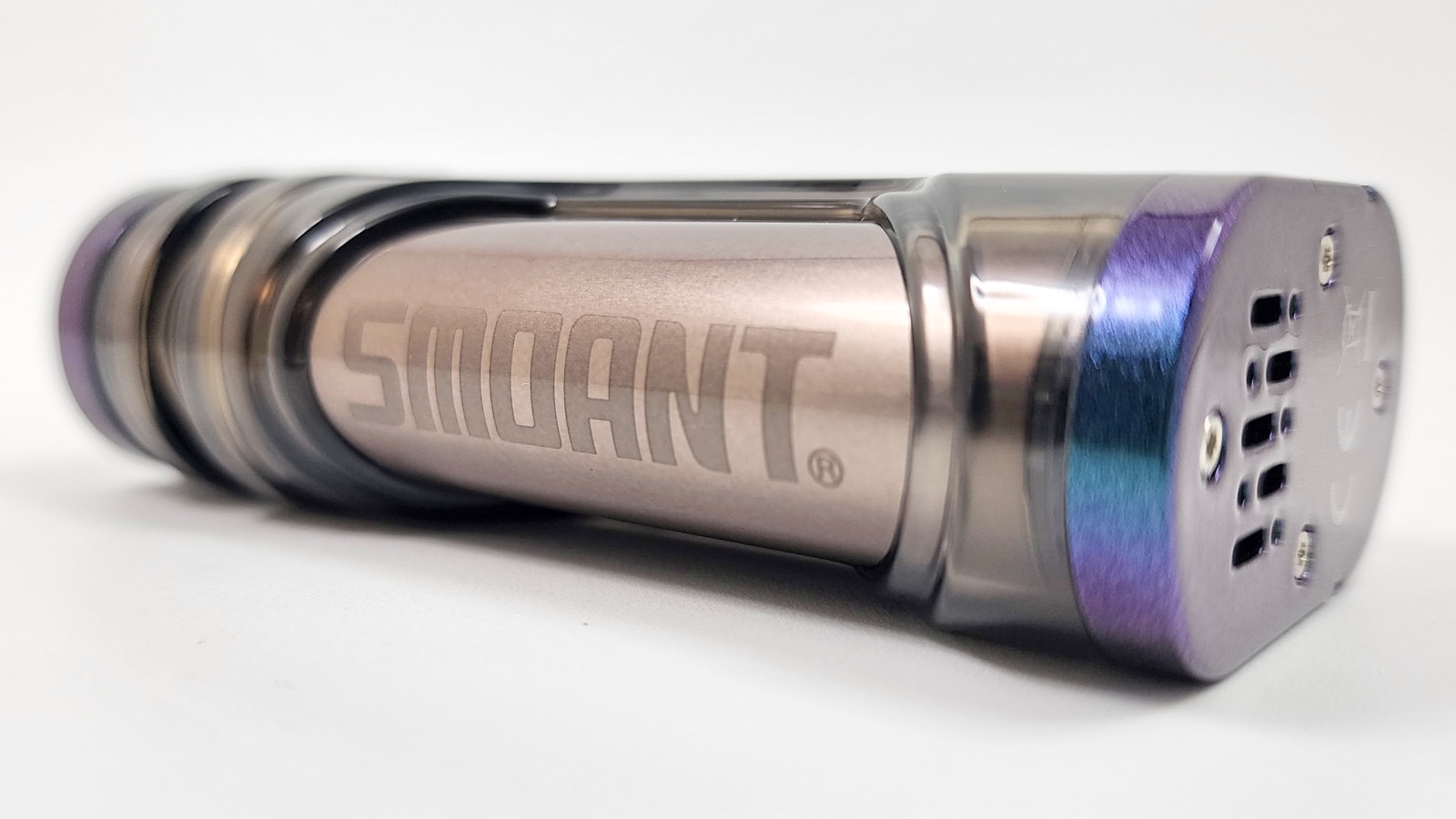 To turn the device on, press the firing button five times fast; and the same to turn it off.

The Knight 40 auto-adjusts wattage depending on the coil that you’re using, and the screen shows you the range of wattage that you should use for each coil. That’s a cool feature because you won’t have to take the coil out to check the wattage if you forget. You’ll find that the auto wattage settings will usually set the device right in the middle of the suggested coil ranges, so it should be a good vape without having to change anything. But you’re not limited to the auto-settings. You can change the wattage manually if you’d like, even outside of the range recommended for the coil. 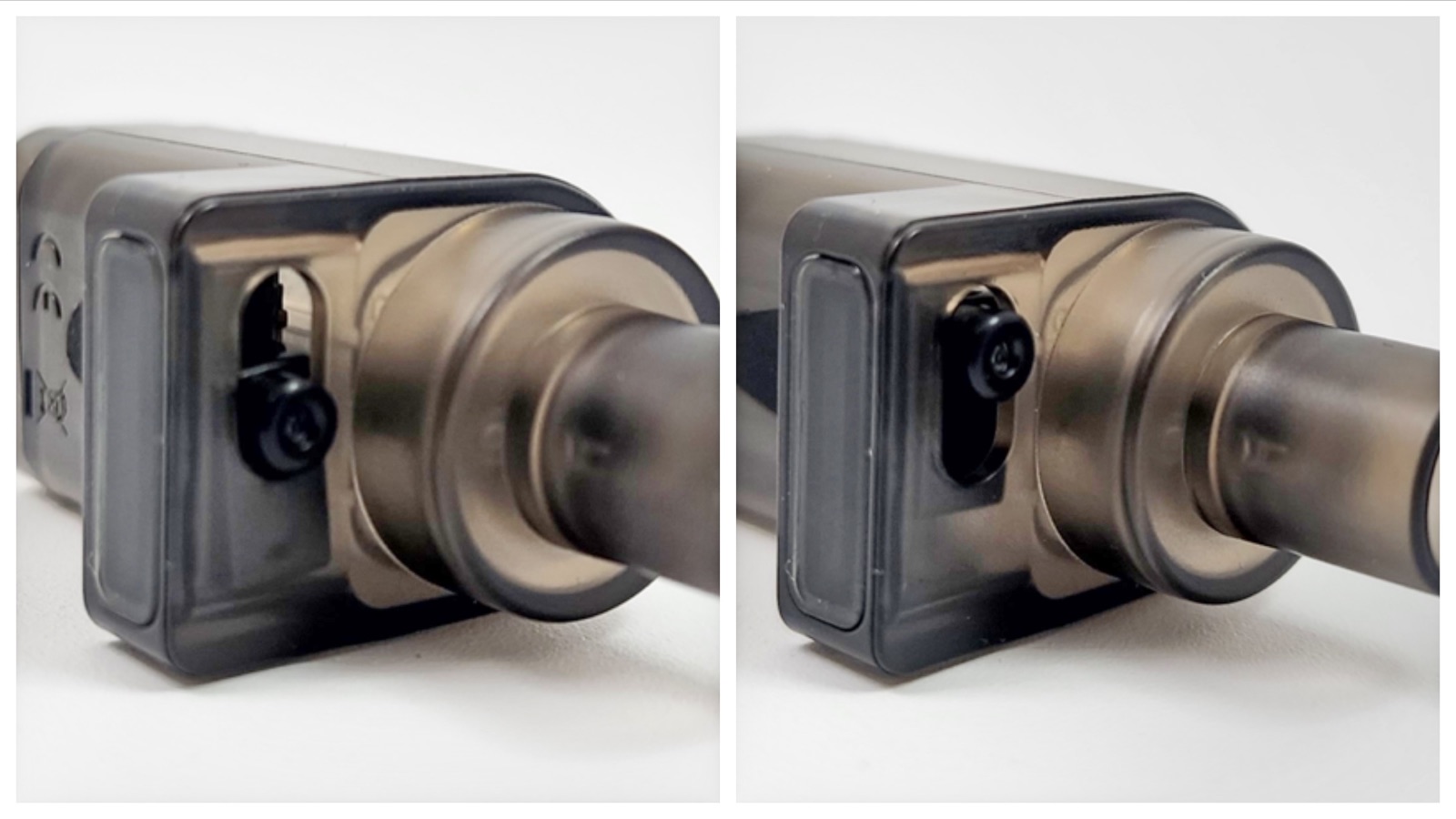 The airflow comes into the pod cartridge from the top of the device. It goes in, leads down beneath the coil, then back up through the chimney to the mouthpiece. You can flip the switch at the top of the cartridge to change the airflow. With the switch moved over to one side will give you a direct lung hit, in the middle is a restricted lung hit, and to the other side, a mouth-to-lung hit. 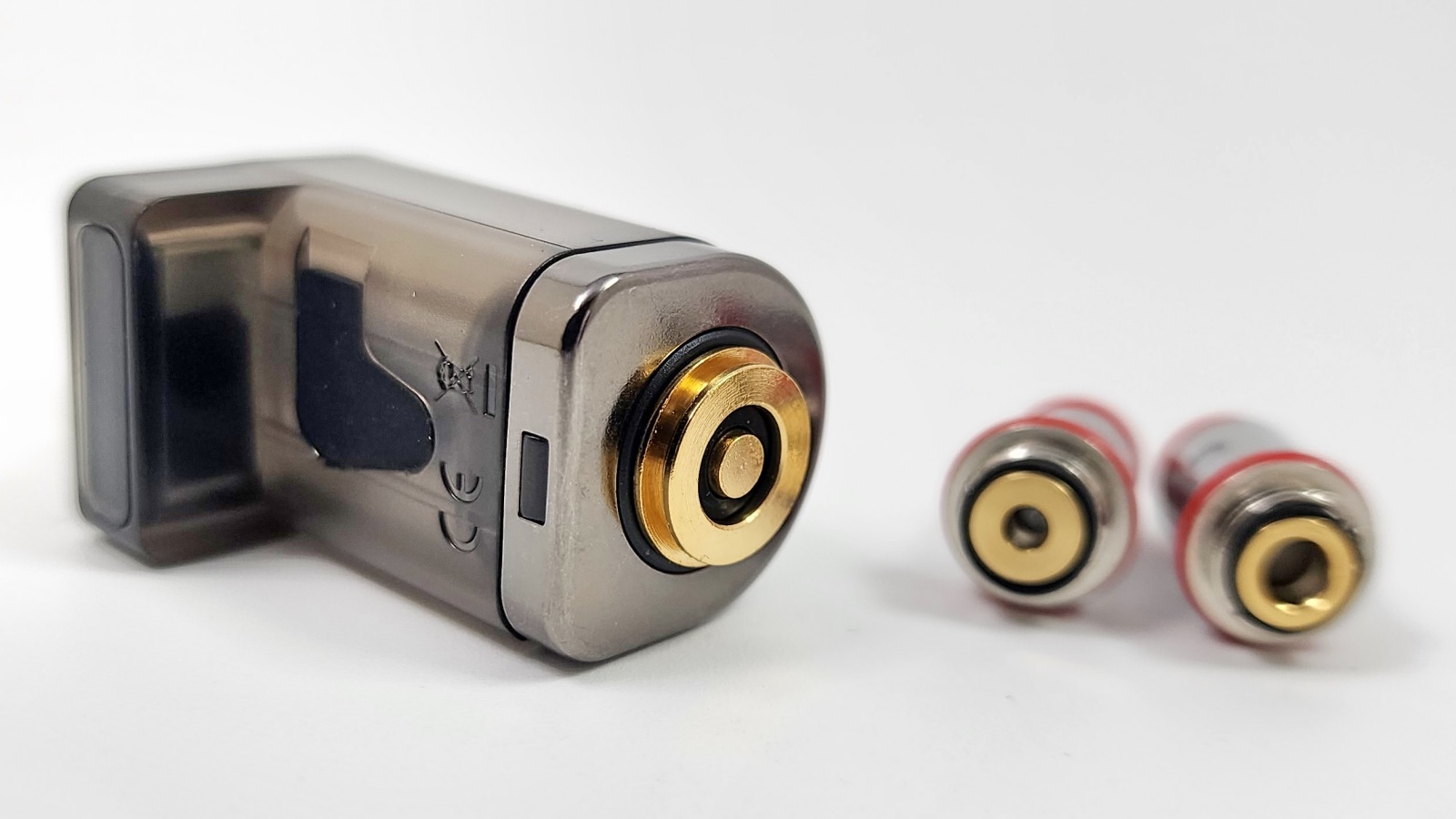 The cartridge holds 3.5ml of liquid and can use up to 7 different coil heads. At the top of the cartridge is an airflow control switch, and below that is the rubber e-liquid fill-port plug. 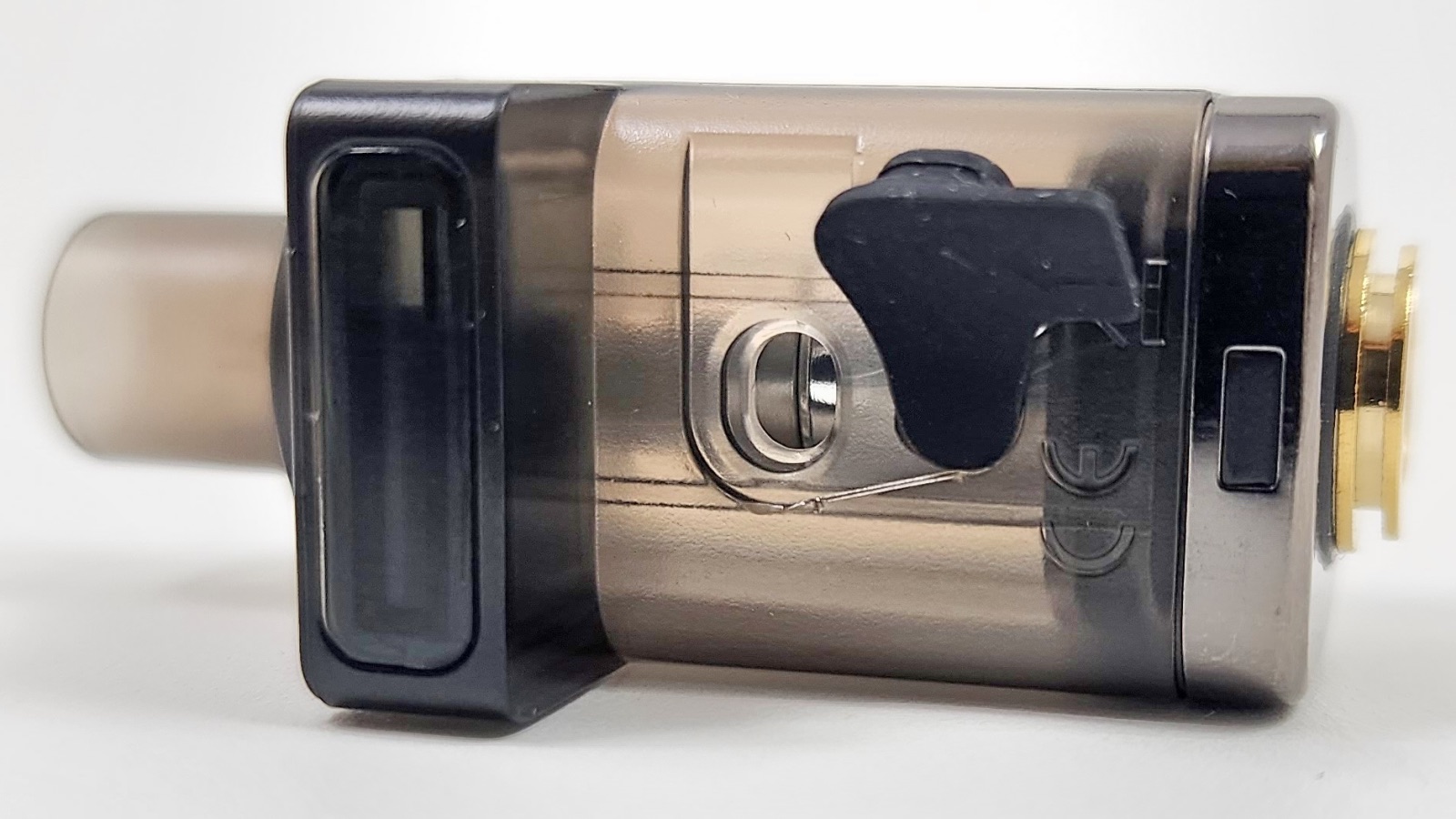 The coils press fit into the bottom of the cartridge. You’ll need to screw the coil base onto each coil, or they won’t seal, so make sure you don’t lose that little piece or accidentally throw it away with your coil. 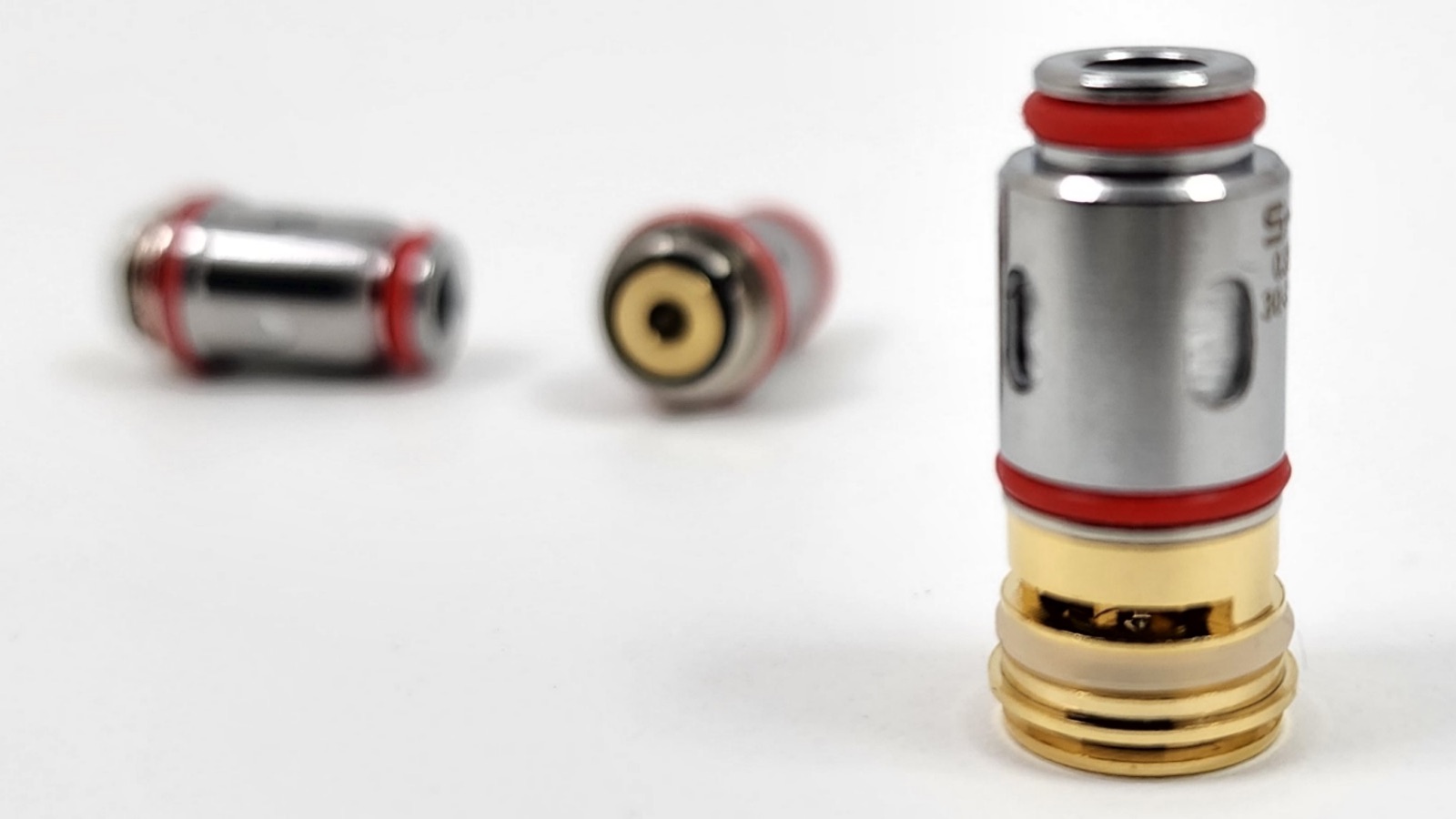 So as I mentioned, there are seven coils to pick from that are compatible with the Knight 40; the S-1 through the S-6 coils, and an RBA coil head. 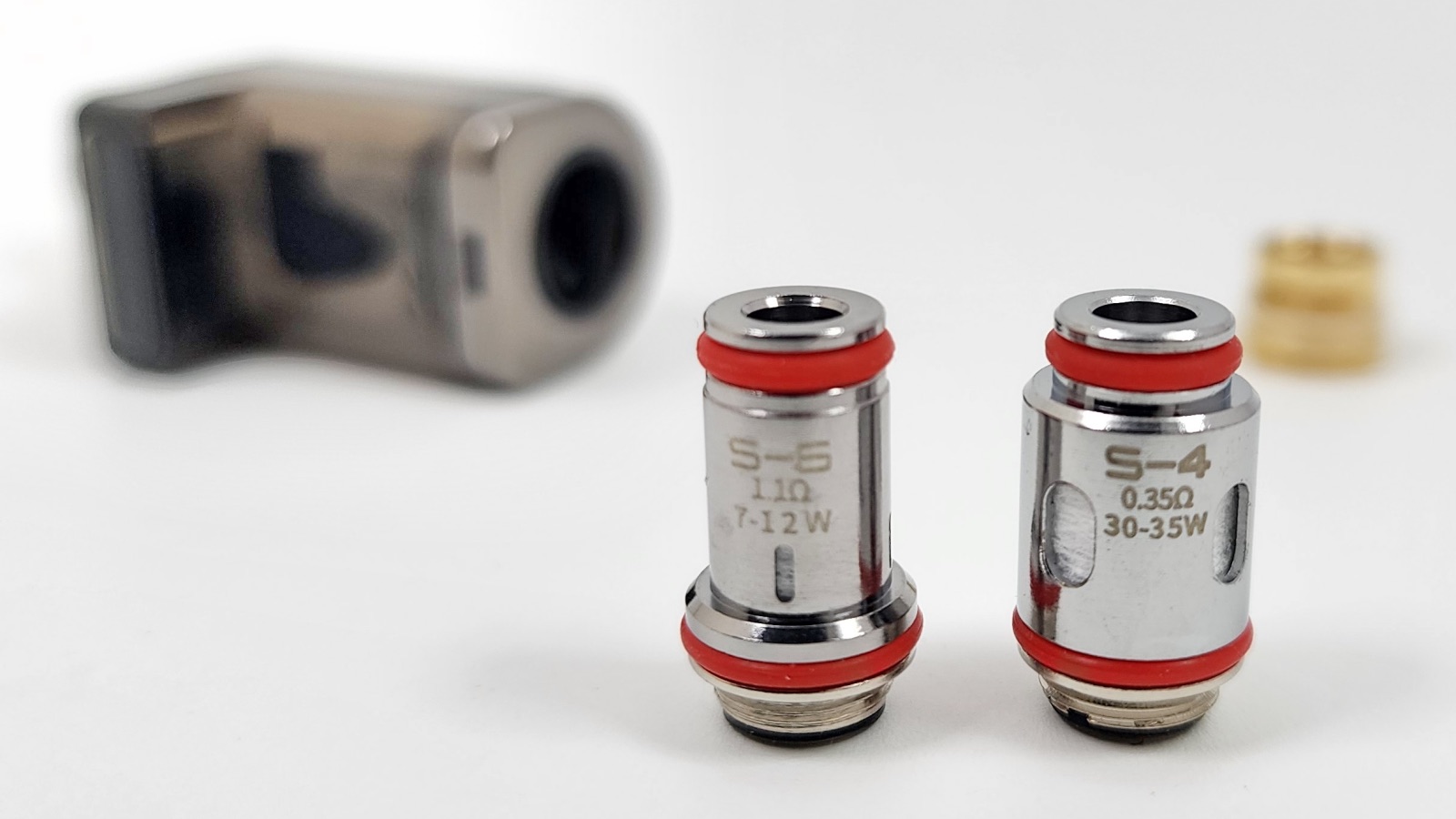 S-4 – This coil has a resistance of 0.35 Ohm and has a suggested wattage range of 30-35 watts. This is a direct lung coil designed for bigger clouds.

S-6 1.1 Ohm – This coil has a resistance of 1.1 Ohm and a suggested wattage range of 7-12 watts. This is a mouth-to-lung coil designed for a tight draw. This is what you’d usually use for higher nicotine e-liquid. 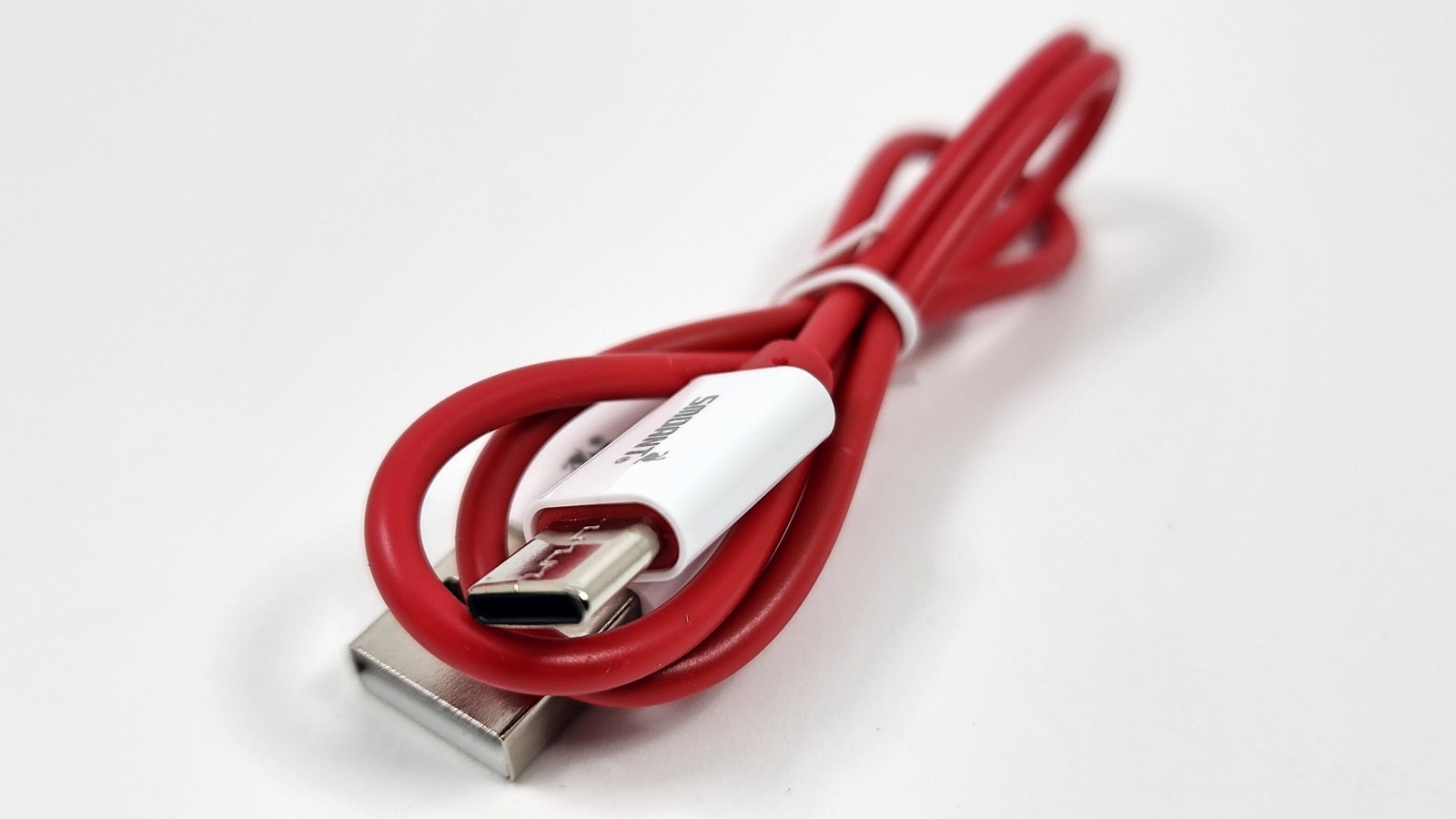 The Knight 40 has a 1,500 mAh internal battery. It’s a good-sized battery. It charges at 5 volts and 1 amp, so that’s not as good as a 2amp charge, but not terrible either. It’ll take about 1.5 to 2 hours to charge from a fully dead battery.

There are some protections on the chip too: 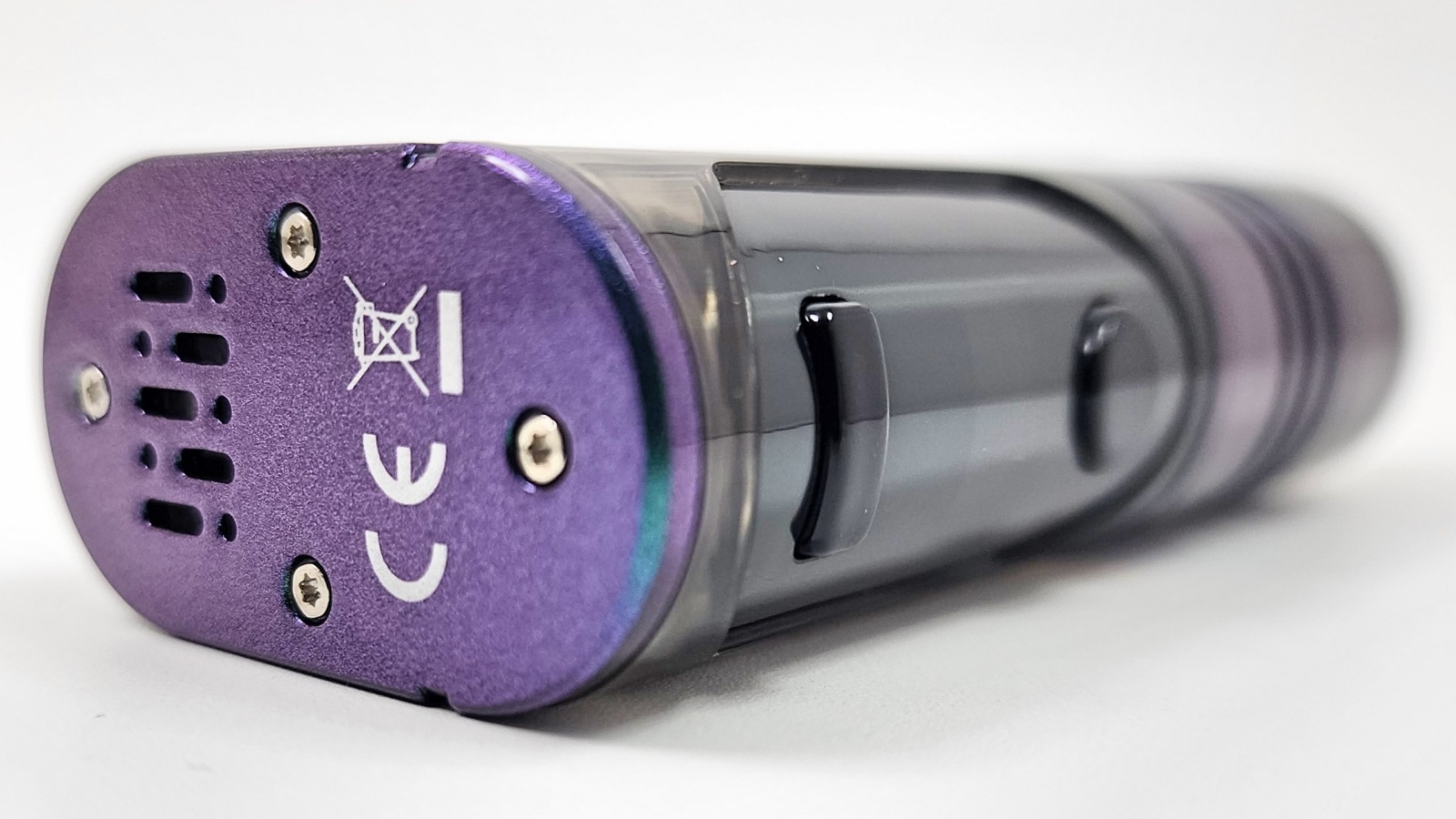 I think the Knight 40 is a great pod kit. I love the way it looks, it feels great in my hand, and it performs well. I like the auto-wattage setting feature and how it shows the suggested wattage ranges on the screen when you put a coil in. The adjustable airflow works great, and the flavor is good too. There are a couple of things I think could be improved, such as the screen quality, placement of the firing button, and 2 amp charging instead of 1 amp. And the crooked screen is a bummer. But none of these things would be a deal breaker for me because I like how the Knight 40 looks and performs.

The Knight 40 pod vape kit was sent to me for review from Smoant.