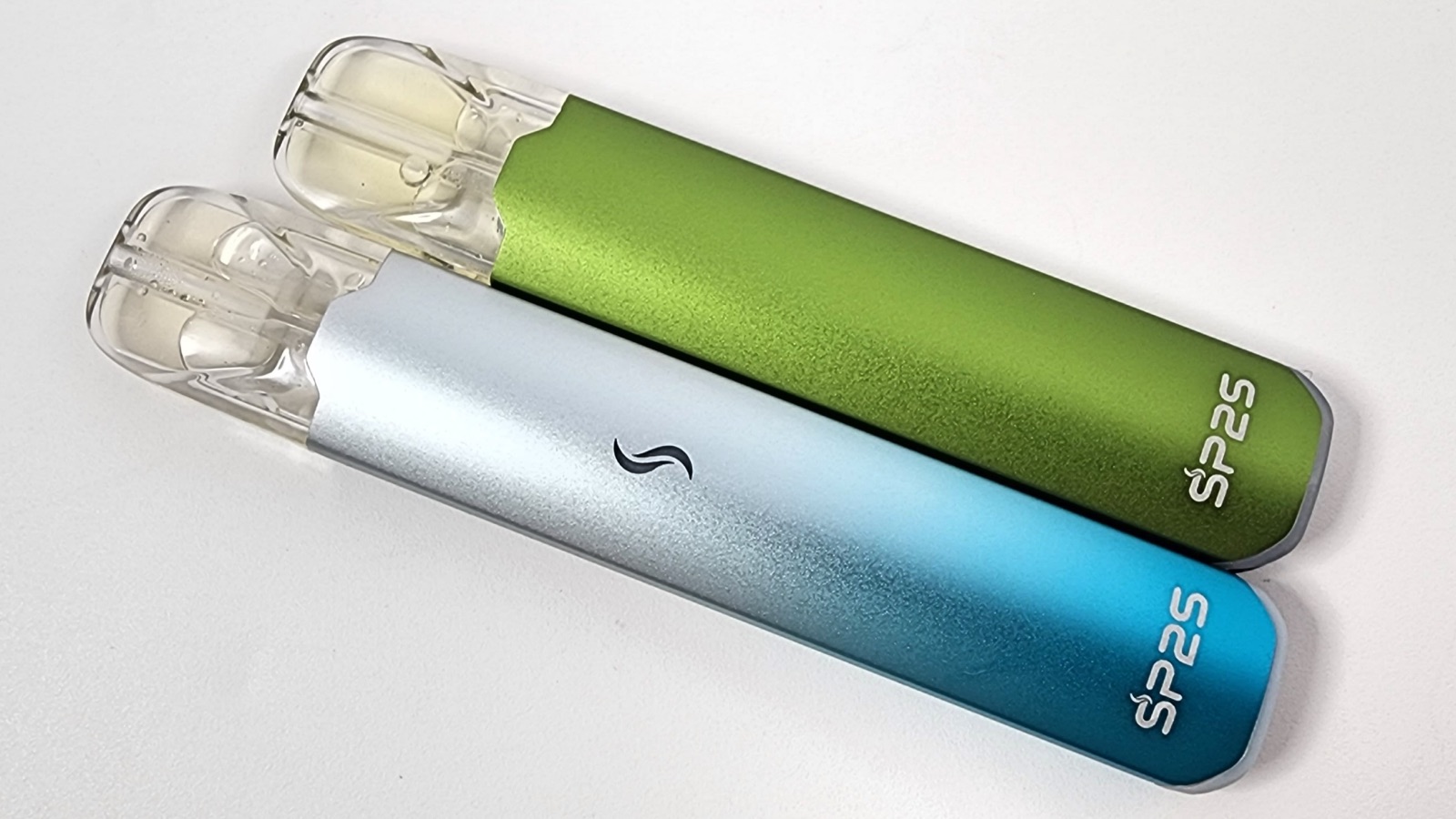 These products were sent to me for review from SP2S. SP2S is relatively unknown in the U.S. and the U.K. but they tell me they’re famous in China and Southeast Asia where they have more than 350 shops spread out across the region. They’re trying to expand their international market so they’re getting their products into the hands of reviewers like me. So it’s likely you’ll start to hear more about this brand soon.

I’m looking at both the SP2S Star and Star Mini in this review because they’re similar and both use the same pods. 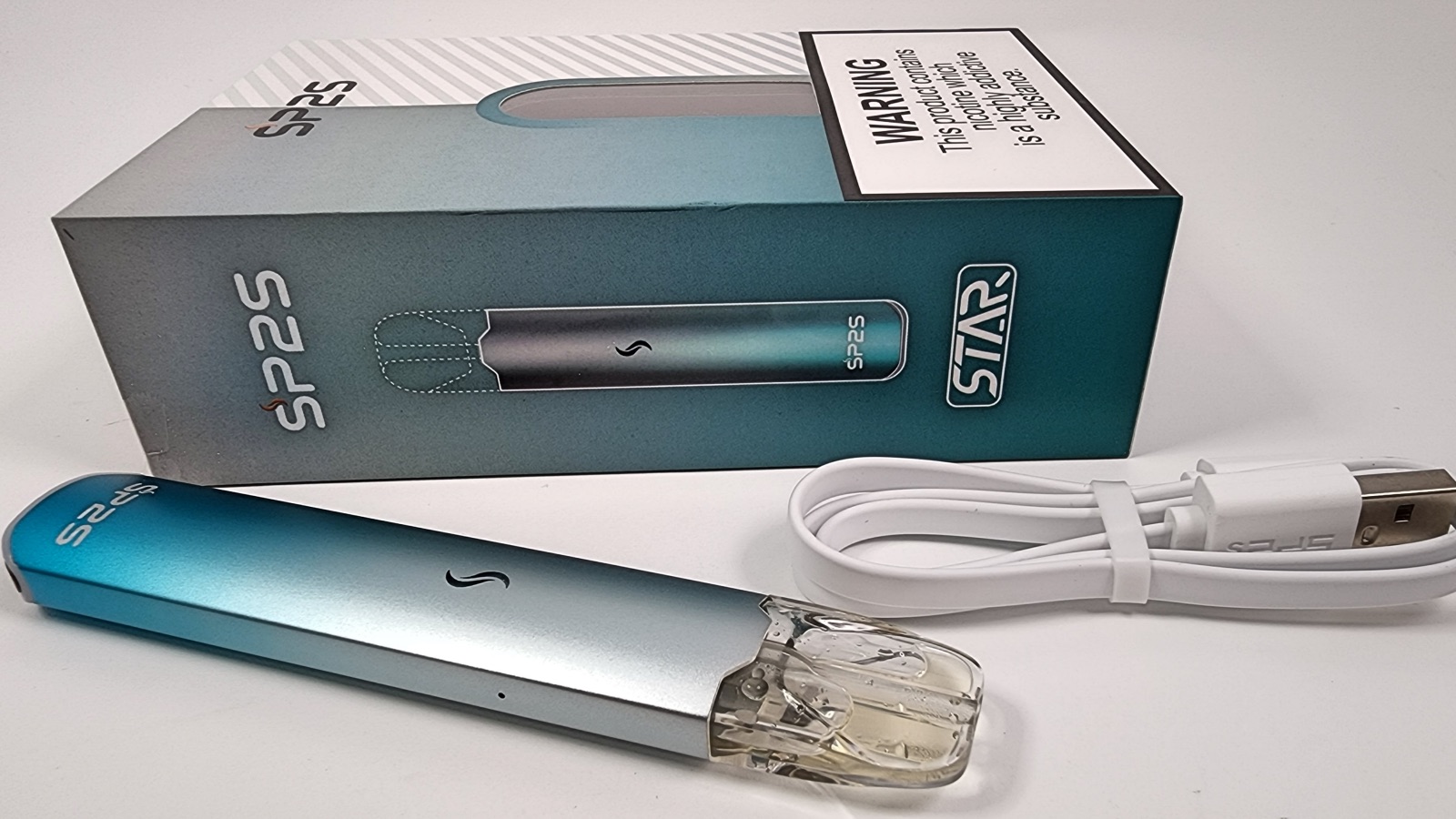 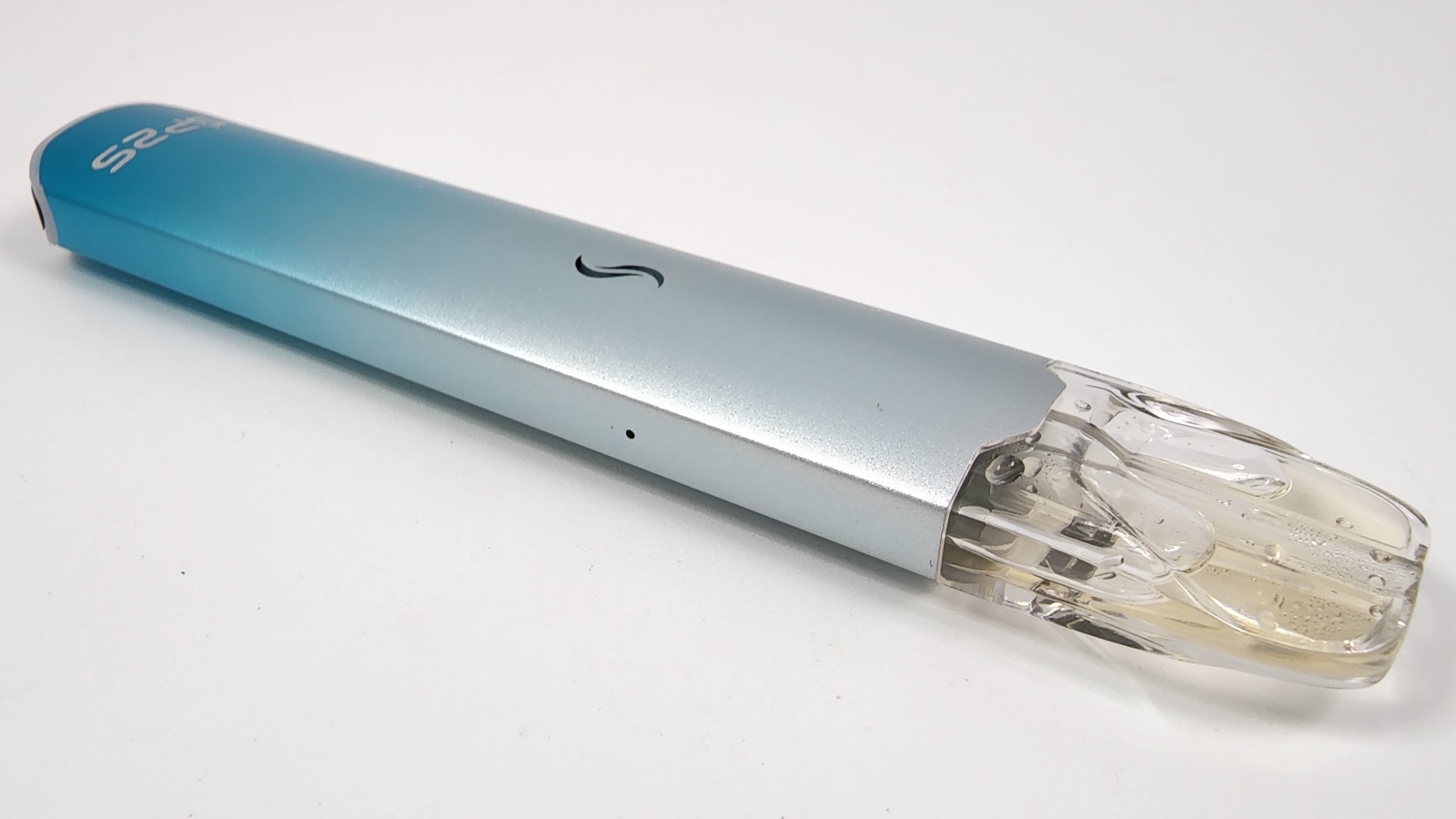 It’s a stick-style device with a pod insert at the top, two small airflow intakes on the sides, an LED light on the front that they call a breathing light, and at the bottom is another LED light and a USB-C charging port.

The colors are all pretty nice and it’s a good-looking device.

The Star has a unique vibration feature that does a couple of things. First, it vibrates when you plug a pod in so that’s great feedback to let you know that the pod is connected properly.

The Star also vibrates when you take 15 hits within 20 minutes. So this is an interesting feature designed for smokers trying to quit by switching to vaping, which SP2S is clearly going for if you read their packaging materials. 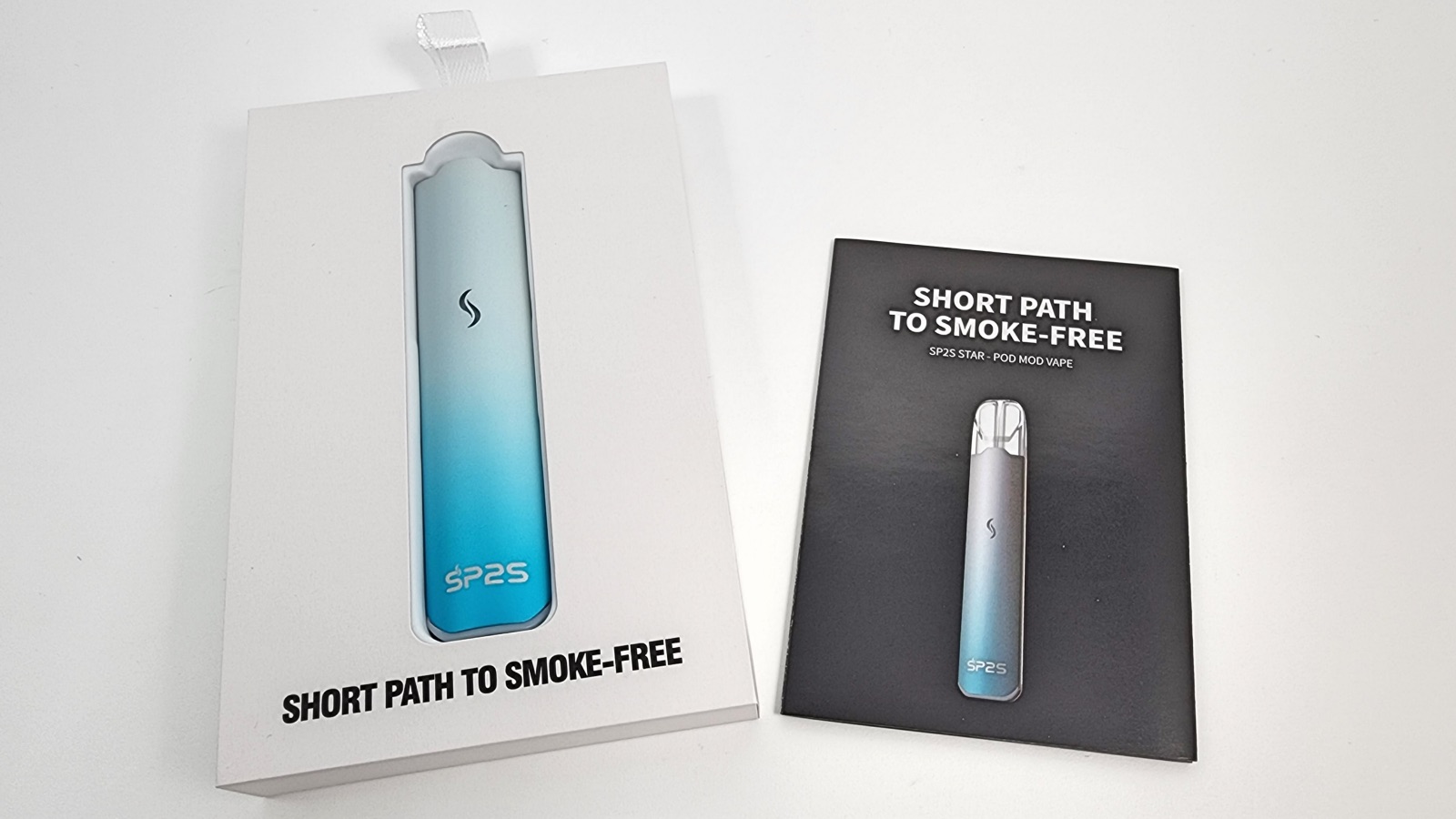 This vibration feature tells you that you’ve vaped about the equivalent of a cigarette. You can continue to vape after the vibration, though.

The SP2S Star Has Adjustable Wattage

Another really unique feature of this device is that you can adjust the wattage. I don’t know what the different wattages are but they call it high gear and low gear. To change gears, you take the pod out and back in three times within 3 seconds. When the device is in high gear, the breathing light will be green and when in low gear, the light will be white.

This is the first time I’ve ever seen a feature like this in a stick-style device. It’s a really cool workaround for a device that doesn’t have any buttons. 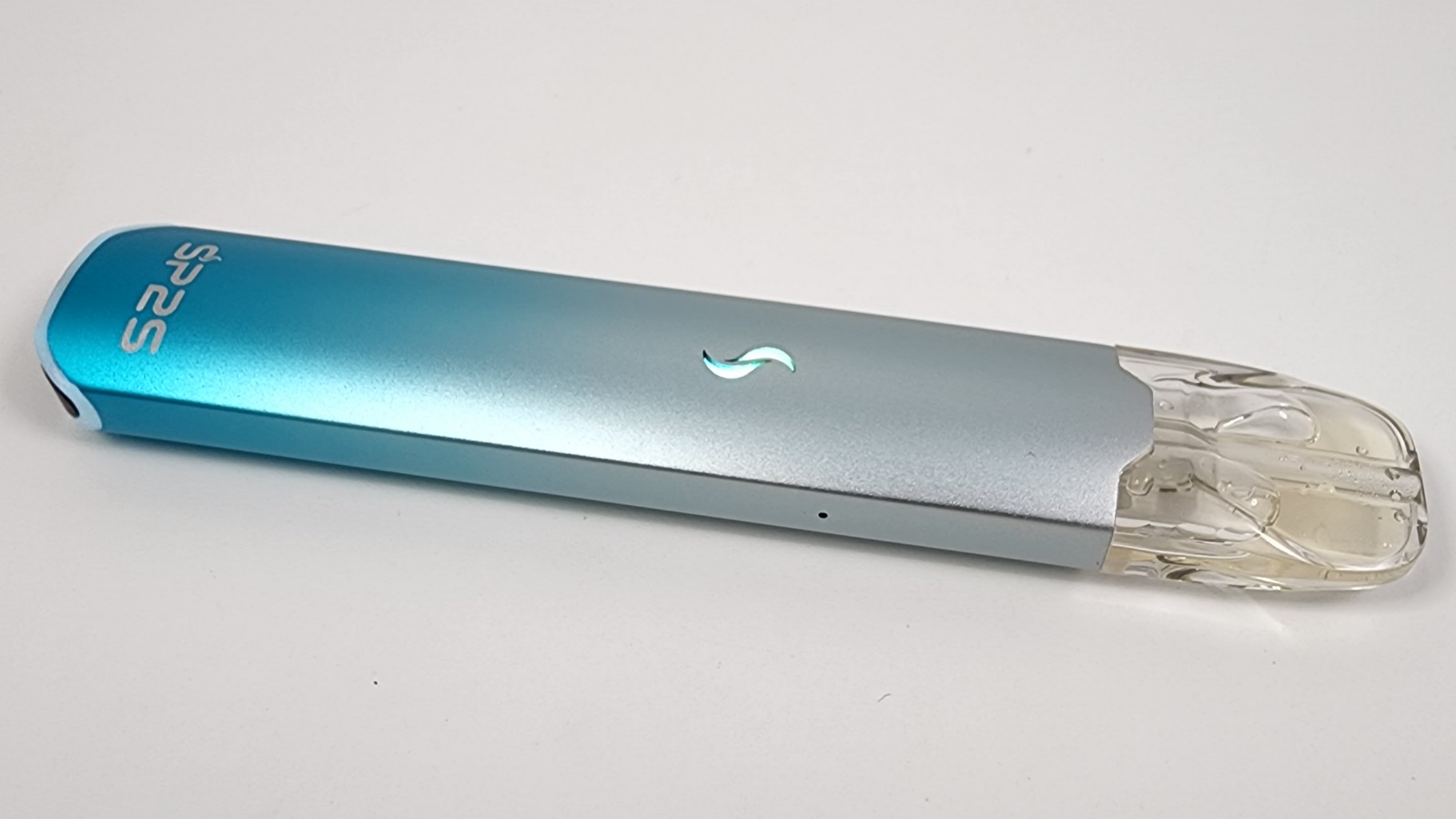 When you plug in a pod and also while you’re vaping, the LED light will shine white. 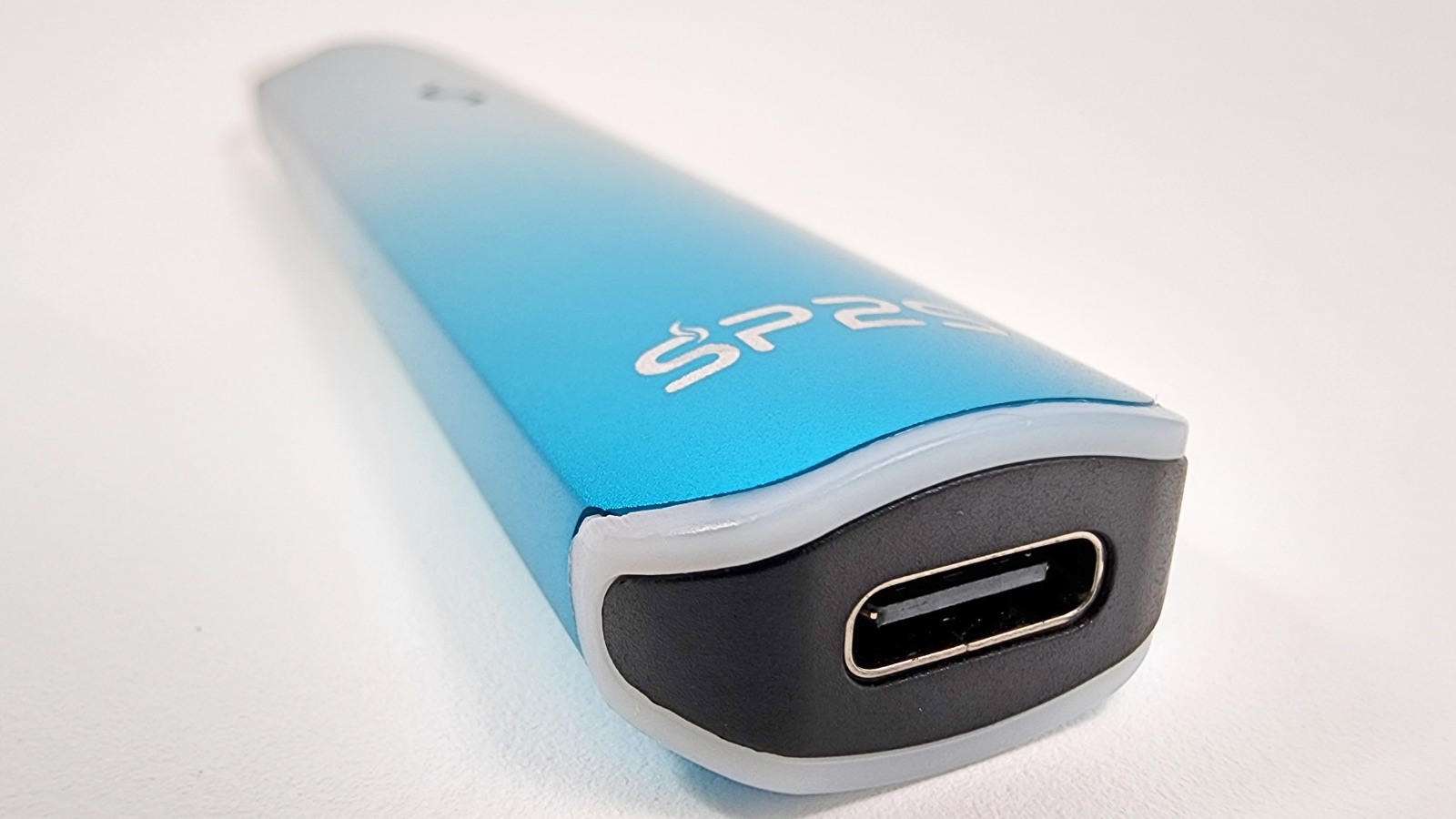 The internal battery is a 400mAh battery. It’s a little small but should get you through the day. It charges using USB-C and should fully charge in about 30 minutes. 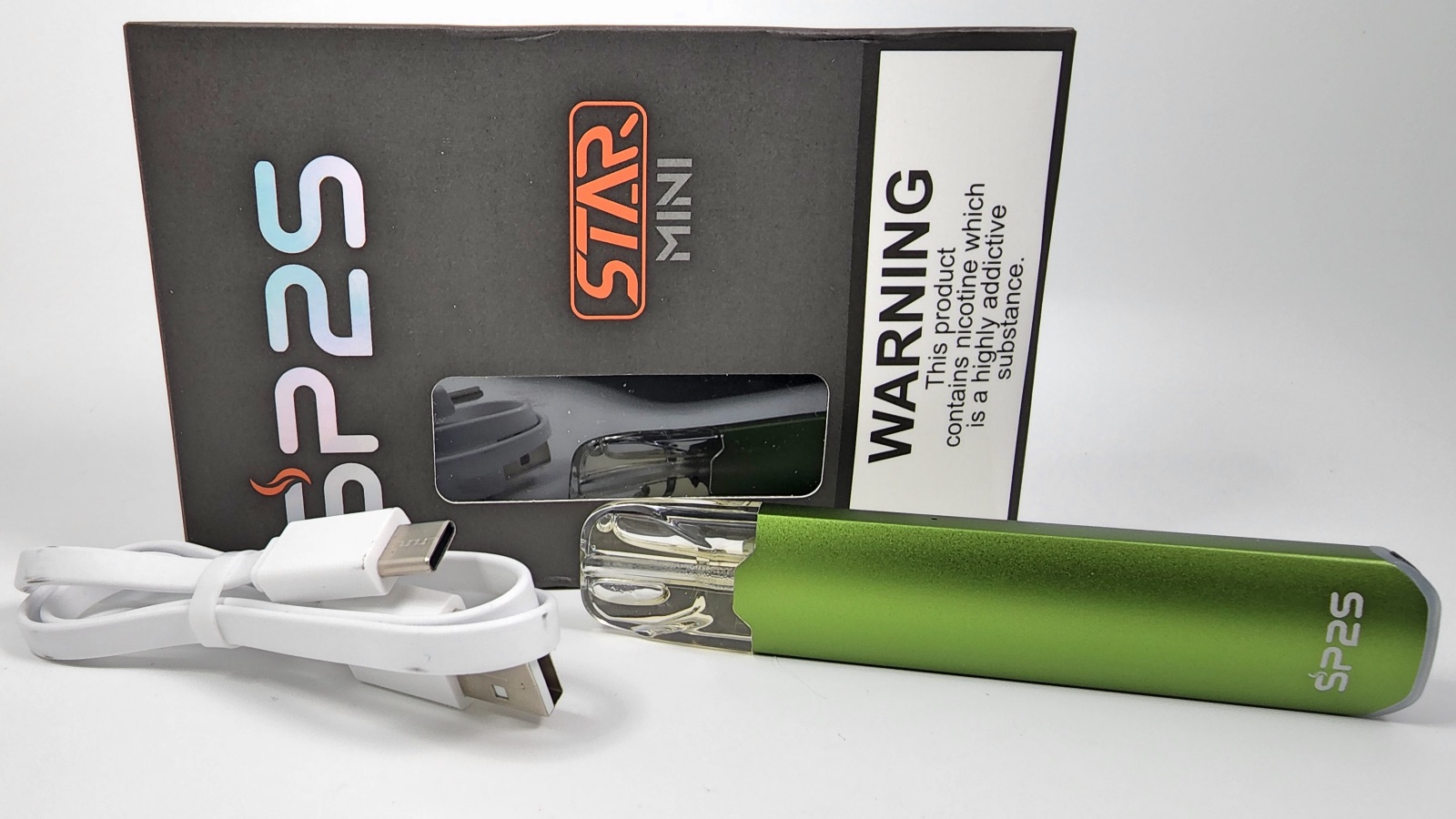 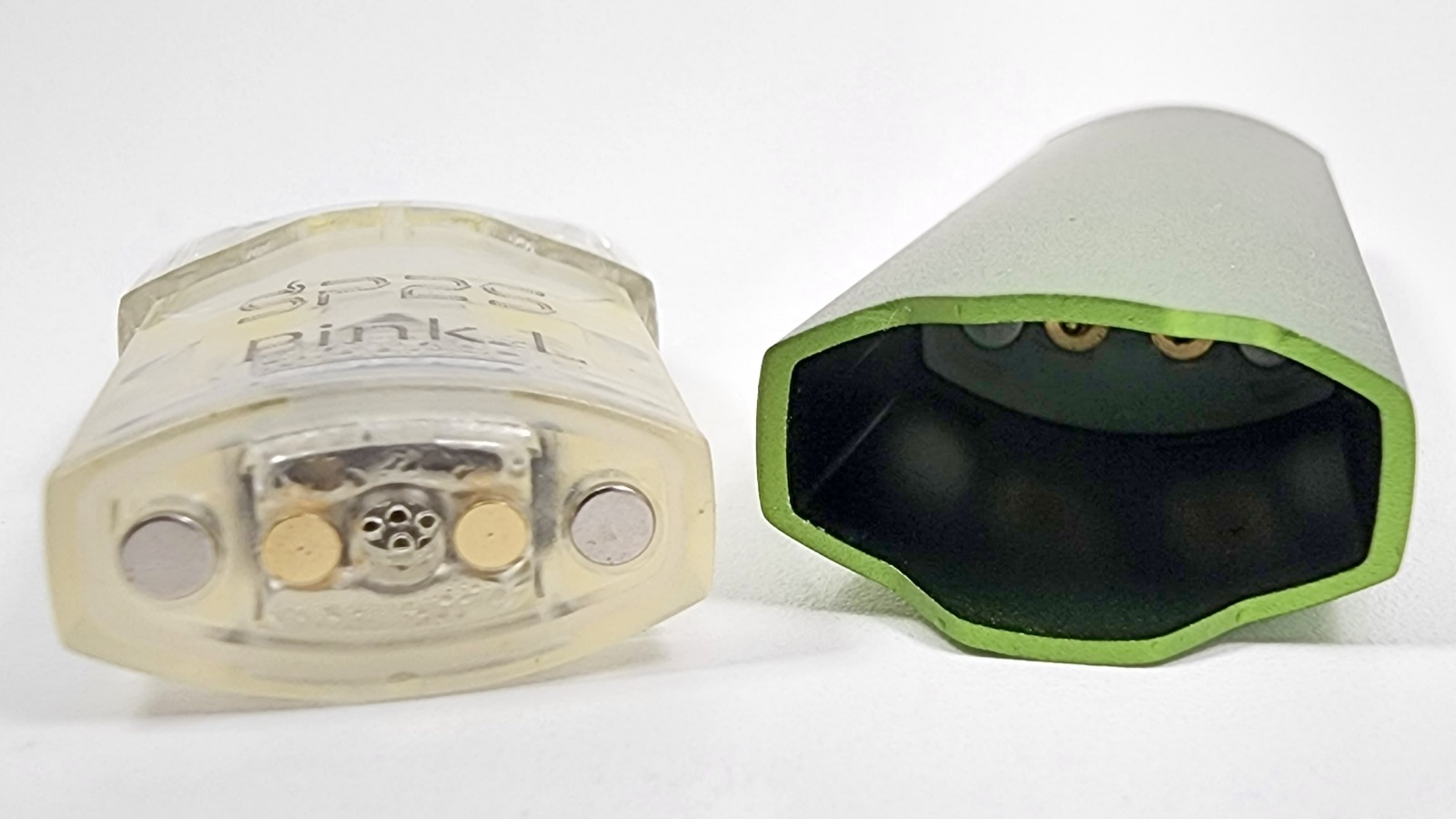 I don’t believe the Star Mini has been released yet, so I don’t have any information about its specs or model colors. They sent me an olive green model and I’ve also seen a pink version but that’s all I know. They have other similar devices in black and blue too so those will probably also be available for the Star Mini.

Since these use the same pods as the star, the dimensions of the mini are nearly identical. The only difference is that it’s shorter. 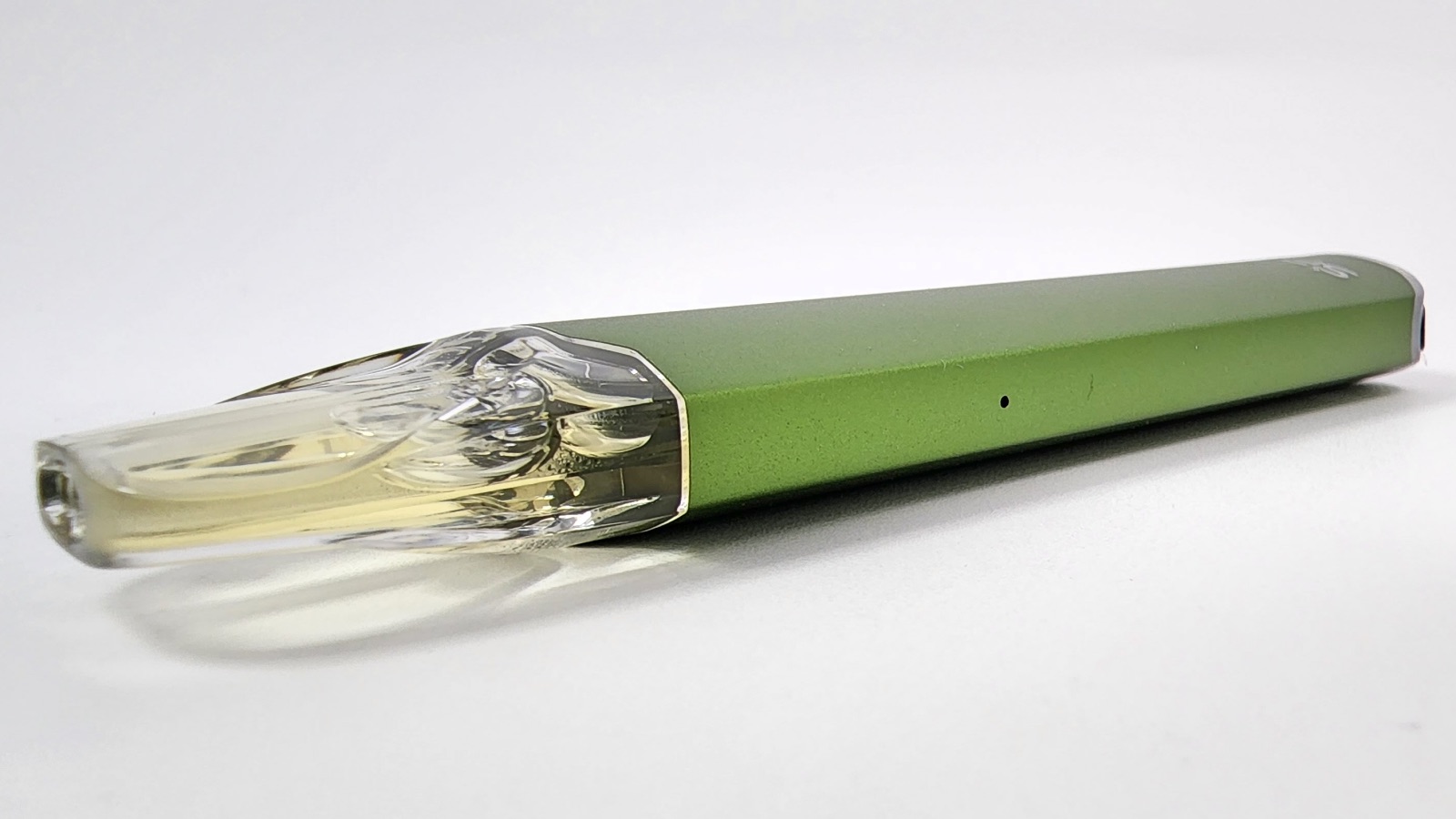 The Star Mini doesn’t have a breathing light, adjustable voltage, or vibration feedback, so this is a barebones version of the Star. It has an LED light around the charging port, though. 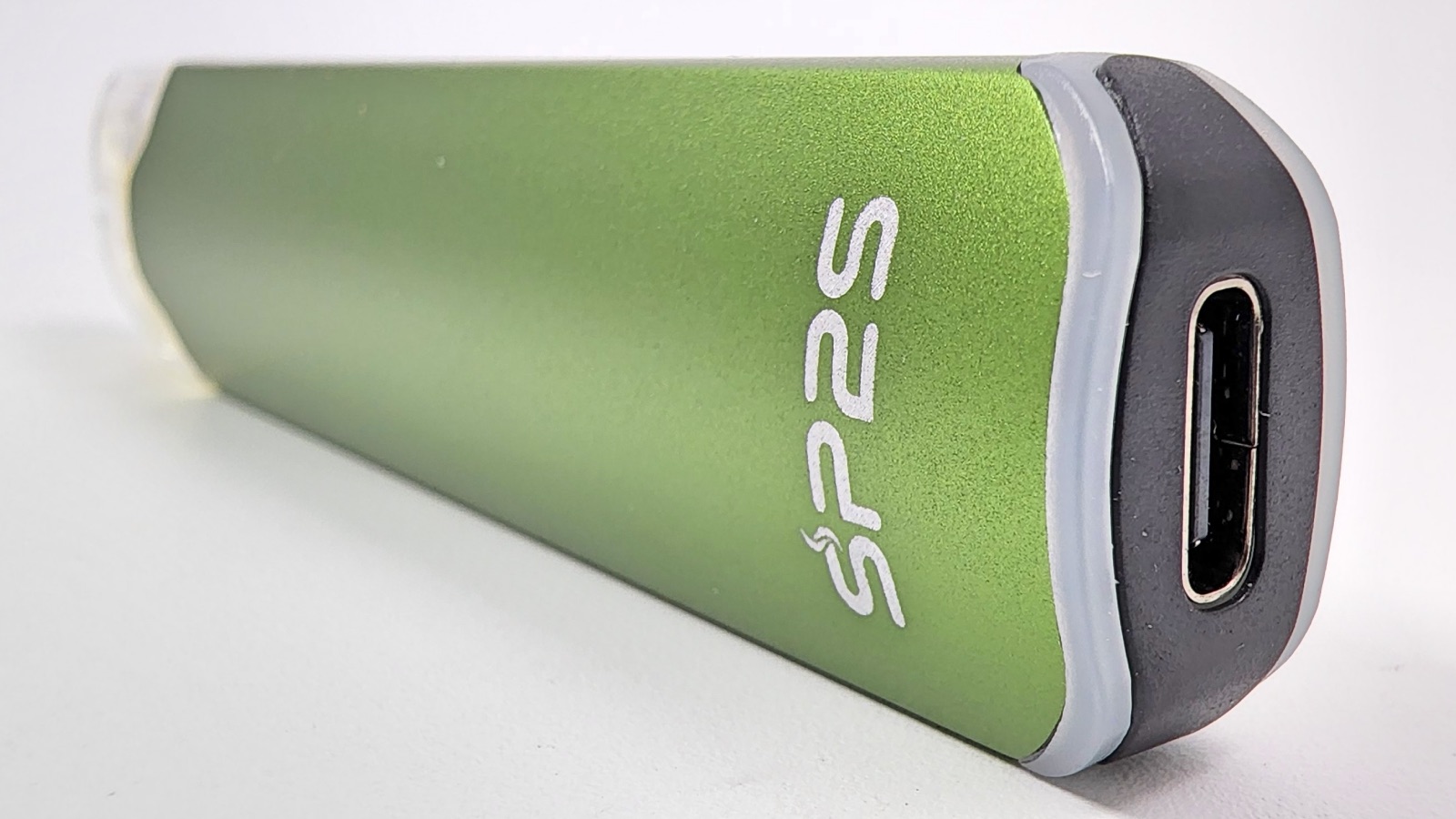 The battery inside the Star Mini is a 250mAh battery. That’s pretty small, so I’d expect that you’d need to charge it throughout the day. It charges using a USB-C cable, so at least it’ll charge pretty fast.

The Pods and Flavors For Both the Star and Star Mini 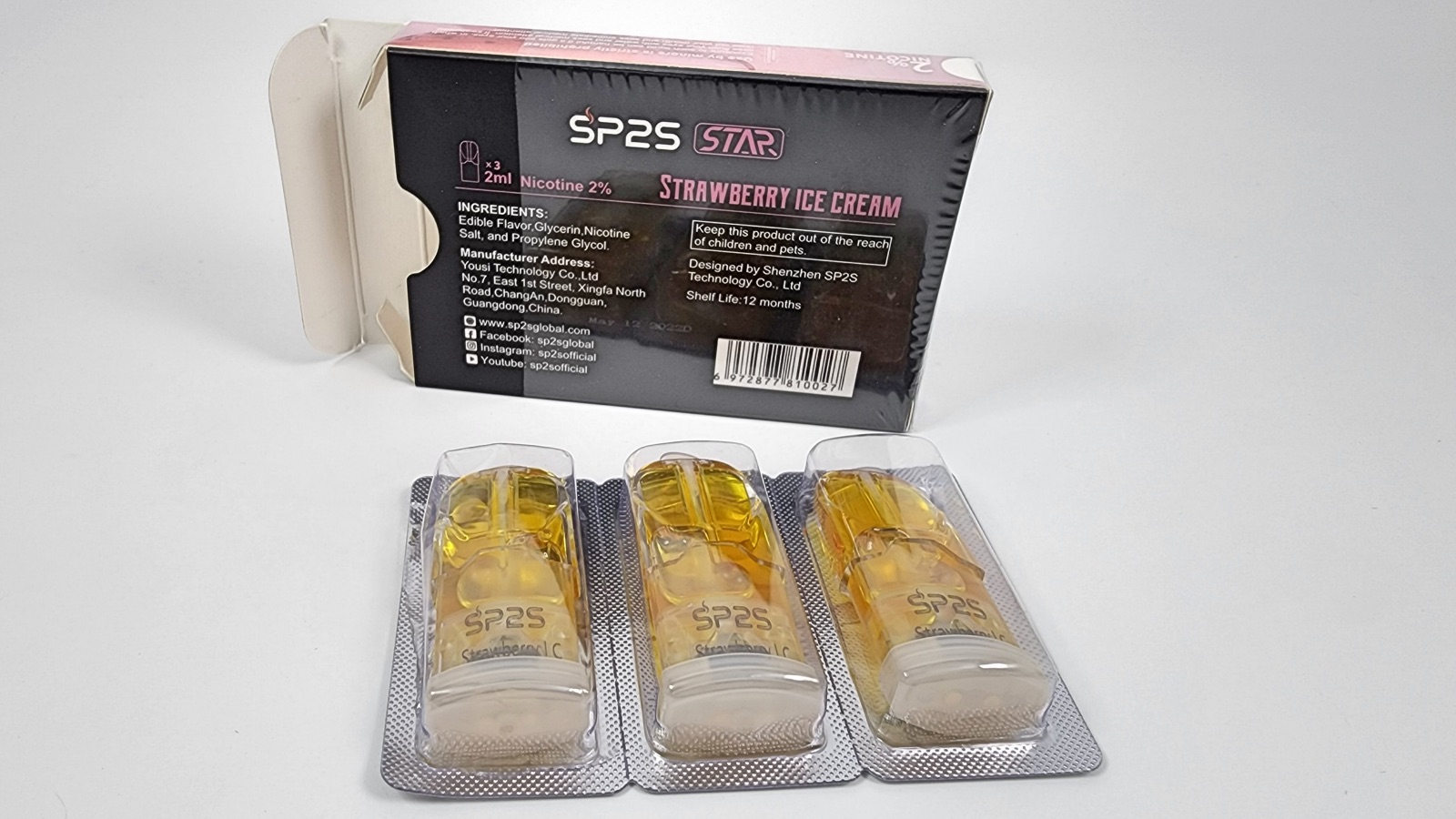 The pods come with 2ml of liquid, are available in either 2mg or 5mg nicotine, and have ceramic coils. They also come in packs of 3 pods.

SP2S has more than 30 flavors to pick from, so you have a ton of options. They sent me 15 of those flavors and I’ll go over each of them. 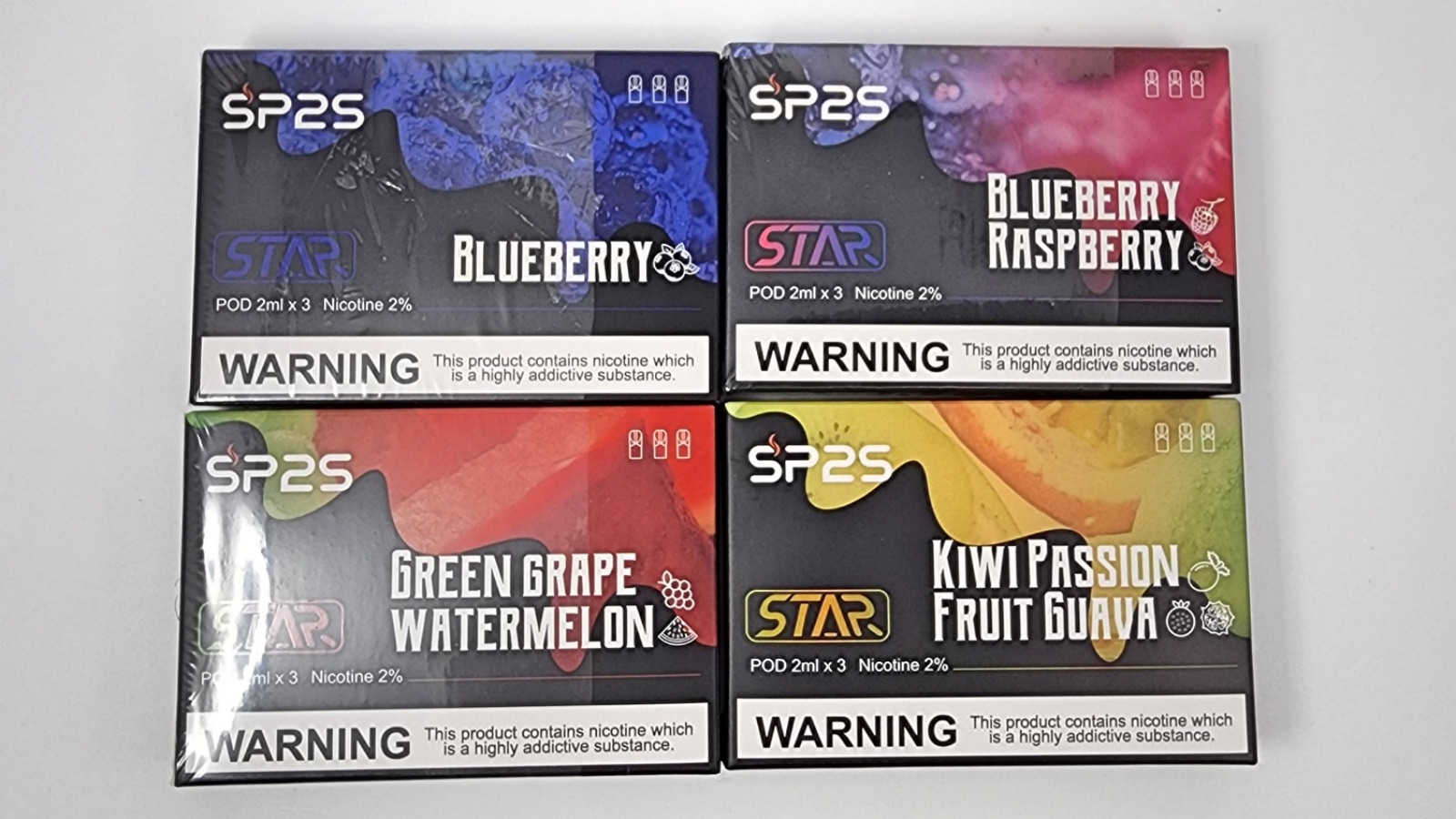 Blueberry – This is a mild but sweet and rich artificial blueberry.

Blueberry Raspberry – I get both blueberry and raspberry here, but both are really light and low on sweetness, more like authentic berries. I personally would have liked more sweetener in this one.

Green Grape Watermelon – It’s hard to get a green grape flavor which is probably why most eliquids taste like grape candy or soda, but I can see what they were going for here. It’s like a light earthy, and slightly sweet grape mixed with watermelon. It’s really interesting and good. 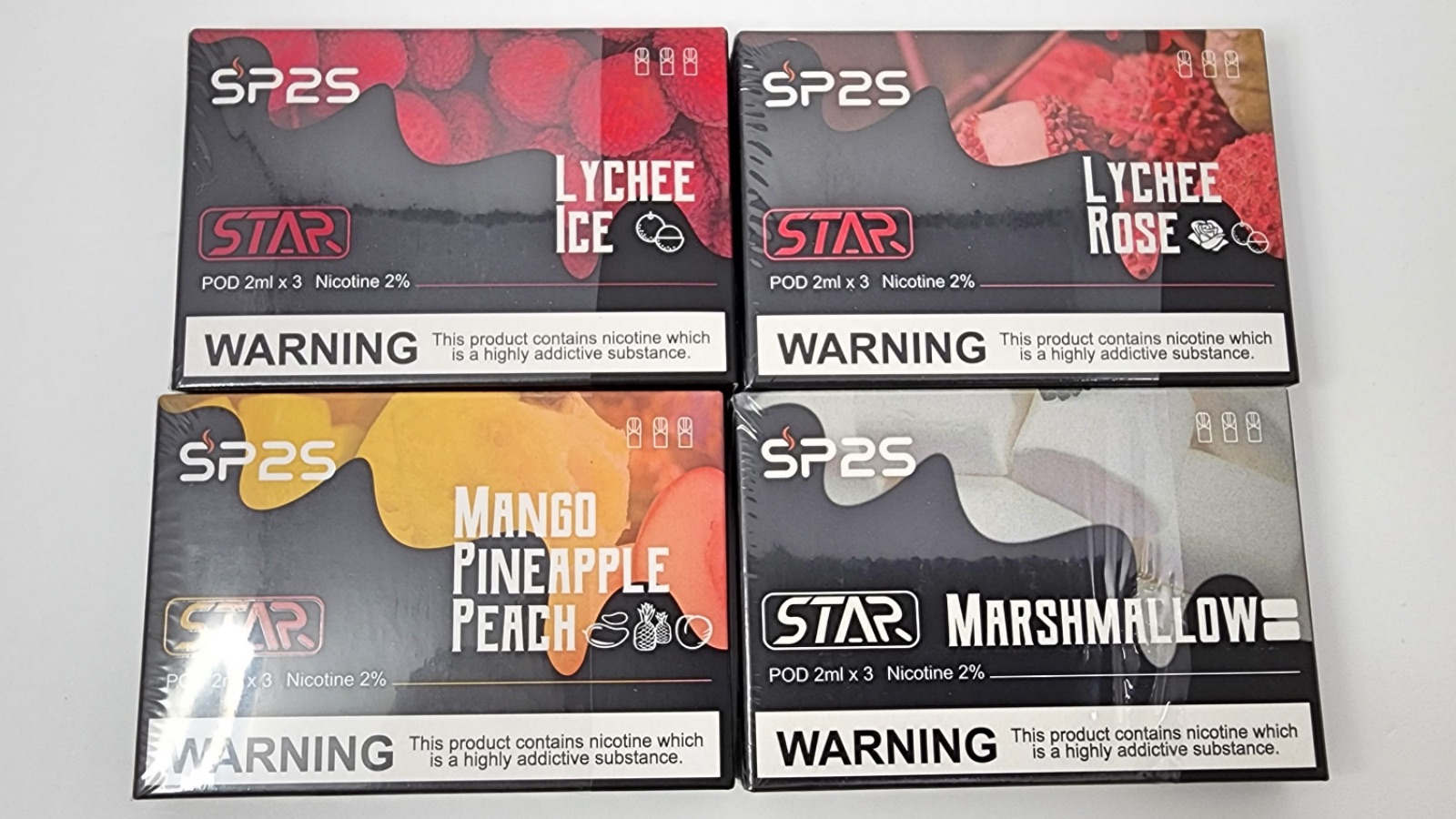 Lychee Ice – This one is straight-up lychee with a little ice. It’s not really sweet, just a lychee.

Lychee Rose – This is a really good lychee and floral flavor and is much sweeter than the lychee ice. Both flavors in here come out pretty strong too, which I like.

Mango Pineapple Peach – This tastes mostly like sweet mango and pineapple up front and a little bit of peach at the end. The flavor overall is pretty light.

Marshmallow – It doesn’t taste like regular marshmallows to me but maybe those rainbow marshmallows. It’s hard to describe but it tastes like some sort of light sweet fruity flavor. 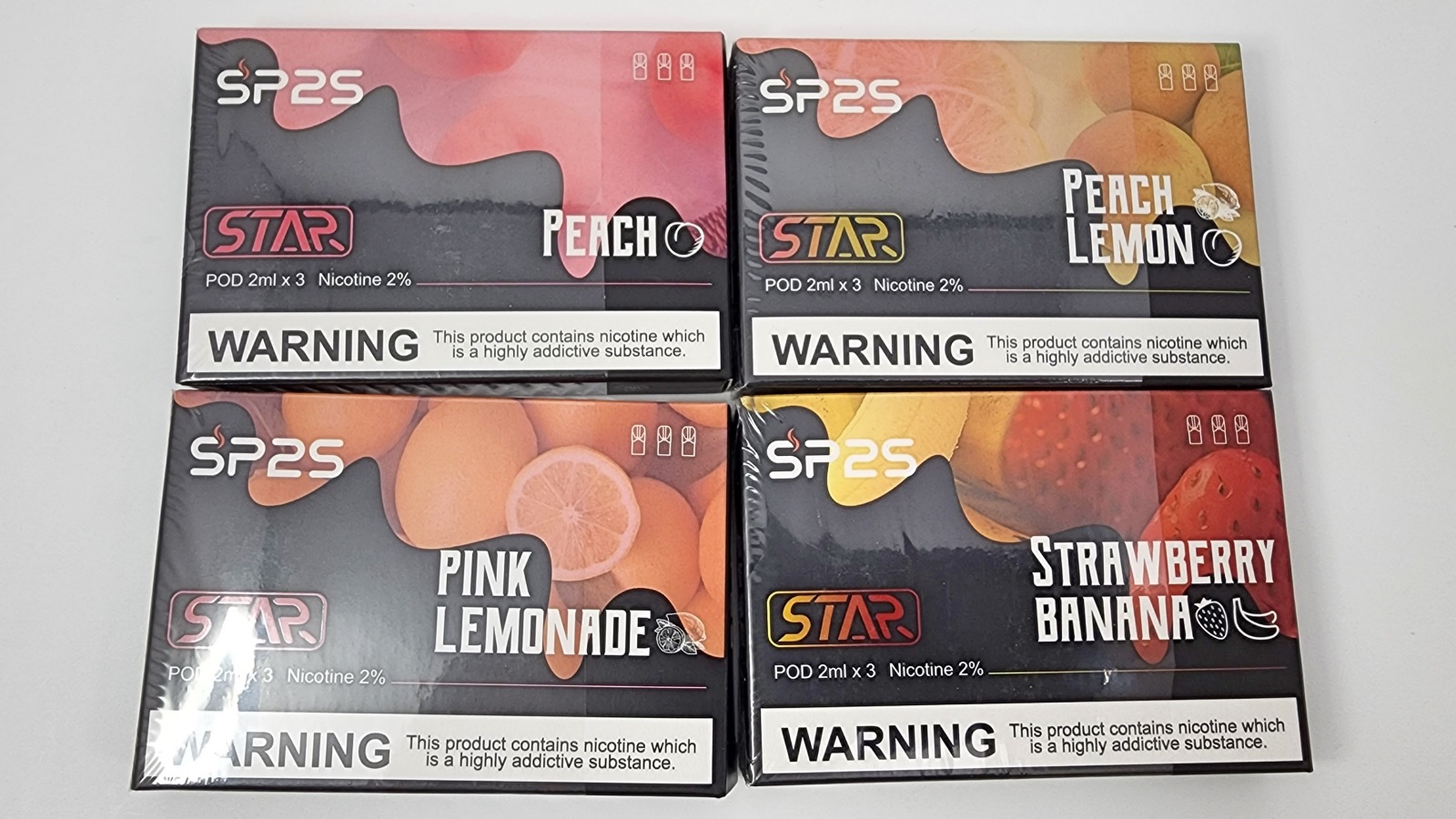 Peach – This is more of a candy-ish peach flavor but with the earthiness and lighter sweetness of a real peach.

Peach Lemon – The peach is light, and the lemon is strong. That lemon has the sour bitterness of a real lemon. It’s a nice combination of flavors.

Pink Lemonade – This is just like pink lemonade. Maybe a bit more floral, but it has the unique sour and saltiness that lemonade has. It’s pretty good.

Strawberry Banana – This is your average strawberry banana flavor. It’s sweet and good, but I would have liked the flavor to be a little stronger. 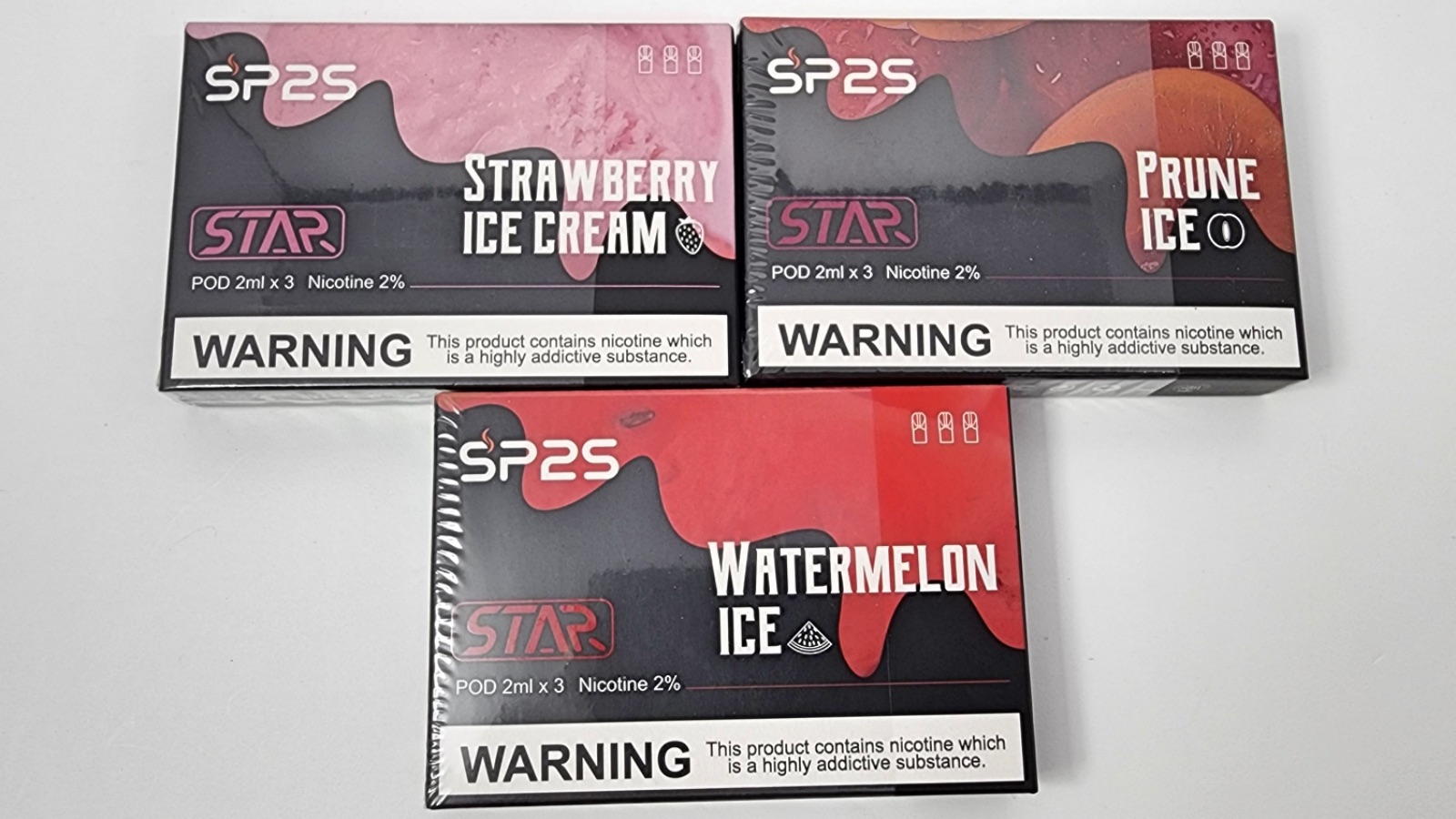 Strawberry Ice Cream – The strawberry is light, and the creaminess comes out well. The ice cream flavor here is really unique, and I like it. I think if the strawberry was stronger and sweeter, this would be close to a real strawberry ice cream.

Prune Ice – I’ve never seen a prune e-liquid before so this one is really interesting. It’s like prunes with a little ice.

Watermelon Ice – This is a sweet candy-ish watermelon with some light iced flavor added. It’s not a strong ice and I think it goes well with the watermelon. It’s refreshing.

That’s all of the flavors they sent me! I think they’re all pretty good. They actually make several of these in their disposable line, too and I’ve been able to compare the two versions, and I have to say that the disposables are much stronger and sweeter. The Star pods are still good but the flavor in most of them are light and mild.

I do have a couple of drawbacks to mention that I experienced while testing these pods.

I had one pod that was flooded out of the package, and I was getting a lot of liquid in my mouth. I vaped through it, though, and it went away after maybe 5-6 hits.

And I also had one pod that kept auto-firing on me right out of the package. My guess is that this is from a pod that also got a little flooded during shipping and maybe had an air pocket or something. So if that happens, you can just pull the pod out to stop it from firing. It only happened after taking a hit, so I don’t think it’s related to the device.

The Star is the way to go, in my opinion. It has a bigger battery, adjustable voltage, and vibration feedback. I really like it. But if you don’t care about features and you just want a device that vapes SP2S’s pods, the Star Mini is a good option. It has a smaller battery, but it’s also a smaller device.

I don’t know the prices for either of these devices, but I’d guess the Star Mini is cheaper. All in all, I think both of the devices work well, and all of the flavors they sent me were mild but really good.