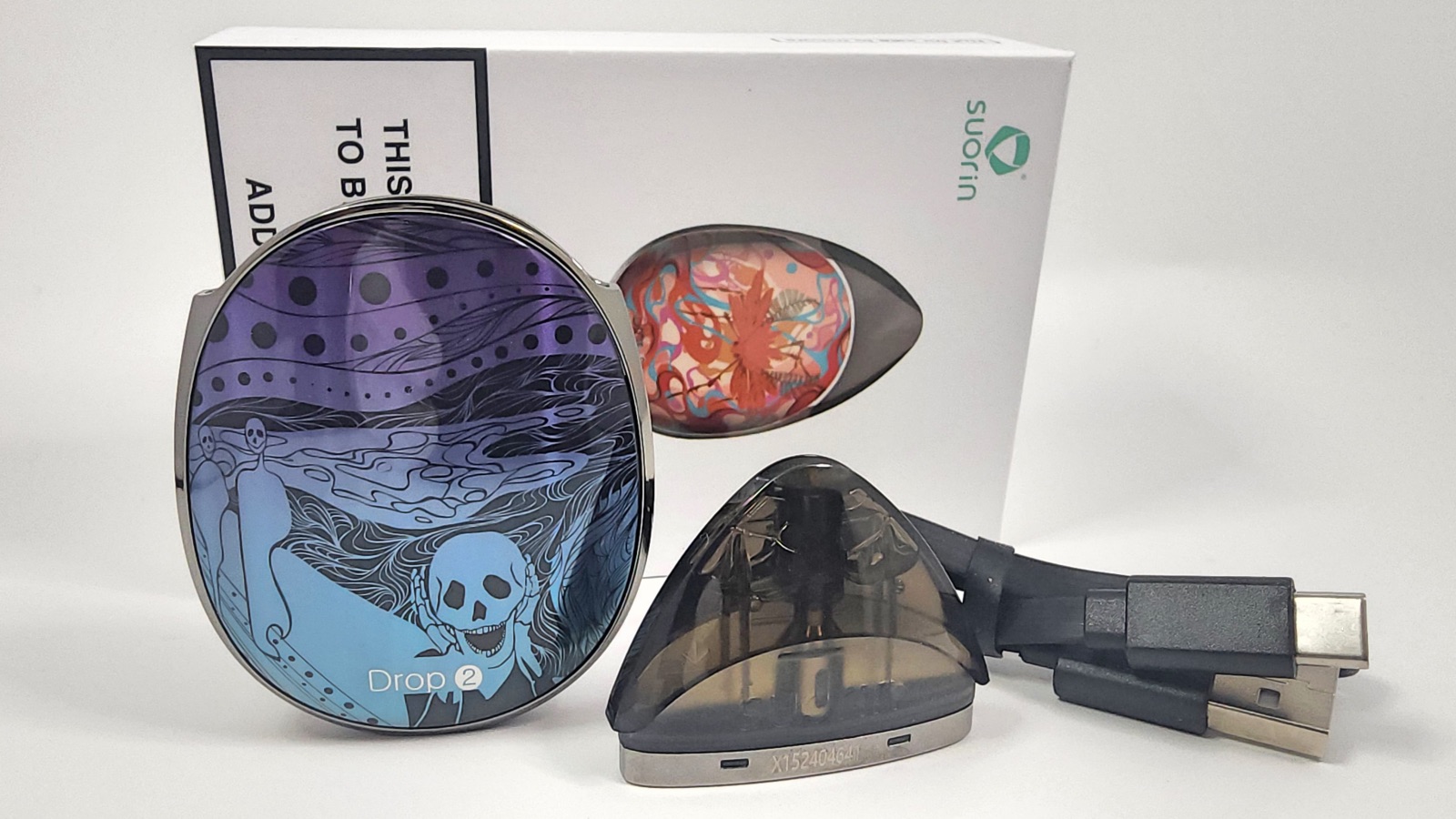 The Suorin Drop 2 was sent to me for review from YOUMEIT, the official direct sales store of Suorin, AIRBAR, and other popular vape brands. This is another great pod device from Sourin that’s small, looks great, and fits well in your pocket. 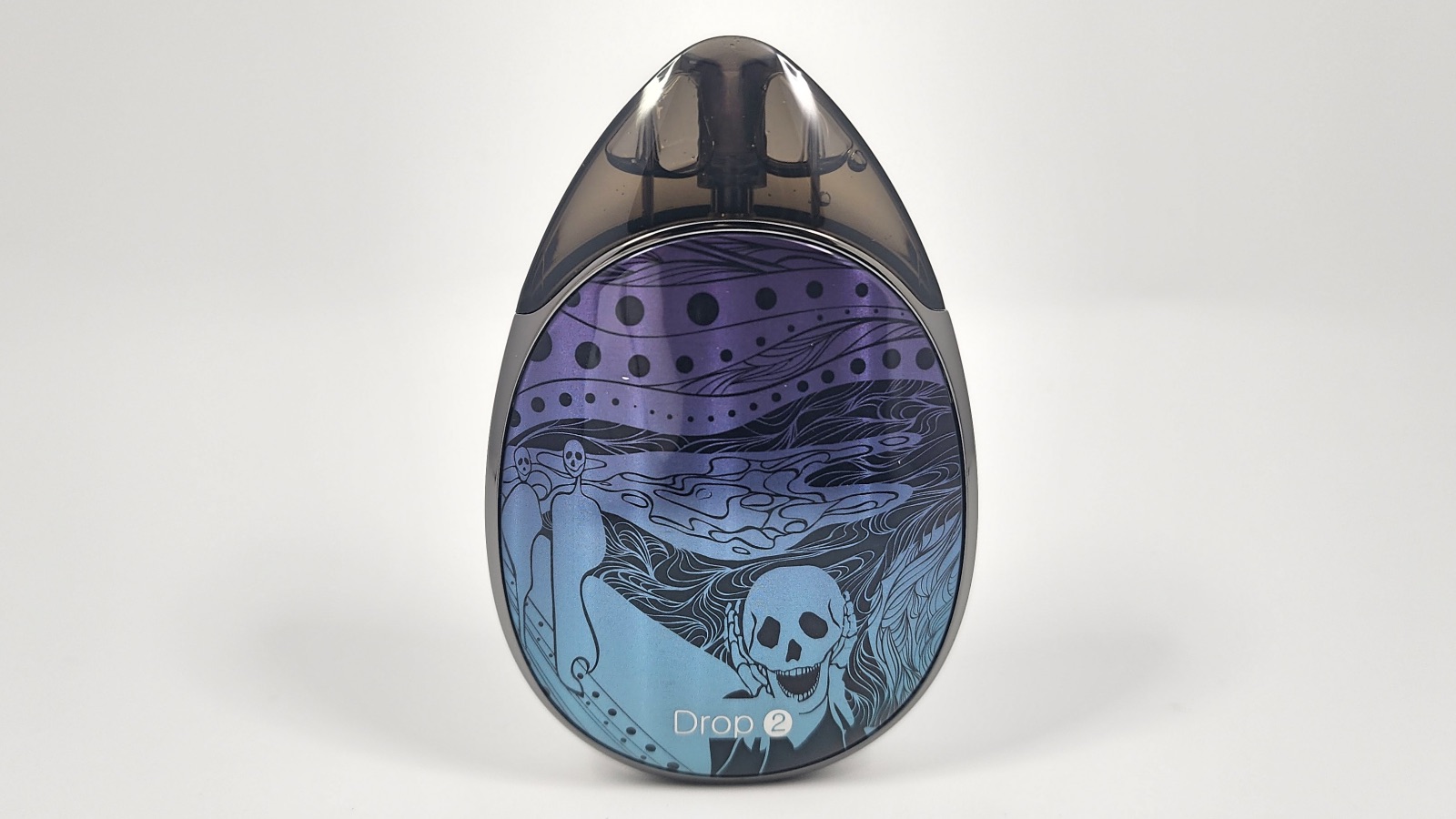 Suorin is known for putting out great pod devices with a flat profile and this one sticks to that theme. It’s a small device measuring 78.8mm (3 inches) tall, 52mm (2 inches) wide, and 17.6mm (0.6 inches) thick. The flatness of the device makes it great for carrying around. If you hate having stuff in your pockets, you’ll like the shape of the Drop 2.

It also looks great. It has a nice metal frame and really glossy design panels on both sides. Because of the glossiness, it’s a fingerprint magnet but that depends on the color you choose. I went with the darker-themed design featuring the artwork from the famous “The Scream” painting and I can’t really see the fingerprints but if you go with a solid color, you might notice it more. 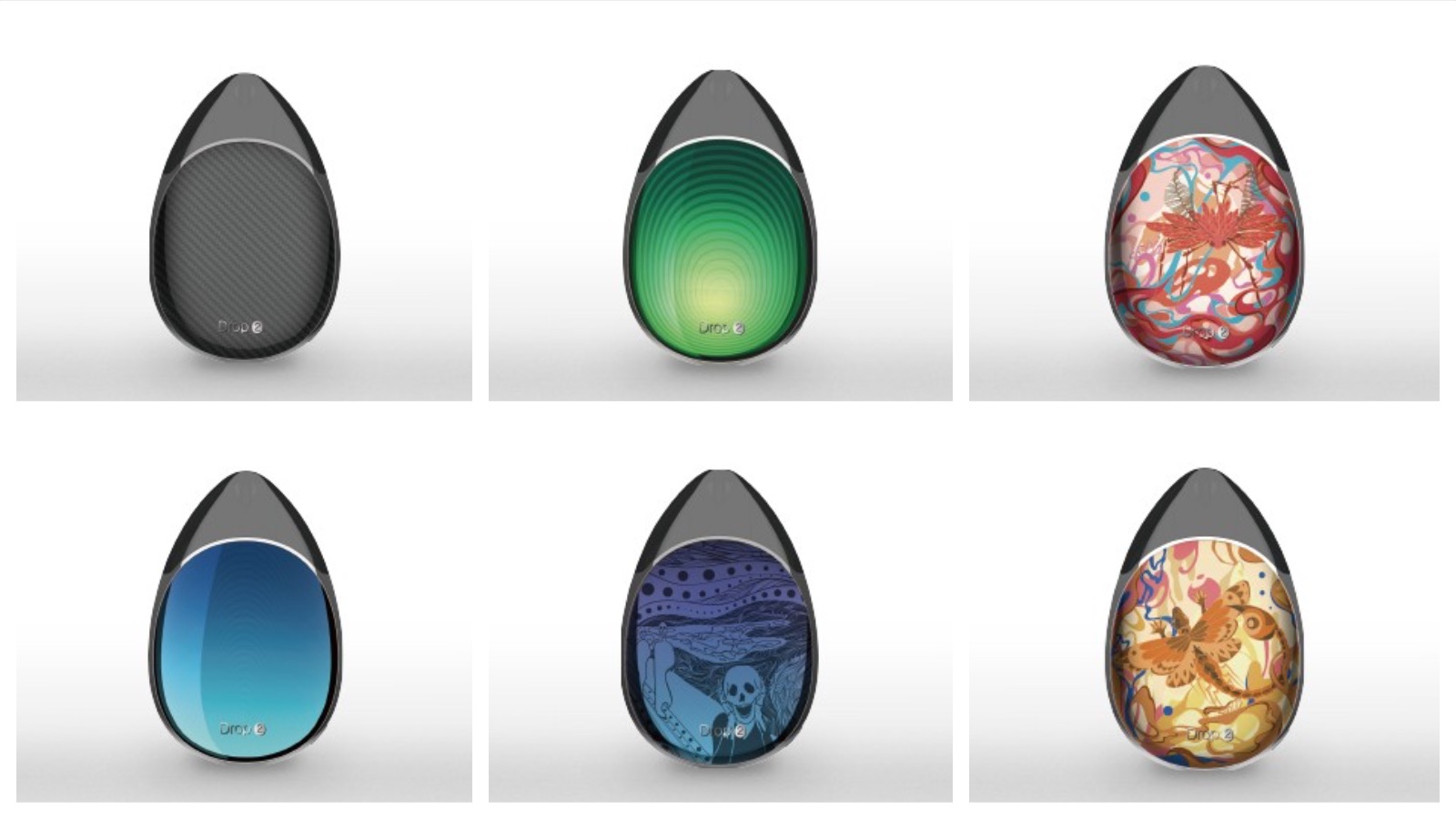 There are six colors to pick from; Black, Peacock Plume, Red Amber, Sky Blue, The Scream, and Yellow Amber.

The Drop 2 has an on and off button which is a nice feature that allows you to make sure it’s off while it’s in your pocket or bag if you prefer. Unlike the Air Pro, which I also recently reviewed, this button doesn’t fire the device, so it’s used only to turn the device on and off.

The device has a max of 14 watts and fires 1.0 Ohm coils. It’s not as powerful of a hit as the Air Pro and it’s noticeable when you compare the two but 14 watts is more the typical wattage you’d expect from a pod device. You’ll like the Air Pro if you like strong hits but if you want a lighter more calm hit, you’ll like this one. I think the draw is pretty satisfying.

The airflow comes in from the small airflow intakes on the side of the device. There’s one on each side. The airflow is a tight draw but very close to a loose mouth-to-lung so this will be for those of you who like that kind of draw. I like it but personally would have liked it just a little tighter. I like the draw better when I close both of the airflow intakes.

I do have another drawback with the airflow too. When the battery drains, you have to start taking a pretty strong hit to get a good draw. If you don’t hit it hard, you get intermittent issues with firing. But at full charge, it hits great. 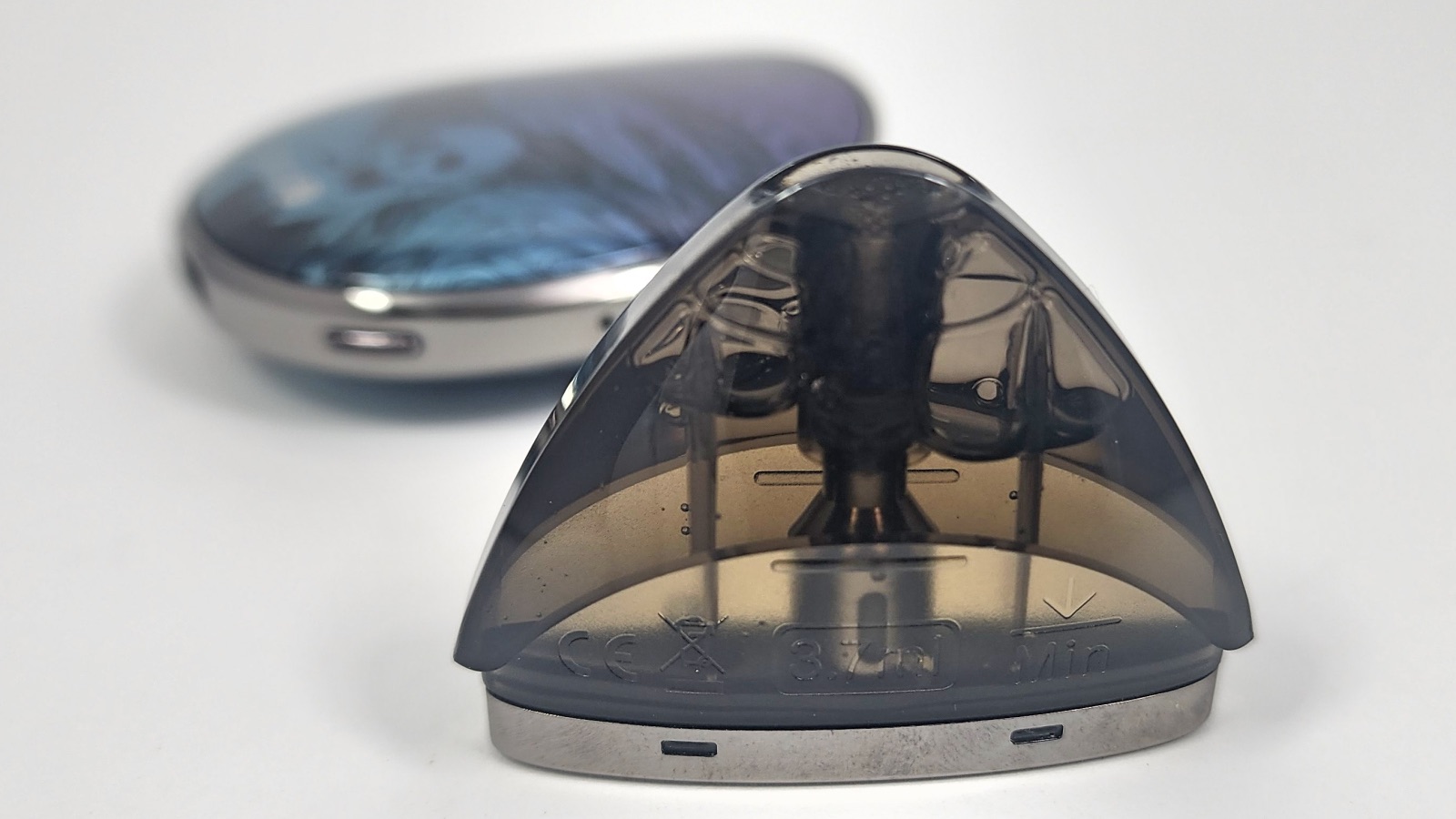 The pod holds 3.7ml which is more than a lot of other pod devices which tend to be somewhere around 2ml so it has a nice capacity. You fill the pod up at the bottom. You just lift a little flap to open it up and it’s easy to fill. The pod is held in place with magnets and holds strong. It’s even a little difficult to get out of the device. But at least you’ll know the pod won’t fall out in your pocket. 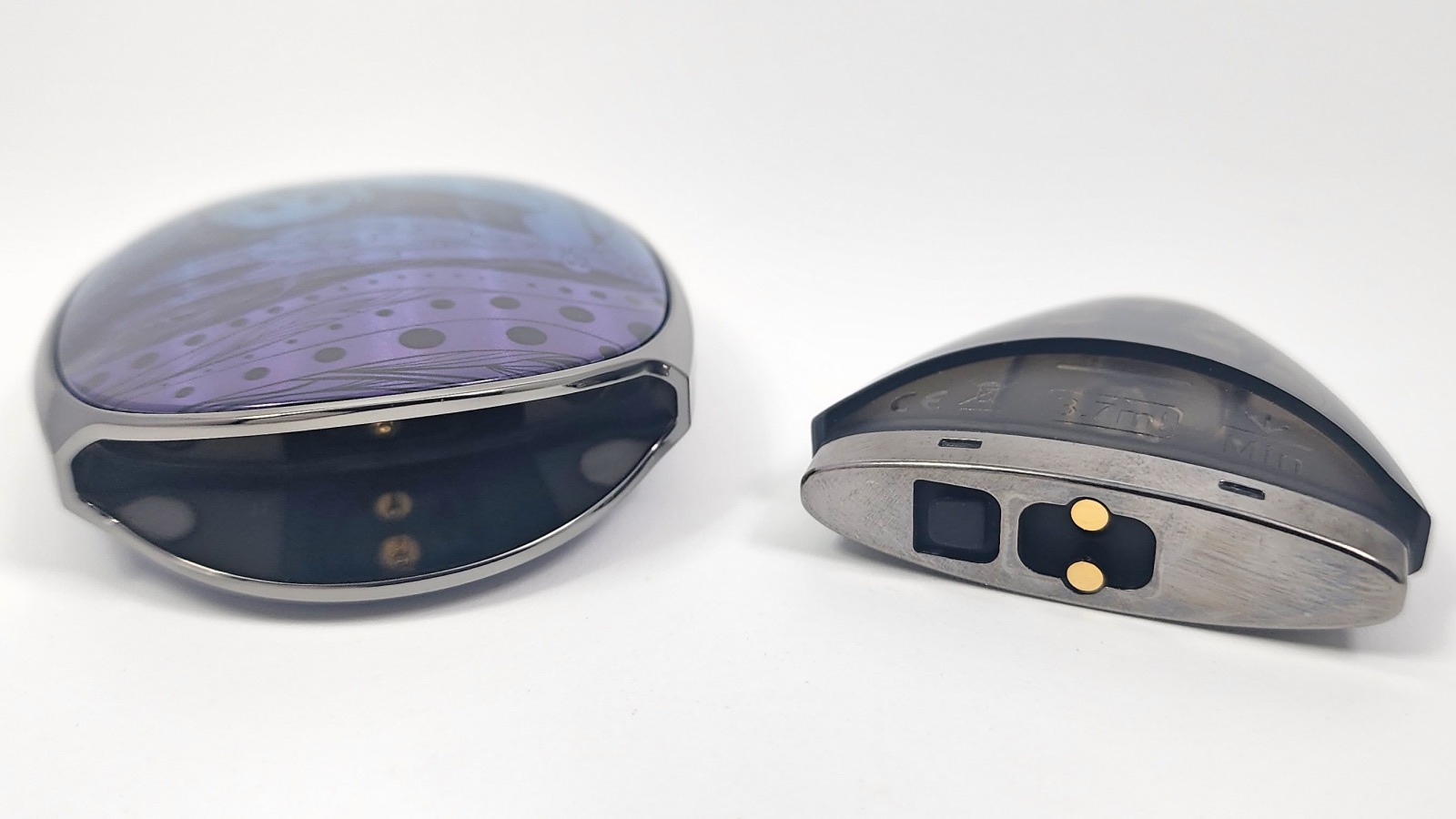 The pod comes up to a point at the top of the mouthpiece which makes it comfortable to hit and also gives you good suction.

The flavor is really good from these pods too. 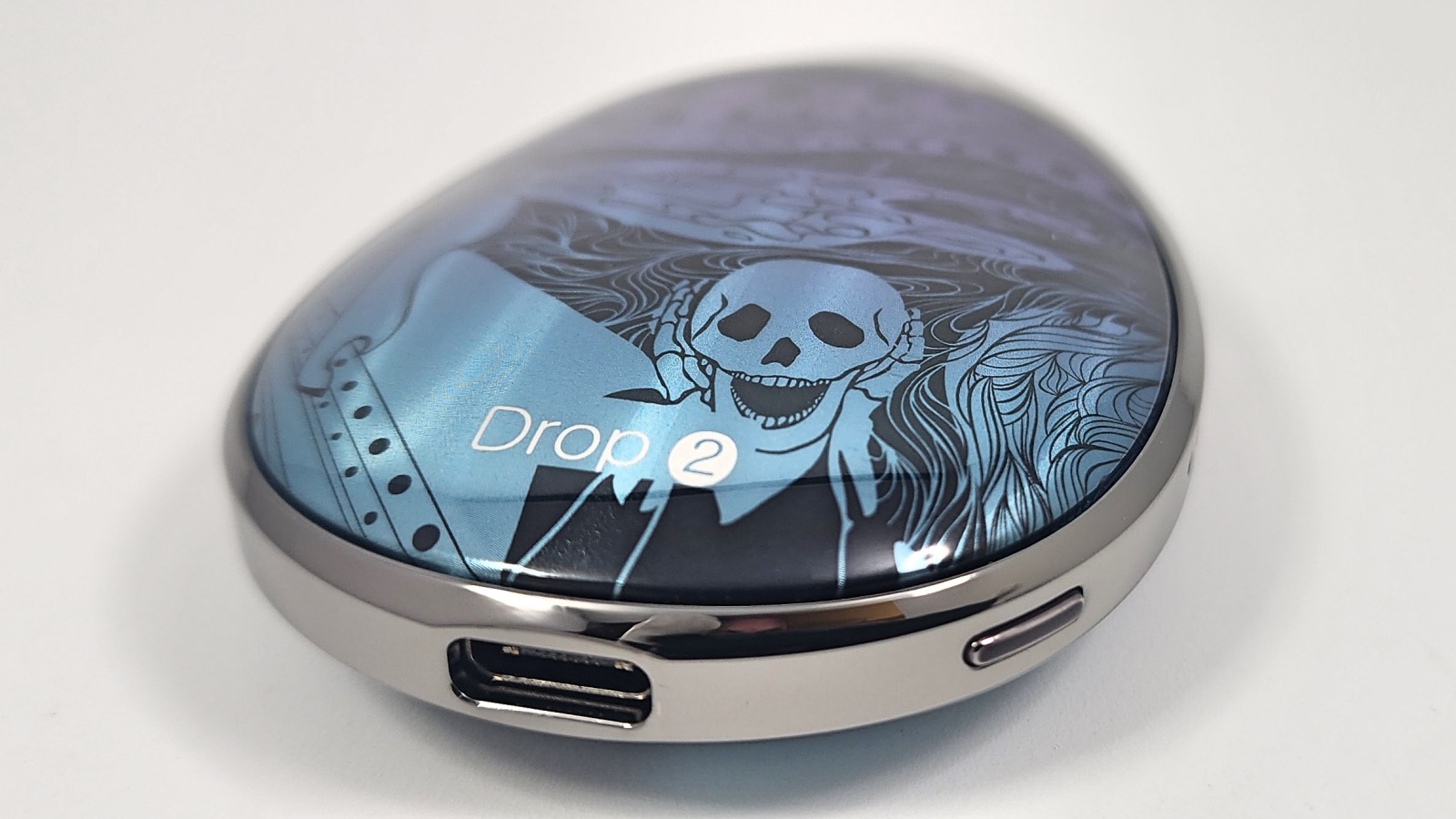 The battery inside the Drop 2 is a 1000 mAh battery, which is pretty big for a little device like this. It should be plenty to get you through the day. It charges using a USB-C cable too so that’s nice to see here. 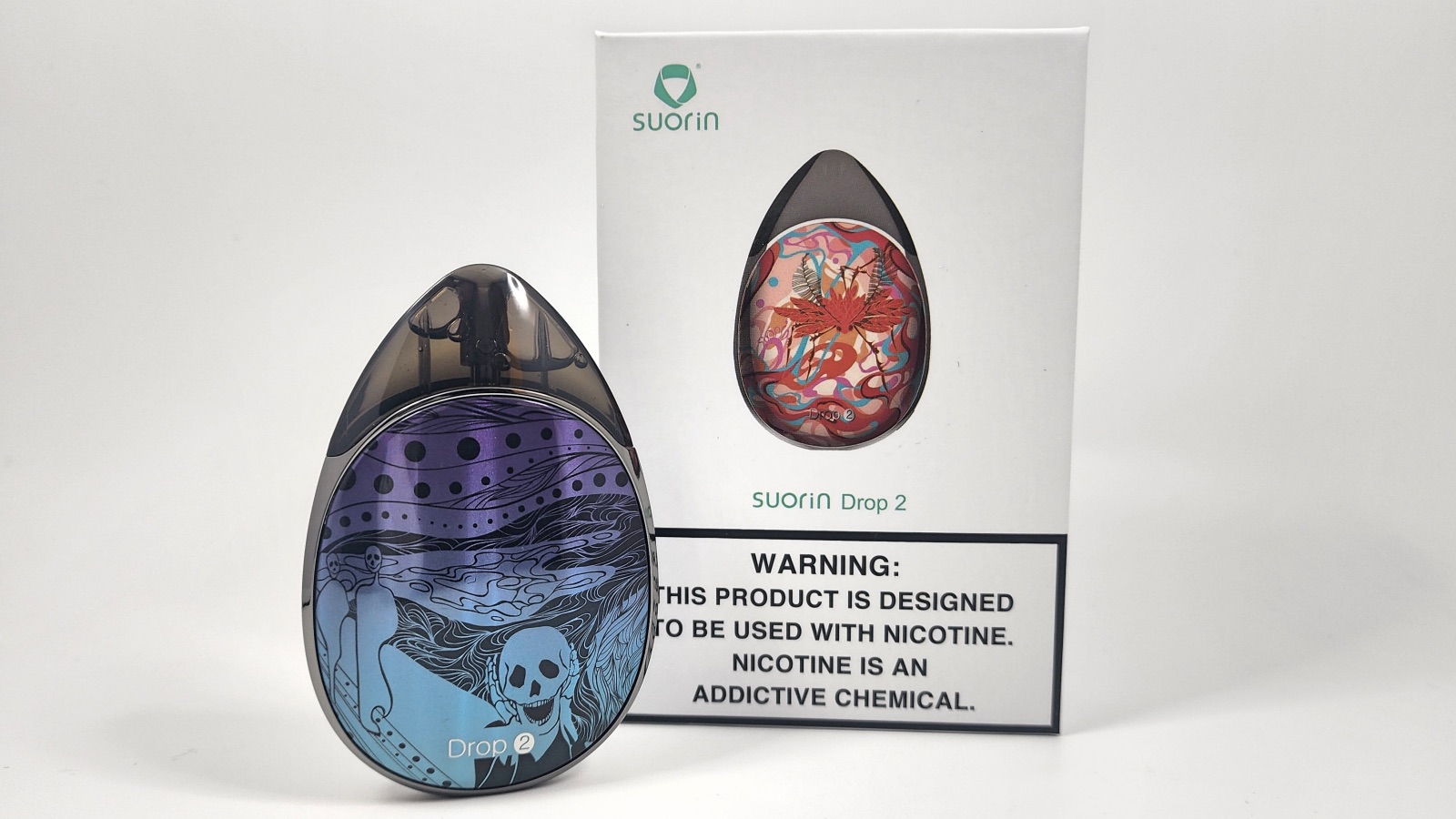 The device looks great and the form factor is perfect for carrying around in your pocket. The flavor from the pods is nice too. And I like the battery size and liquid capacity too. I would have liked for the draw activation to be more sensitive and maybe even to have a firing button. And I would have liked a slightly tighter draw.

This was sent to me for review from YoumeIt and you can get it from them for $29.95