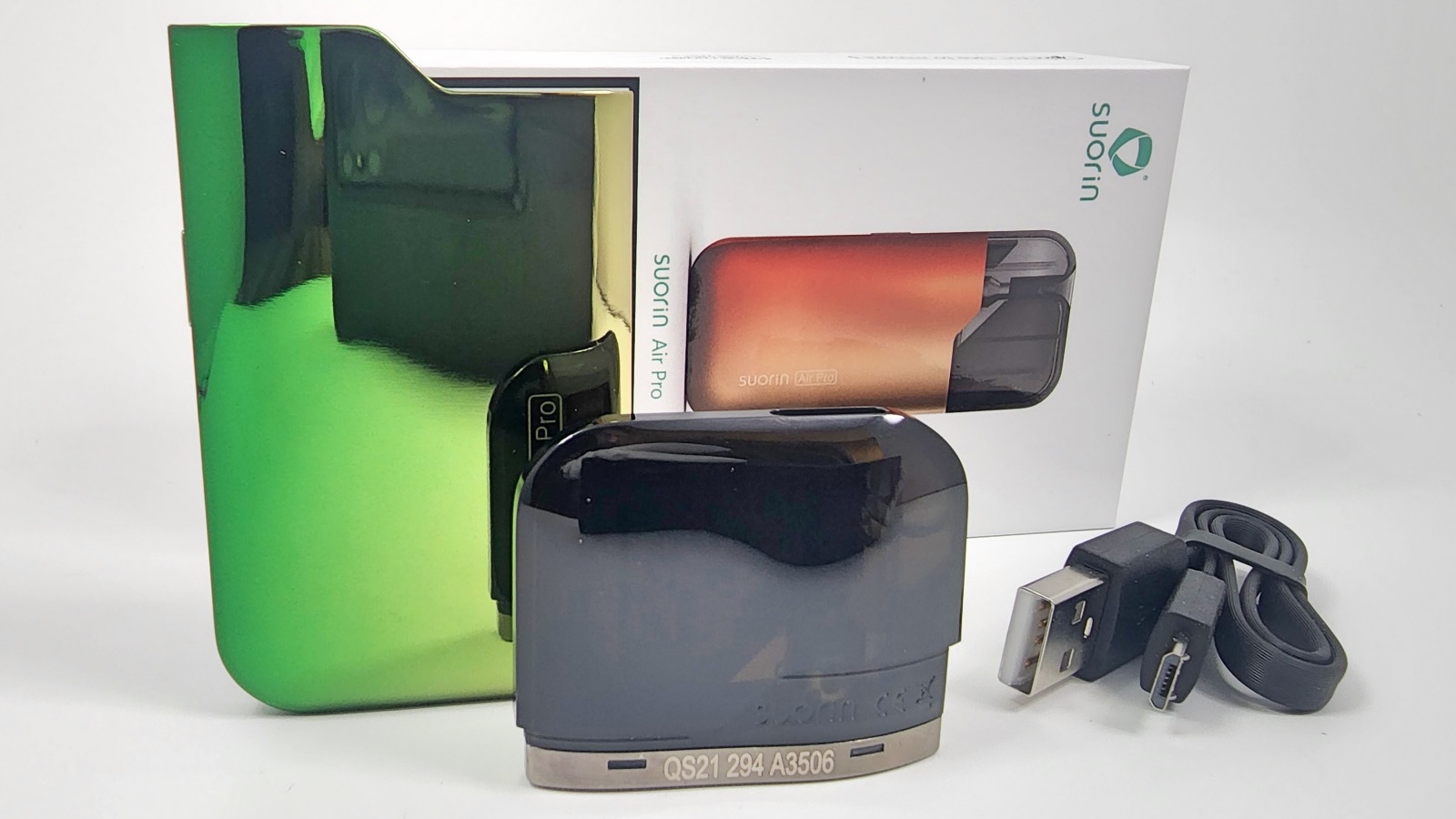 The Suorin Air Pro was sent to me for review from YOUMEIT, the official direct sales store of Suorin, AIRBAR, and more. Suorin is one of the longest-running and most well-known pod-device makers around. And they stay around because they make great pod devices. I reviewed the Suorin Air V2 back in 2018 and it was one of my favorite tight-draw devices ever. They already had pod devices figured out before pod devices were a thing. And here we are 4 years later with the Suorin Air Pro.

This is the successor to the Air V2 and has some big upgrades. It has more than double the battery size, more than double the pod capacity, and it now charges using a USB-C cable. The Pro looks basically the same but it’s just a little bigger than the V2 but it’s nearly the same size, which is great because the size is perfect. The pro is 96mm (3.7 inches) tall x 45 (1.7 inches) wide, and 12.7mm (0.5 inches) thick. It’s about the size of a credit card and as thick as about 3-4 credit cards. It fits great in your pocket.

There are 18 designs to pick from. That’s a ton!

So here are the first nice designs, with each one shown in the image below: Black, Silver, Gunmetal, Rainbow, Faded Skeleton, Ice Blue, Lavender Purple, Lively Green, Star-Spangled Blue

Because of the glossy finish on this, you can really see the fingerprints and oils from your hands so if that bothers you, you’re going to be wiping this thing down constantly.

The Suorin Air Pro has a firing button that allows you to turn the device off and on with five clicks of the button. I always like it when pod devices have the ability to turn off because you know there’s no chance of it auto-firing in your pocket or bag. When you turn the device on or off, the Air Pro also vibrates to let you know, which is great for anyone with vision impairment.

The Suorin Air Pro also has the ability to be draw-activated or button-activated. This is another big plus because if you don’t like the hit you get from draw-activation, you can fire with the button and always get a great hit. There’s nothing you need to do to turn this feature on or off. You can use either option at any time.

The device pushes a max of 18 watts on a 1.0 Ohm coil so you’re getting a pretty strong hit here. I really like the hits and it fires great every time.

The pod has a 1.0 Ohm coil, so at 18 watts, you get a nice strong hit. The power you get is actually surprising because it’s more than most pod devices. But Suorin really got these pods built perfectly to be able to handle it. I get great hits on the pod every time, even when chain-vaping.

The liquid capacity of the pod is 4.9 ml, so it’s a big pod with a lot of capacity. It’s also a lot more than most other pod devices, so another big plus here.

The pod clicks into place in the device and can only go in one way. There are cutouts that prevent you from putting it in the wrong way. You’ll also know the pod has made a good connection because the device vibrates when the pod makes a connection.

The airflow on the mouthpiece is off to one side of the pod, which is different. There are pros and cons to this. The pod is wide and flat, so I think if the airflow was in the middle of the pod it would be uncomfortable to use and it would be hard to get good suction. Having it on the end of one side makes it really comfortable to use. But the drawback is that you can’t just take a hit without having to look for that airflow hole. Until you get used to looking for it, you’ll probably find yourself trying to take a hit from the wrong side of the pod. It’s not a huge problem but just something to note.

The airflow comes in from the two small holes, one on each side of the device. It’s a loose mouth-to-lung hit but I think because of the power of the device, even if you like a tight draw, the hit is still really good.

The internal battery inside the Air Pro is a 930mAh battery. It’s a big battery for a small device. It holds plenty of charge to get you through the day.

There are also some connections at the bottom of the device. These were made so that you can charge the Air Pro using a magnetic charging dock that you can buy separately.

The Air Pro hits great, it always fires without hesitation, the flavor from the pods is excellent, and the size and thickness of the device is perfect. The only thing I think would make the Air Pro better would be if it had a USB-C charging port instead of a micro USB. And maybe a slightly angled mouthpiece to more easily find the airflow hole. But overall, this device is great.

This was sent to me for review from YoumeIt and you can get it from them for $24.99 (affiliate)