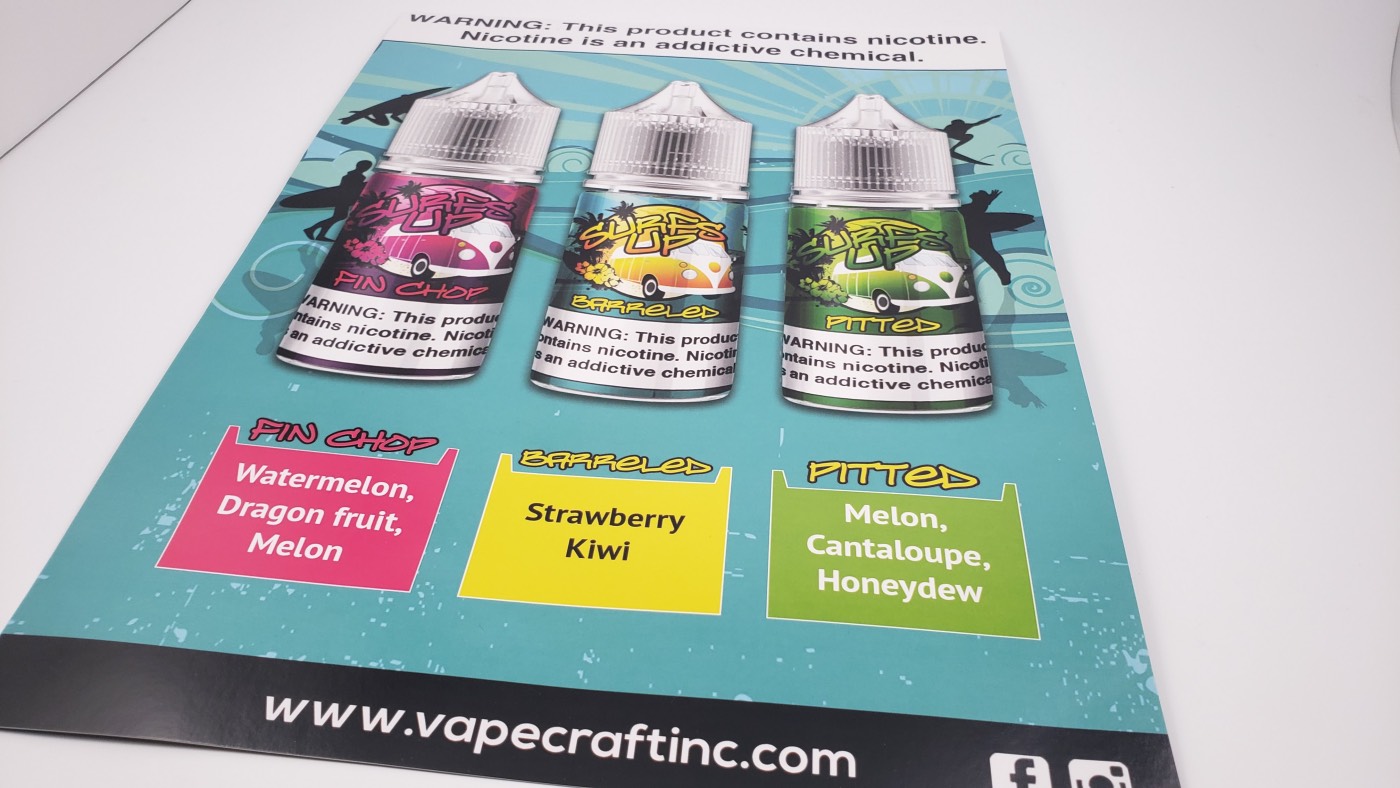 The Surf’s Up line was sent to me for review directly from Vape Craft Inc. Get it here. This is an entirely salt-based nicotine line and there are three flavors to pick from. I live in the midwest, I’ve only been to a real beach once in my life, and I’ve never surfed. So the lingo escapes me, but I looked up the meaning of a fin chop and it’s when a surfboard fin slices into a surfers skin and causes a serious injury. There’s actually a pretty crazy story at the top of Google about a young surfer who just had the top of his head fin chopped, and it’s pretty bad. Not that this has anything to do with this e-liquid, but I found it interesting.

Smell: This smells just like a mix of sweet watermelon and melon. I don’t really smell the dragon fruit, but that’s a hard one to smell or taste anyway.

Taste: Right off the bat, I get a strong sensation of menthol or Koolada. It’s not overpowering, but I wasn’t expecting it because it’s not mentioned in the product description. But it calms down after a few hits. Then I get that watermelon and just a slight hint of melon. And like I mentioned with the dragon fruit, it’s hard to get, but it’s probably helping out the overall flavor here. It’s sweet and smooth, and that menthol gives the entire thing a refreshing feel. It’s pretty good. Continuing with surfer lingo education, I looked up barreled and this is actually probably something you’re familiar with, even if you’re not a surfer. A barrel is when the wave curls over itself and closes a surfer in, essentially looking like a barrel or a tube.

Ok, so Vape Craft Inc describes this as a refreshing ripe strawberry and kiwi.

Smell: The smell here is very unique, which I’m hoping translates to the vape. It definitely smells like strawberry, but with a twist of something else, which is probably that kiwi.

Taste: This one is really good. The strawberry seems to have a mix of natural earthiness, but also some sweetness. In most kiwi e-liquids I’ve tried, the kiwi is really hard to point out, but it’s very noticeable here. It’s still really light, like kiwi is naturally, but the kiwi adds a great kick to this one. This flavor is smooth and sweet. And one final lesson on surf lingo. Getting pitted is when a surfer gets situated neatly into a barrel wave. Something I learned while reading about all of this surfing stuff is that getting into a barrel is extremely difficult and many surfers might never get the chance in their entire lives. You definitely wouldn’t get that based on the scenes we see in movies or TV, so it’s an interesting fact.

Smell: This smells great. The honeydew melon comes out strong and sweet in the smell

Taste: This is one of the best, most flavorful Nic-salt flavors I’ve ever had. Nic-salts tend to be a little muted just because they have so much nicotine, but this tastes just like a regular nicotine e-liquid. It’s a very smooth melon flavor with the most prominent flavor being the honeydew. I don’t get a lot of cantaloupe, but it’s definitely adding something here because this isn’t just a straight honeydew. If you’ve ever had Spew from Mount Baker Vapor, it’s a lot like that, and I loved that one. So this one is definitely a winner for me. I really liked this entire line. Vape Craft Inc usually releases mild flavors, which are good, but mild. This line is very different because not only are the flavors much stronger than usual, but also because these have stronger flavor than typical salt-nicotine e-liquid in general. All of the e-liquids in this line are full of flavor, they’re sweet, and they’re smooth. This is a very good salt-nic line in my opinion.

So if you’re interested, you can get the The Surf’s Up line VapeCraftInc.com for $18.99 per 30ml bottle in either 25mg and 50mg nicotine.