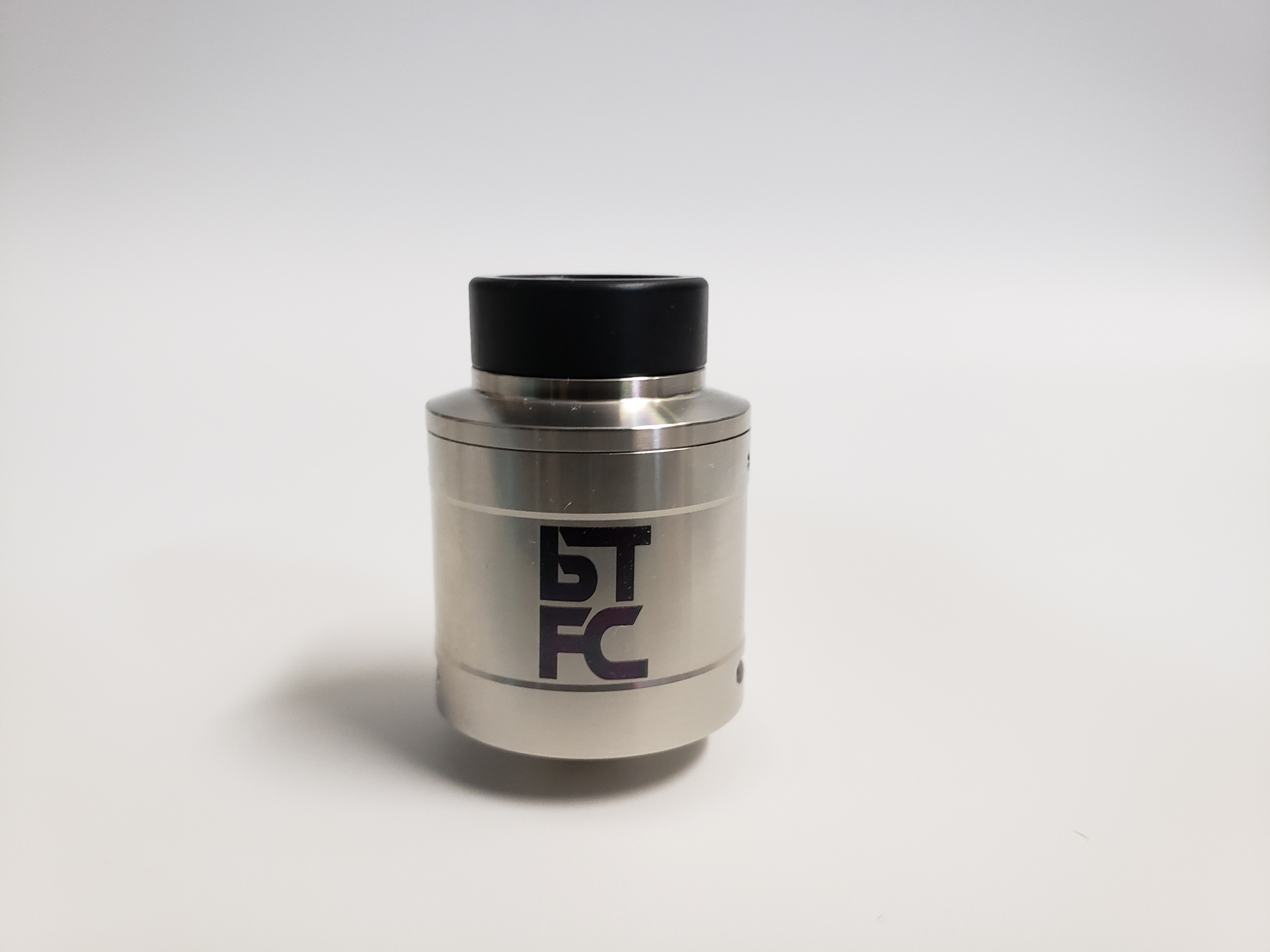 The BTFC RDA was sent to me for review directly from Augvape. This is a collaboration project between Augvape and vape reviewer Mark Fagan, or more commonly known by his Youtube name, VapnFagan. According to Mark, the BTFC wasn’t conceptualized by him. This was a project that Augvape already had in progress, but they brought Mark in to help along the way, and from the sounds of it, he actually did contribute a lot to the project, so it does make sense to call this a collaboration. You get two drip tips here. The pre-installed tip is a black Delrin tip and the extra tip is a frosted tip.

The Delrin tip is short and is flush with the metal that protrudes from the top cap.

The frosted tip doesn’t sit flush with the protruding metal on the top cap, so it affects the aesthetics a bit, whether that’s good or bad is up to you. I don’t mind it. Both tips are the same diameter, but the frosted tip is a little longer, so that might be more comfortable for some people. Both drip tips fit into the top very tightly, with the o-ring inside the top cap. The tightness is important on this tank because it allows you to pull the top cap off by holding the drip tip. The top is short and connects to the barrel. The top airflow is controlled by this top cap. It’s not too tight, so it’s easy to adjust the airflow. I would say that it’s a little loose though, and it gets even more loose with e-juice on it. Since it’s so short and because of the looseness, I worry that it might pop off in my pocket.

On the outside of the barrel, you have the logo, I which I think looks really simple and nice. On the inside, there are several lines of different grades. The one at the top slants towards the drip tip so that probably helps direct the vapor and flavor.

The lines near the bottom of the top cap I believe are designed to prevent the top cap from being pushed further than the deck. It’s a fine feature, but it also causes a minor problem with putting the barrel on. A lot of times it gets caught on the deck and you have to sort of wiggle it around to get it to slide on. It’s not a big deal, but it’s something I’m surprised they didn’t notice or decide to fix.

Once it’s in the right spot, the barrel slides right onto the deck nice and tight. The restriction seems just perfect. It’s easy to move around to adjust the airflow. The BTFC has both bottom airflow and top airflow. You can’t close either side off, so this is a dual coil only atomizer.

You can see that these slots are pretty big, so as you can imagine, there is a vast amount of airflow you can push through here. That means you can get massive clouds if that’s what you’re looking for. But you also have the ability to shut either the top or bottom down.

There are usually pros and cons to both types of airflows. RDAs with bottom airflow usually have better flavor but are prone to leaking. RDAs with top airflow rarely leak, but they often have less flavor. That’s not the case at all with the BTFC.

Both airflow options were designed very intelligently and I think this is really where it helps for manufacturers to get input from reviewers like Mark before putting something out on the market. There are a lot of really cool things happening in this deck.

First, look at that juice well. It’s deep. But there’s also a lot of metal in here, so that can be deceptive. I was able to fit about 2ml of e-juice in here, so yeah, nothing crazy, but still pretty good. And now the coil posts. Everybody loved the ease of installing and clipping coils in the Drop and Dead Rabbit, but this takes it to a whole new level by making it even easier. You just drop the coils into the holes and clip them from the back. This is awesome for two main reasons; 1.) you don’t have to try to fit your wire cutters into a tight space, and 2) you don’t have to pre-measure the wires before installing. This is probably the easiest deck I’ve ever built on.

And those post holes are big, so you can fit some big coils in here. You’ll also notice that the bottom airflow holes lead right beneath where your coils are positioned. It hits the coils perfectly and creates really good flavor. And those airflow holes also sit really high, like I mentioned earlier, which makes this RDA much less likely to leak than other atomizers.

And the last thing about the deck is that it looks like one of the deck posts comes out, but I can’t figure out how it’s held in place. I don’t see any screws and I tried moving it around a bit with a screwdriver while the 510 was out, but it didn’t budge. It clearly comes out, but I didn’t want to break it, so I didn’t mess with it any further.

It’s also squonk-ready. The squonk pin is not pre-installed, which according to Mark was intentional. The reason for that is because he hates if a squonk pin is pre-installed and he doesn’t realize it, then puts it on a device and fills it up with e-juice to have it leak everywhere. I think that’s a really good reason and something I’ve never thought about. I’ve never had that happen to me because everything I get goes under the camera while I’m opening it, so I catch it, but I can definitely see how easy it would be to make that mistake. That’s another small, but really smart idea from Mark.

Anyway, the squonk pin works just fine. It pushes plenty of e-juice out from these little slots in the deck. The squonk pin seems to push from the sides and the top, while probably also sucking up the excess e-juice from the side holes. Since I can’t see anything beneath the posts, I can’t tell you much more than that. But it works fine for me!

Ok, so that’s the BTFC from Augvape.

I don’t know the story of how the BTFC got its name, but it’s an acronym for Bottom Airflow, Top Airflow, Flavor, and Clouds. It’s a silly acronym, but it absolutely makes sense for this RDA. This RDA has an intense flavor. And with all that airflow and ability to hold big coils, it can definitely make massive clouds too. This has become one of my favorite RDAs of all time. I love this thing and Mark and Augvape did an amazing job together.

I really only have two cons; the barrel doesn’t always go on smoothly and the top cap is a little jiggly, which could make it easy to fall off.

But other than that, no other gripes.

From what I’m seeing online, you can get it for around $30 in most places. In my opinion, it’s definitely worth it.

Where to Get It

Here are some sites you get it from (affiliate links):