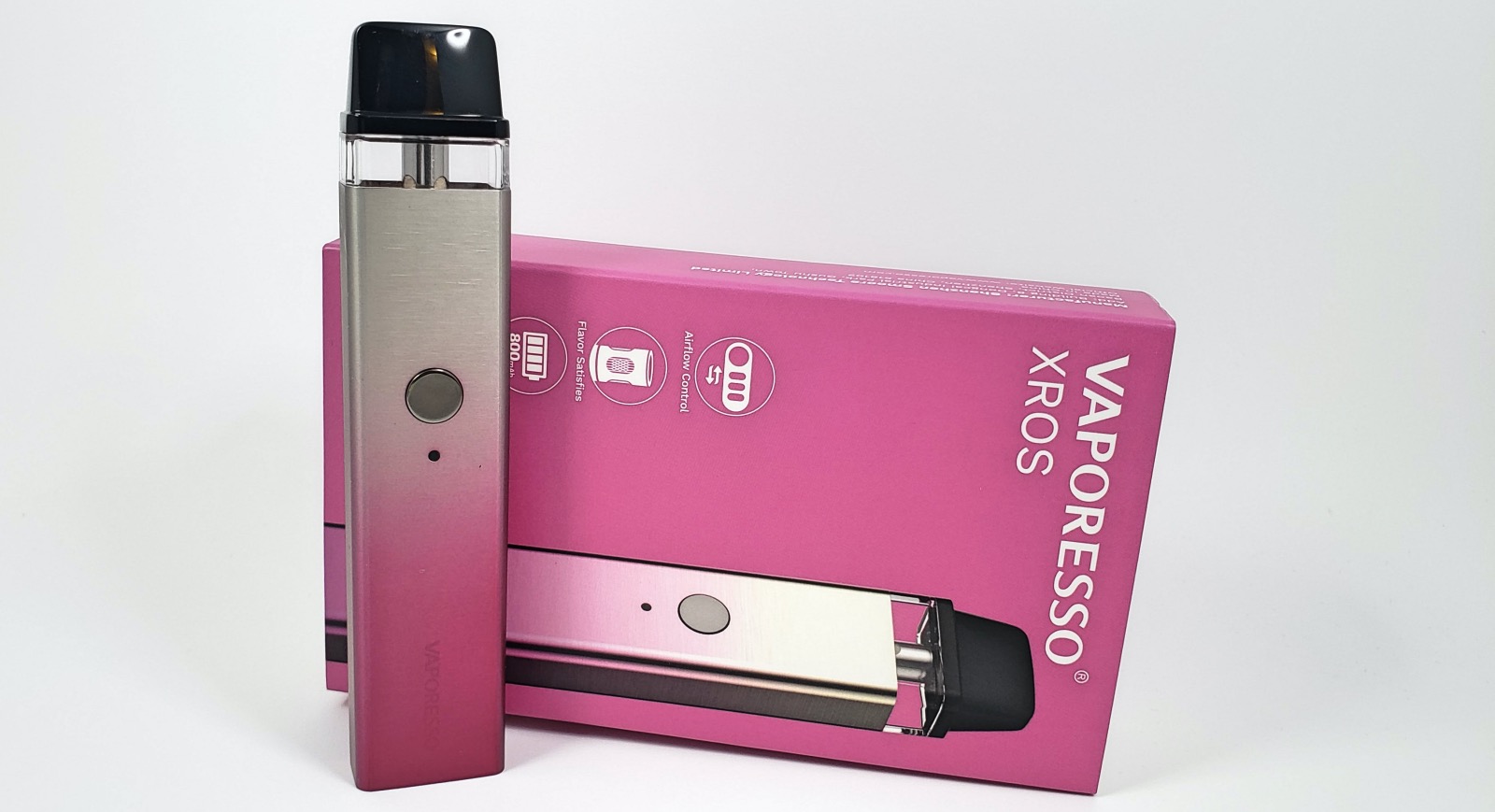 The Vaporesso Xros was sent to me for review from Vaporesso. This pod device uses mesh coil pods, has an 800mAh battery, and has adjustable airflow. All great things in a pod device. And a lot of reviewers are calling this the Caliburn killer. I haven’t used the Caliburn, so I can’t tell you, but I’ll tell you what I think about it. 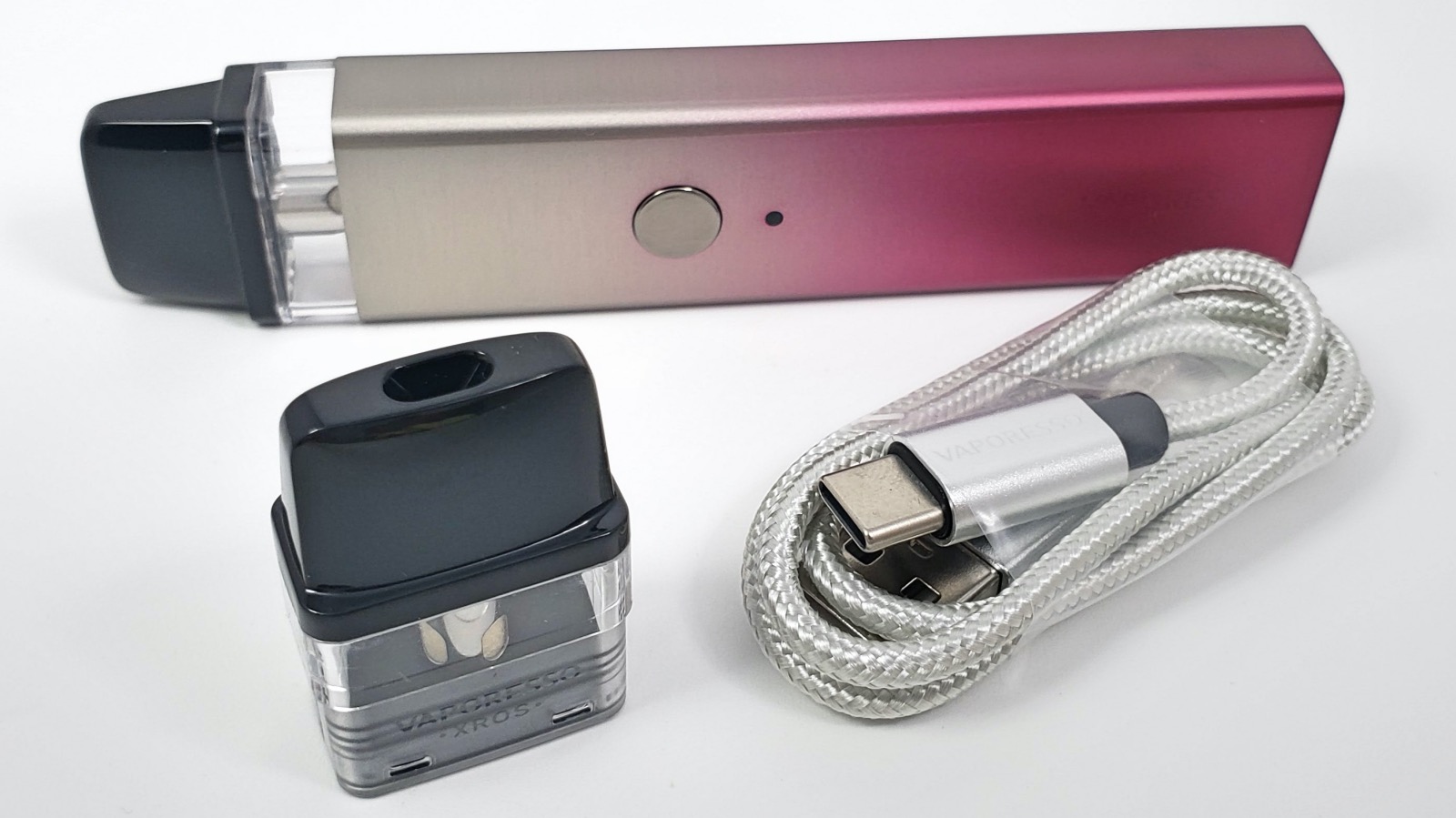 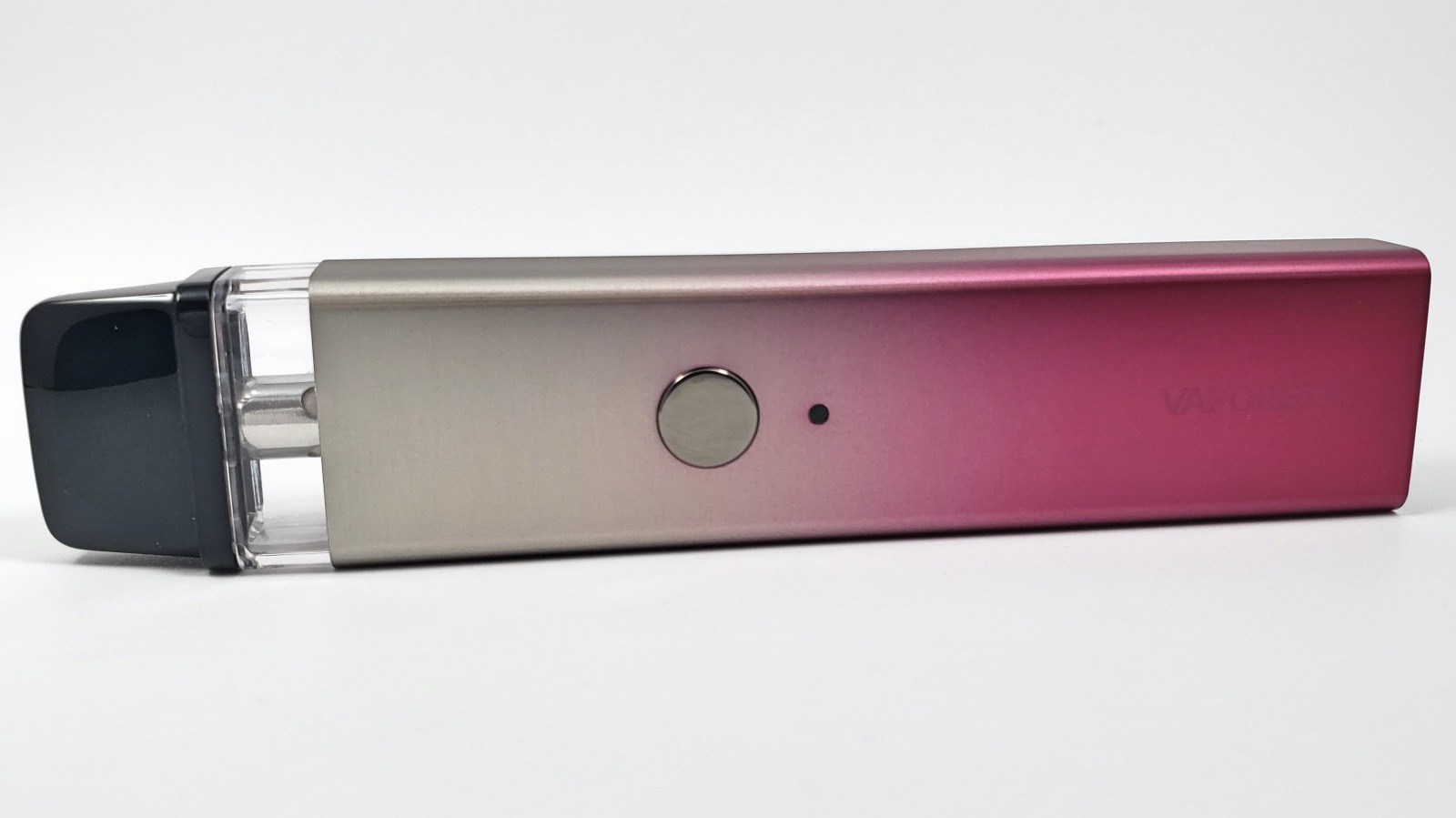 The design is very sleek and minimal. I really like it. It has a matte finish, a nice brushed metal button, and an LED light on the front.

Something unique about the XROS compared to other pod devices is that instead of using aluminum for the body, they went with stainless steel. So this is going to be stronger and be less likely to have issues with corrosion over time than other types of materials.

The size is comparable to other popular pod devices like the Uwell Caliburn or Smok Nfix. If you want specifics, it measures out to 112mm x 23mm x 13mm. That would be about 4.4 inches long, 0.9 inches wide, and 0.4 inches thick.

Five clicks of the firing button turns it off and on.

Here’s one of the cool features of the XROS. You can use this in either draw-activated mode or button-activated mode. I think this might be the first time I’ve ever seen that. And this is cool because it seems like vapers tend to strongly prefer one or the other, to the point that it can impact a buying decision! And the XROS has both so that should make everyone happy.

What I really like about the button-fire feature is that I get a nice consistent hit every time. In draw-activated mode, it’s dependent on my air intake and how much air I’m drawing in. Both options work great though, I just prefer button-fire.

The XROS has a constant voltage output of 3.6 volts and has an adjustable wattage of either 11 watts or 16 watts. The wattage changes based on the coil that you use. They have this feature in other devices and it always works great, and it does here too. 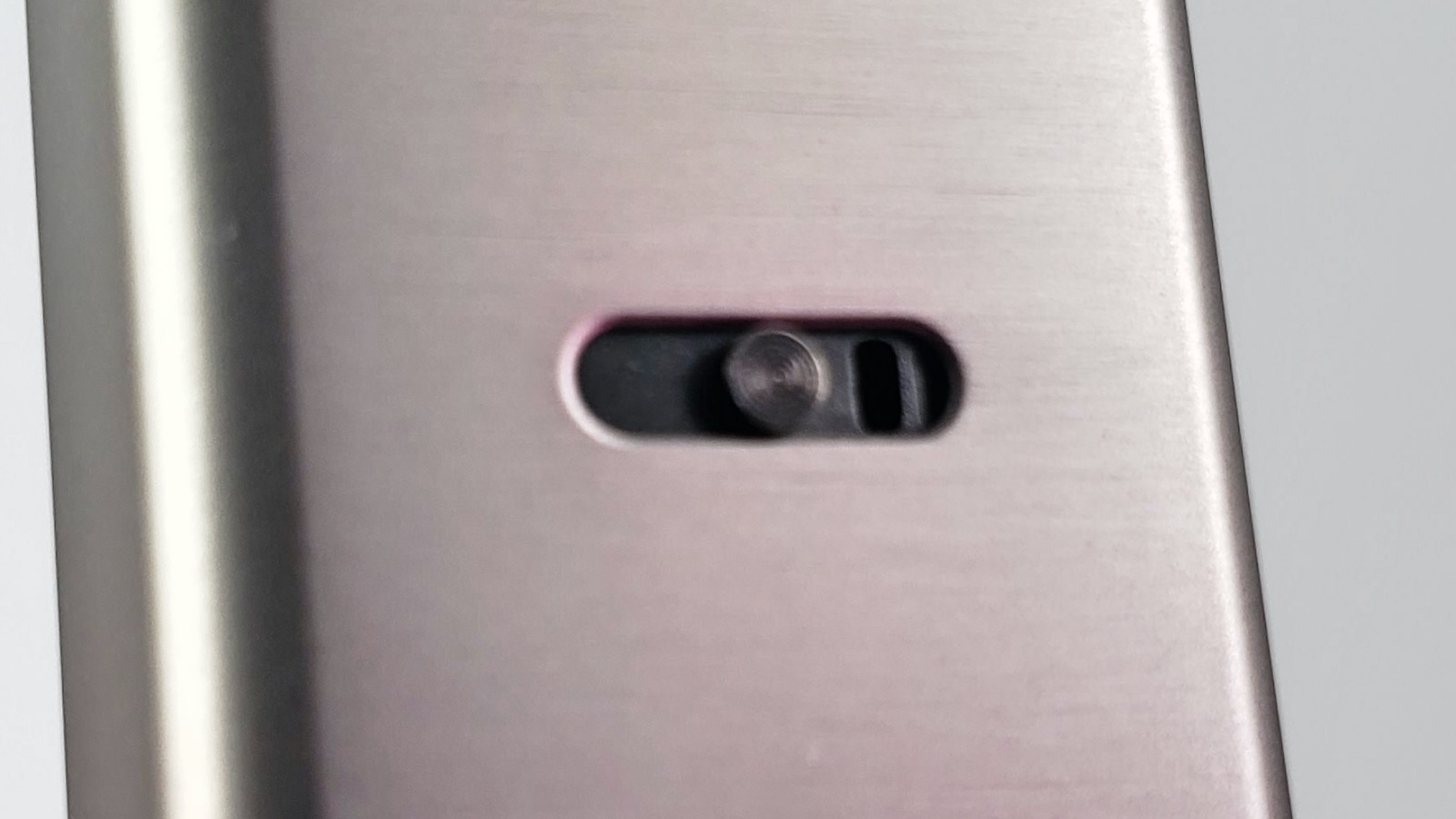 On the other side of the XROS is an adjustable airflow switch. I love this! It’s my opinion that all pod devices should have adjustable airflow. I personally really like a very tight draw but we all like different types of airflow, so this makes this device way more appealing to a wider variety of vapers. 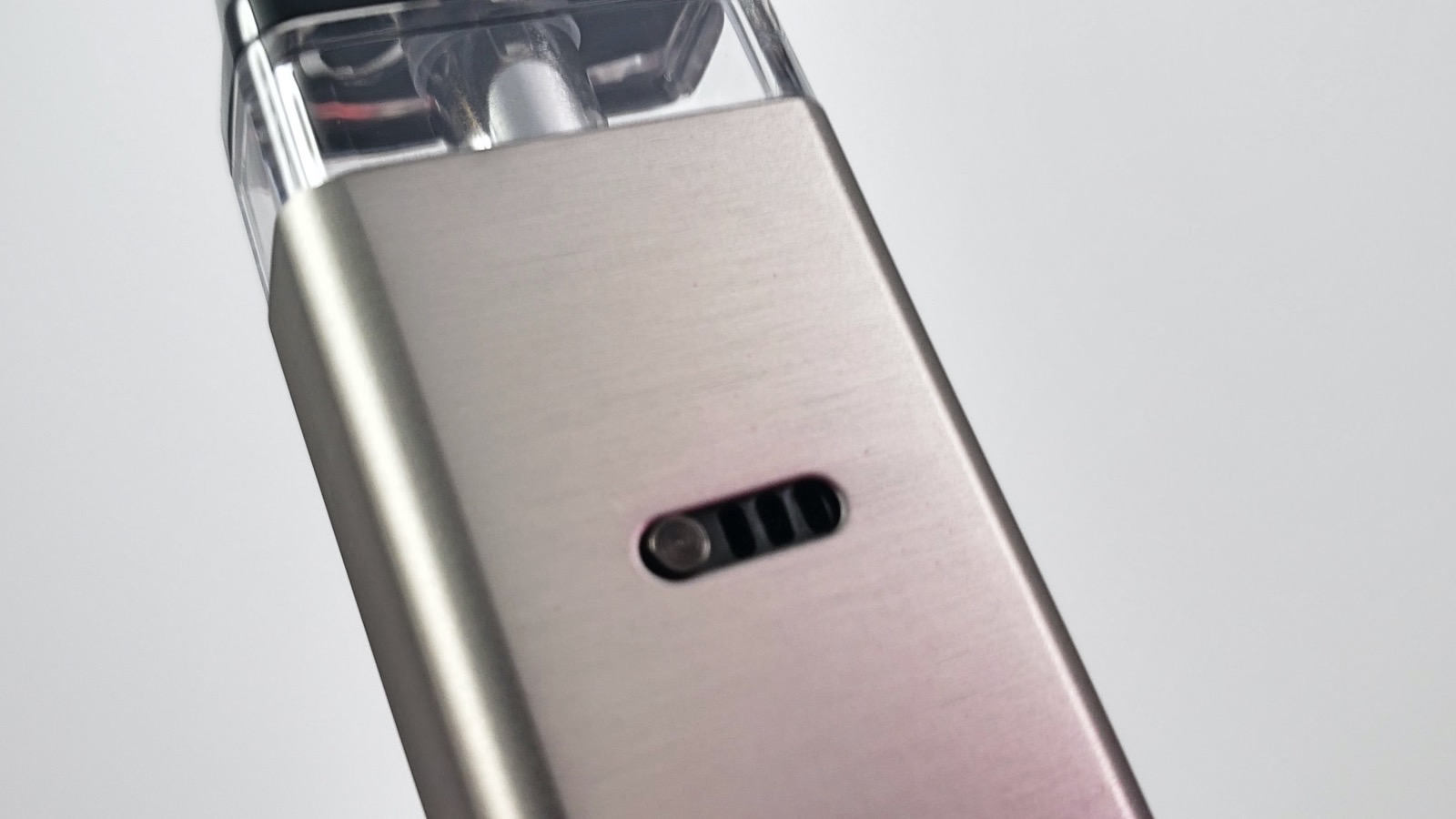 The airflow comes from the side of the device and comes up through these little holes where the pod connects and you can see those holes on the pod.

This little switch on the back slides very smoothly through each setting and it’s really firm. It won’t move on you in your pocket. When it’s wide open, you have three airflow holes open which I think gives you enough airflow to take a restricted lung draw. Closed down any further than that it’s mostly Mouth to Lung airflow. You can close it all the way down to where you have no airflow holes open, which is so tight that you can barely get a hit, which is good. That means you should be able to adjust the airflow to as tight as you want it.

One thing to note is that the position of the airflow is in a place where your finger might block it while you’re vaping, depending on how you vape, so that might be something you might have to work around. 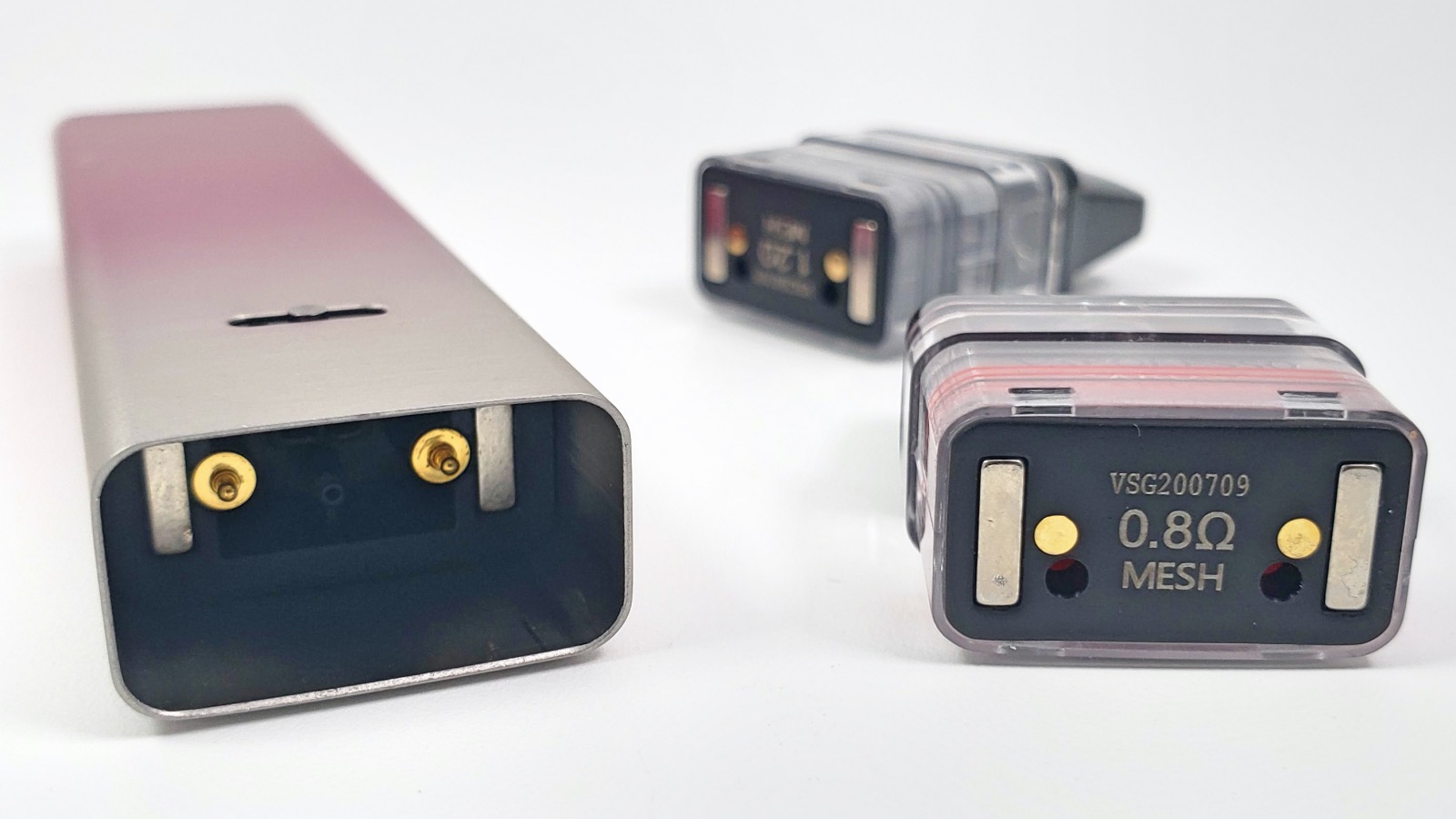 The pod holds 2ml of liquid and is designed to be easy to fill. 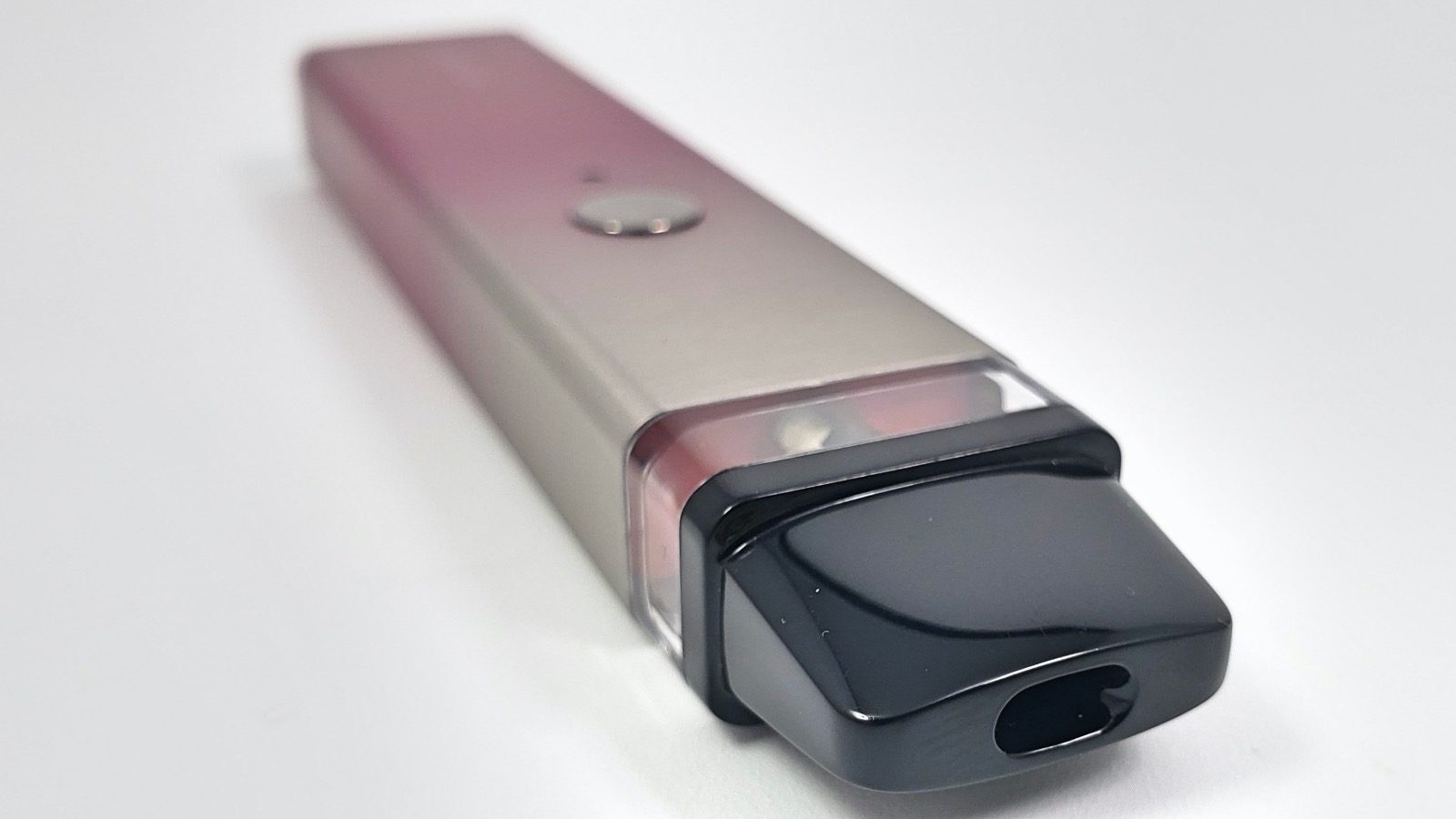 It’s a top-fill pod designed to push and open with one hand. That’s sort of true I guess. So what you do is pop the mouthpiece off of the pod and from there you can see the fill port. 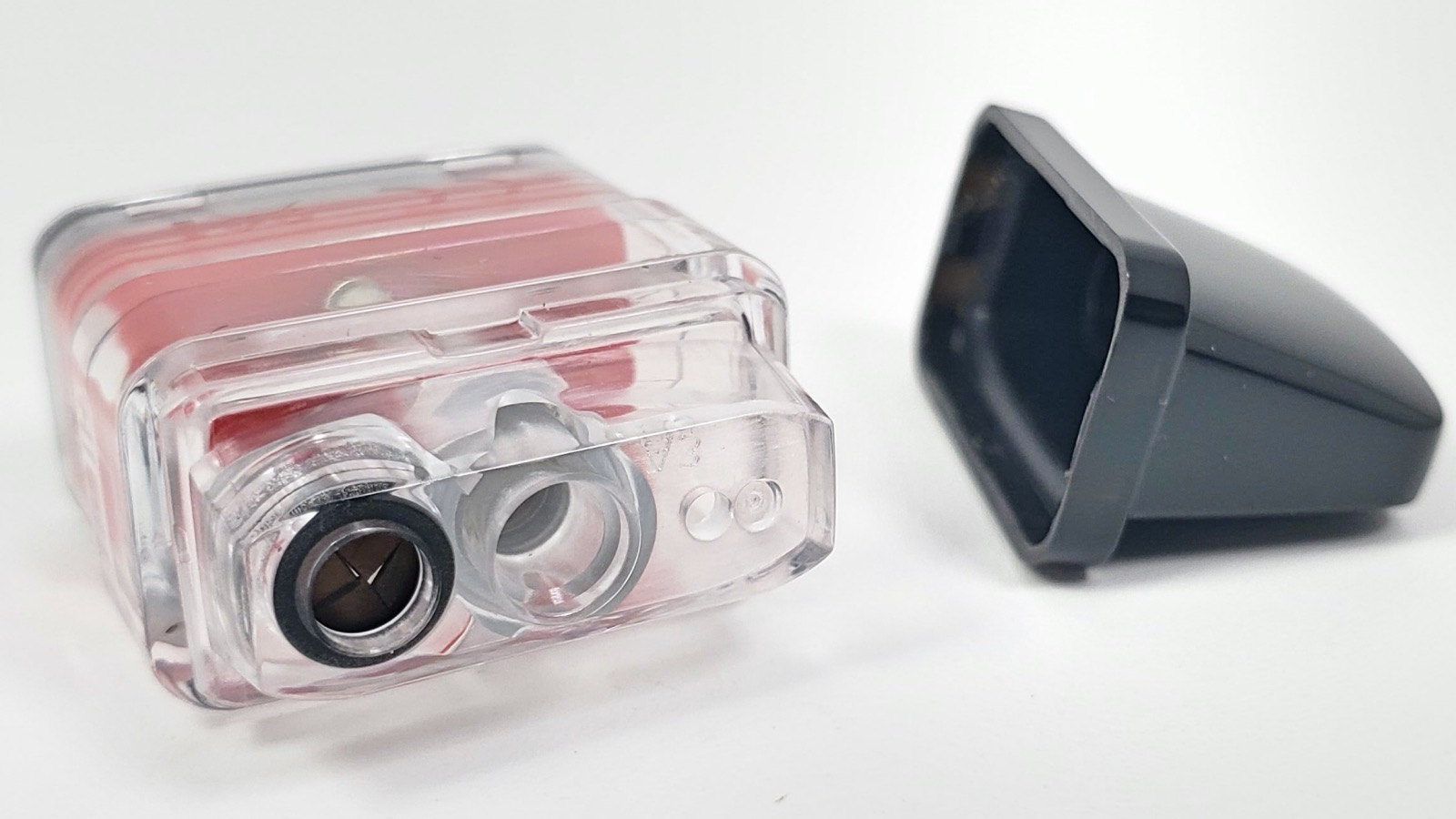 So yeah, you can do it with one hand, but it would have been even easier if it was a slide cap and you didn’t have to hold the mouthpiece in your hand while filling it. But yeah, technically a one-handed fill.

One thing that stood out to me is that the plastic is very clear, which makes it easy to see how full the pod is. I like that. 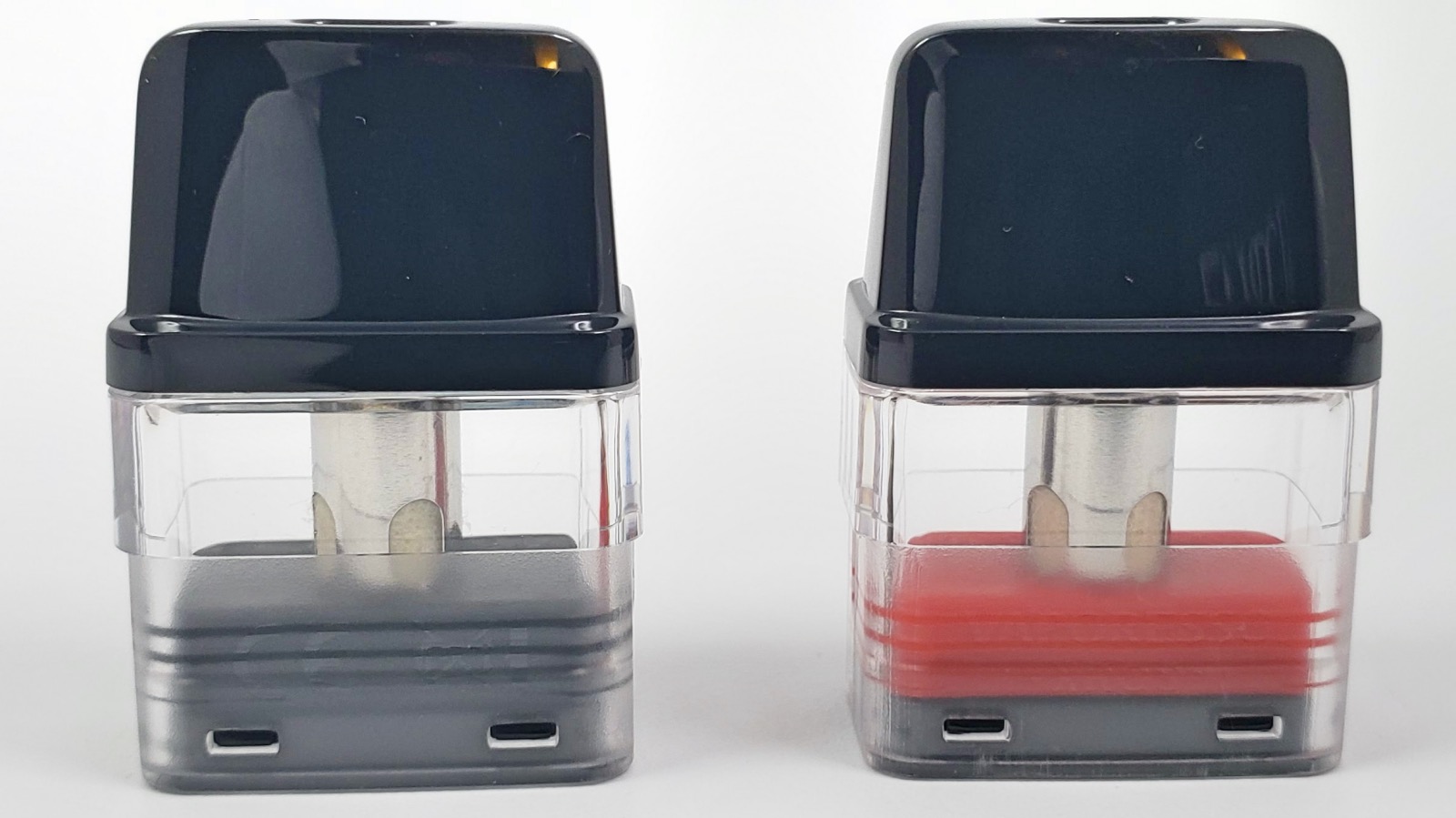 Vaporesso is using their always-awesome mesh coils in this pod system. There are two coils available; a 0.8ohm mesh coil or a 1.2ohm mesh coil.

0.8 Ohm Coil – The device pushes either 11 watts or 16 watts, so this coil gets 16 watts. 16 watts seems perfect. It performs great and the flavor is pretty good. 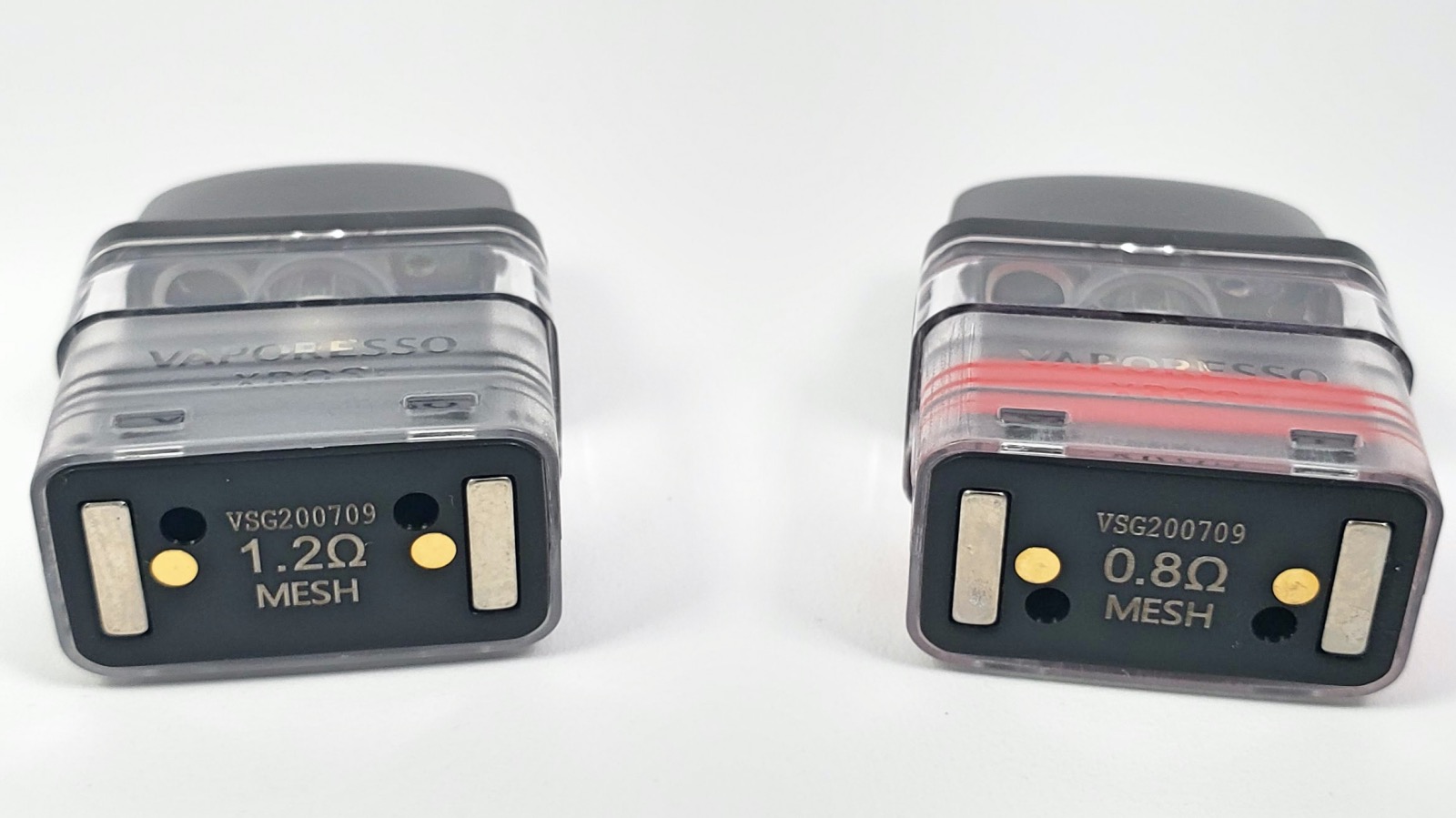 1.2 Ohm Coil – This coil gets 11 watts and again seems perfect for the coil. I actually can’t really tell much of a difference between this coil and the 0.8 Ohm coil. They seem to have the same airflow and the same amount of flavor production. 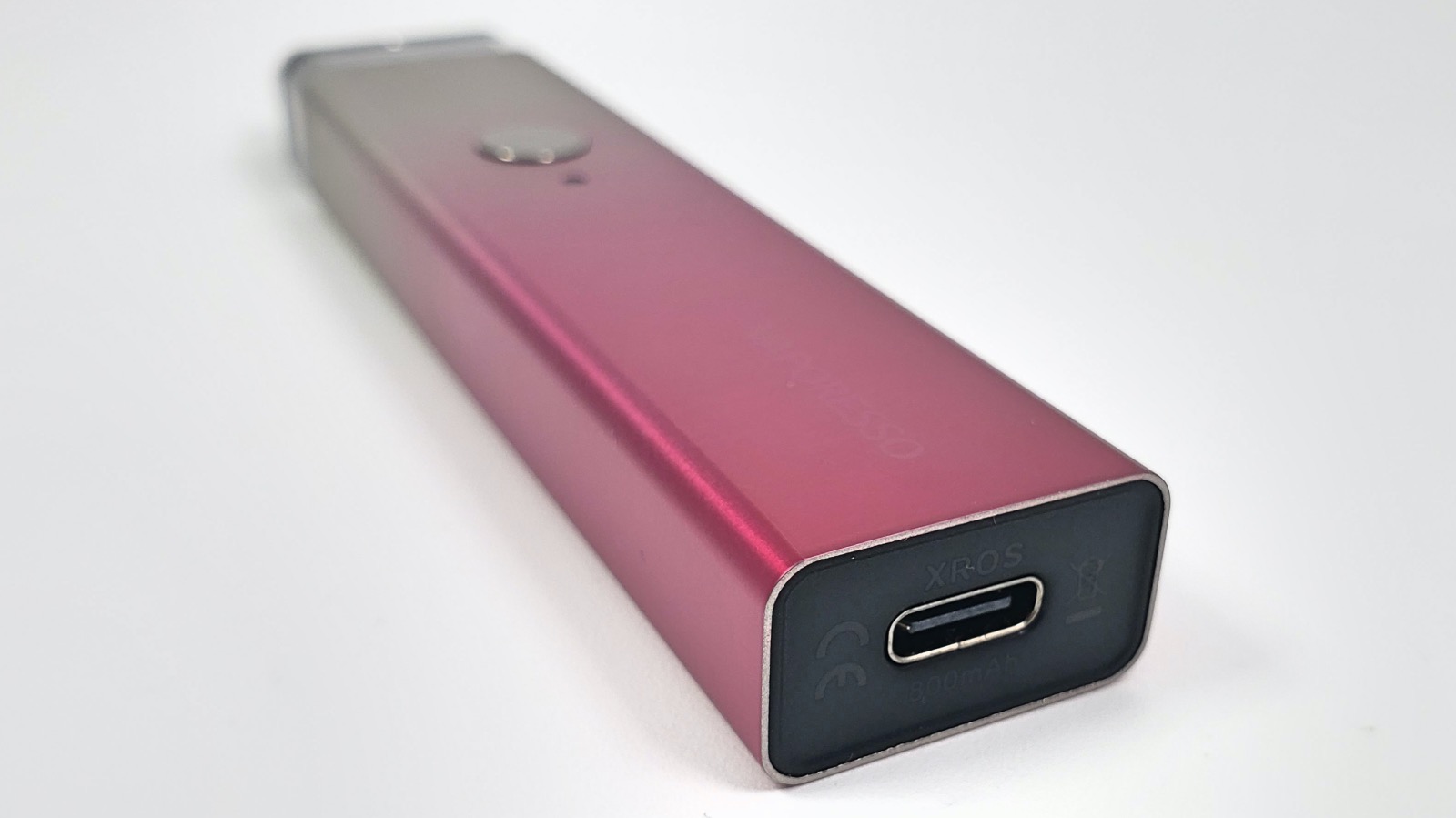 The battery inside the XROS is an internal 800mAh battery, which is pretty typical for pod devices these days. It’s a good-sized battery that should last you a full day or more of vaping.

Also great to see is that it charges using a USB-C cable. You can charge the XROS from a dead battery in about 45 minutes thanks to fast charging. The USB-C port is on the bottom of the device and you CAN vape it while it’s charging. 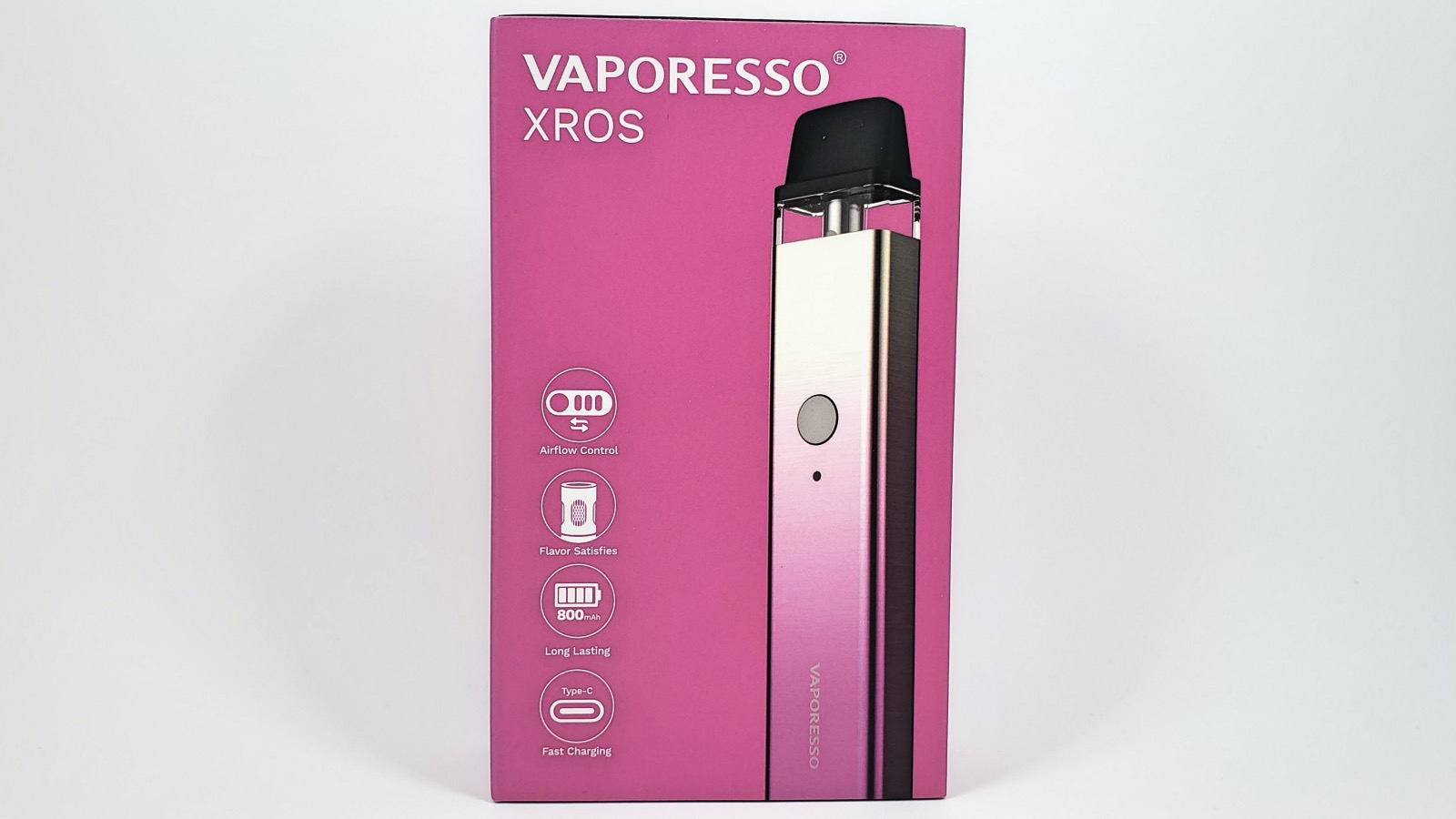 This has been one of my favorite pod devices. I’ve been using this every single day since I opened it and I love it. There are a lot of really good things about the Xros. You have adjustable airflow, auto-draw and button fire, mesh coils for great performance and flavor, and it’s easy to fill.

There’s really one drawback that I have and it’s that the airflow is in a spot that’s easy to block with your finger while you’re vaping. But that’s really it. It’s a very good pod system.

This was sent to me for review from Vaporesso and you can pick one up for $29.90.