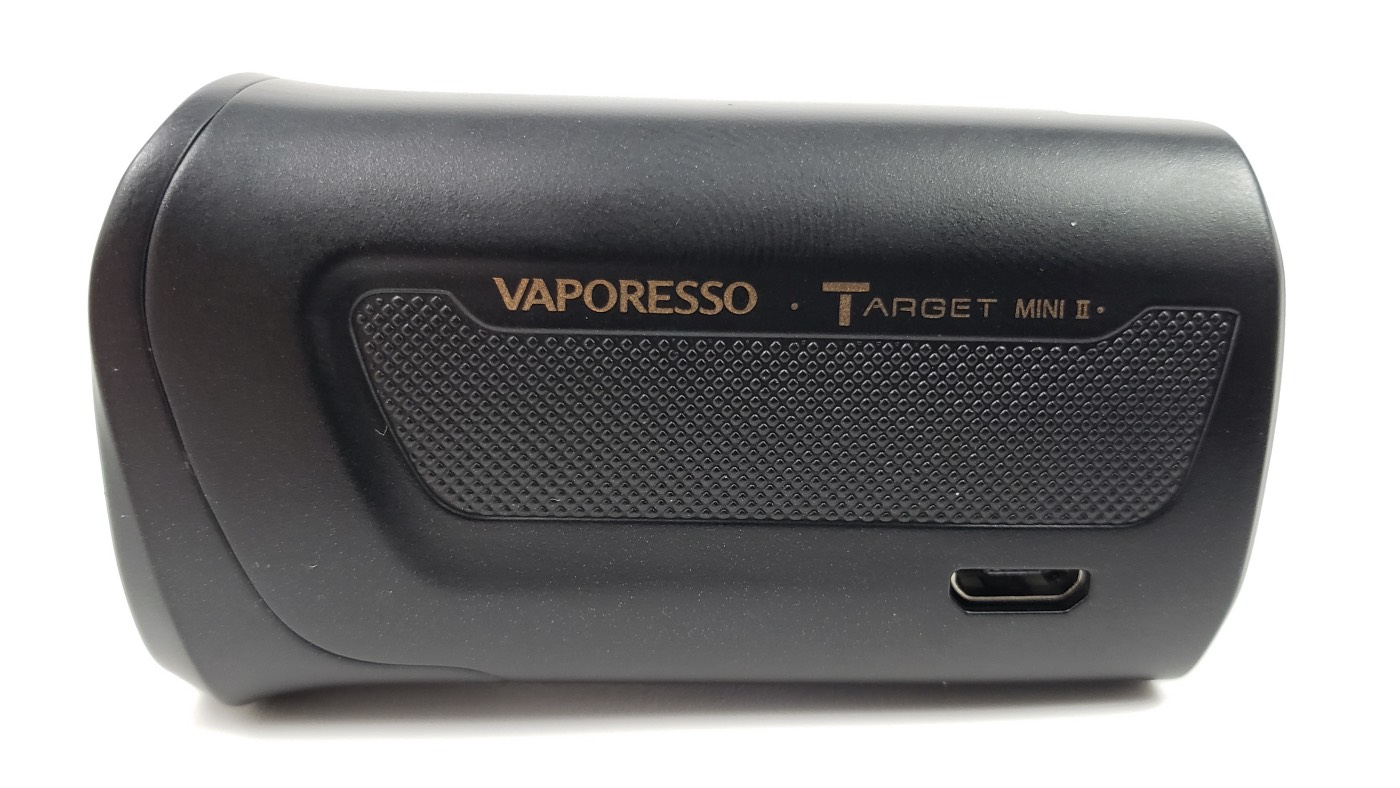 The Target Mini II was sent to me for review from Vaporesso. This is a sleek and modern update to the original Target Mini, which was already a pretty nice device. But this new model has better battery life, more features, and slightly more power. I personally really like the design. It’s a great looking device, it’s super-compact, and it’s really comfortable to hold and use. It comes in four colors; silver, black, red, and teal. It’s 107.1mm tall with the tank attached, 25.7mm thick, and 37.2mm wide. In inches, that’s 4.2 inches tall, 1 inch thick, and 1.5 inches wide.

The body has brushed metal finish, so it looks nice and it isn’t a magnet for fingerprints.

On the side panel is a the big firing button and the LED Screen. The screen shows your battery life, the mode you’re in, the wattage, resistance of your atomizer, voltage, puff counter, and hit duration. My biggest complaint about the screen is the brightness. It’s just not very bright, even when the brightness is turned all the way up.

Below that screen is a settings button and the up and down adjustment buttons.

One other drawback to this design is that it’s top-heavy on the LED screen side of the device and the bottom of the device is also rounded on that side, so it’s very easy to tip over, but only on the side.

Five fast clicks of the fire button turns the Target Mini II on and off. It’s a nice and big clicky button in a comfortable spot. To lock the device while it’s on, click the firing button three times fast.

While not in use, the Target Mini II also shows a clock screensaver. That will use up some battery life, so if you’re trying to maximize your battery, you can turn that off in the settings screen.

On the first menu screen you can choose from three different variable wattage modes and custom curves mode.

Variable wattage has hard, normal, and soft ramp up modes. When using little devices like this, I’m usually using high-nicotine e-liquids and high-resistance coils, so I usually go with soft or normal ramp-up to prevent burning the wick in the coil head, but if you’re using the Mesh coil at higher wattages, hard should be fine.

With custom curves mode, you can adjust the wattage for each second of your hit. If you want to fire at 5 watts for 1 second, 10 watts for the next and 50 for the next, you could do that. You can set it however you want.

On the next menu screen you have Super Player mode which lets you run atomizers built at a resistance between 0.03 to 5.0 ohm. It doesn’t really make sense to use a super low resistance atomizer on a low power device like this, but you have that option. You also have variable voltage mode, voltage custom curves, and the first temp control mode, which is for stainless steel.

On the next menu screen are two other preset temp control modes, one for Nickel and one for Titanium. And then you have two memory modes so that you can set your favorite modes and settings to memory.

And finally on the last menu screen is bypass mode and settings. Bypass mode lets you use the device like a mech mod, which determines your power based on the charge of the battery and the resistance of the atomizer.

And this last menu option is your settings menu. In here you can return everything to default, set your clock and date or turn it off completely, adjust the brightness of the screen, reset the puff counter, turn on smart mode, set auto on/off, set the screen timeout, and check the version info.

The Target Mini II has a 2000mAh internal battery. That’s plenty of battery for a device of this size, but of course the battery will die faster if you’re using the Target Mini II at the max of 50 watts all the time.

The battery charges with a micro USB at a fast charge of 2amps and can be fully charged in 60 minutes.

You can also vape the device while it’s charging Vaporesso makes this tank in several sizes, for example, I reviewed the 18mm version of this tank with the VM Stick 18 device. This model is the 22mm diameter version and it performs mostly the same.

The drip tip is an average 510 plastic drip tip. It’s comfortable to use and I like it, but it’s removable if you want to use your own. It’s held in place in the top cap using two o-rings. The top cap section consists of three pieces; the top cap, small lock, and connector. The top cap unscrews from the connector and gives you access to the fill ports to fill the tank up with e-liquid.

That small lock prevents you from removing the glass tank from the metal sleeve. If you want to remove it, Vaporesso includes a small tool in the box designed to unscrew it. But I couldn’t get it off. It’s too tight. I decided not to mess with it after trying to get it off for a few minutes because I didn’t want to break the tank or strip the lock. Under the connector are the glass tube and metal sleeve.

The glass tube allows the tank to hold 2ml of e-liquid. There’s also another spare glass tank in the box of the same size.

I don’t know if that sleeve provides any protection for the glass, but I would assume it provides at least some. But even if not, it’s a nice decorative piece for the tank.

Below the glass tube is the coil holder, which does just that; it holds the coil head in place. Replacing the coils is really easy. Just turn the tank upside down, take off the base, pull out the old coil and plug in a new one.

With most tanks, you screw the coil into the base, which leaves the tank open and vulnerable to being spilled, but with this design, you’re less likely to spill the tank or make a mess. And if you do accidentally spill the tank, it’s not all going to come out at once. So I like how they built this. These coils are designed for low wattage, so you’d use these for high-nic e-liquids or CBD liquids. They produce pretty good flavor and they have a long life. These coil heads are made with tea fiber and cotton, which is designed to soak e-liquid evenly and efficiently. These are designed for slightly higher wattage and more flavor. I agree the flavor is better than the CCELL coils, but both coils are very good. And finally, at the bottom of the tank is the base, which seals the coilhead into place and also houses the airflow and adjustable airflow control ring.

The airflow control ring moves smoothly. There is only one airflow slot, so as you would imagine, this doesn’t have a ton of airflow available. But I would say that it has all that you would need for this type of setup and maybe even more than you’d expect. Wide-open and it lets quite a bit of airflow in. You can get a nice direct lung hit or you can close it down for a tight restricted mouth to lung hit.

There are two different slots built in here too. You can use either the small little airflow circles for airflow or keep turning the ring to use the big wide airflow slot. There’s a lot to like about the Target Mini II. It looks nice, it’s compact and easy to carry around, it’s ergonomic and compatible in either your left or right hand, and the tank works great and has good flavor. There are some drawbacks though, such as the rounded base that makes it easy to tip forward, the somewhat dim screen, and that I can’t get that tank lock off the tank, but other than those things, it’s actually a pretty nice kit. And I love how tiny it is.

This was sent to me for review from Vaporesso and you can get it from them for around $63.00.