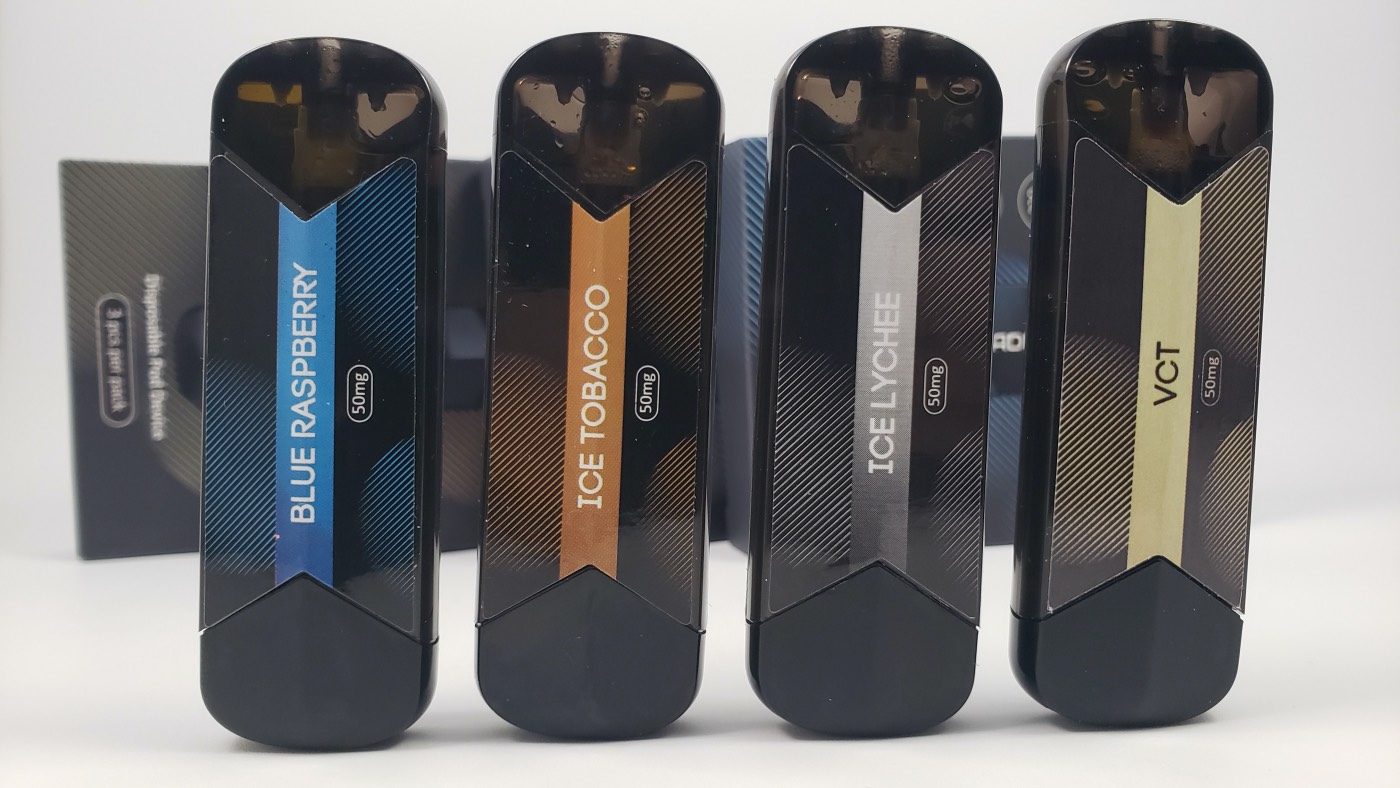 The Vladdin Rio was sent to me for review. Check it out here (affiliate). This is a new disposable pod device from Vladdin. I’m a huge fan of the Vladdin RE device so I figured that if this worked anywhere near as well as that one, then it should be a pretty damn good vape. This has a design similar to other pod devices like the NJOY Ace or Vaporesso Zero. It’s short, wide, and flat, which I think makes it really comfortable to carry around. It’s flat in my pocket and doesn’t take up a lot of space. This is smaller than non-disposables though. It’s really small. I measured it at about 3 inches

I actually really like the style they’ve gone with on these. It looks as fairly well made and stylish for a non-disposable device. The design is just a sticker, so nothing amazing, but it doesn’t look really cheap and ugly, so I like it. At the top is the pre-filled pod, which is not removable since this is a disposable setup. When you first take the Rio out of the package you’ll find a silicone stopper in the tip. This isn’t just a small plug. This is a long stopper designed to completely close off all airflow. That prevents it from pressurizing and leaking while it’s shipping. It’s a little hard to pull out and it might feel like you’ve broken it when it snaps out of the Rio, but don’t worry, that’s how it’s supposed to work. If you can get air through it, you’ve got the plug out.

Inside the pod, Vladdin says that they’re using an organic cotton wick. That’s one of the things I really like about Vladdin. They use really high quality materials. The Vladdin Rio comes in four flavors and only in 5% nicotine. So these are 50mg salt nicotine devices. If you’re not familiar with salt nicotine, it basically lets you vape very high nicotine without the harsh throat hit, which a lot of people find more satisfying, especially people who need more nicotine.

I will say though, that salt nic does have some throat irritation at first, but most people get used to it. I don’t get any irritation from salt nic anymore, but I remember I did a couple of years ago when I first tried it. I don’t know what real lychee tastes like so I can’t tell you how close this compares, but this is really good. It’s a sweet fruity flavor that reminds of something tropical, but maybe closer to something like kiwi. And it has just a hint of menthol. The menthol in here is pretty light so it’s probably more to enhance the flavor. I’m a big fan of vanilla custard tobacco flavors and I think this one competes with the good ones. It tastes just like vanilla custard. It has that rich vanilla bean flavor combined with a light custard. It’s somewhat mild, but that’s a good thing. The flavor comes out really well, but it’s not too rich. I can’t even really taste the tobacco, so if you don’t like tobacco flavors, you’ll probably like this one. This tastes just like a rich tobacco with a hint of menthol. I like the earthiness of the tobacco. I think I would have liked to have this in a non-menthol version, but it’s good. This is very interesting blueberry flavor. I was expecting a typical blueberry e-liquid, but this is richer and earthier. My first thought when trying this was that it’s a dark blueberry. I don’t know if that makes sense to you, but I think it will if you try it. I like this one. It’s sweet and rich and overall pretty good.

The airflow is a tight draw. It’s not extremely tight, but this isn’t something you can get a lung draw on – not even a restricted lung draw. So if you like tight draw, which is what you’d expect from a device like this anyway, you’ll like the draw here. Personally, I really like it.

Now here’s something really interesting – Vladdin says they use USA e-liquids in their pods. And that’s cool, because a lot of devices that come out of China with pre-filled cartridges don’t say where the liquids come from. So in those cases, I assume those are no-name China-made liquids.

I still don’t know which company is making the e-liquids, but knowing their from the U.S. gives me a little more peace-of-mind about the quality of it.

On and Off Switch At the bottom of the device is an on and off switch. Vladdin only mentions that they do this to cut off electricity to the device to conserve battery power while they are in storage or being shipped. But I think it’s also a great safety feature in case that’s something you want. It’s nice being able to completely cut off the power whenever you want.

The battery inside the Rio is a 460mAh battery. You can’t charge this, but it’s important to have a large enough battery in here so that you can be sure you can vape the Rio until the cartridge is empty.

There’s also some concern about the environment when it comes to disposable products like these, since it’s not great to throw batteries into the landfill, but you can recycle batteries like this. Places like Best Buy, Home Depot, and Target have battery recycling bins. So there’s that. The flavors are all pretty good. I liked all of them. I also liked how strong the flavors are. I don’t mean that they’re overwhelming in any way, but that the flavor just comes out well. It’s not muted, which is great to see in a salt-nic pod device.

The airflow is restricted, which I like, there’s an on/off switch, and you get three devices for $15, so I think it’s a good product. I really like it.

This was sent to me for review from Vladdin and you can get them from VladdinVapor.com (affiliate).